The Met Office played a crucial role in the timing of Operation Neptune, which saw troops and equipment cross the English Channel for Operation Overlord and the D-Day landings in Normandy.

Many years on from the landings the UK armed forces are still dependent on weather forecasts when planning manoeuvres and operations. However since the 1940s the technology used has changed practically beyond recognition.

In 1944 critical decisions were made based on weather forecasts compiled using data gathered from air reconnaissance, ship observations (often sent ashore using pigeons), UK observation sites and from the Germans - once the allies broke the Enigma code. All observation sites were manned, as opposed to automated as they are today, and charts were hand drawn every few hours.

The German weather charts were drawn using much fewer observations. National Meteorological Archivist Catherine Ross said: "The Allied charts contain a wealth of observations from across the UK and Europe, by contrast the German charts reveal that they had been unable to crack the Allied codes and as a result there are virtually no observations for the UK and surrounding waters. The difference in the information available to both sides gave the allies a crucial advantage on D-Day."

Group Captain James Stagg, RAF and Chief Meteorological Officer at Supreme Headquarters Allied Expeditionary Force, led a team of meteorologists charged with providing forecasts to the Allied Commanders deciding when to launch the D-Day offensives.  They considered all the elements that would impact operations and drew up a wish list of ideal conditions for the D-Day landings. 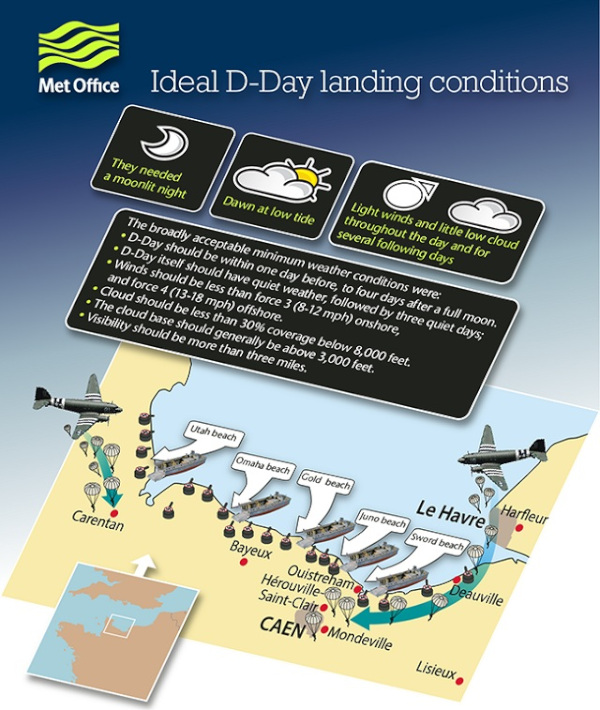 Forecasts from 4 and 5 June were both considered.

When the weather conditions were suitable more than 5,000 ships and 13,000 aircraft supported the D-Day invasion. 160,000 Allied troops landed along a 50-mile stretch of heavily-fortified French coastline to fight Nazi Germany on the beaches of Normandy, France.

Later, Stagg wrote on the bottom of an official report to Eisenhower that had Neptune been delayed until the next suitable tides the troops would have met the worst Channel weather for 20 years. Eisenhower wrote across the memo: "Thanks, and thank the Gods of war we went when we did."

Now Met Office meteorologists use one of the most powerful supercomputers in the world, which can do more than 1000 trillion calculations a second, to help produce forecasts. Our understanding of the atmosphere has improved and faster, more complex forecasts can now be made using hundreds of thousands of weather observations from space, land, sea and air.

The Met Office’s Mobile Met Unit, which supports military operations and exercises, is a sponsored RAF reserve unit made up of Met Office volunteers who have undergone military as well as meteorological training. They travel with the military and give advice on the potential impact of weather on armed operations, helping the Armed Forces understand the impact of weather on military activities and helping keep troops safe.

Simon King was a Met Office meteorologist and also an Officer in the Royal Air Force Reserve having completed tours in Iraq and Afghanistan.

Because of improved science and increased computing power, today's four-day forecasts are as accurate as one-day forecasts were 30 years ago and the Met Office is consistently one of the top two operational weather forecasting services in the world. Forecast accuracy should continue to increase as technology and our scientific knowledge advances.

The weather was considered a matter of national security. For this reason neither side issued public weather forecasts for the duration of the war. However, because the Allies had cracked the German Enigma code, the D-Day forecasters had access to German meteorological observations as well as observations from Allied observers and reconnaissance flights. This is shown on the weather charts held in the Met Office National Meteorological Archive in Exeter.

The German weather charts, recently rediscovered by the German Weather Service (DWD), show the Allied forecasters were at a significant advantage over the German forecasters in terms of being able to spot a suitable weather window for an invasion. Met Office Archivist Catherine Ross explained: "The allied charts contain a wealth of observations from across both the UK and Europe and also some observations from the Atlantic, the area from which the D-Day weather would come. By contrast the German charts reveal that they had been unable to crack the Allied codes and as a result there are virtually no observations for the UK and surrounding waters." 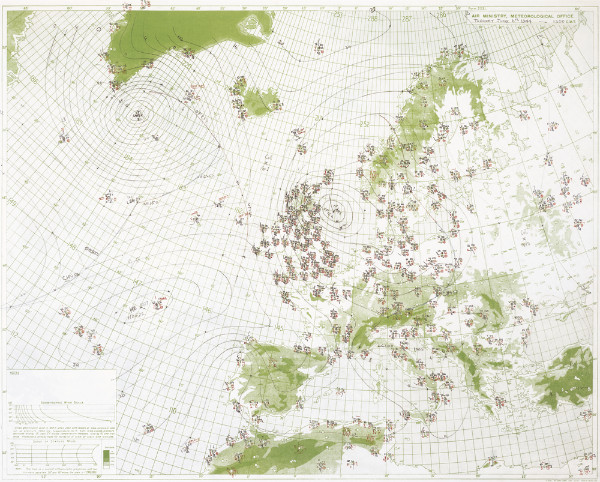 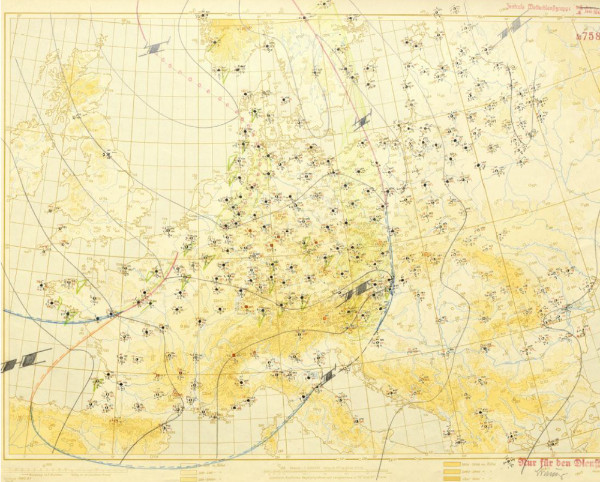 DWD Library Director Dr. Jörg Rapp said: "When comparing the work cards of the Allies it is immediately noticeable that the German side had plenty of weather reports, largely from parts of the European continent and areas under the influence of the then German Empire.  This included information from weather reconnaissance flights and submarines as well as Russian decrypted data. However better meteorological data can be seen, in retrospect, to have given the Allies a decisive advantage."

German forces continued to forecast that the weather conditions should remain unsuitable for an Allied assault. However with access to the additional observation data the allied forecasters had sufficient information to be able to plot the location and movement of a ridge of high pressure over the Atlantic. This enabled them to predict better weather for the following day. Group Captain James Stagg was able to advise that conditions on 6 June would be marginal but sufficient to launch the invasion and in so doing the D-Day forecasters made perhaps the most important forecast in Met Office history.