Melbourne was the setting for a recent Climate Science for Service Partnership (CSSP) Brazil collaboration between researchers from Brazil, the UK and Australia. Myself, Lincoln Alves from Brazil’s national space agency (INPE) and Aurel Moise and Jo Brown from the Australian Bureau of Meteorology spent an intense but very enjoyable two weeks analysing how rainfall variability is expected to change over various different regions of Brazil. This built on previous work that Jo and Aurel had published on changes in Australian monsoon rainfall and was a great opportunity to strengthen links between the three institutes. 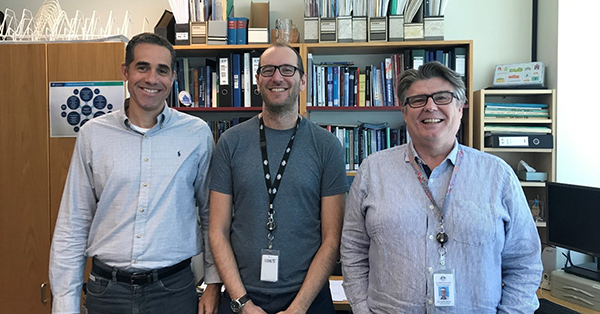 As well as sharing a hemisphere, Brazil and Australia have a lot in common in terms of their weather and climate (and their beach-loving lifestyles)! Both countries are enormous and include a wide variety of different climates including humid tropical monsoons and parched arid regions. Weather and climate extremes are also a constant fact of life in both regions; in a weather brief during my first week in Melbourne the Bureau were monitoring two tropical cyclones in northern Australia, huge forest fires in Tasmania and intense flooding in Queensland, all at the same time.

Rainfall has a strong impact on life in Brazil, with around 70% of natural disasters linked to floods (including flash floods), droughts and landslides, which are often initiated by heavy rain. As well as the risk to life, rainfall variability and change also has an impact on important sectors of the Brazilian economy, such as hydro-electric power and agriculture, and on the health of the Amazon rainforest. Climate change is leading to more intense rainfall around the world and is also likely to lead to longer and more intense drought periods. Our collaborative work aimed to find out what changes in rainfall variability are likely to occur over Brazil.

We used satellite observations of Brazilian rainfall over the last 30 years, combined with future projections from supercomputer climate simulations to show that rainfall variability is likely to increase across all regions of Brazil as our climate warms. This will lead to heavier rainfall when it does rain, but also to more dry spells, and can be thought of as an intensification of the water cycle.

One outstanding question is how the strong influence of El Nino on Brazilian rainfall might change in future. El Nino years tend to bring drought in parts of the Amazon, and excess rainfall in the south-east of Brazil. However, we are currently unsure how this will be affected by climate change, and this will be a focus of future CSSP Brazil collaboration.