From the floodplain forests of the Amazon River to vast networks of lakes, the Amazon basin contains some of the world’s most extensive wetlands. Covering around 2.4 million square miles this ecologically important region is not only home to a diverse range of plants and wildlife, but also provides food and fresh water for millions of people.

Tropical wetlands are also one of the biggest sources of natural methane emissions. As methane is a powerful greenhouse gas that can have a significant impact on the climate, the Amazon basin is a key focus for scientists from the Climate Science for Services Partnership (CSSP) Brazil project, supported by the UK Government’s Newton Fund.

Researchers from the project explain how CSSP Brazil is helping solve a complex greenhouse gas puzzle. 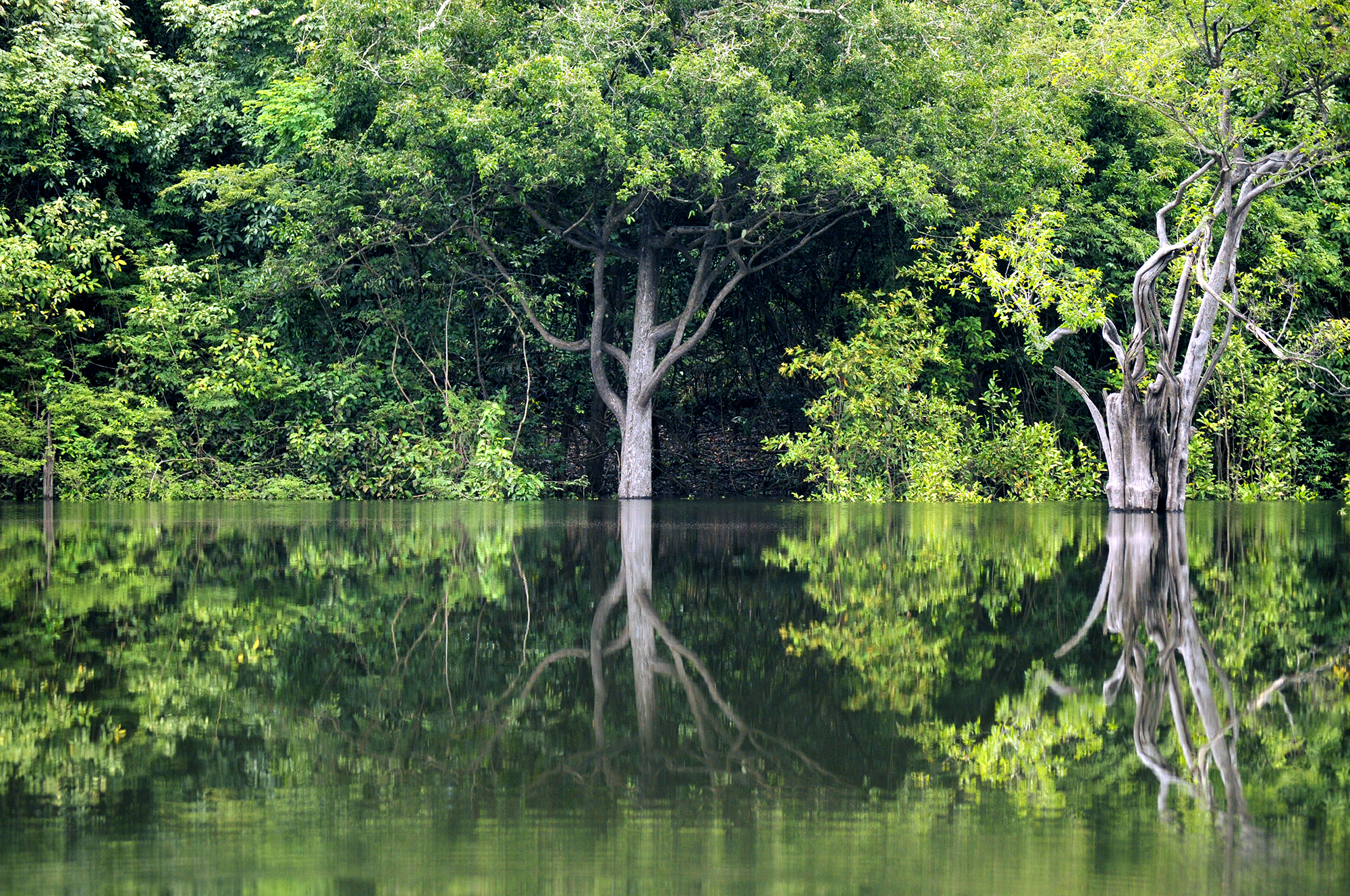 Wetlands cover around 6% of the Earth’s land surface and are natural ecosystems where soils or peats are water saturated or flooded for a large part of the year. Due to the high water levels in these ecosystems, wetlands typically have low oxygen levels which causes the microbes that live in the soil to produce the greenhouse gas methane.

Methane doesn’t just come from wetlands, however. It has multiple sources and in 2020 a team of international scientists published the latest update of the global methane budget, a study supported by CSSP Brazil, mapping all the methane sources around the world.

The study found that around 60% of methane emissions were a result of human activity such as fossil fuel usage, landfill and agriculture. Wetlands made up the biggest source of natural methane emissions.

With higher seasonal temperatures in the tropics, wetlands in these regions are known to have a higher production of methane compared to cooler high latitudes making tropical wetlands an important source to monitor. 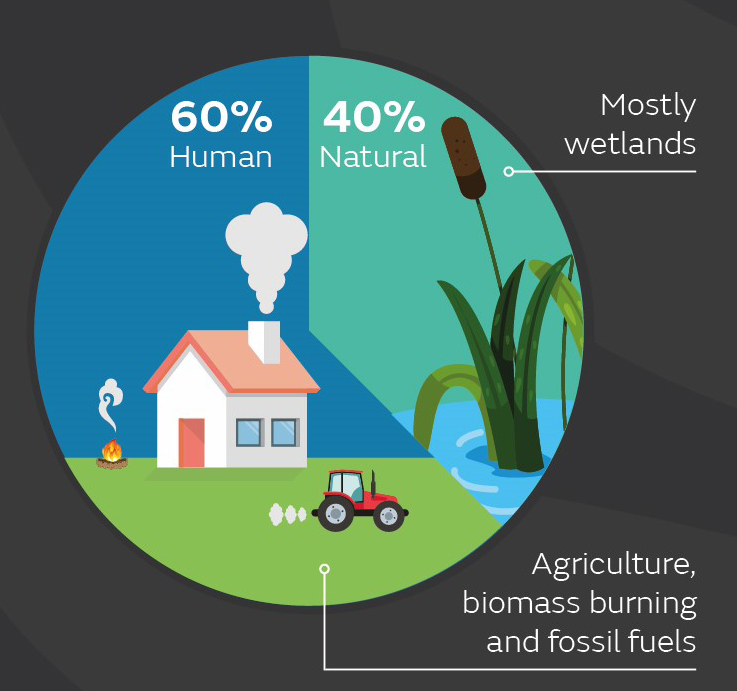 So why is it so important that we monitor methane emissions?

After carbon dioxide, methane is the second most important greenhouse gas contributing to human-induced climate change. Compared to carbon dioxide which lasts in the atmosphere for centuries, methane has a much shorter atmospheric lifetime of around nine years but is a more effective driver of climate change. This means changes in methane emissions can disproportionately influence the climate over the coming decades. Distinguishing between natural and anthropogenic sources is therefore important to mitigating climate change in both the near and long term.

“With increasing atmospheric methane concentrations over the past 20 years, accurately measuring and understanding greenhouse gas emissions from both human activity, and natural wetlands is becoming increasingly important so that we can be fully informed about how to achieve the goals of the Paris Climate Agreement”, explains Andy Wiltshire, Head of Earth System and Mitigation Science at the Met Office.

But measuring methane emissions from wetlands is complicated and it represents one of the biggest uncertainties in the global methane budget.

“The methane produced by microbes is transported to the atmosphere through a range of processes such as gas bubbles, plants and diffusion. These processes vary considerably across small scales and are strongly influenced by a range of factors like temperature making them hard to quantify”, comments Nicola Gedney a climate scientist at the Met Office who is working on the project.

“In addition, their strong dependence on temperature and precipitation means they respond to changes in climate as well as potentially impacting future climate change.”

To overcome these challenges, researchers from the CSSP Brazil project are studying how to improve estimations of emissions from wetlands in Brazil. Over 60% of the Amazon basin is found in Brazil as well as around 80% of the world’s largest tropical wetland, the Pantanal, making it an important region for monitoring natural methane emissions. 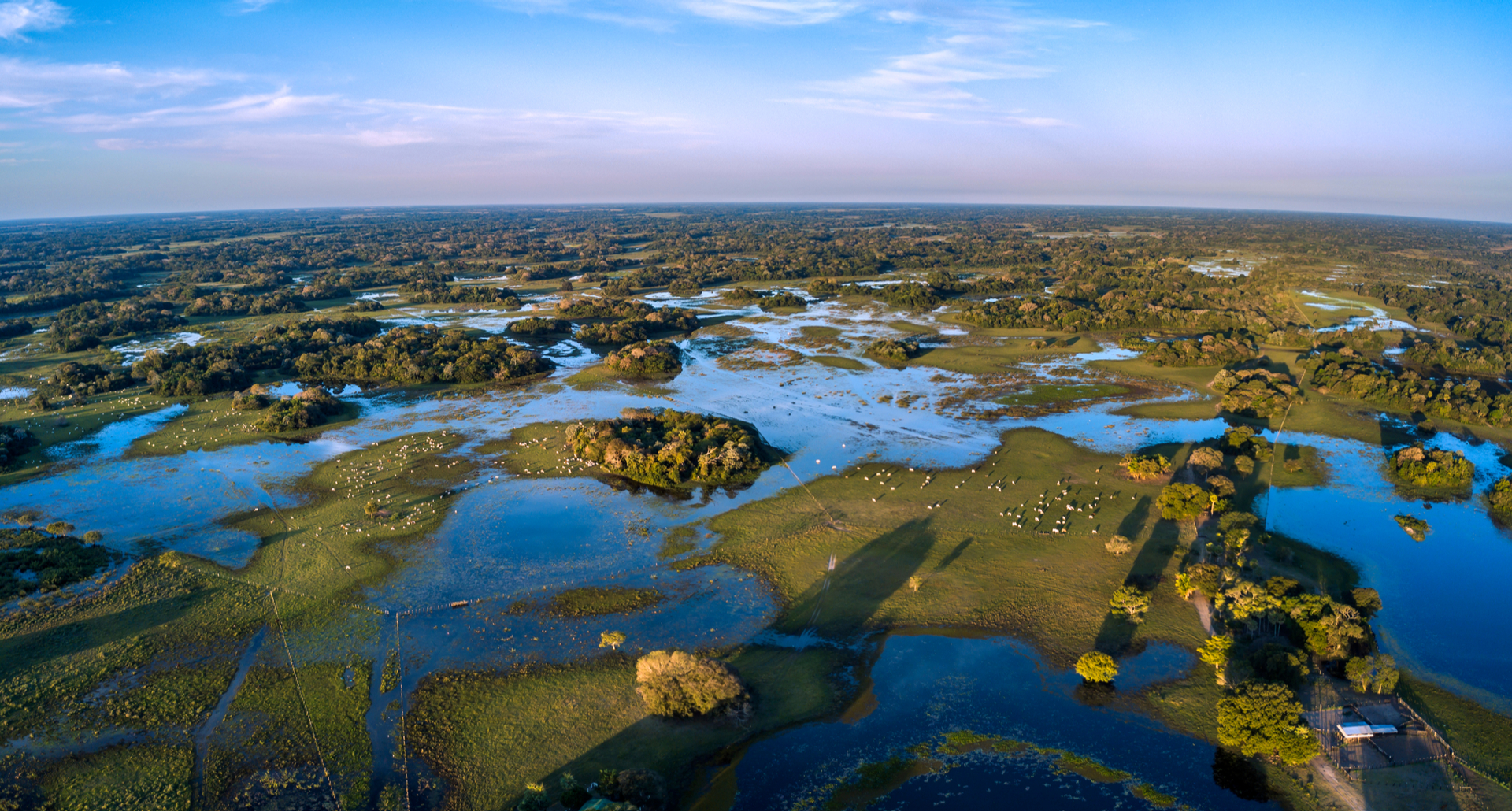 Due to the challenges of quantifying wetland methane emissions, researchers are using a variety of methods including computer models, on-the-ground observational experiments and satellites.

A CSSP Brazil paper led by Rachel Tunnicliffe from the University of Bristol, analysed data collected by the Greenhouse gases Observing Satellite (GOSAT), one of the world’s recent spacecraft that measures the concentrations of carbon dioxide and methane. Although dense cloud cover in tropical areas can make some such measurements challenging, satellites can cover much larger areas compared to surface observations.

The researchers collaborated with Brazilian scientists from the Amazon Tall Tower Observatory project to combine the state-of-the-art satellite data and ground based observations to quantify methane emissions from Brazil.

Study author Anita Ganesan from the University of Bristol commented, “The methods we are developing allow us to better understand emission sources and can help narrow the uncertainties in the reporting required by countries for climate policies such as the Paris Agreement. This analysis is particularly useful in Brazil because of its mixture of natural wetland sources and human-made sources such as cows and landfills.”

The study provided insights into how wetland methane emissions are influenced by the Earth’s climate system. It found wetland emissions increased during the 2015 wet season and at the start of the 2015-2016 El Niño, which is a fluctuation in the Earth’s climate system. This was likely due to increased surface temperatures causing an increase in methane production, rather than changes in flooding.

“These methods also help us understand how emissions from natural sources are evolving in a changing climate” added Anita. 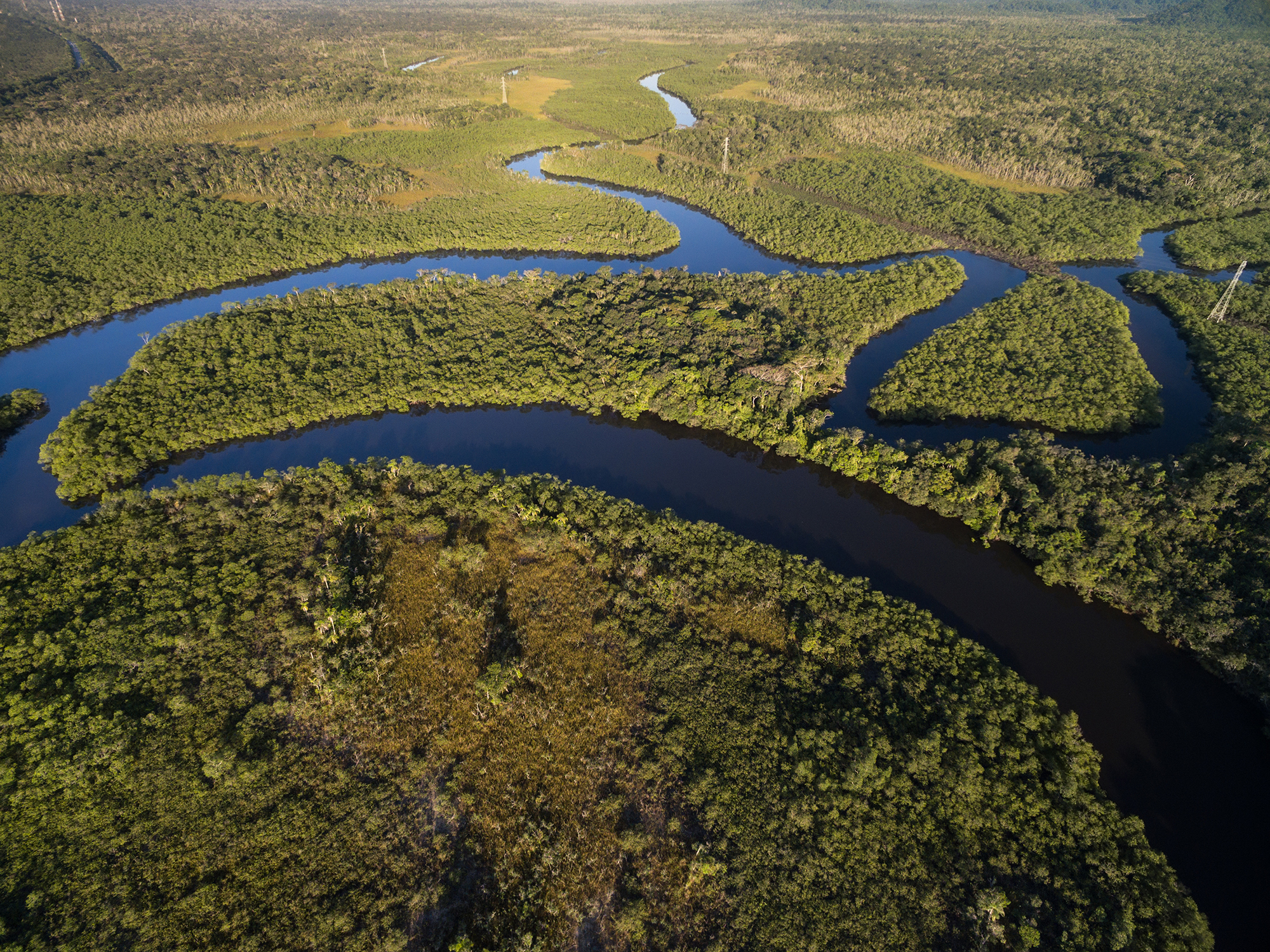 Computer models are another tool for helping us understand how methane emissions may change in the future and are a key resource for informing future climate policies.

The CSSP Brazil team are working on improving how land-surface models simulate wetland emissions. To do this they are continually incorporating new scientific discoveries into the computer models, such as the role of Amazon floodplain trees in transporting around 50% of its wetland methane emissions to the atmosphere. In addition to this, new research led by Professor Vincent Gauci from the University of Birmingham challenges typical assumptions around wetland methane emissions. Through the examination of methane exchange at three tropical locations during different flood conditions, this study has found that methane produced within the soil may be vented to the atmosphere via tree roots even when water levels are below the surface. Scaling these measurements up over all tropical forests with the use of a land surface model, the study estimates that about 15% of the tropical tree emissions occur when the forest is unflooded. This research could therefore have implications for the way methane emissions are quantified and modelled, highlighting the need to consider the importance of these non-flooded ecosystems.

Scientists from the Met Office are collaborating with CEMADEN, Brazil’s national centre for monitoring and early warning of natural disasters. Conrado Rudorff, Research Scientist at CEMADEN explains, “The Climate Science Service Partnership has made possible important projects that are improving the modelling of river flooding and streamflow to understand their role in methane production in Brazil. These projects will not only reduce uncertainty in regional methane budgets but also support predictions related to water resources and flood risk management.”

Improving information about how Brazilian ecosystems might contribute to and be affected by climate change will help inform national climate mitigation and adaptation policy.

Andy Wiltshire commented on the importance of this work. “Brazilian ecosystems play an exceptional role in regulating the global climate system. The advances being made in the CSSP Brazil partnership are helping understand the importance of these ecosystems, their vulnerability to climate change and the crucial role they play in addressing the global climate mitigation challenge. The collaboration between UK and Brazilian scientists is enabling us to jointly address important issues for global well-being.”

CSSP Brazil is developing UK-Brazil science partnerships supported by the UK Government’s Newton Fund, bringing together researchers and organisations from the UK and Brazil to understand the vulnerability of Brazilian ecosystems to climate change and deforestation.