Understanding and modelling fog in India

The Weather and Climate Science for Service Partnership India project is advancing the understanding and modelling of fog formation.

In many parts of the world, fog is a significant hazard causing economic and societal disruption. Fog is notoriously difficult to simulate in weather forecast models and it is therefore difficult to predict hazardous events. Collaborative research through the Weather and Climate Science for Service Partnership (WCSSP) India is progressing both the understanding of the mechanisms of fog formation and the representation of fog in high resolution models.

How does fog form?

Fog is made up of lots of tiny water droplets, formed when air close to the ground is cooled, causing the condensation of water vapour. There are different types of fog, which are typically categorised depending on how the air is cooled. In areas with high levels of pollution, fog can become very thick as pollution particles help the water droplets join together and grow. Dense fog significantly limits visibility, resulting in detrimental impacts on transport, particularly in the aviation and road transport industries. In parts of India, dense fog can occur on over half of all winter days, with particularly bad winters, such as that of 2013-2014, resulting in economic losses upwards of $ 1.5 million. 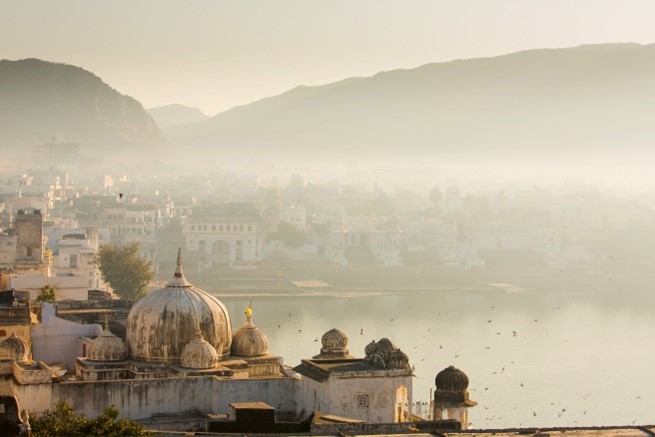 WCSSP India is a collaborative project between the Met Office, other UK institutions and the Indian Ministry of Earth Sciences (MoES) to advance scientific understanding that can be translated into services to protect lives and livelihoods around the world.

Research under this project has studied 20 years of observations to characterise fog occurrence in India and better understand how it forms. This work, among others, finds an increase in the occurrence of fog over the last 30 years, making it even more important to understand the mechanisms behind fog formation and improve forecasts. Some of this increase is thought to be related to the rise in human-emitted aerosols, for example from biomass burning and power plants, in the past few decades. However, in some parts of the country, such as Delhi, new research has found that very high aerosol concentrations can actually limit fog formation. This is thought to occur due to the high number of aerosol particles limiting the amount of water vapor that can be held in the air. Understanding the balance between the role of aerosols in fog formation and fog suppression will have implications for expectations following air pollution reduction targets.

This work has also studied how well fog is represented in urban areas. Experiments using the UK Met Office’s Unified Model have highlighted deficiencies in the way aerosols are currently represented in the model. For example, the amount and type of aerosols are not representative of different regions, which contributes to biases in fog forecasts. In addition, research has found that for modelling fog in urban areas, forecasts are very sensitive to how the land surface is represented, with locally realistic building data required to improve forecasts. Through WCSSP India research, improvements have been made to the way fog is represented in urban areas, resulting in the development of a high-resolution (330 m) visibility and fog forecasting model led by Dr. Jayakumar at NCMRWF in collaboration with the Met Office. The results of the work undertaken so far could help to improve fog forecasts not only in the UK and India but in cities around the world.

WCSSP India scientist Bernard Claxton at the UK Met Office has developed a new scheme to diagnose fog: “The Vera visibility scheme is designed to produce probabilistic output that helps give an indication of how likely the forecast conditions are to occur. The treatment of aerosols in Vera is more sophisticated than previous fog schemes, for example capturing variations in particle size.” This novel scheme has been successfully implemented in the regional UK model at the Met Office, helping to improve fog forecasting.

Close collaboration between scientists from India and the UK has enabled the visibility scheme, initially developed for the UK, to be implemented in an Indian regional model. To achieve this, the visibility scheme required tuning to account for the significantly greater aerosol loading over India compared to the UK. This scheme has been implemented into the Met Office’s Delhi Research UM model and has been used to generate fog diagnostics from a model developed by the Indian Institute of Tropical Meteorology. Implementation in both models allows scientists to compare outputs to help further tune the model. This scheme has been made operational for the 2021 winter season, providing visibility forecasts for Delhi on an experimental basis.

“The visibility forecasts are critical especially for the transportation sector (rail, road, and air) in the northern part of India, as low visibility results in cancellation of flights and increased risk of road and rail accidents. The inclusion of ambient aerosol loading in standard visibility forecasts through VERA helps take into account the aerosol-cloud microphysical interactions in a computationally efficient manner." Says Gaurav Govardhan at the Indian Institute of Tropical Meteorology.

Improvements in the representation of fog in weather and climate models could improve forecasts for this hazard both locally in the UK and India and worldwide. This work is closely aligned to the aims and ambitions of the UN’s Sustainable Development Goals, particularly goal 11 (sustainable cities and communities) and goal 17 (partnerships for the goals).