Understanding the role of climate change in the 2018 Kerala floods

By: Kieran Hunt and Arathy Menon, University of Reading

Research part funded by the Weather and Climate Science for Services Partnership (WCSSP) India project, supported by the Newton Fund and the Indian Ministry of Earth Sciences, has uncovered the role of climate change in the 2018 Kerala floods. The collaborative initiative between UK and Indian research institutes is building strong innovation partnerships to advance scientific understanding. Here, Kieran Hunt and Arathy Menon from the University of Reading give us an insight into their research.

These days, when severe weather causes significant impacts, one of the first questions raised is “did this happen because of climate change?”. Because of the chaotic nature of weather, it is all but impossible to determine whether a single event was caused by climate change. There are, however, experiments that we can do to figure out whether climate change makes a certain type of event more likely, or for a given case, to what extent it has modified the impacts.

Our study explores the second of these options in the context of the Kerala floods of 2018. During mid-August of 2018, a monsoon depression passed unusually far south over the Indian subcontinent. This caused very heavy rainfall when the monsoonal westerlies struck the mountain range that runs along the southwest Indian coast – the Western Ghats. The deluge fell mostly over Kerala, which had been saturated just several weeks earlier from rains associated with another low-pressure system. The reservoirs rapidly hit capacity, dams were opened state-wide, and there was severe flooding. 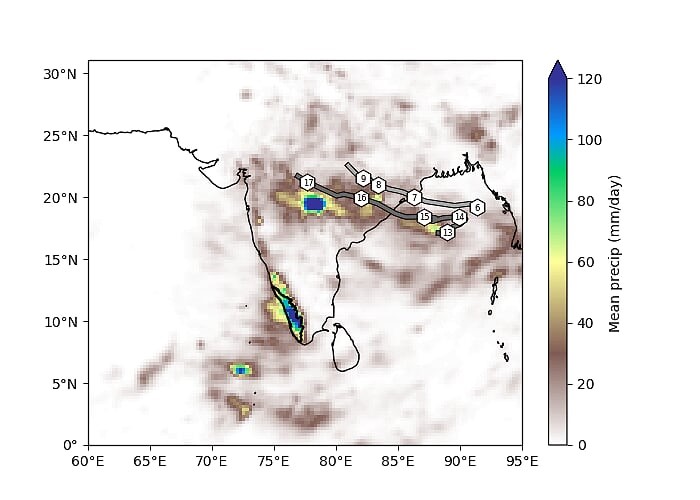 Figure 1: Average rainfall over 15-17 August 2018 (computed using data from NCMRWF). Also shown are the tracks of the precursor low-pressure system (6-9 August) and monsoon depression (13-17 August). The border of Kerala is shown in thick black.

Kerala lies mostly over the ecologically fragile Western Ghats and has a complex topography with the Arabian Sea to the west and mountains to the east. It also receives a large amount of rain with an average of about 300 cm during the monsoon season. About 50 major dams in Kerala provide water for agriculture and hydro-electric power generation. As a result of the torrential rains in August 2018, the authorities had to open the sluices of 35 of these major dams as they reached maximum capacity. 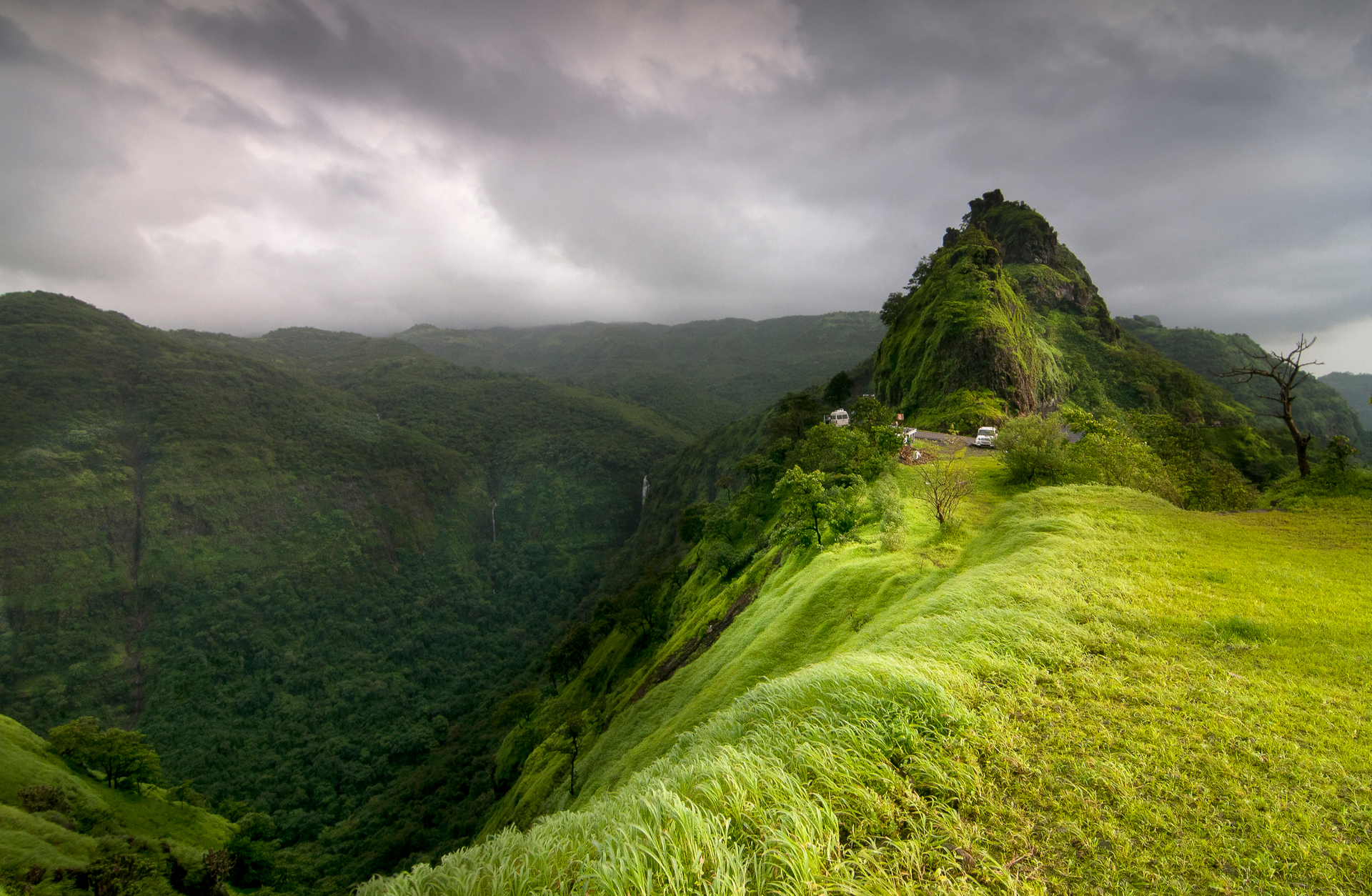 The Western Ghats receives a large amount of rain during the monsoon season.

So, how do we uncover the role of climate change in all this? We set up three experiments, using a technique called “pseudo global warming”. The first, a control, simulated the 2018 Kerala floods as they happened. For the other experiments, we describe what the floods would look like in a climate where no human-induced global warming takes place (pre-industrial), and a climate where much more global warming takes place in a high emission scenario known as the Representative Concentration Pathway 8.5 (RCP 8.5) scenario.

The results showed that the rainfall affecting Kerala during August 2018 would have been 18% greater had human-induced climate change never occurred; in contrast, it would be 36% higher in the 2100 future climate. The first result seems counterintuitive at first glance: the world has warmed considerably since the pre-industrial era, and that warming brings with it a lot of additional moisture, so we would naively expect more rainfall, not less. What’s going on? Well, another result of climate change is a weakening of monsoon depressions – and in this case, that weakening has a stronger effect on the rainfall than the increase in available moisture. This tug-of-war changes hands, dramatically, in the future climate experiment as the moisture increase easily overwhelms the weakened dynamics, which you can see in Figure 2. 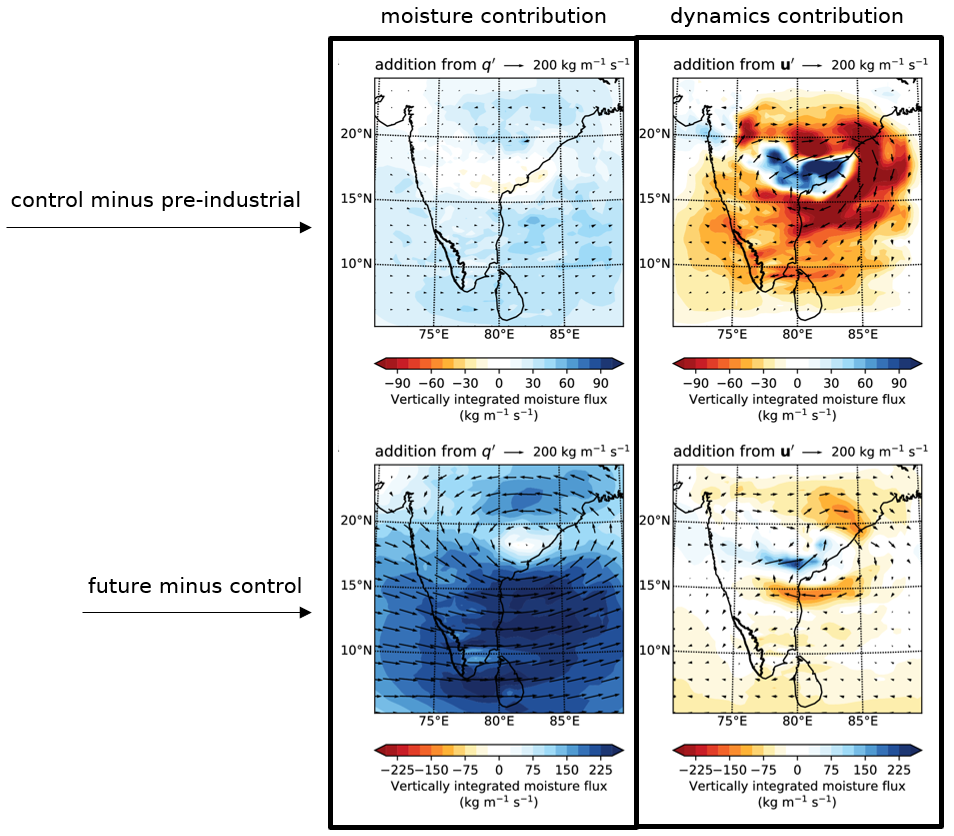 How would this change in rainfall affect the reservoirs and rivers? A full evaluation is beyond the scope of a blog post, but we can focus on the largest dam – Idukki – to give us an idea. Built from nearly 500,000 cubic metres of concrete, the Idukki reservoir is responsible for over a quarter of Kerala’s total freshwater capacity. We found that in the RCP 8.5 end-of-century scenario, the dam would need an extra 59% capacity to contain all the required water to prevent flooding.

Summarising, the 2018 Kerala floods were likely made less damaging by climate change, as global warming has weakened monsoon depressions. However, if they were to happen again in a future climate (RCP8.5) scenario at the end of this century, the effect of increased tropical humidity would far outweigh the weakened depressions, likely resulting in significantly higher rainfall and its associated impacts.

WCSSP India
The Weather and Climate Science for Service Partnership India (WCSSP India) is a research project building and harnessing strong, sustainable science and innovation partnerships between the UK and India. It is a collaborative initiative between the Met Office, supported by the UK Government’s Newton Fund, and the Indian Ministry of Earth Sciences. It is advancing scientific understanding and modelling capabilities that can be translated into services, to protect lives and livelihoods around the world.

INCOMPASS project
Arathy Menon was supported by the INCOMPASS project led by the UK centre for Ecology and Hydrology, which delivered a programme of new measurements over India and the adjacent oceans to advance monsoon forecasting capability in the Indo-UK community. INCOMPASS is a joint Newton-Bhabha project co-funded with the Indian Ministry of Earth Sciences.