Global mean sea level has risen by 3 mm per year since 1993 when the first satellite measurements were recorded. As a result of past and future global warming, mean sea level is expected to continue to rise for centuries, increasing coastal flood risk, particularly in densely populated, low lying regions.

Why is sea level important?

According to the United Nations, ~40% of the world’s population live within 100 km of the coast, with ~10% in regions less than 10 m above sea level, making people and infrastructure vulnerable to coastal hazards. As the climate changes, extreme sea level events previously considered rare are likely to become common by 2100 under all future emission scenarios, according to the Intergovernmental Panel on Climate Change. Higher sea levels increase the baseline water level on which high tides and storm surges are imposed, increasing the risk of coastal inundation and the overtopping of existing defences. In order to prepare for changes to this risk, it is important to have reliable projections of local sea level change to inform adaptation planning.

Increasing global temperatures are causing the world’s oceans to warm and, as a result, expand. This occurs because warmer water is less dense and therefore takes up more room, pushing average sea level up. Thermal expansion accounts for about 40% of the observed global mean sea level rise since the early 20th century. Melting ice sheets and glaciers also contribute to increasing sea levels by adding to the total volume of water stored in the ocean (melting icebergs and sea ice do not contribute as they are already in the ocean). In addition to human-induced climate change, other human activities such as land use change, groundwater mining and river damming influence how much water moves from the land to the ocean.

Sea levels are not expected to change uniformly around the globe, with some areas likely to experience greater sea level rise than others due to local amplification effects. For example, some parts of the world are still rebounding from the historic weight of glaciers during the last Ice Age, known as glacial isostatic adjustment. As a result, land once covered in large glaciers is slowly rising now this weight has been removed, while land which once rose at the edges of those glaciers is slowly sinking, exacerbating overall sea level rise relative to the land surface in these locations. Other local factors such as ocean currents also influence how regional sea level is changing relative to global mean sea level rise.

New research led by Dr Lesley Allison at the Met Office Hadley Centre has explored current and future sea level rise at eight sites around the coast of South Africa. Using tide gauge and satellite observation datasets, this study found sea level rise in recent decades consistent with the global mean rise of ~3mm per year. However, future projections of sea level rise under the low (RCP2.6) and high (RCP8.5) emission scenarios suggest South Africa will experience 7-14% greater increases compared to the global mean sea level due to local amplification. Under the lower emission scenario, sea level is expected to rise by between 0.25 and 0.8 m by 2100, while for the high emission scenario this is expected to increase to between 0.5 and 1.4 m. The findings of this study suggest that both mitigation and adaptation efforts would be beneficial to the South African coastal regions. 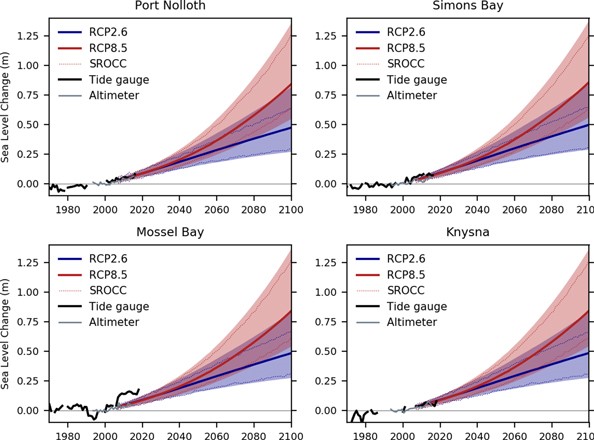 “These new sea level projections will be useful for coastal policy decision makers, but it is important to note that they are based on the "most likely" part of the probability distribution.  There are other processes (such as Antarctic ice cliff instability) that are not included in this analysis, but could theoretically lead to " high-impact, low-likelihood" effects with much larger sea level rise.  For some types of coastal policy decisions, these possible high-end storylines may also need to be taken into account.”, explained Lesley.

One such method for adapting to increased risk from rising sea levels is the development of operational forecasts. According to the Intergovernmental Panel on Climate Change (IPCC), without adaptation efforts, annual flood damages caused by extreme sea level events are expected to increase by two to three orders of magnitude by 2100. To help prepare for these events, Weather and Climate Science for Services Partnership (WCSSP) South Africa scientists have been developing forecasts for coastal overtopping. Advanced warning of hazardous conditions will enable warnings to be issued to decision makers, such as local governments and emergency services, who can then determine whether actions such as evacuations or temporary flood defences are required. Through the development of this forecast, coastal flooding hotspots have also been identified enabling strategic adaptation decisions to be made.

Outputs from WCSSP South Africa support the UN’s Sustainable Development Goals (SDGs). The development of a coastal overtopping warning system particularly supports goal 13 (climate action) and goal 17 (partnerships for the goals). Find out more about how the Met Office supports the SDGs.