How to find us in Exeter

If you are planning to visit us in Exeter find out how below. 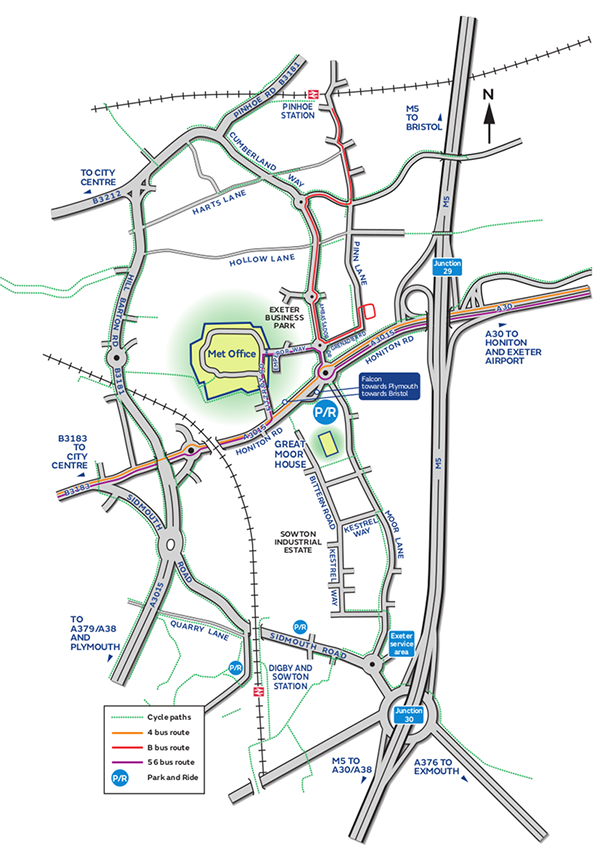 By walking or cycling

Pedestrian/cycle links with safe crossing facilities have been provided from the Met Office site to Honiton Road and Hill Barton Road (adjacent to the site), and to Honiton Road Park and Ride.

Typical walking times and distances from the Met Office site are:

The 56 bus operates approximately hourly from the station and passes through the Met Office site, and continues on to Exeter Airport. Journey time approximately 26 minutes.

The stations closest to the Met Office site are Pinhoe station to the north and Digby and Sowton station to the south. Note: these stations are not serviced as frequently as Exeter St Davids.

Pinhoe can be reached from London Waterloo from the east or Exeter St Davids from the west and south. It is possible to travel direct to Digby and Sowton without changing trains from stations on the Paignton line.

By bus and coach

Travelling between St David’s Station and the Airport use or 56 CONNexeIONS Service. The 56 operates every 30 minutes from Cheeke Street (stop 39) towards the airport. Journey time is approximately 10 minutes. This route also provides a direct service to both Exeter St Davids Station and Exeter Airport. Click here for the 56 timetable.

The 4 service runs every 20 minutes between Exeter and Cranbrook. The 4 departs from the Bus Station (bay 4) and stops outside the Miller & Carter towards Cranbrook, going back to town, use the Park & Ride stop opposite. Journey time is approximately 15 minutes. Click here for the 4 timetable.

At morning and afternoon peak times only, Service L operates an extension to EDF Energy which is a ten minute walk from the Met Office. Journey time is approximately 20 minutes.

Stagecoach operates the South West Falcon which operates a 24 hour coach service between Plymouth, Exeter, Bristol Airport and Bristol City Centre. This serves the Honiton Road Park and Ride stop in both directions. Services run hourly with lower frequently during the evening and overnight.

Timetables, plus maps of bus routes and Exeter city centre bus stops, are available from Stagecoach and on the website or click here for our journey planner.

*Between 06:55 - 09:00, from the City Centre and 15:57-19:00 from Honiton Road Park and Ride this bus is an unlimited stop route. It stops at any bus stop along the route. The service between these times is a limited stop route.

From the north and from the south and west

Take the South West Falcon bus service from Bristol Airport to the Honiton Road Park and Ride stop, from which it is a 10-minute walk to the Met Office. Journey time takes around 1hour 30 minutes to 2 hours.

Alternatively take the bus from Bristol Airport to Bristol Temple Meads railway station. The bus runs every 20 minutes and the journey takes about 25 minutes. Full timetable available at the Bristol Airport website. There are regular trains to Exeter St Davids from Bristol Temple Meads station (about one per hour). Train journey takes about an hour.

The Heathrow Express train departs Heathrow Airport for London Paddington rail station every 15 minutes. Journey time is between 15 and 23 minutes. A typical journey from Paddington to Exeter St Davids takes as little as 2 hours 15 minutes.

An alternative is to get the Railair coach service to Reading, where all the trains between London Paddington and Exeter stop. The service operates every 20 minutes and the journey time is between 40 minutes and 1 hour.

There are about 12 National Express coaches a day between Heathrow Airport and Exeter bus station. The journey time is 3.5 to 4 hours.

Take the train from Gatwick Airport to Reading. This train runs hourly and takes about 75 minutes. From Reading there is a frequent service to Exeter St Davids (journey time about two hours).