A new state-of-the-art radar is replacing the former weather radar at Dean Hill in Wiltshire today. Heavy lifting gear is being used to crane the radar into position on top of its 22 metre tower.

Due to scientific advances the new radar can, for the first time, capture the size and shape of raindrops and snowflakes. This will lead to improvements in accuracy of rainfall estimates, particularly during high impact weather events and is the latest step by the Met Office to upgrade its 30 year old Radar Network. The network is one of the longest established radar networks of its kind in the world and consists of 15 radars across the UK.

The new radar has also begun to capture wind speed measurements. The Doppler technique, using changes in frequency of the radar signal, is used to estimate wind speed and direction when it is raining. 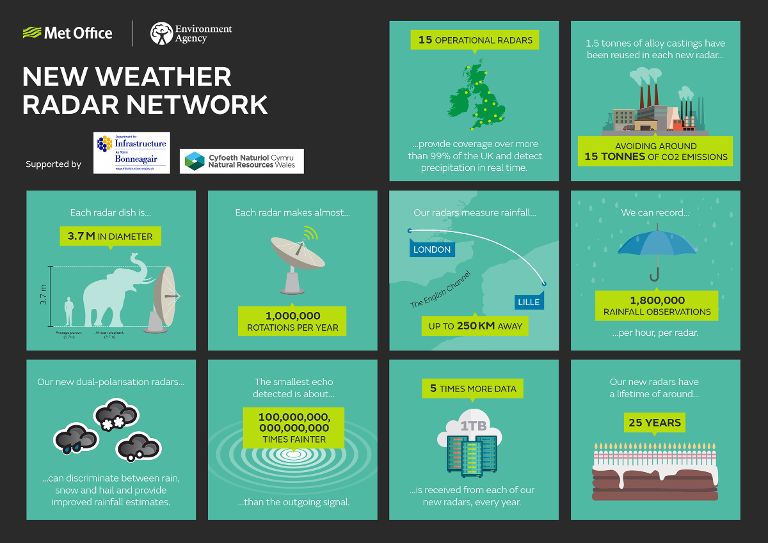 Katie Norman Met Office Radar Products Research and Development Manager says; “Weather radar provides the only means of measuring the spatial extent and distribution of rainfall over a wide geographical area, by observing the atmosphere with high spatial and temporal resolution. The most intense rainfall events are often highly localised and can therefore be missed or under-sampled by rain gauge networks, and whilst their occurrence can be forecast with skill, it is often not currently possible to forecast their exact location. Radar therefore provides a crucial input to short-range weather forecasts (nowcasts) of precipitation rate, and improves the skill of weather forecasts when it is assimilated into numerical weather prediction models.”

Dean Hill was originally opened in October 2005 and was the second radar to be built jointly by the Met Office and Environment Agency, the first being at Thurnham in Kent.  It replaced the Wardon Hill radar, which provided radar coverage for the Portland Naval Base, (which closed in 1996).  Dean Hill represented a much improved location to meet the wider requirements of rainfall monitoring and flood warning.

The upgrade of Dean Hill weather radar is a joint venture between the Met Office Public Weather Service and the Environment Agency. The new radar system was developed in-house by Met Office engineers, combining world-leading hardware with unparalleled levels of skill and expertise.   Wherever possible equipment was sourced locally ensuring the project, while cost effective, also supported the local economy.

The new solution is based on ‘Open System Architecture’, which makes it more flexible than the previous network and more adaptable and easier to upgrade in the future as radar technology continues to develop.

The introduction of this ‘state of the art’ radar technology will help the Met Office to respond to present and future customer requirements. The solution also brought cost-savings as technology was developed in-house and is more efficient to operate.

The Met Office Weather Radar Network Renewal project is ensuring that we continue to play a vital role in providing governments, public and commercial customers with timely and essential weather forecast and real time weather information.