How disease dispersion could affect a staple

Stem rust, named for the blackening pustules that infect plant stems, caused devastating crop epidemics and famine for centuries before being tamed by fungicides and resistance genes.

Since the turn of the century, however, aggressive new strains have emerged – such as ‘Ug99’, first detected in Uganda in 1999 – that infect widely grown varieties of wheat. These diseases threaten to disperse trillions of pathogenic fungal spores on winds across countries and continents.

The fear is that these airborne and highly virulent strains could spread from known sites to some of the world’s most important ‘breadbasket’ regions, such as the Punjab in South Asia, where these strains have not yet been detected.

Now, a team of scientists of the University of Cambridge, the UK Met Office and CIMMYT (International Maize and Wheat Improvement Centre) have adapted modelling systems previously used to forecast, ash dispersal from erupting volcanoes and radiation from nuclear accidents (NAME), to predict when and how Ug99 and other such strains are most likely to spread.

The research, published today in the journal Nature Plants, quantifies the circumstances – routes, timings and outbreak sizes – under which dangerous strains of stem rust pose a threat from long-distance dispersal out of East Africa to the large wheat-producing areas in India and Pakistan. 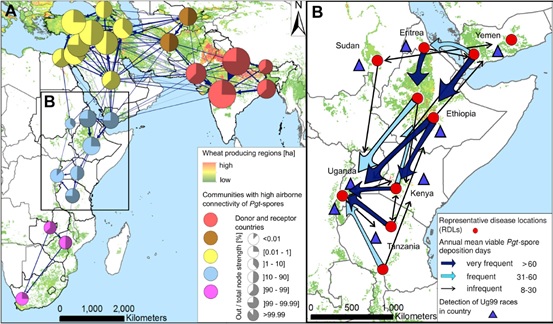 (B) Spore transmission frequencies along principal migration routes in the Rift Valley zone for the scenario of large outbreaks.

The results highlight the role of Yemen as a potential ‘stepping stone’ for the transmission of the disease between continents.  The key scenario for disease spread is from Yemen directly to Pakistan or India.  In case of a large outbreak in Eastern Yemen results indicate a 30 per cent chance for transmission to occur.

Another important scenario for wheat rust to spread is from Yemen through Middle Eastern countries, in particular Iran, to Central and South Asia. If Iran were to suffer a moderate outbreak of Ug99 – on more than 1000 hectares – then spores would likely spread to Afghanistan, and from there potentially further to the northern plains of Pakistan and India. However, transmission along this route is restricted to a relatively short time-window in March and April, before wheat is typically harvested in South Asia.

“New races of wheat rust are threatening wheat worldwide, and we need to know which areas are at risk,” said senior author Prof Chris Gilligan, from Cambridge’s Department of Plant Sciences.

“From our work, we now believe that if we start to see Ug99 or other new wheat rust strains take hold in Yemen in early Spring then action must be taken immediately to mitigate the risk of further spread.”

However, the modelling work also offers some encouraging news: the airborne transmission of the disease from East African countries directly to South Asia is highly unlikely, with transmission events possible only on less than one day a year.

The scientific team used field disease surveys from the International Maize and Wheat Improvement Centre and weather data from the UK Met Office as key input for the modelling framework.

Their modelling framework can be applied as a tool to analyse risks in case new disease strains should be uncovered in other geographic areas. This has already recently helped in estimating dispersal risks from detection sites of related wheat rust diseases in Europe and Siberia. In ongoing work the team is developing an Early Warning System forecasting disease risk in Ethiopia, East Africa’s largest wheat producing country.

“The combined expertise from plant sciences and atmospheric dispersion sciences has delivered ground breaking tools that highlight the risks, and support the management of the devastating potential of these diseases,” said Dr Matthew Hort, co-author from the UK’s Met Office. 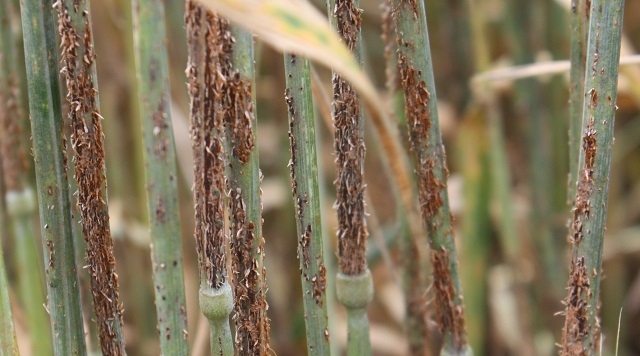