A weekend of sunshine and showers

There’s no Storm Doris but most of us will see periods of wet and windy weather this weekend as typical winter weather continues for the next few days with some cold and frosty mornings too.

A series of low pressure systems created over the Atlantic and directed towards the UK by a strong jet stream are bringing a period of unsettled weather.

Today (Friday) strong winds will impact the south west of England as well as heavy rain, the strong winds will track eastwards and the strongest gusts will then be felt in the south east this evening. It is likely gusts of 40-50mph will occur inland with the chance of 50-60mph and maybe isolated gusts of 70mph in exposed coastal locations. Meanwhile the heaviest rain will move northwards up the Irish Sea, widely bringing 15-30mm of rain to adjacent coastal districts.

Despite much speculation in the media, this low pressure system has not been named Storm Doris and is not going to be.

In between the strong winds and heavy rain there will be interludes of relatively pleasant conditions for many over the weekend, with most areas likely to see some breaks in the cloud and lulls in the wind strength. Some could also see frosty mornings with a possibility of ice and fog if skies remain clear overnight.

Andy Page, Chief Meteorologist, said: “We have not named the low pressure system moving through the UK on Friday and Saturday as its impacts are within what we would expect to see for regular winter weather.

“Although many of us will see showers at times this weekend, with some snow over high ground in the north and west, there will be some spells of more settled weather with pleasant sunshine by day and cold nights. The forecast is constantly being updated so keep up to date with the latest weather forecast and warnings online and on our app.” 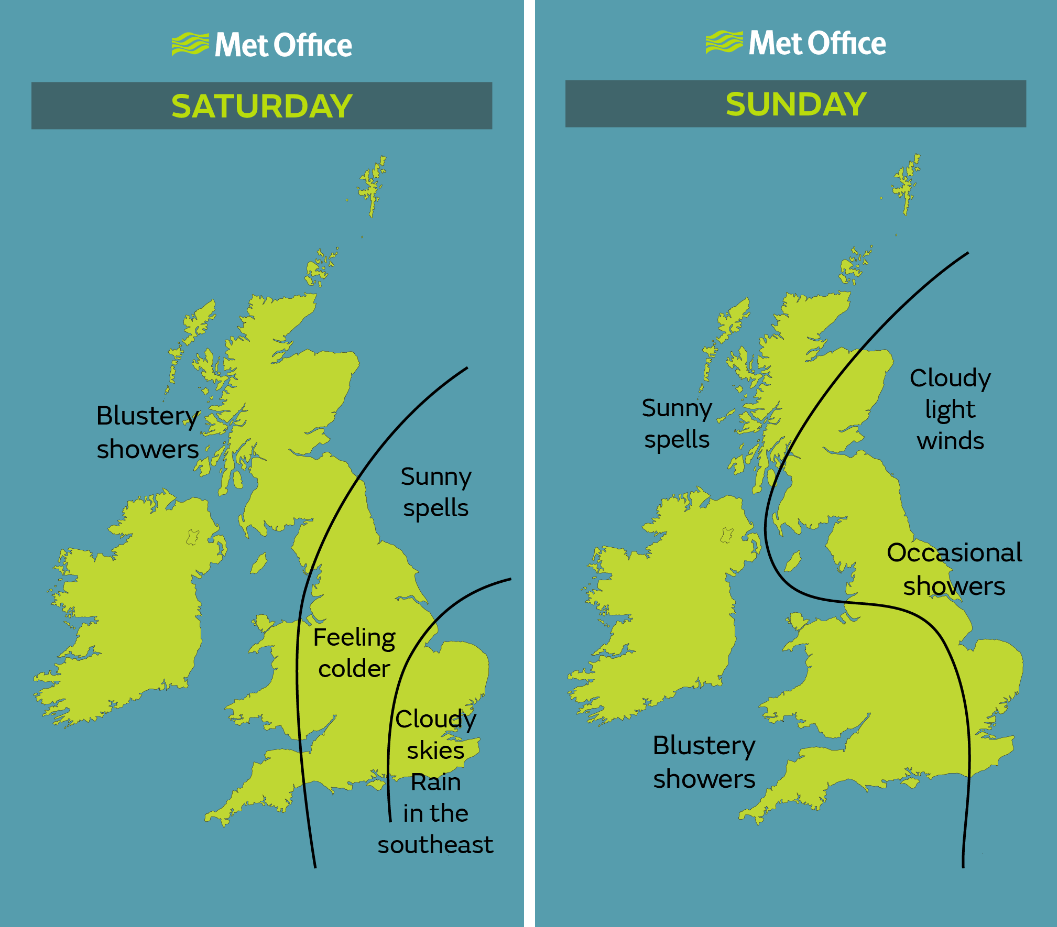 Gareth Morrison, Lifesaving Delivery Manager for the RNLI said: "The water can be unpredictable at the best of times, but it is particularly dangerous during bad weather. We are urging everyone to respect the water and to keep safe during the upcoming rough weather and would remind people not to underestimate the distance waves can travel up the beach or harbour wall. Although it can be tempting to get close, it isn’t worth risking your life to take photos or to dodge waves.

"If you plan on going out walking this weekend, be wary. High winds and big waves change our landscape through coastal erosion so pay attention to warning signs, and don’t leave designated paths to look over the edge of clifftops."

RAC Traffic Watch spokesman Rod Dennis said: “Anyone travelling a serious distance in the south of the UK and driving on more exposed routes should expect strong, gusty winds on Friday. Reduce your speed, be extra vigilant of other road users and be particularly careful when overtaking high-sided vehicles, as you can buffeted off course.

“Standing water also represents a serious risk to drivers. The golden rule is if you don’t know how deep the water is, do not attempt to drive through it. Where possible we recommend avoiding pools of water on the road altogether to cut the risk of aquaplaning.

“Modern vehicles are better equipped to deal with bad weather than ever before, but they are still by no means water proof. You are risking expensive damage, and putting yourself and passengers at risk, if you drive into water that is of an unknown depth.”

Looking further ahead into the beginning of next week, a frontal system will move eastwards across the country bringing further wind and rain. This will ease midweek before slowly returning westward, allowing much colder conditions to spread at least into eastern areas later in the week, however details may change over the coming days.

Keep up to date with the weather using our forecast pages and by following us on Twitter and Facebook, as well as using our new mobile app which is available for iPhone from the App store and for Android from the Google Play store. Search for "Met Office" in store.