Can hay fever really spread from person to person?

A fifth of us think so. We debunk popular myths around hay fever ahead of the Bank Holiday weekend.

You can now get pollen ‘push’ notifications via the Met Office mobile app to alert you when the pollen count is moderate or above to help sufferers manage their condition.

We all like to think they know a thing or two about the weather, but when it comes to awareness about pollen allergies, knowledge levels are surprisingly low, according to a new survey from the Met Office.

In a poll of 2,000, a fifth admitted they didn’t realise that a runny nose and the sniffles were common symptoms of hay fever. Even more amazingly, a fifth also showed they were equally uncertain about how hay fever is caused, believing it is transmitted from one person to another like the common cold. 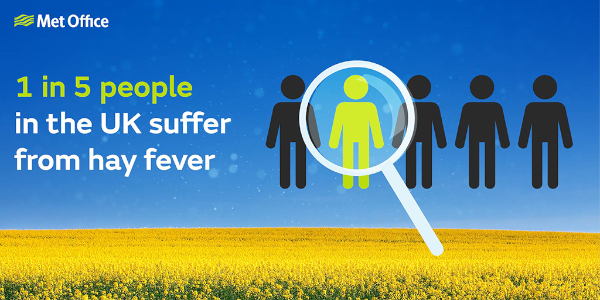 When asked how best to deal with hay fever, 1 in 5 said it was best to keep all windows open to let clean air in, with another 20% claiming that symptoms will ‘worsen’ if they stayed indoors. When asked to identify the main types of pollen in the UK, many identified bogus allergens as being real. A third (32%) identified ‘bird’ and ‘farm’ pollen as legitimate allergens, with a fifth identifying ‘bee’ pollen as another type. In reality, tree, grass and weed are the three main types of pollen in the UK – each with its own season from January to November.

We have joined forces with Lloyds Pharmacy to provide guidance on how hay fever sufferers can stay ahead of potential symptoms this bank holiday weekend.

Francesca Brenca, Pharmacist at Lloyds Pharmacy, comments: “It’s remarkable how little is still known about hay fever, particularly as millions of people now suffer from pollen allergies in the UK. That said, we know that symptoms can be deeply unpleasant for sufferers once they begin. The Met Office’s pollen network and forecast is critical in helping us identify when increased pollen levels are going to occur, which in turn, helps us provide information to our customers that suffer from pollen allergies and ensure our stock of relevant tablets and other remedies are available to ease those symptoms.” 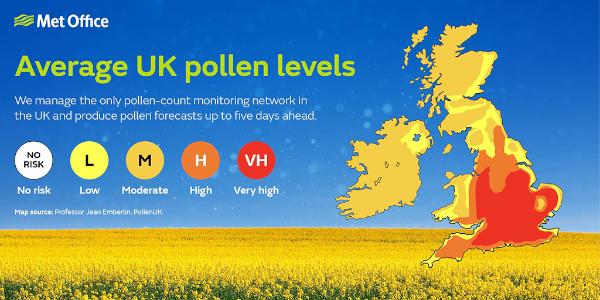 The Met Office’s Yolanda Clewlow, Manager of the UK pollen network, comments: “In conjunction with the National Pollen and Aerobiological Research Unit, we operate the only UK-wide pollen network, providing expert daily pollen forecasts to help hay fever sufferers prepare against potential allergic reactions. New to our mobile app are pollen ‘push’ notifications, which alerts users every morning when the pollen count is moderate or higher. This helps hay fever sufferers to respond accordingly by taking medication or modifying their exposure to pollen, helping to manage their condition before symptoms even begin.” 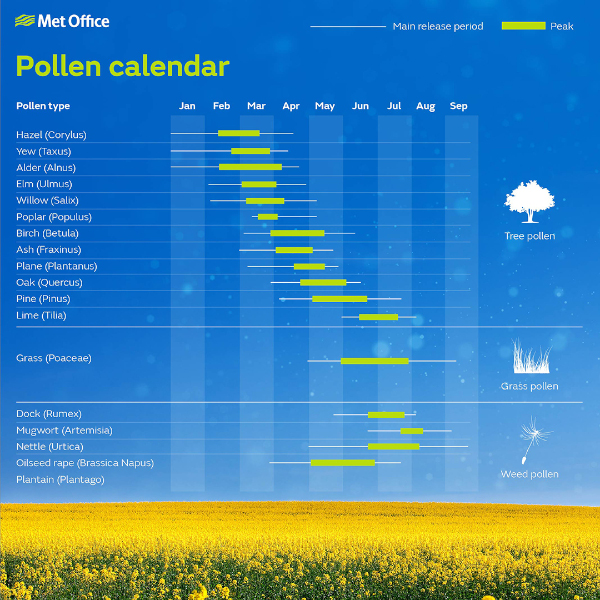 What other bizarre myths exist around pollen and hay fever in the UK?

A pescetarian diet will help reduce symptoms of hay fever

Tree pollen dispersal is highest when it rains

Pollen can affect your mood and personality

There is more pollen in the countryside than urban area

How to combat hay fever this weekend, as advised Lloyds Pharmacy:

If you suffer from hay fever and want to check if the pollen count is high, why not check out the Met Office’s dedicated pollen forecast (www.metoffice.gov.uk/public/weather/pollen-forecast). To receive pollen ‘push’ notifications, download the Met Office mobile app and receive automatic updates on the latest pollen count when its moderate or higher (download from the iOS App store or the Google Play store).

Research conducted by Atomik Research on April 22 among 2,000 people living in the UK – 1,000 with hay fever sufferers and 1,000 general populous.