Up to 11 million British families are planning a last-minute getaway this bank holiday weekend.

Millions of British families are to make a last-minute getaway this weekend, with 58% of respondents revealing plans to holiday in the UK for the bank holiday.   The warmer UK weather has led to a big increase in domestic vacations in 2018 compared to 2017, with half (50%) choosing to holiday in the UK, rather than travel abroad.  Three-quarters (75%) of families are planning a belated UK holiday in the next three months.

The August bank holiday represents the perfect opportunity for Brits to get away before the end of the summer, and based on data from the families and households 2017 Office for National Statistics (ONS), it’s prompted 11 million families to consider a last-minute getaway in the UK this weekend, according to new research from the Met Office.  The infographic below unveils the warmest and sunniest holiday locations in the UK this summer, based on data from the nearest weather sites to popular holiday destinations. 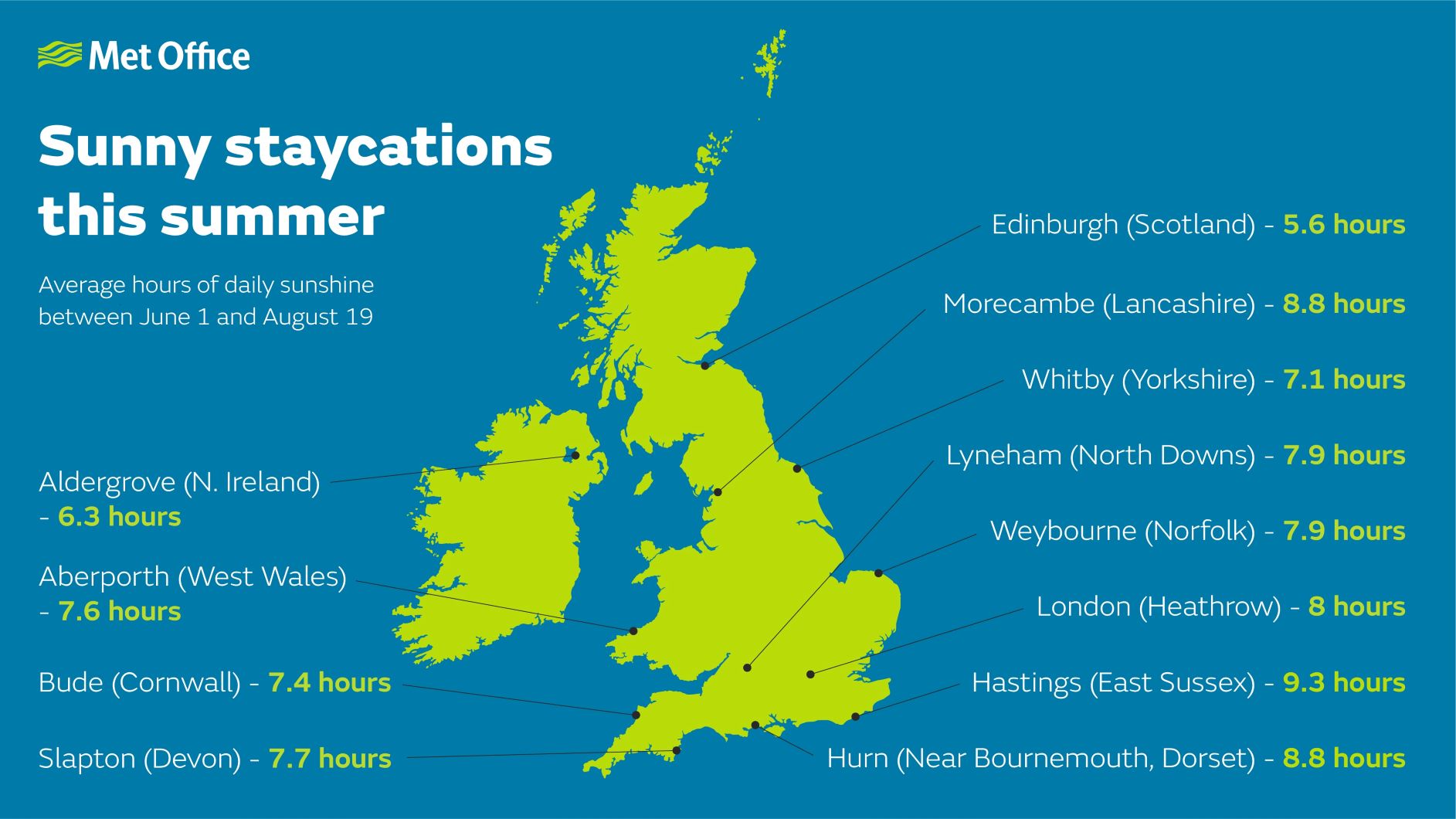 The warm and sunny weather so far this summer has led to an increase in the number of people taking UK holidays, compared to 2017, with almost a third (30%) taking up to two last-minute breaks in the UK already in 2018. However, with three-quarters (75%) of families planning a belated staycation in the next three months, the numbers are anticipated to grow even more, which is positive news for the tourism industry across the UK.

Helen Chivers, Head of News and Social Media at the Met Office, comments: “One of the main reasons respondents said they holidayed abroad was for the sunny weather. However, this year the summer (June, July and August) is shaping up as one of the warmest on record for the UK, which seems to be why more people are taking last minute trips and choosing staycations over vacations”.

“This summer’s heatwave conditions have been down to a number of factors, one of the main ones being the position and strength of the jet stream. This allowed high pressure to dominate the UK weather leading to very warm, dry and sunny conditions; perfect for a holiday at home.”

After the third-warmest June and second-warmest July in our official national records dating back to 1910, this year is currently vying with the current record holder, 2006, as the warmest summer on record for mean temperature (which includes both day and night temperatures). The mean temperature for this summer so far (June, July and the first half of August) is currently at 16.1 °C – that’s exactly the same at this point in August of the record-holding summer of 2006. The final figure for 2006 was 15.8 °C.

Even if temperatures are around or below average for the last week of the meteorological summer (through to the end of August), this year is likely to finish in the top five.

When it comes to the perfect holiday temperature, the research revealed that the average British holidaymaker likes a warm 27 °C , with two-fifths (41%) often opting to travel abroad to get it. But with 193 days of 25-30 °C degrees temperatures totalled across 14 of the UK’s warmest hotspots this summer, a staycation has proved just the trick for many, with the prolonged hot weather prompting 50% of British holidaymakers to cancel plans abroad to take a domestic vacation instead.

Of popular  holiday locations in the UK so far this summer, Cirencester in the Cotswolds recorded the largest number of ‘warm weather days’, with 32 days of 25-30 degree heat. This was followed by St James’ Park in London, which enjoyed 30 days of temperatures between 25-30 °C. Shoreham-by-Sea in West Sussex, completed the top three, recording 23 days of 25-30 °C temperatures.

Average hours of sunshine for popular staycations this summer (between June 1 and August 19):

2= Hurn (Near Bournemouth, Dorset) – averaging 8.8 hours of sunshine per day

4. London – averaging 8 hours of sunshine per day (based on Heathrow observation station)

Research conducted by Atomik Research on August 18 among 2,000 families living in the UK.