Unseasonable weather on the way

An unseasonable area of low-pressure will bring bouts of heavy rain and strong winds to large swathes of England and Wales on Friday and Saturday.

Ahead of the arrival of the low-pressure system from Friday afternoon, most of the UK will be affected by periods of heavy rain, which could lead to local impacts. A yellow rain warning has been issued for most of the UK – except the far north-west and south east of Britain. This warning is in place for 24 hours from midnight tonight. In the worst affected regions, including parts of northern Scotland, communities may see 40-60mm of rain during the warning period, with 10-15mm of rain expected widely.

The Met Office has issued two yellow wind warnings. The first warning beginning at 15:00 on Friday covers West Wales, Devon & Cornwall and the Channel coast as far east as Worthing. As the low-pressure system begins to move eastwards a second warning will come into force for all-day Saturday, covering the whole of Wales and southern and central England as far north as Blackpool, Huddersfield and Grimsby. Parts of northern England, southern and eastern Scotland and Northern Ireland are expected to see thunderstorms developing through Saturday and lasting into the first part of Sunday. A yellow warning is in force all day on Saturday until 6am on Sunday morning.

Neil Armstrong, Chief Meteorologist at the Met Office said: “This low-pressure system will bring challenging conditions, including unseasonably strong winds and heavy rain, from the west during Friday and Saturday. Summer storms - compared with those in autumn and winter - always have the potential to create additional impacts because more people are likely to be outdoors, especially by the coast. Additionally with trees in full leaf they are more vulnerable to being brought down by strong winds.” 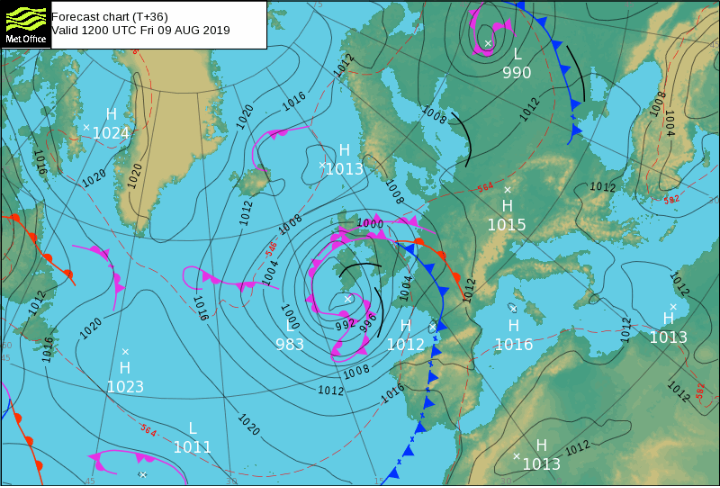 Commenting on the road conditions for motorists during the period, Highways England’s Head of Road Safety, Richard Leonard, said: “We’re encouraging drivers to check the latest weather and travel conditions before setting off on journeys and consider if their journey is necessary and can be delayed until conditions improve. If you do intend to travel, then plan your journey and take extra care, allowing more time.

“In high winds, there’s a particular risk to lorries, caravans and motorbikes so we’d advise drivers of these vehicles to slow down and avoid using exposed sections of road if possible.”

With many people expected to head to the coast, Ross Macleod, RNLI Respect the Water campaign manager, added: “If you’re heading to the coast, beware of large waves and stay away from the edge – even from shore, large breaking waves can sweep you off your feet and drag you out to sea. Check your surroundings – storms can change the landscape of some beaches, changing or damaging access points.

“If you find yourself in difficulty in the water, remember to relax and float on your back – this will give you a chance to regain control of your breathing. If you see someone else in danger, never enter the water yourself as you could end up in trouble too. Call 999 or 112 and ask for the Coastguard. If there is something buoyant nearby, throw that to the person to keep them afloat until professional help arrives.”