New analysis shows the summer seasonal temperature recorded across Europe in 2021 would have been impossible without human induced climate change.

The summer of 2021 was Europe’s hottest on record with temperatures close to 1°C above the 1991-2020 average. To assess the impact of climate change on these high seasonal temperatures, scientists used a large collection of computer simulations to compare the climate as it is today, with about 1°C of global warming, with the climate as it would have been without human influence, using the same methods as in past peer-reviewed studies.

The calculations showed that the record-breaking summer season in Europe would have been almost impossible without human influence with a return time of thousands of years. In the present climate it has an estimated return time of around three years and by the end of the century the conditions could be seen every year. The study used a medium emissions scenario (SSP 4.5) for the future projections of climate change.

Met Office climate attribution scientist, Dr Nikos Christidis, who led the analysis, said: “This latest attribution study is another example of how climate change is already making our weather extremes more severe. Our analysis of the European summer of 2021 shows that what is now a one in three-year event would have been almost impossible without human induced climate change.”

During this record-breaking hot spell, a new European maximum temperature record was set in Syracuse, Sicily, where temperatures reached 48.8°C, beating the previous European high of 48°C recorded in Athens in 1977. 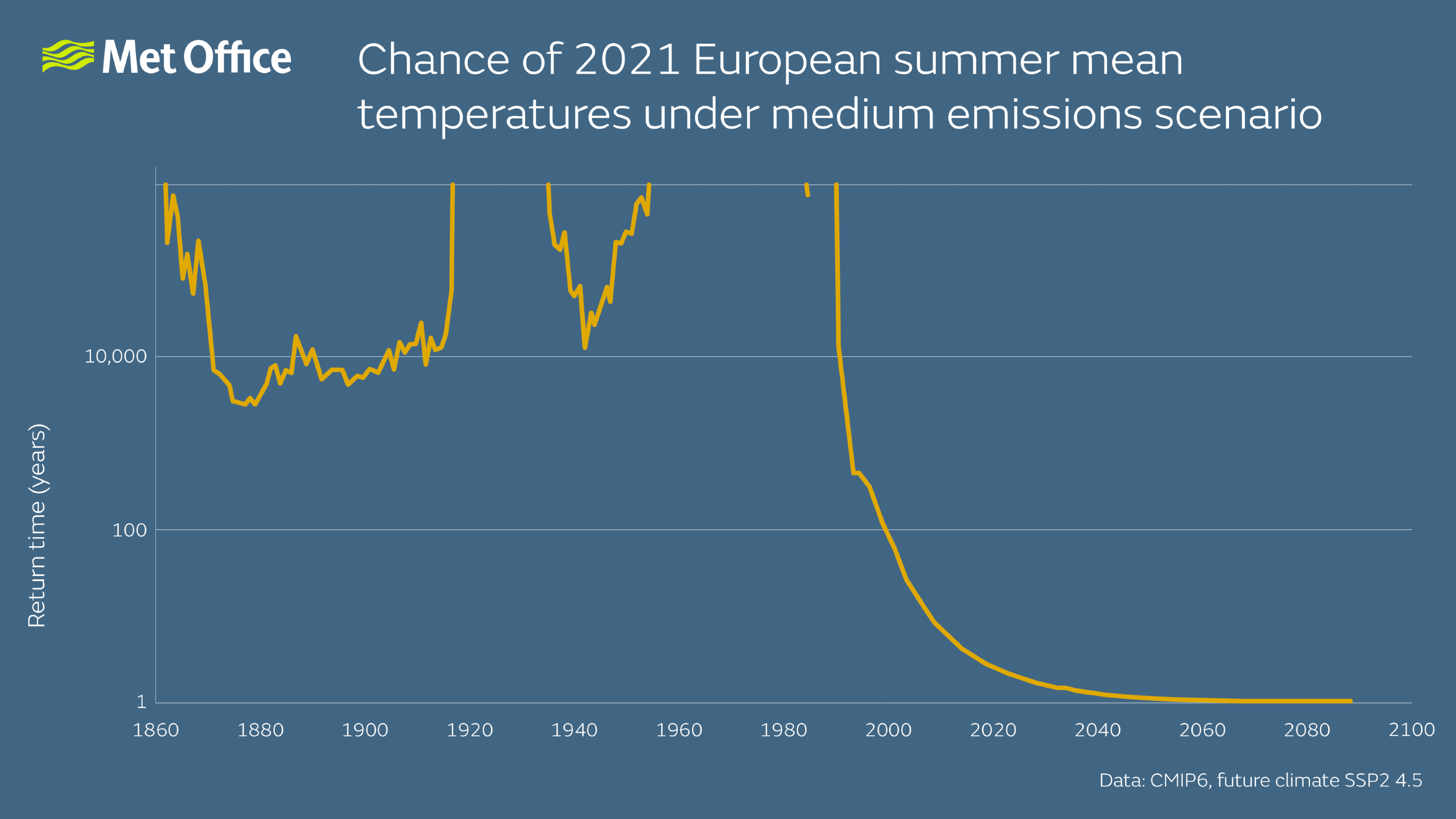 The research conducted by scientists from the Met Office Hadley Centre is featured in a BBC Panorama documentary examining the link between extreme weather around the world and human induced climate change. Science Fellow in Climate Attribution at the Met Office Hadley Centre, Professor Peter Stott, was interviewed on the programme which airs at 19:30 on 3 November on BBC1. Professor Stott added “We can be more confident than we've ever been about linking extreme weather events to climate change. The increasing chances of these extreme events continue to rise as long as we continue to emit greenhouse gasses. The science is clear that the faster we reduce our emissions of greenhouse gasses, the more we can avoid the most severe impacts of climate change.”

The new analysis comes as leaders and policy makers from across the world come together for negotiations at COP26 in Glasgow. All Met Office events at the COP26 Science Pavilion will be streamed through our Science and Services YouTube channel. You can subscribe and sign up for notifications from the channel so you don’t miss a thing. The full programme of events being hosted at the Science Pavilion is on our COP26 event page.