There is more than a 40% chance that the annual average global temperature in at least one of the next five years will temporarily reach 1.5°C above pre-industrial levels.

And these odds are increasing with time, says a new climate update published today, led by the UK Met Office and issued by the World Meteorological Organization. The Global Annual to Decadal Climate Update spans 2021-2025.

Professor Adam Scaife is the head of seasonal to decadal prediction at the Met Office. Commenting on the update, he said: “Assessing the increase in global temperature in the context of climate change refers to the long-term global average temperature, not to the averages for individual years or months. Nevertheless, a temporary exceedance of the 1.5 degree level may already be seen in the next few years.”

The Paris Agreement seeks to keep global temperature rise this century well below 2.0°C degrees Celsius above pre-industrial levels and to pursue efforts to limit the temperature increase even further to 1.5°C. The update also identifies the 90% likelihood of at least one year in the five-year period becoming the warmest on record, dislodging 2016 from the top ranking.

Other highlights from the update include the likelihood of high-latitude regions and the Sahel – the region of Africa immediately south of the Sahara desert - becoming wetter. And there is an increased chance of more tropical cyclones in the Atlantic compared to the recent past (defined as the 1981-2010 average). The Met Office’s Dr Leon Hermanson said: “These predictions provide a basis to alert governments and aid agencies to regional climate risks.” 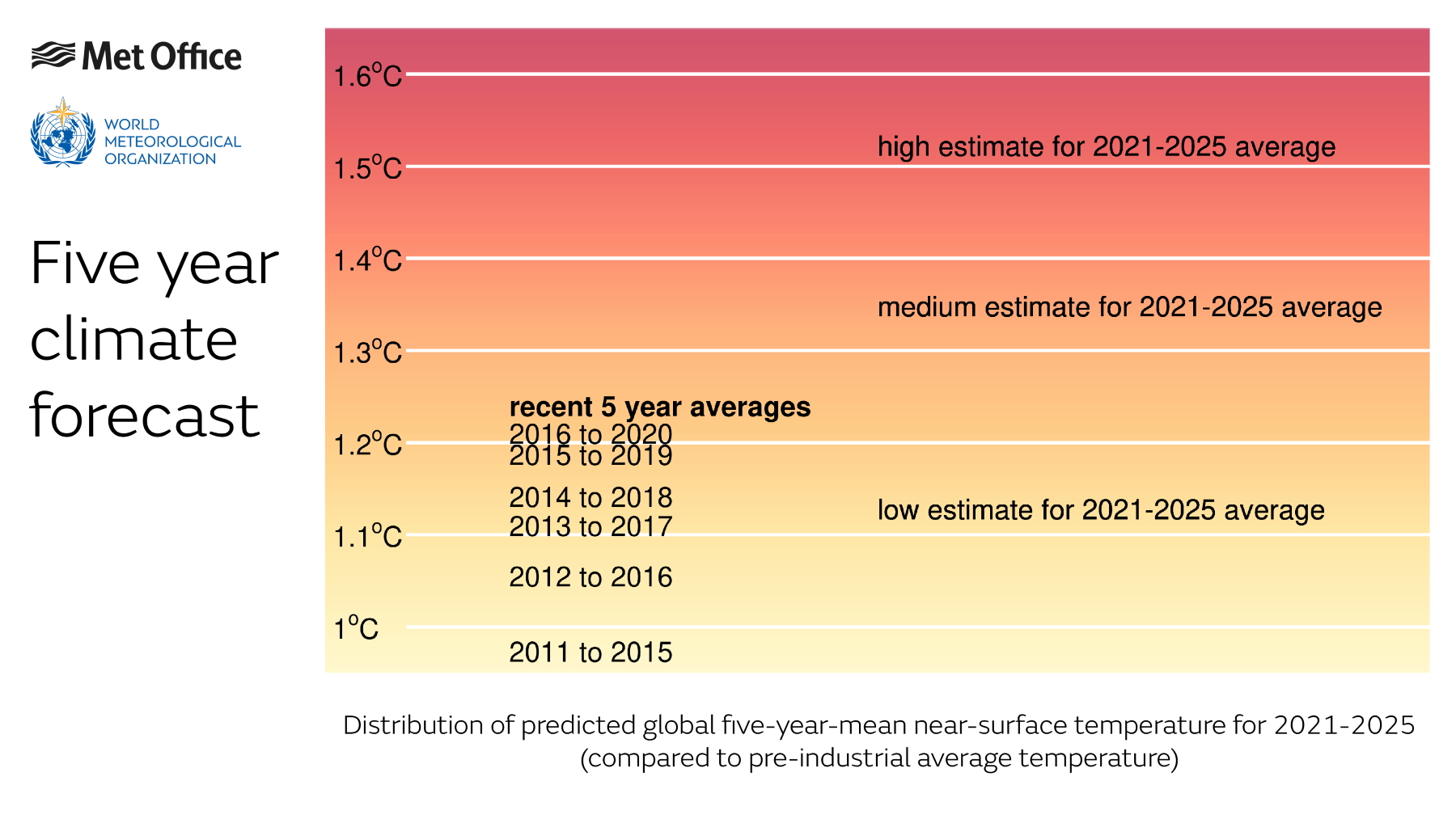 The climate update, which is produced annually, harnesses the expertise of internationally-acclaimed climate scientists and the best prediction systems from leading climate centres around the world to produce actionable information for decision-makers.

In 2020 – one of the three warmest years on record – the global average temperature was 1.2 °C above the pre-industrial baseline, according to the WMO’s report on the State of the Global Climate 2020, released in April. It highlighted the acceleration in climate change indicators like rising sea levels, melting sea ice, and extreme weather, as well as worsening impacts on socio-economic development.

The Global Annual to Decadal Climate Update confirms that trend. In the coming five years, the annual mean global temperature is likely to be at least 1°C warmer - within the range 0.9°C – 1.8°C - of pre-industrial levels.

The chance of temporarily reaching 1.5°C has roughly doubled compared to last year’s predictions. This is mainly due to using an improved temperature dataset to estimate the baseline rather than sudden changes in climate indicators. It is very unlikely (10%) that the five-year mean annual global temperature for the entire 2021-2025 period will be 1.5°C warmer than preindustrial levels, according to the climate update.

The Global Annual to Decadal Climate Update takes into account natural variations as well as human influences on climate to provide the best possible forecasts of temperature, rainfall, wind patterns and other variables for the coming five years.

The development of near-term prediction capability was driven by the WMO co-sponsored World Climate Research Programme, which declared it as one of its overarching Grand Challenges.