A new study projects that summers across the continent will become drier for most of Europe through the century. Furthermore, human induced climate change is expected to increase the frequency of extremely dry conditions across all of Europe.

Dr Nikos Christidis and Professor Peter Stott of the Met Office Hadley Centre assessed how human-induced climate change has influenced the trend of wet and dry summers in Europe and looked at water availability and rainfall across north and south Europe by the end of the century.

The study analysed not only summer trends and extreme events through modelling rainfall changes, but also considers the effect of temperature warming via changes in evapotranspiration, following SSP2 4.5, a medium emission scenario. Published in Science Bulletin, the results provide insight as to how communities will need to adapt as they prepare to see deficits in water availability and heatwave-related droughts.

Dr Christidis explains “We are expecting to see significant changes in European summers as a result of human-induced climate change. Summers may become a lot drier and this shift is expected to become more prominent as we move through the century.”

The same expectations are found for the UK, where a shift to drier summers is also projected.

The only places where the chance of wetter summers remains through the next century were Scandinavia and the Alps. A net decrease in water availability across Europe poses challenges to all regions.

Perhaps the most striking finding of all is under the medium emissions scenario (whereby rainfall and temperature were modelled), there would be a move to a new climatic regime across northern and southern Europe where both regions would see an increase of the frequency of extremely dry summers, up to several times a decade, which would otherwise be rare in the pre-industrial world. This is particularly true for southern Europe where the impacts are expected to be more severe.

The chart below shows how summers are expected to become drier relative to typical conditions across both southern and northern Europe between now and 2100, with more extreme dry summers in the south. The SPEI is a drought index used to assess precipitation, evaporation and transpiration in the water cycle. 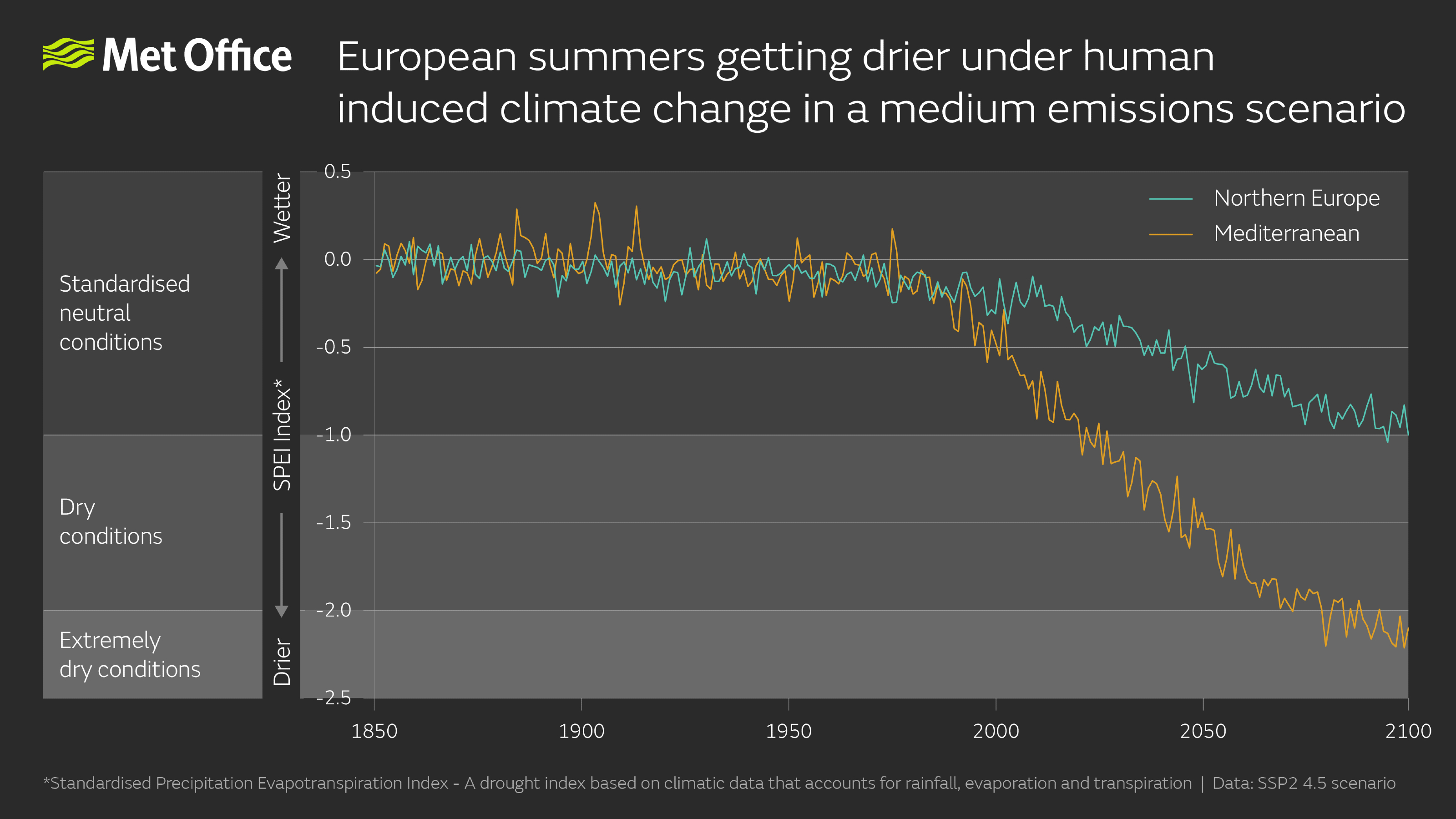 Another aspect of the research found that the frequency of wet extremes is projected to increase as we see drier summers, with higher rates of rainfall but not total seasonal accumulations. This being a result of a warmer atmosphere having greater specific humidity and thus water capacity. Dr Kate Willett from the Met Office explains this further. As more water can be held as a gas in the atmosphere, there is an increased risk of heavier rainfall events, challenging local drainage and storage facilities.

This evidence is consistent with the headline findings from the UKCP18 climate projections, taking the overall effect of anthropogenic climate change into account, drier summers are expected in the UK, with more frequent dry extremes. The findings from this research are important to help the UK plan for future extremes, informing effective adaptation and mitigation strategies to limit impacts of climate change on UK society now and in the future. 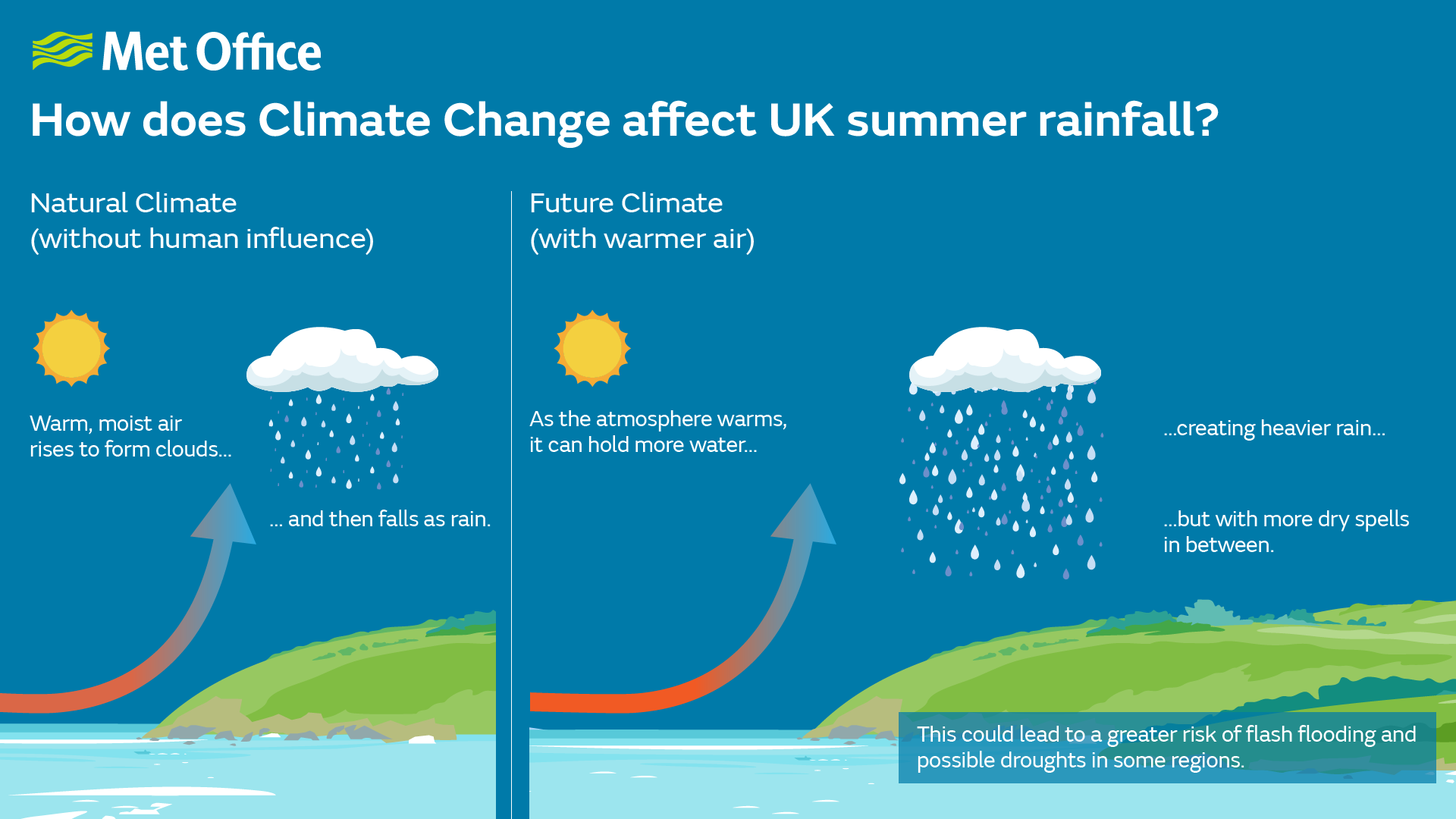 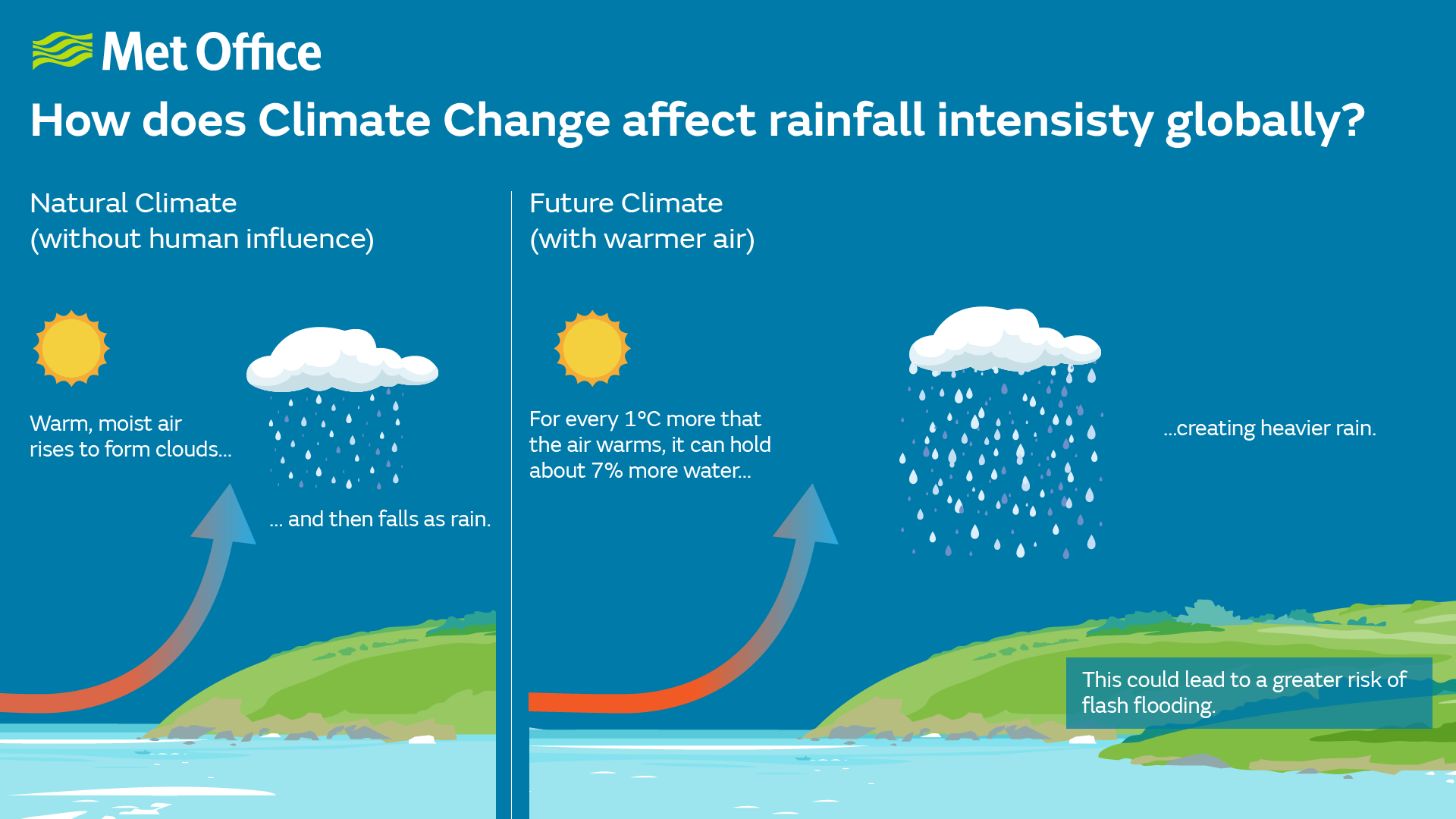