One of the hottest summers in Scotland and N. Ireland

Relative to average, Scotland and Northern Ireland have seen the mildest, driest and sunniest conditions during summer 2021.

Northern Ireland has had its third hottest summer on record, and Scotland its fourth.

The summer of 2021 has been a season of contrasting fortunes across the UK, with the north and west of the UK experiencing a warmer, drier and sunnier season compared to average while parts of the south east have been duller and wetter than average.

Northern Ireland experienced its third warmest summer on record (15.06°C) and also recorded its highest temperature on record with 31.3°C recorded on 21 July at Castlederg in Tyrone. Some regions of Scotland*, including the City of Glasgow, where COP 26 will be held in November, had their hottest summer in records back to 1884.

The UK as a whole has had its ninth hottest summer on record, with an average of 15.28°C. This is the hottest summer for the UK since 2018. While 2019 and 2020 both experienced extreme heatwave events, in contrast 2021 temperatures reached a peak of 32.2°C at Heathrow on 20th July.  However, relatively high temperatures in June and July, coupled with persistently high minimum temperatures and relative warmth across the north of the UK have pushed this year up the rankings. 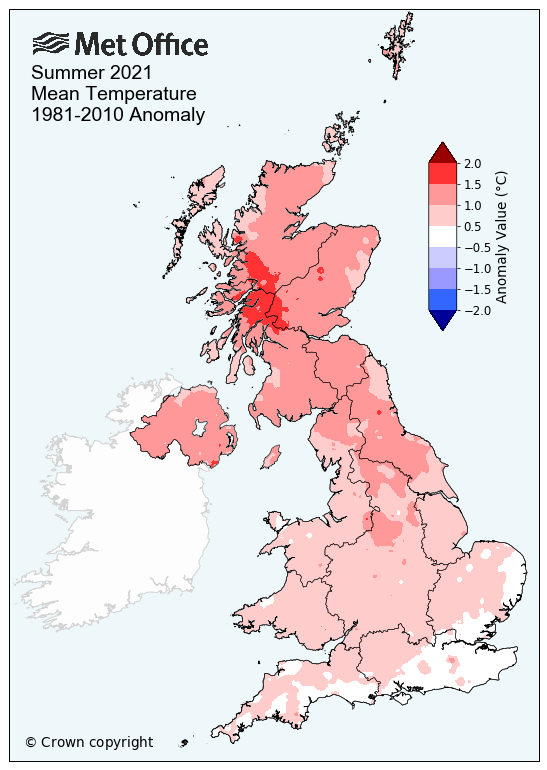 As outlined in our recent blog, the conditions have not been consistent across the UK. London, East Sussex and Hampshire receiving 140% to 150% of average summer rainfall and the Isle of Wight exceeding 200%. However, much of the UK saw below average rainfall and when averaged out across the whole nation, the UK received 75% of its average rainfall (181.2mm).

The south-east corner of the UK also saw less sunshine than the long-term average. The brightest and driest conditions were in the north west of the UK. When averaged out across the whole nation, the UK received 99% of its average summer sunshine (501.6 hours). 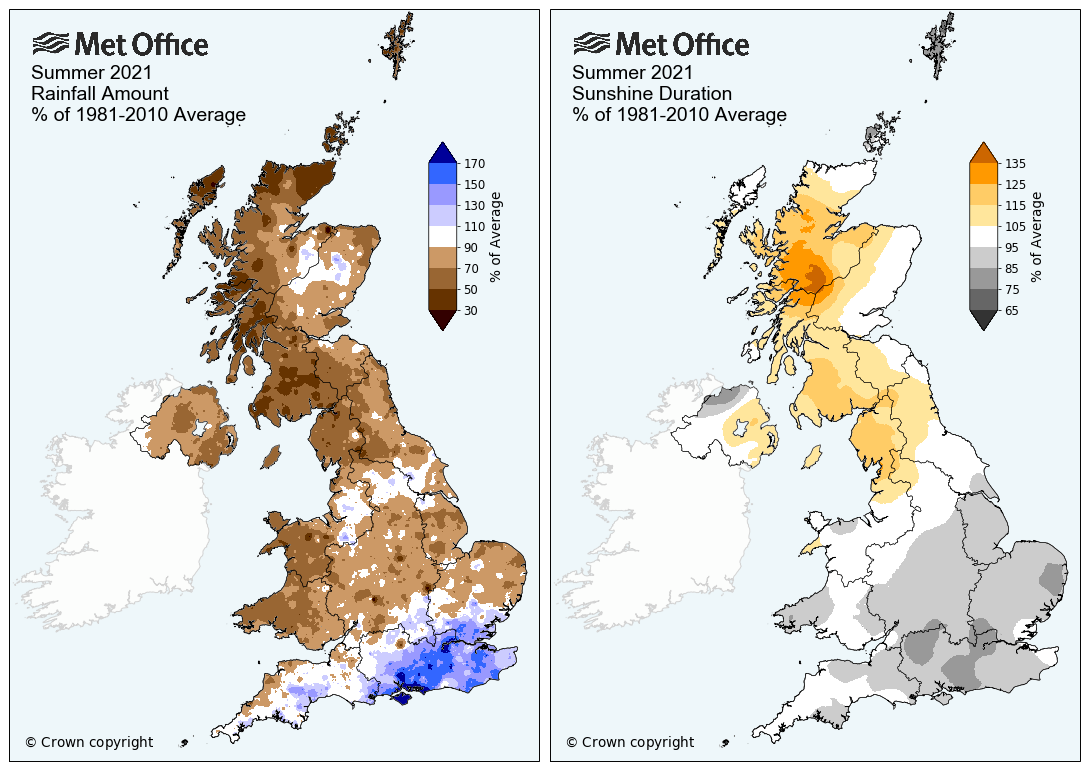 Head of the Met Office’s National Climate Information Centre, Dr Mark McCarthy, said: “Summer 2021 will be remembered very differently depending on where you are in the UK, with record-breaking warm conditions in parts of western Scotland and Northern Ireland, while in the south and east it’s been much duller and wetter. There have been several notable weather events through the summer, including a new temperature record for Northern Ireland and Storm Evert which brought strong winds and heavy rain across England and Wales and extreme rainfall in the south east.” 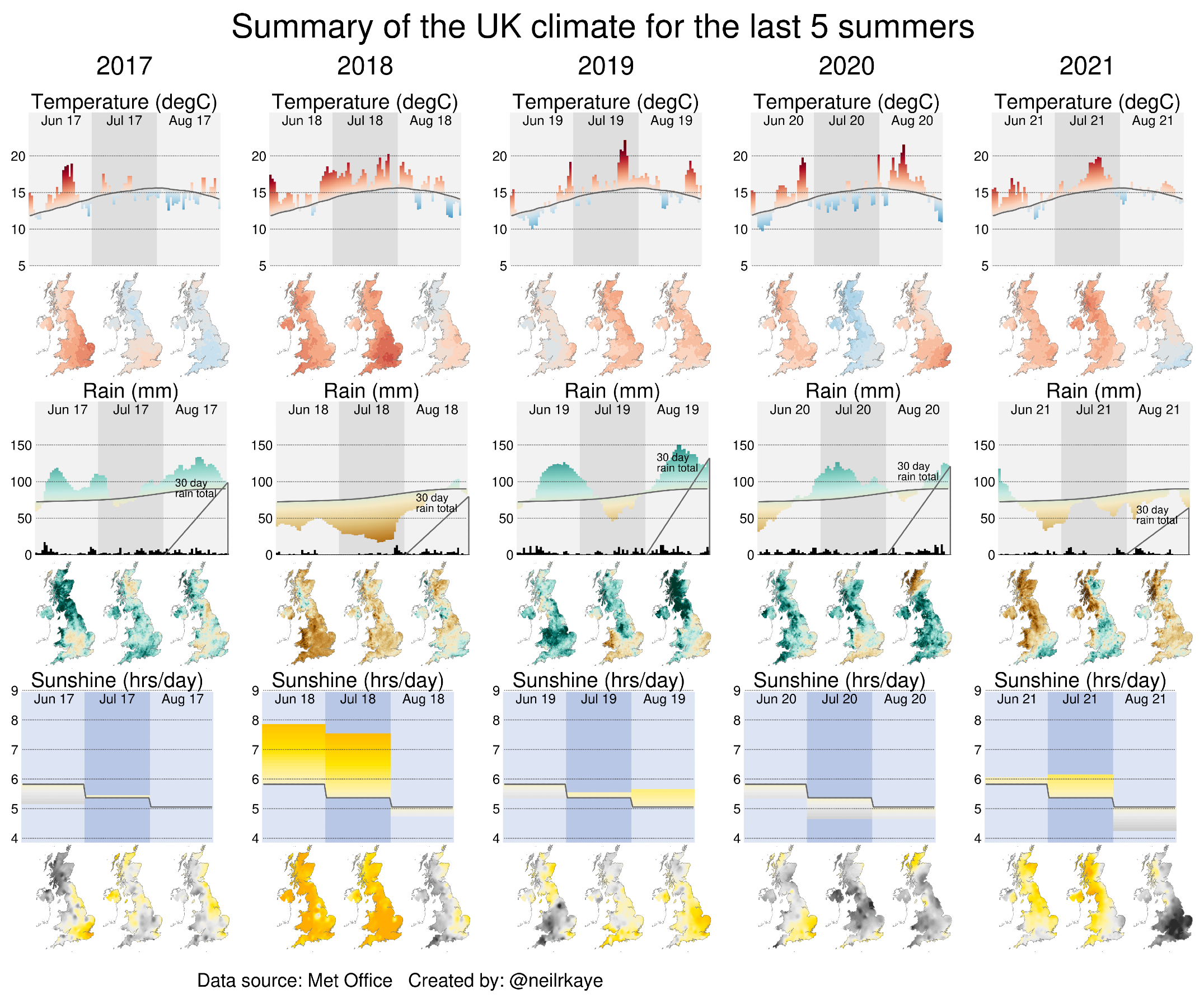 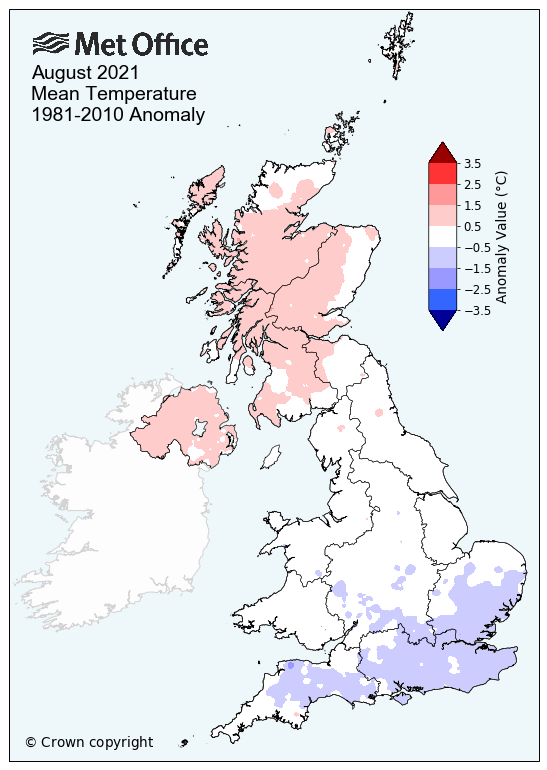 Most of the UK has recorded lower than average rainfall, with the exception of Northern Ireland (110%, 106.8mm) and parts of eastern Scotland, with the UK receiving 73% (65.4mm) of its average. Many regions, particularly along the east of the UK, have experienced a higher than average number of rainfall days (where more than 0.2mm has been recorded), which coupled with plenty of cloud and reduced sunshine may have contributed to a perception of it being wetter. 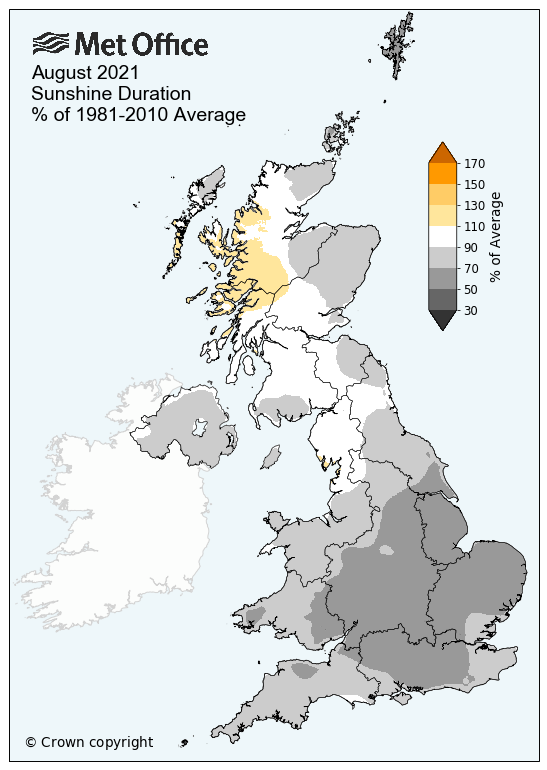