A new study has for the first time shown that human induced greenhouse gas emissions are directly responsible for the long term trends of drying in the Mediterranean and increasing rainfall over the rest of Europe during winter.

The research by Met Office scientists, published in the Journal of Climate, also found that increasing greenhouse gas emissions are associated with increases in extreme rainfall events.

As our atmosphere warms due to human induced climate change, it can hold more moisture. For every 1°C of warming the atmosphere can hold between 6-7% more moisture. This has a significant impact on rainfall patterns across the globe.

Observations show that there has been a pattern of increasing seasonal rainfall north of the Mediterranean basin and decreases in southernmost Europe. This pattern is stronger and more widespread in winter, and weaker in summer when Eastern and Western Europe also experience dry conditions. These patterns are best understood visually, as shown in the maps below, where the red colours show drying and blue colours show increased rainfall between 1901 and 2018. 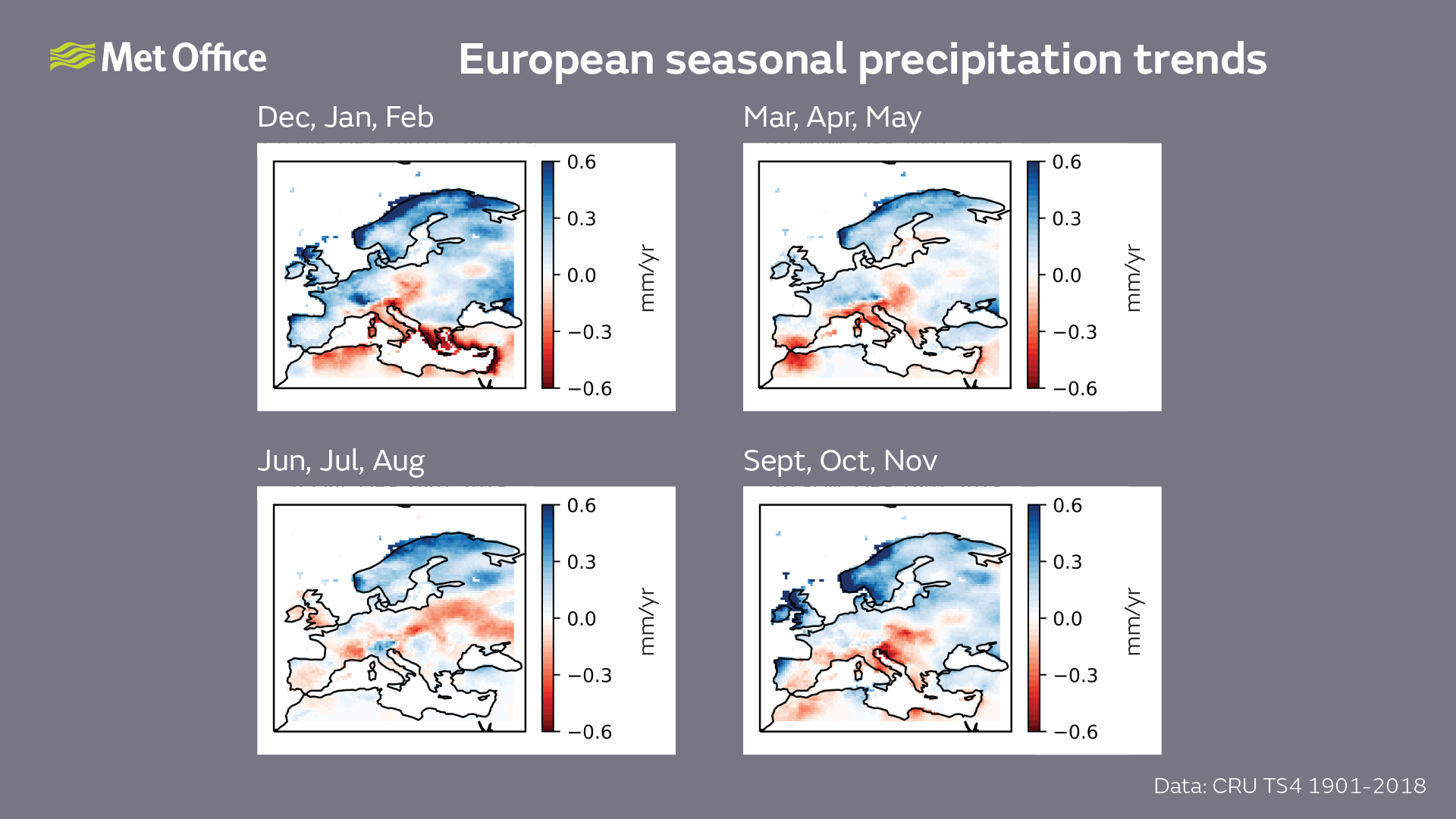 Through this ‘fingerprint’ attribution methodology, it is possible to show for the first time that greenhouse gas emissions are the driving force behind changing trends in rainfall patterns in Europe through the winter months.

Lead author and Met Office climate scientist, Dr Nikos Christidis, said: “For the first time we have been able to isolate the fingerprint of human induced climate change as the lead influence on changing rainfall patterns across Europe in winter. With this clear identification of the role of greenhouse gasses, this study provides further evidence that changes to our rainfall patterns in Europe will continue as our atmosphere warms.”

Formal attribution of human influence on rainfall in seasons outside of winter is not yet possible as the signal is much weaker, making it very hard to identify a single influence on the pattern over time.

On extremes, the research provides further evidence to show that greenhouse gas emissions could increase the variability of European seasonal rainfall, which suggests extreme events will be more likely in the future. There is an increasing risk of extremely dry seasons in the Mediterranean and extremely wet seasons elsewhere in Europe, which can lead to major impacts such as droughts and floods. The maps below show this visually, green colours indicate an increase in the likelihood of extremely high seasonal rainfall events and brown colours a decrease. 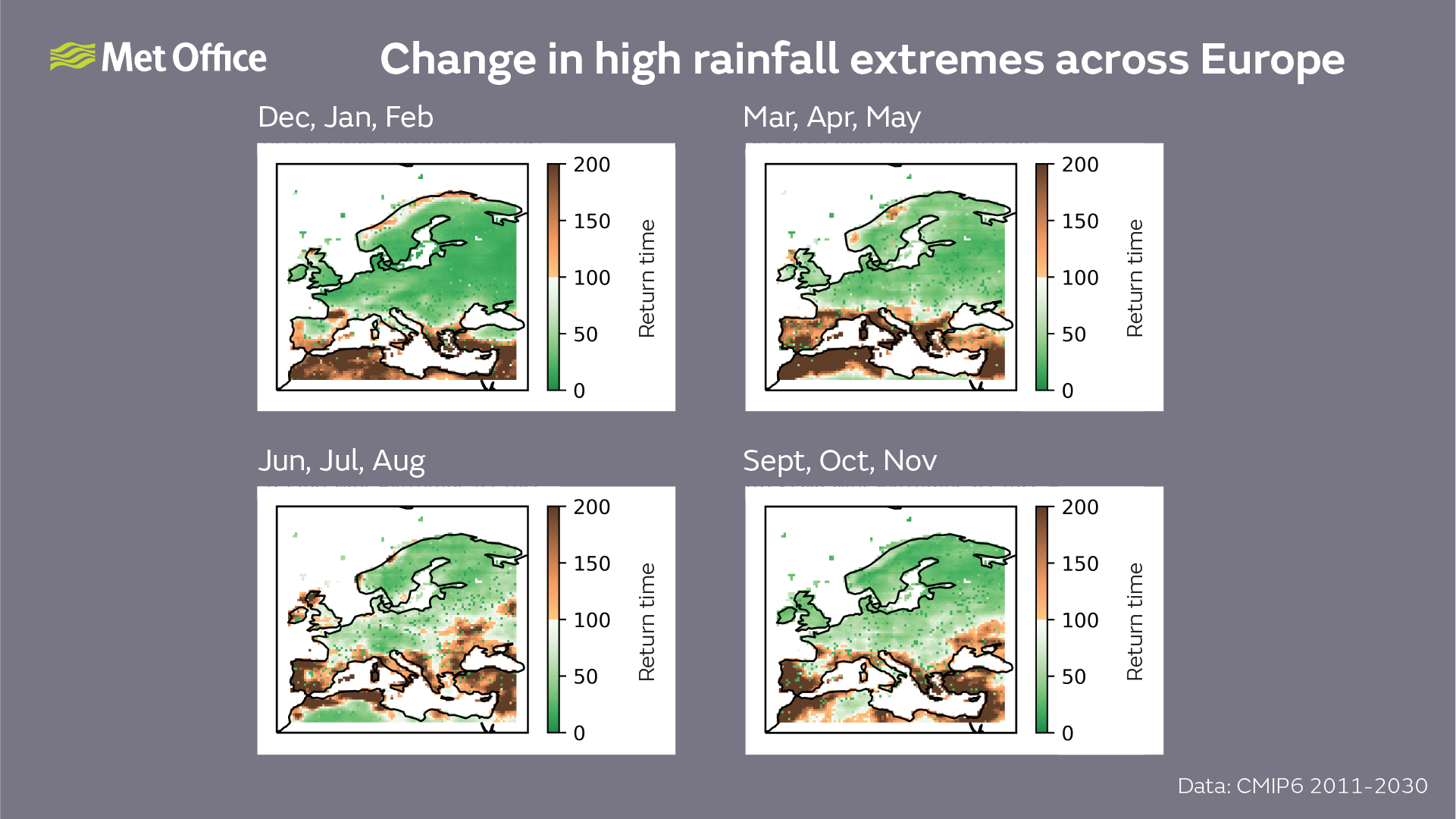 The team also found that some of this trend towards increasing extreme rainfall events has been masked by other atmospheric pollution such as aerosol emissions, and the reduction of this pollution will result in an acceleration of these changes in rainfall.

While greenhouse gas emissions increase the longwave radiation at the surface, aerosol emissions reduce the shortwave radiation through scattering and the modification of cloud properties. The relationship between these two effects determines the level of warming in our atmosphere. It is expected that as European aerosols emissions decrease, the greenhouse gas influence on rainfall patterns will intensify in coming years.

Contributing author, Professor Peter Stott, said: “Our research provides further evidence that climate change is already impacting the weather we experience on earth and in ways people might not expect. While some parts of Europe are getting wetter increasing the risk of floods, others are getting dryer increasing the risk of droughts, and the odds of extremely dry seasons and extremely wet seasons are shortening all the time due to the increasing variability of seasonal weather. This kind of research is vital to provide a scientific foundation for citizens, organisations and decision makers to prepare for future changes in our climate.”