Mild autumn keeps 2022 on track to be warmest UK year

The UK would need a December of near-record cold weather to avoid 2022 being the warmest year on record for the UK, according to Met Office statistics.

The news comes as provisional figures from the Met Office show Autumn 2022 (September, October, November) was the third warmest on record for the UK, with an average mean temperature of 11.1C, topped only by 2011 and 2006’s Autumn figures, in a series which goes back to 1884.

In addition, November continues 2022’s run of every month being warmer than average, with the first 11 months of the year the warmest on record for the UK. 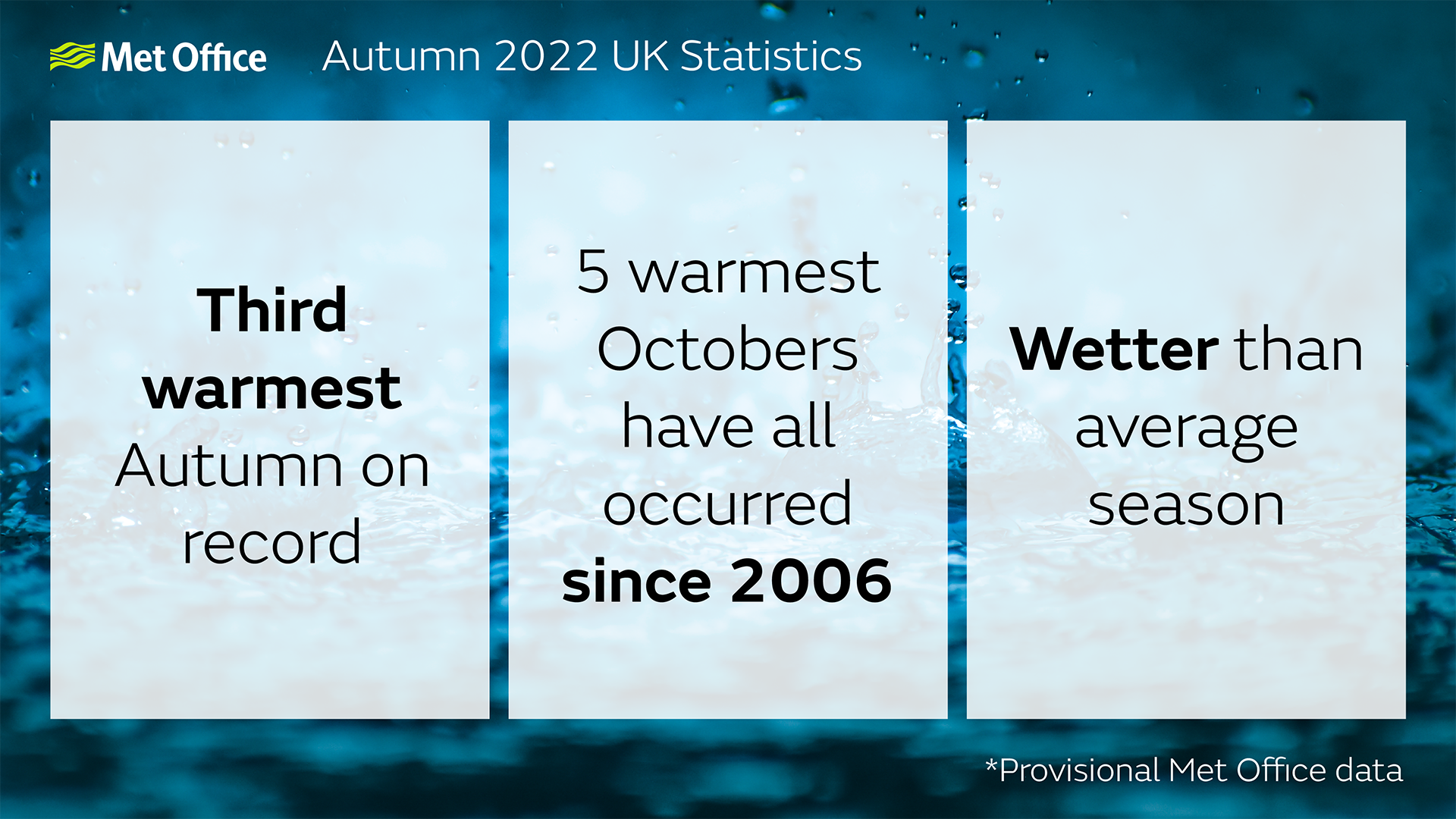 Mike Kendon of the National Climate Information Centre said: “Although it’s too early to guarantee that 2022 will be the UK’s warmest year, the first 11 months have set up the distinct possibility of a record-breaking warm year, with only a very cold December able to potentially influence where the year will eventually sit in the record books.”

“All of the top ten warmest years on record for the UK have occurred since 2002; a clear indicator of our warming climate. Human-induced climate change has increased the likelihood of extreme heat as we saw in July this year, but this year has also seen persistent warmth resulting in the year overall challenging the record previously set in 2014.”

Autumn’s mean temperature provisionally enters as the third warmest Autumn on record for the UK. That warmth compared to average was seen across the UK with England, Wales, Scotland and Northern Ireland all seeing mean temperatures in their top 5 on record.

Spurred on by a mild September, then the seventh warmest October on record, November has continued the mild theme for the season, with a southwesterly airflow helping to keep temperatures above average for much of the month.

Rainfall for the season was also well above average for many. The UK had 402.5mm of rain, which is 19% more than average. Northern Ireland deviated the most significantly from average, with over a third more rain than would normally be expected, with 433.4mm during the season.

Even the south of England, much of which had been in drought status at the close of the summer, saw 301.9mm of rain, which is 28% more than average. However, the year so far continues to be drier than average, especially in southern areas.

EA Executive Director for Environment and Business, John Leyland said: “The exceptionally wet weather over autumn in some areas has been beneficial in wetting up soils and improving river flows. Dry soils have now been replenished but there is a delay in the recharge of groundwater and reservoirs in some parts of the country.

“Reservoirs are on average around 73% capacity but some are still well below the levels we would expect at this time of year.

“We cannot rely on the weather alone - if we are to avoid a worse drought next year, it will require action by us all. All sectors have to play a role in supporting the actions needed to avoid the impacts of drought on water supply and the environment next year, and everyone should use water wisely to continue to reduce water consumption.”

November follows theme of the season

November came close to setting records of its own. According to provisional Met Office figures, November 2022 was the third warmest on record for the UK, with an average mean temperature of 8.2C.

Mike Kendon said: “November had some exceptionally mild weather due to a south-westerly flow of Tropical Maritime air. On 11th to 13th we reached the mid to high teens quite widely – whereas we would normally expect maximum temperatures of around 10 C at this time of year. The UK’s highest monthly temperature of 21.2C in North Wales was only just over 1C less than the UK November record.

“We have also experienced a run of very mild nights, with both Scotland and Northern Ireland each recording new November daily minimum temperature records of 14.6 C and 14.5C respectively.

“While the dominant conditions led to often mild conditions, it also led to a lot of wet weather, especially across parts of the far south-east of England and eastern Scotland. In just 5 days, parts of Aberdeenshire recorded 150% of the normal monthly rainfall, causing some flooding problems in the worst affected areas.”