Warm May continues the theme of Spring

A warm May – spurred on by high overnight temperatures – concluded a Spring that goes down as the fifth warmest on record for the UK, according to provisional statistics from the Met Office.

Mean temperatures for the UK stood at 11.8°C, some 1.2°C above the long-term average, but these figures were largely spurred on by average minimum temperatures of 7.8°C, which is 1.5°C above average. 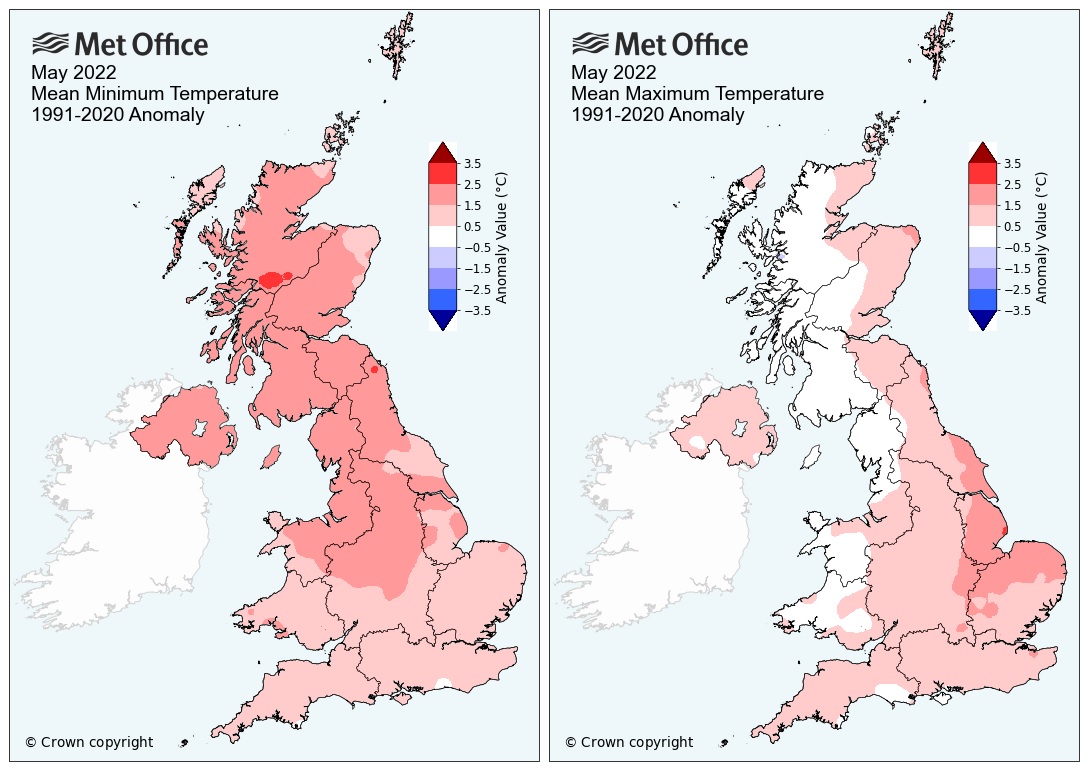 Interestingly, despite the high mean temperatures, the number of sunshine hours has been below average for the month, with northern and western areas being particularly dull. Sunshine hours were down by around a fifth from the long-term average, with 152.8 hours in the UK. 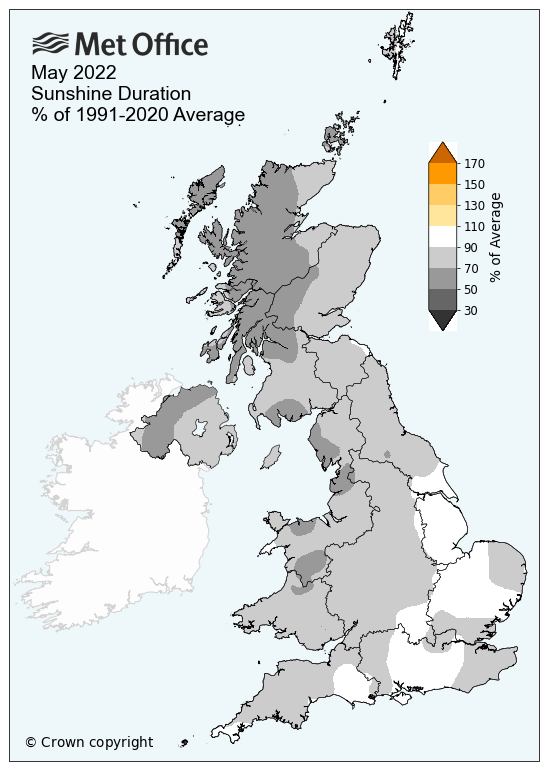 Going even more granular, the north of Scotland saw 54% more rainfall than average with 148mm of rain in the month. 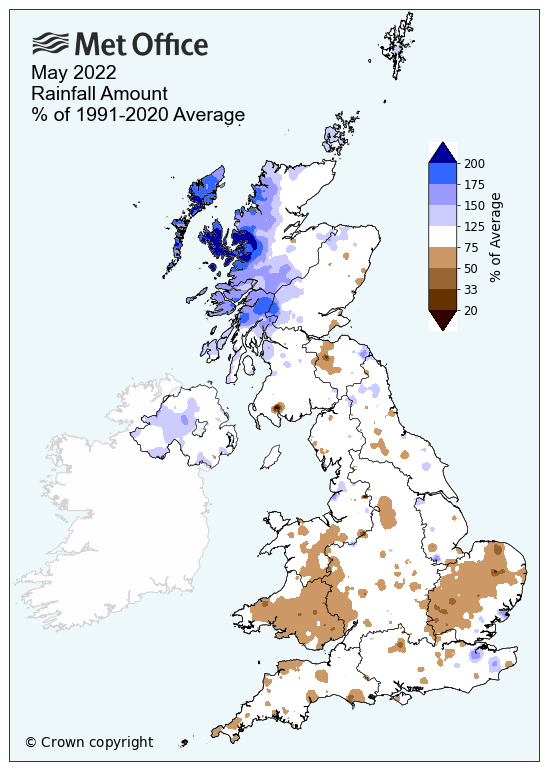 Dr Mark McCarthy of the National Climate Information Centre said: “High minimum temperatures are the most notable statistic coming from May’s provisional figures, helping to bring mean temperatures for the month into the top five on record for May.

“Cloud cover has been one part of the picture for the higher-than-average minimum temperatures, with overcast skies helping to lock some heat in through the night, especially in northern and western areas. Warmer air from the continent has helped keep minimum temperatures up in the south and despite that lack of daytime sunshine, maximum temperatures have remained above-average for most, although without any prolonged spells of very high daytime temperatures.”

The warm theme continues when looking at Spring as a whole (March, April and May). The UK had its fifth warmest spring on record according to mean temperature, with England (5th), Scotland (6th), Northern Ireland (7th) and Wales (7th) all seeing average temperatures in their top 10 warmest since the series began in 1884. 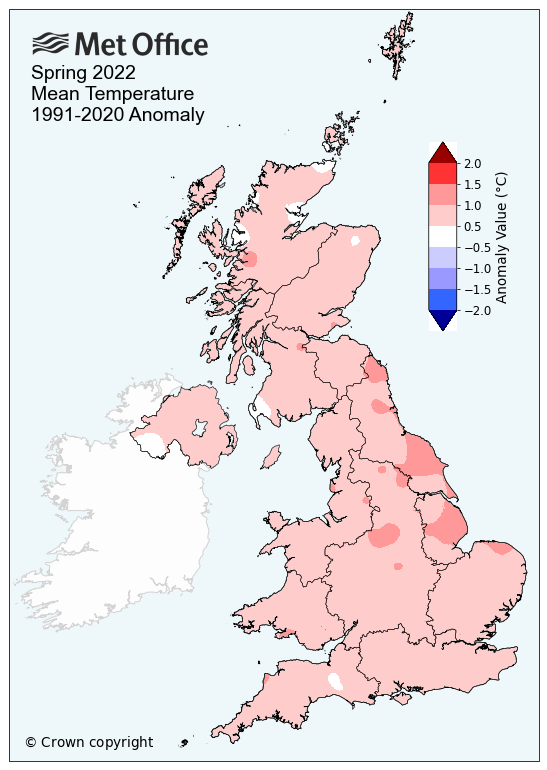 Rainfall was in short supply in March and April, with 58% and 68% of average rainfall for the UK respectively during these months. Despite May seeing rainfall closer to average for the UK, rainfall for the season is still down by around a quarter, with 174.1mm of rain (76% of average). Only northern areas of Scotland and some of Northern Ireland got nearer to their average rainfall totals for the season, with a fairly dry season for almost anywhere else in the UK, although not dry enough to trouble any records. 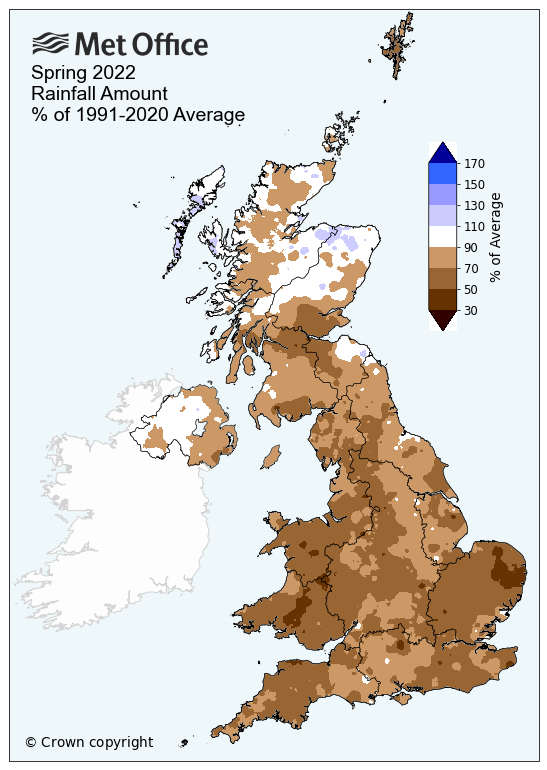 Hours of sunshine were the most varied of the statistics through the three-month period. The UK had its sunniest March since 1929 and its second sunniest overall (records date back to 1919), while April also saw above average sunshine levels. However, May saw a slump in the figures with fairly frequent cloud cover, especially in the north. 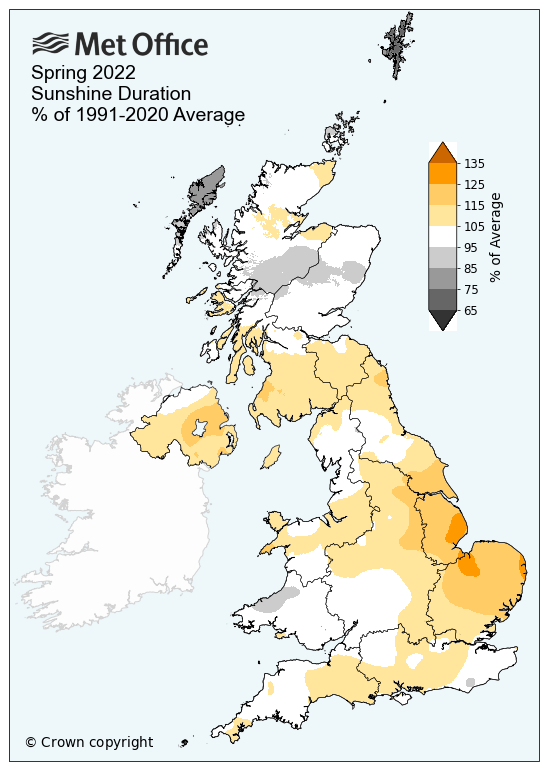 Mark McCarthy of the National Climate Information Centre said: “Spring 2022 has been rather warmer, drier and sunnier than the average Spring overall, with only a few interludes of more unsettled spells of weather.

“Eastern coasts have been the sunniest relative to average, while the season has been fairly dry, despite  closer to average rainfall in May.”