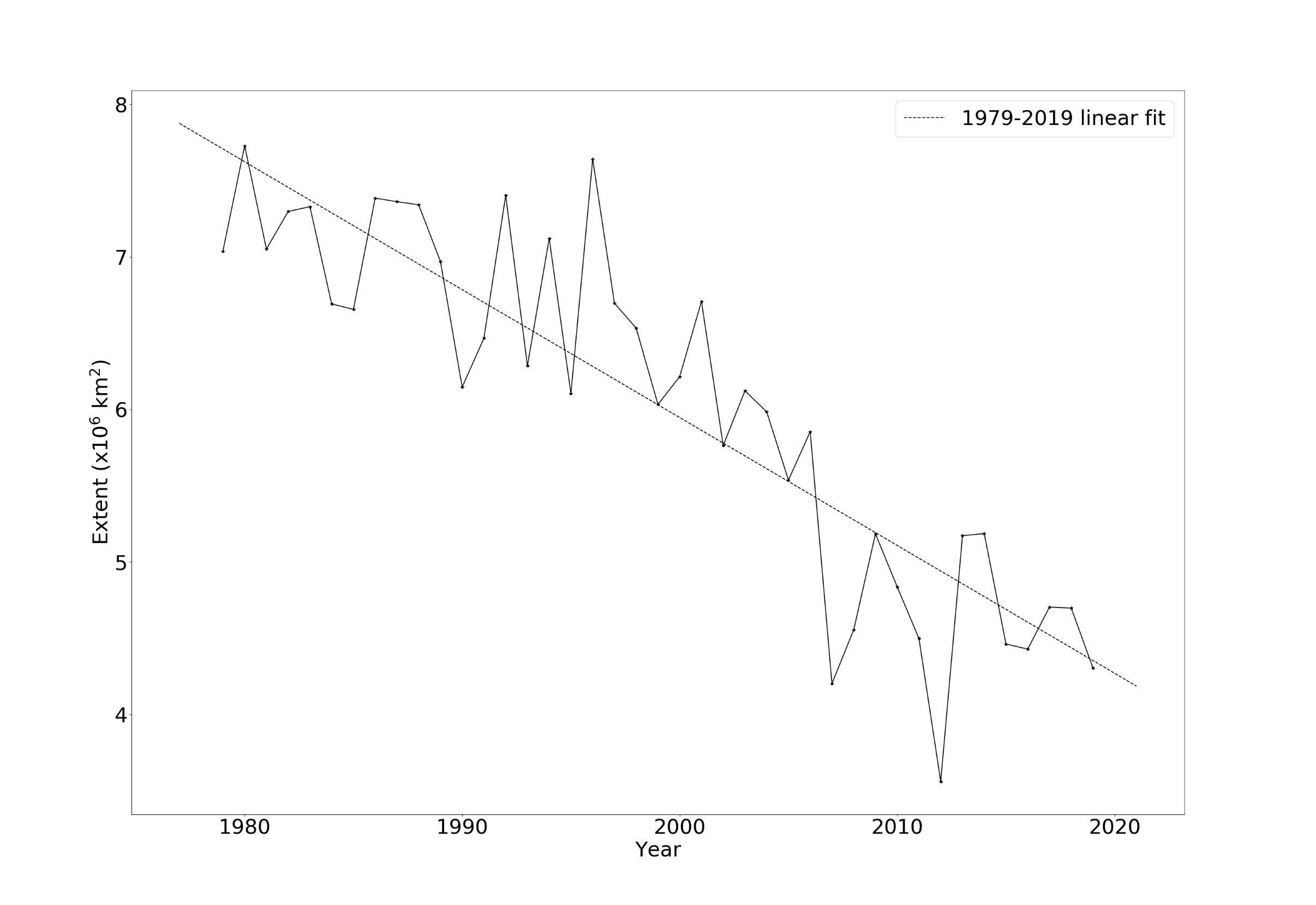 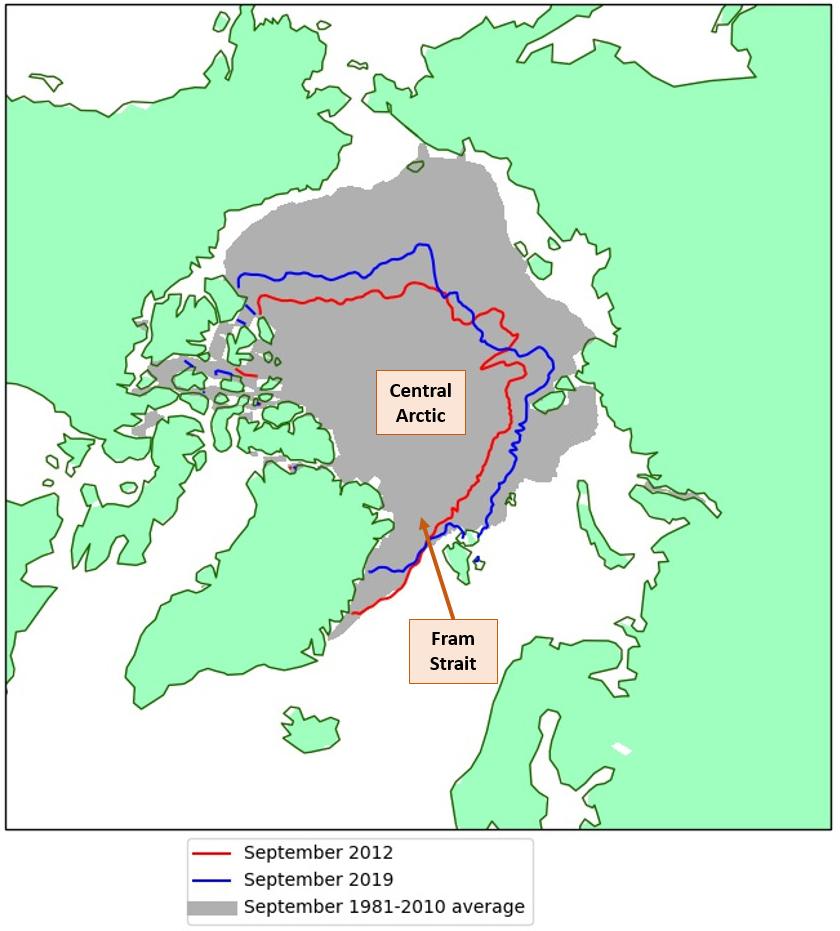 Summer 2019 was exceptionally warm in the Arctic (Figure 3). As measured by temperatures at 925mb (about 750m above sea level), the May-August period was the warmest on record over the Arctic Ocean, at 2.3°C above the 1981-2010 average according to the NCEP reanalysis (Figure 4). Some regions of the Central Arctic saw temperatures that were, on average, more than 4°C higher than normal. 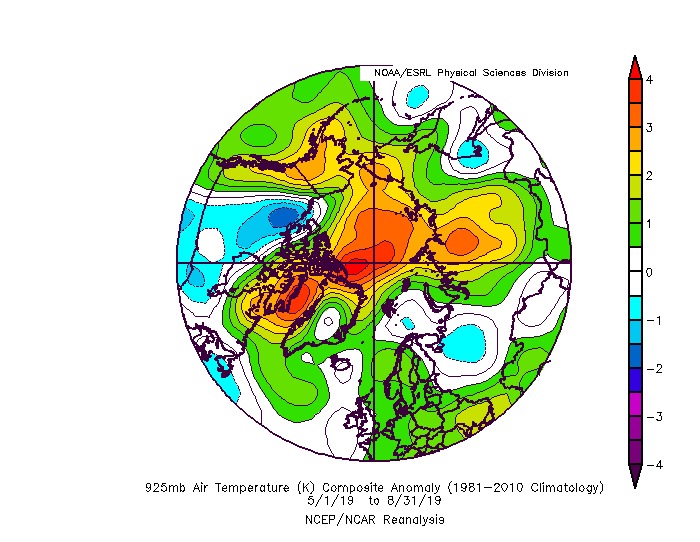 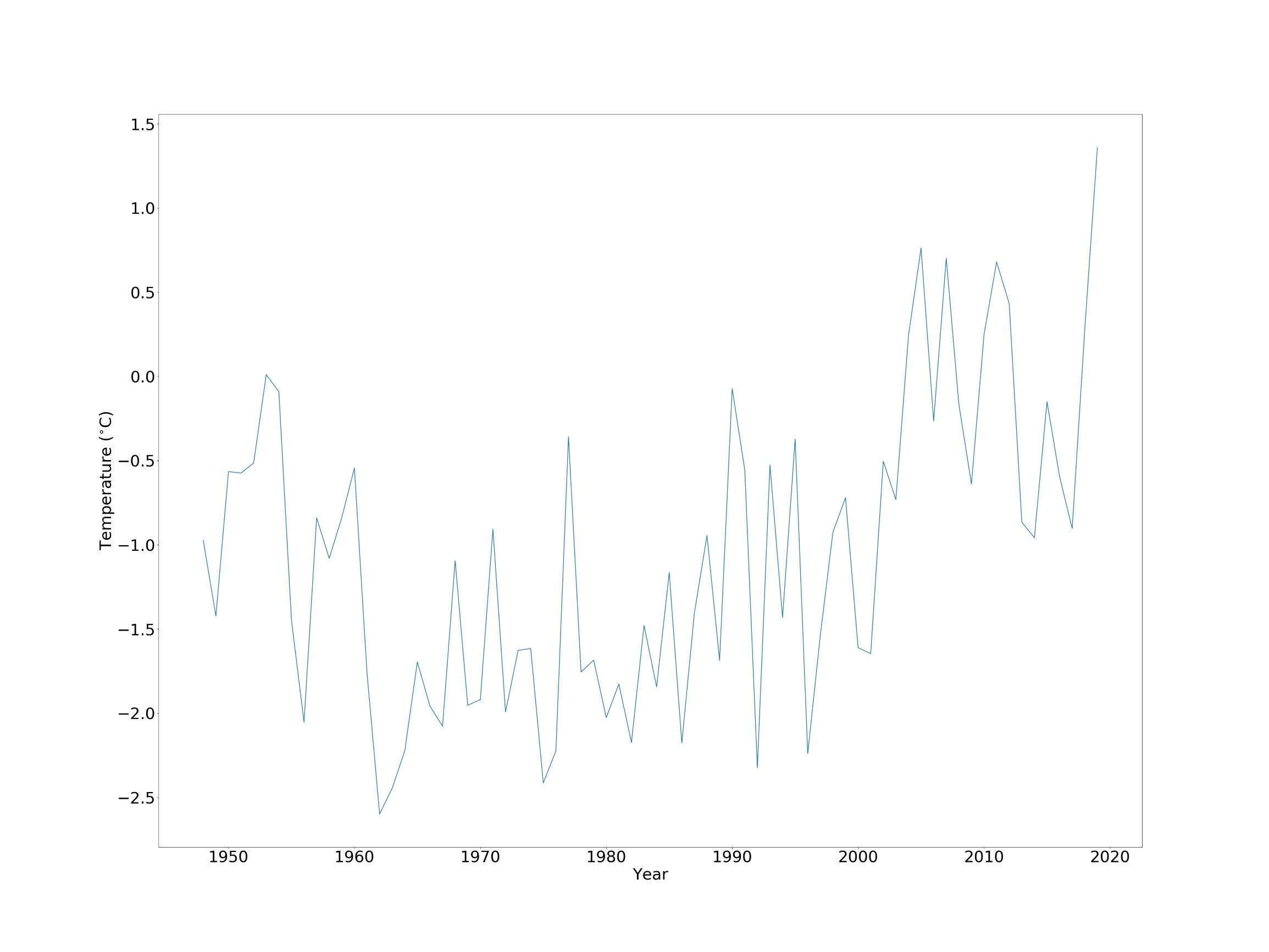 Figure 4. Average May-August temperature at 925mb over the Arctic Ocean region, for the years 1948-2019. Data are from the NCEP reanalysis.

The average sea level pressure anomaly of the summer saw a weak pattern of high pressure over Greenland and the North American sector of the Arctic. This pattern is similar to the Arctic Dipole Anomaly, which has historically been associated with elevated levels of Arctic sea ice loss (e.g. Wang et al, 2009). 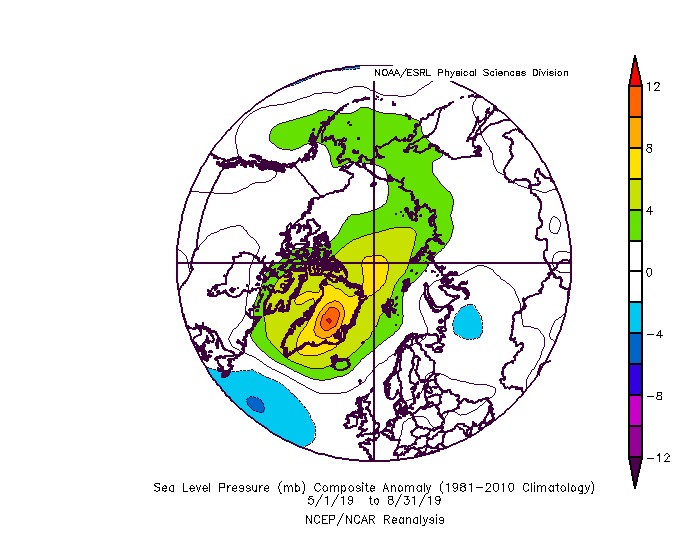 Figure 5. Mean sea level pressure anomaly for May-August 2019 relative to the 1981-2010 average. Data are from the NCEP reanalysis.

The relatively weak pattern seen in the May-August average conceals much variation during the summer. May and July, the months which saw fastest sea ice loss relative to average, saw a very strong manifestation of the Arctic Dipole Anomaly with exceptionally high temperature anomalies over much of the Central Arctic, in some places exceeding 7°C. In June and August, during which average sea ice loss was nearer average, a rather different pattern was common, with higher pressure over the East Siberian and Laptev Seas, but more cyclonic conditions in the central Arctic Ocean – particularly during mid-June and much of August. This drove the transport of warm air over the seas north of Western Siberia but allowed nearer average temperatures elsewhere in the Arctic Ocean.

During the summer, the Sea Ice Prediction Network (SIPN) collates predictions of September Arctic sea ice extent from scientific centres around the world and publishes these predictions in a series of Sea Ice Outlooks (SIO), in June, July and August. In 2019, as in 2018, the observed September extent fell inside the central ranges of the distribution of predictions for all three outlooks, with the median prediction within 0.2 million square km of the eventual extent (Figure 6). This is consistent with a finding by Stroeve et al. (2014) that the SIO predictions tend to be more skilful in years for which sea ice extent was close to the linear trend. 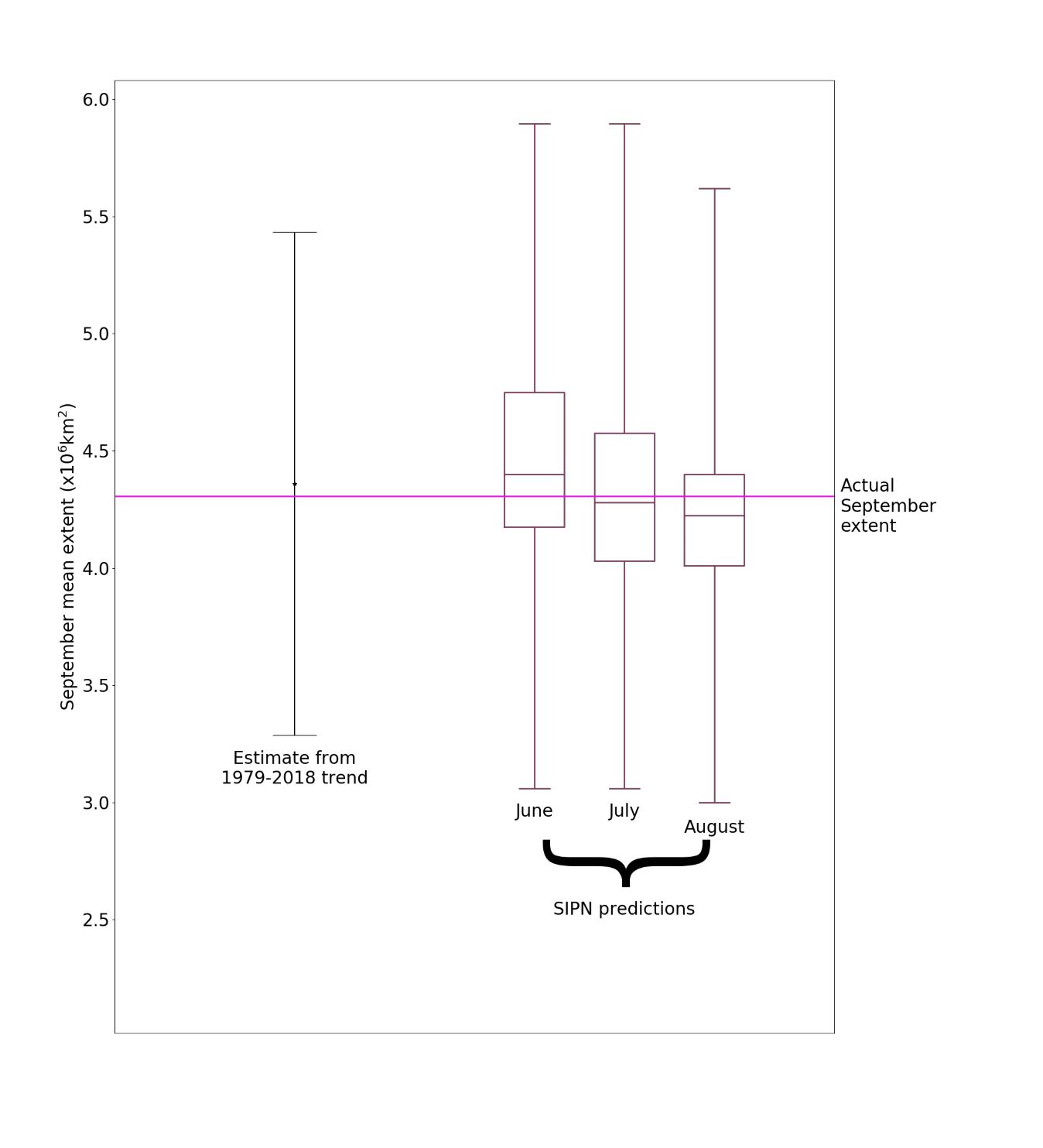 Figure 6. Arctic sea ice extent for September 2019 according to HadISST1.2 (pink line), compared to an extrapolation from the long-term linear trend and predictions submitted to the three SIO reports (maximum, minimum, median and quartiles from each distribution shown). 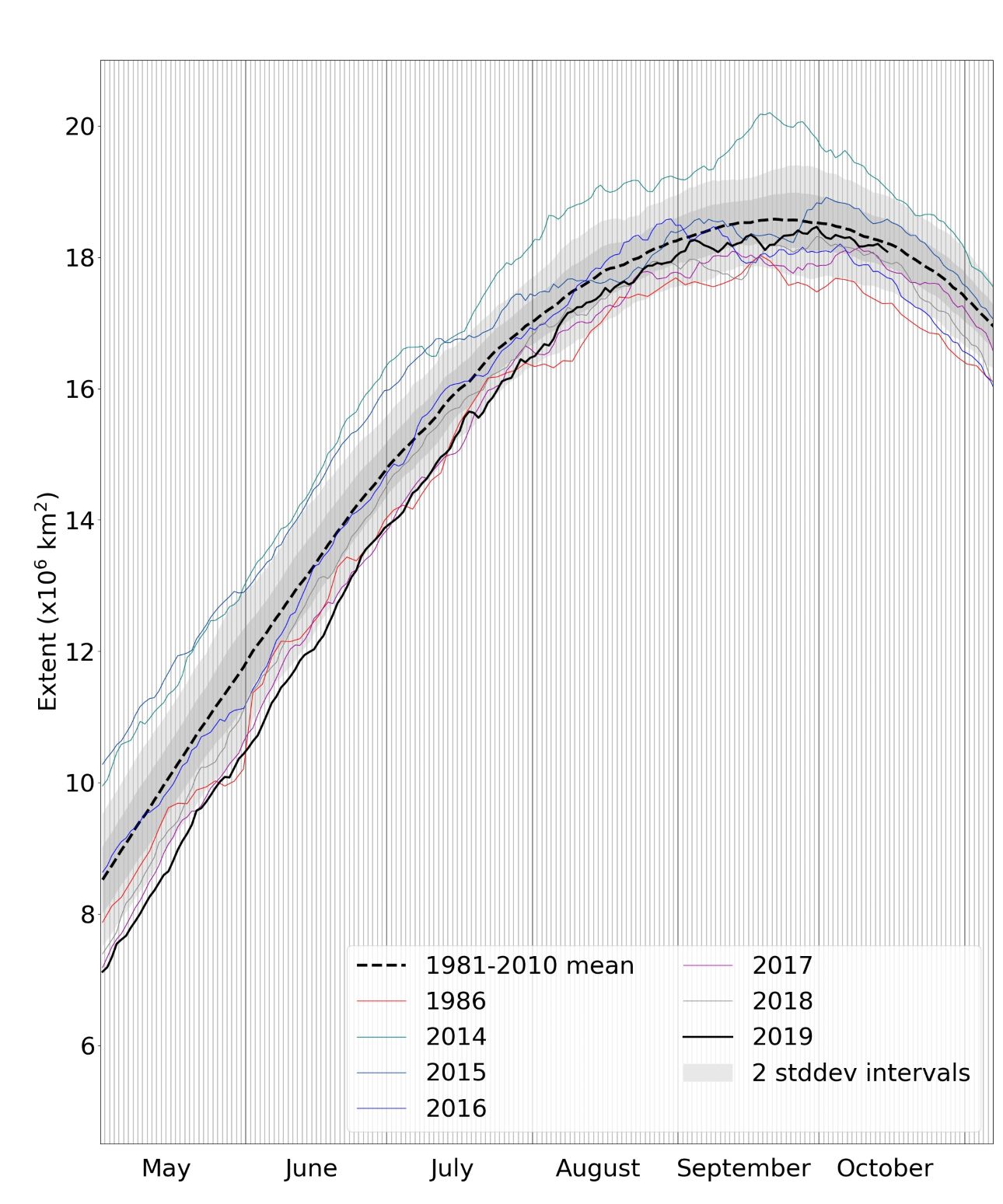 Figure 7. Antarctic sea ice extent for 2019 and other recent years, plus the record low year of 1986, compared to the 1981-2010 average, with 1 and 2 standard deviation intervals indicated. Data are from NSIDC.

Antarctic sea ice extent has mostly been at low levels since autumn 2016, although the anomaly varies between regions. In September 2019, areas of lower than average extent in the eastern Weddell Sea and Bellingshausen Sea were partly counterbalanced by areas of higher than average extent on the other side of the Antarctic, in the Indian Ocean and Western Pacific sectors (Figure 8). 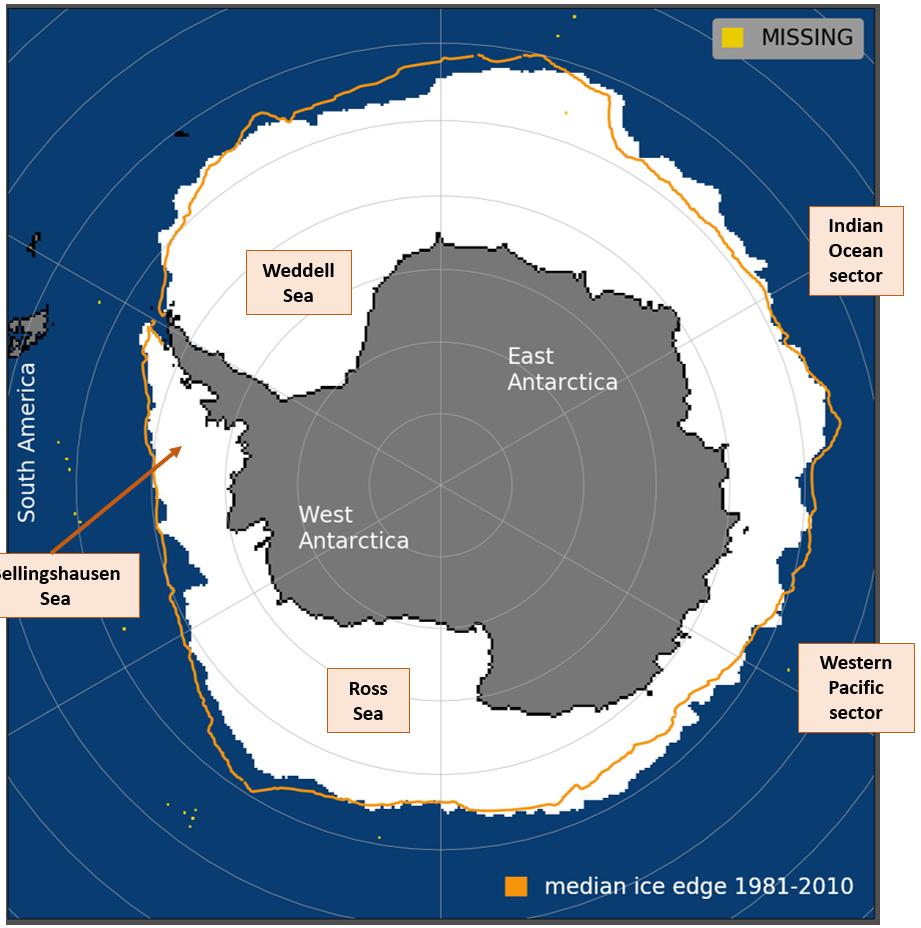