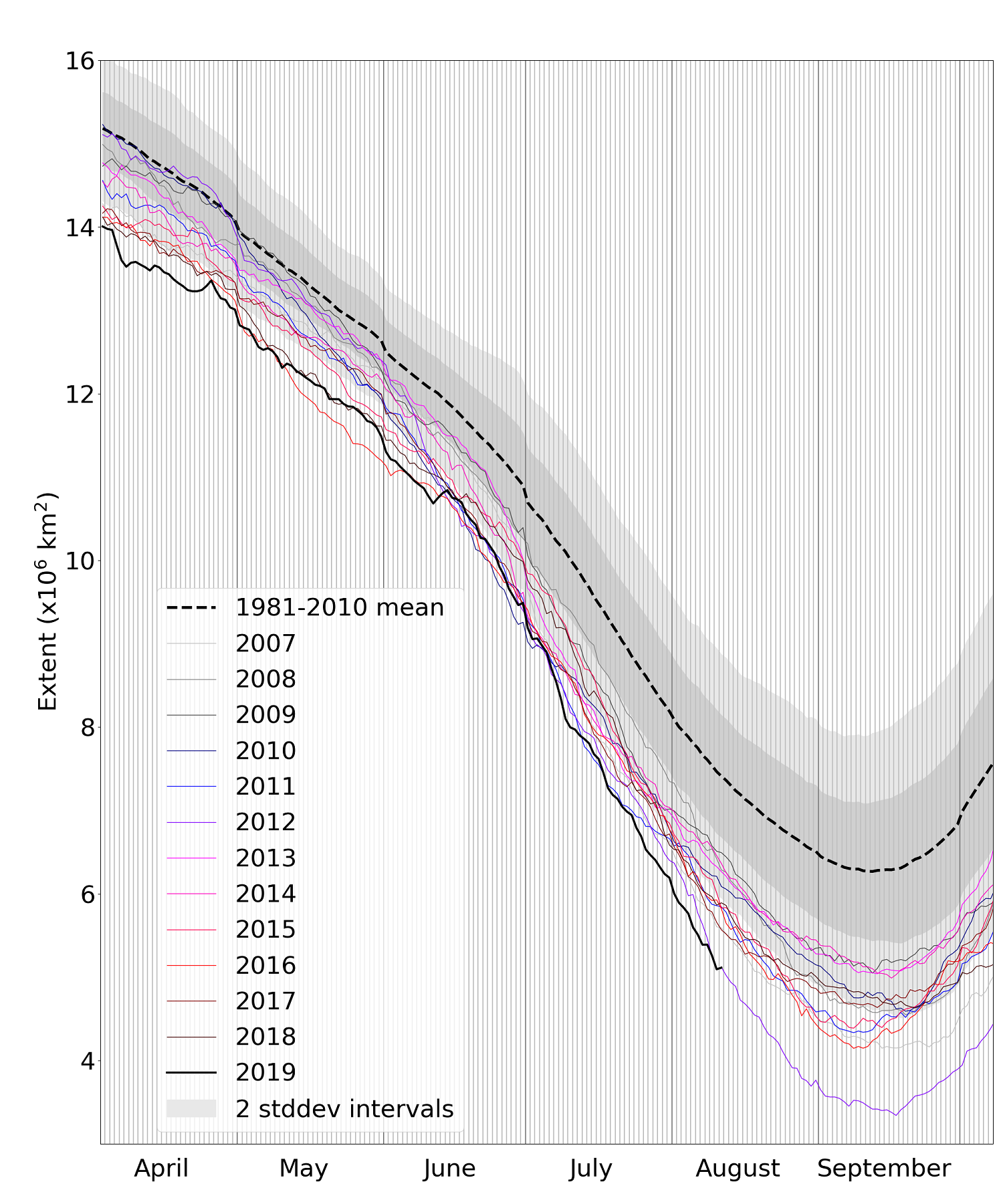 Figure 1. Daily Arctic sea ice extent since April 2019, compared with recent years and the 1981-2010 average with ± 1 and 2 standard deviation intervals indicated by the shaded areas. Data are from the National Snow and Ice Data Center (NSIDC).

Sea ice extent is exceptionally low in the Arctic, particularly in the Beaufort and Chukchi Seas north of Alaska, and the Laptev and Kara Seas (Figure 2). Low concentrations in the East Siberian Sea mean this region is vulnerable to melt further, and any detached areas of ice are likely to melt completely by September. However, the extent is close to the long-term average in the Atlantic Sector. 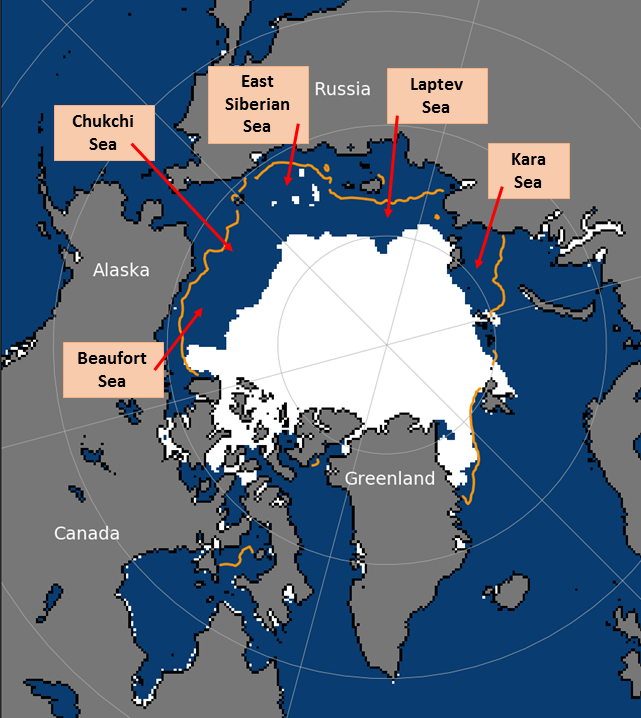 Figure 2. Arctic sea ice extent on 11th August 2019, with 1981-2010 average extent indicated in orange, and the regions referred to in the text labelled. Underlying map and data courtesy of NSIDC. 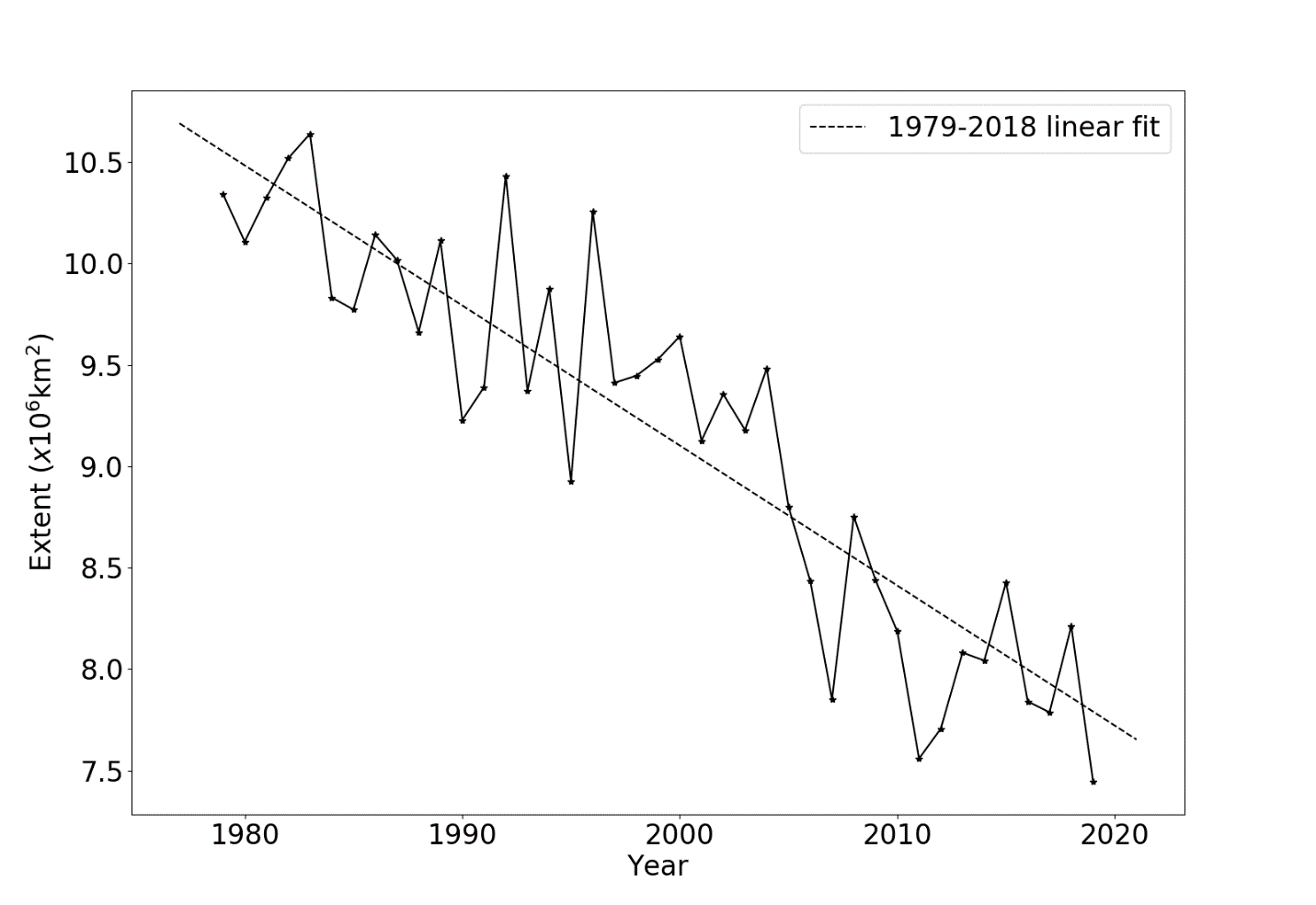 The beginning of July was dominated by anticyclonic conditions over the Arctic (Figure 4a) and settled weather. This was associated with warm air temperature anomalies (Figure 4c), particularly in the East Siberian Sea (see Figure 2) where the wind direction was predominantly southerly, leading to rapid ice melt (Figure 1). The middle part of the month was dominated by cyclonic (low pressure) conditions (Figure 4b) over the Beaufort, Chukchi and East Siberian Seas. This may have led to the significant ice loss seen here, due to strong winds breaking up and/or transporting sea ice away from the area. In the latter part of July a return to anticyclonic conditions was seen, leading to continued ice melt and the subsequent record low ice extents for this time of year. 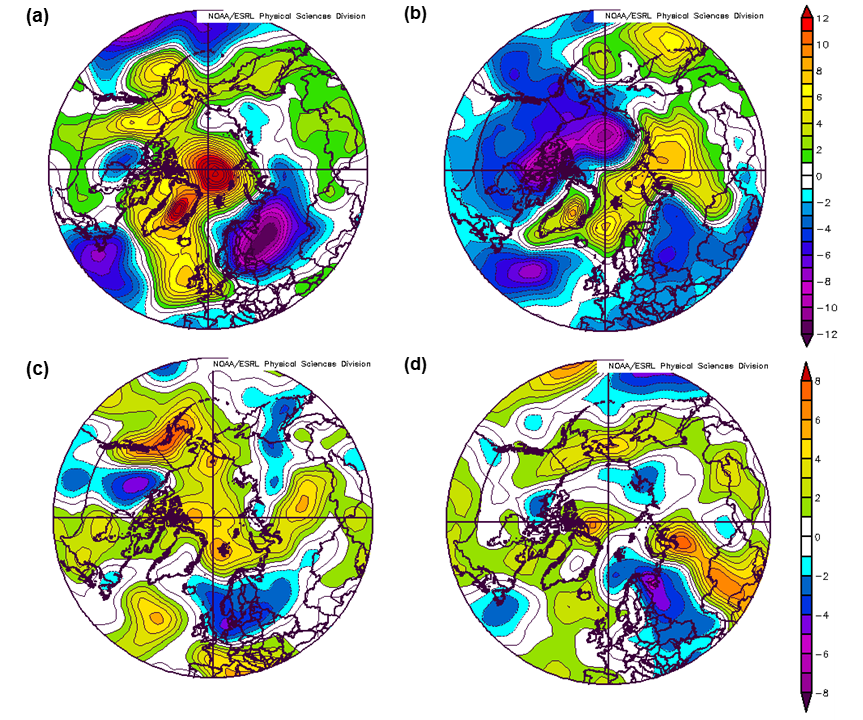 A number of predictions of this year’s seasonal Arctic minimum (September) ice extent is displayed in Figure 5 and described below:

Although the July SIO predictions suggest that a new record low September ice extent this year is unlikely, there remains a high degree of uncertainty for September forecasts made from July. Meanwhile, the statistical predictions, for which the lowest end of the uncertainty ranges are below the 2012 value of 3.6 million square km, suggest that a record September low ice extent is a possibility. While the September minimum extent will be heavily dependent on the Arctic weather conditions over the rest of the month, the chance of a record low is higher this year than it has been in the previous few years. 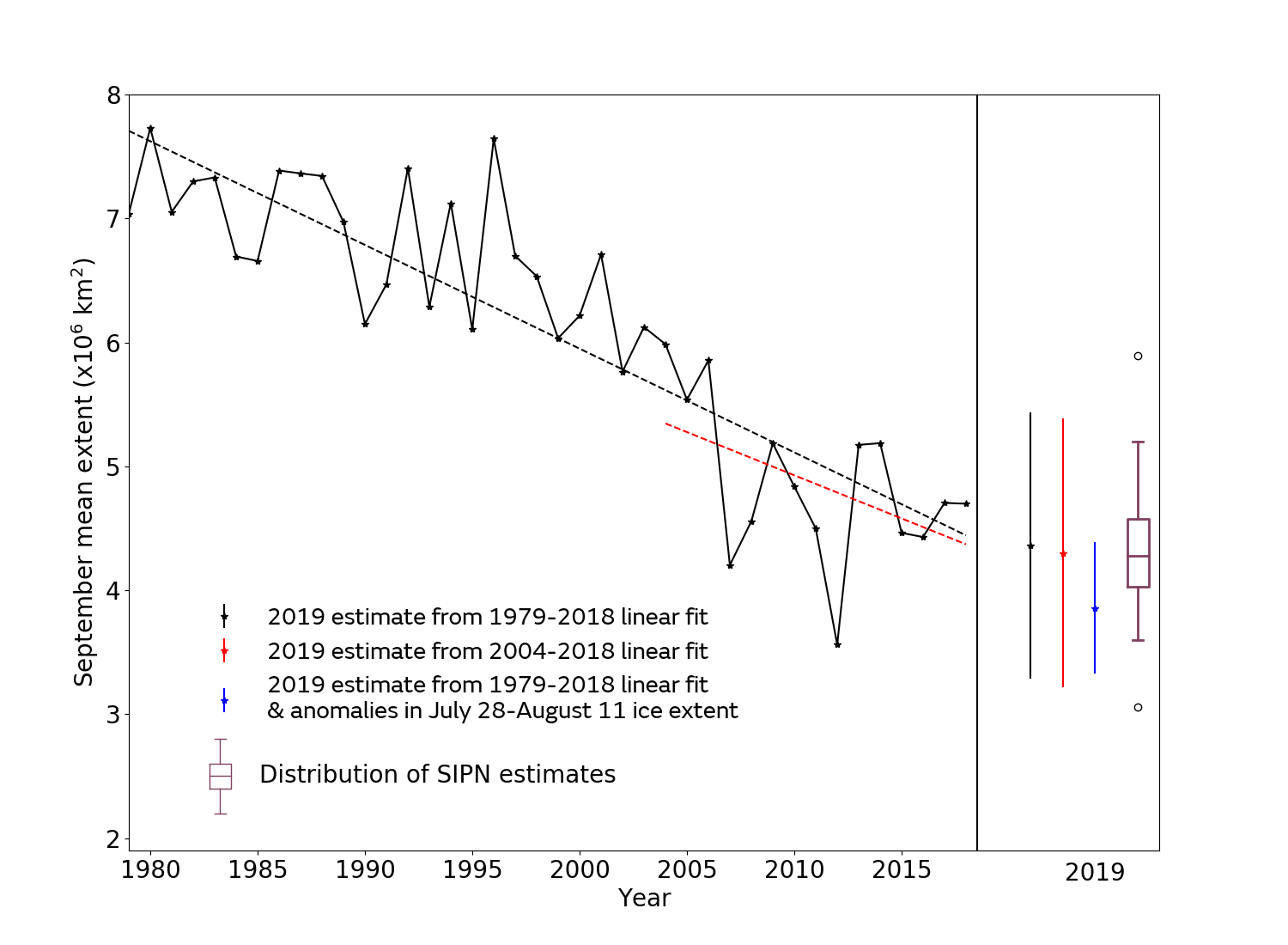 Figure 5: September median Arctic sea ice extent since satellite records began in 1979 from the HadISST1.2 dataset (Rayner et al., 2003), with predictions from the SIPN Sea Ice Outlook and statistical predictions for September 2019. For the statistical predictions, error bars represent twice the standard deviation of September mean ice extent about the trend lines with respect to which the estimates are taken. The Sea Ice Outlook is shown as a boxplot indicating the range, median and quartiles of the 39 predictions submitted. Values more than 1.5 interquartile ranges from the first and third quartiles are shown as outliers. 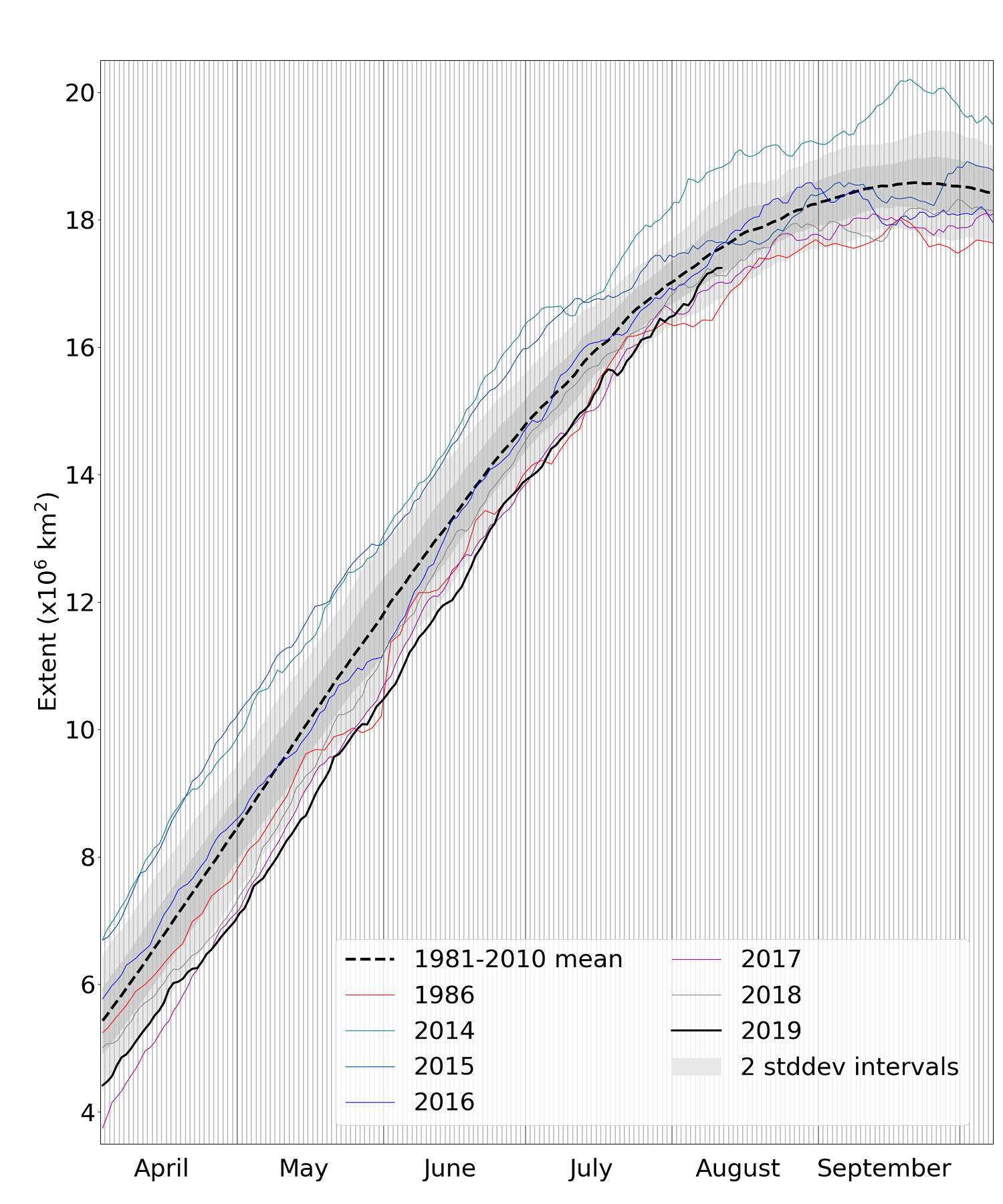 Figure 6. Daily Antarctic sea ice extent for 2019, compared with recent years, the low-ice year of 1986, and the 1981-2010 average, with ± 1 and 2 standard deviation intervals indicated by the shaded areas. Data are from NSIDC. 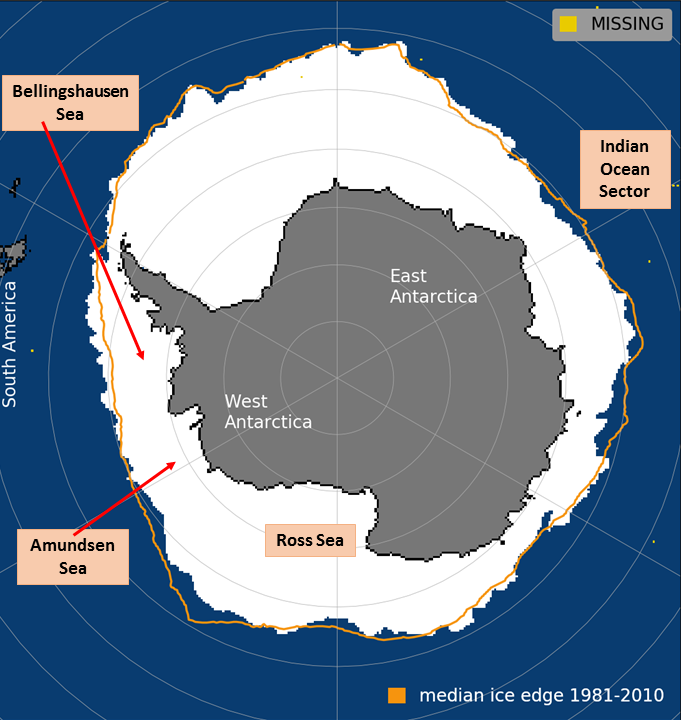 Figure 7. Antarctic sea ice extent on 11th August 2019, with 1981-2010 average extent indicated in orange, and regions referred to in the text labelled. Underlying map and data courtesy of NSIDC.