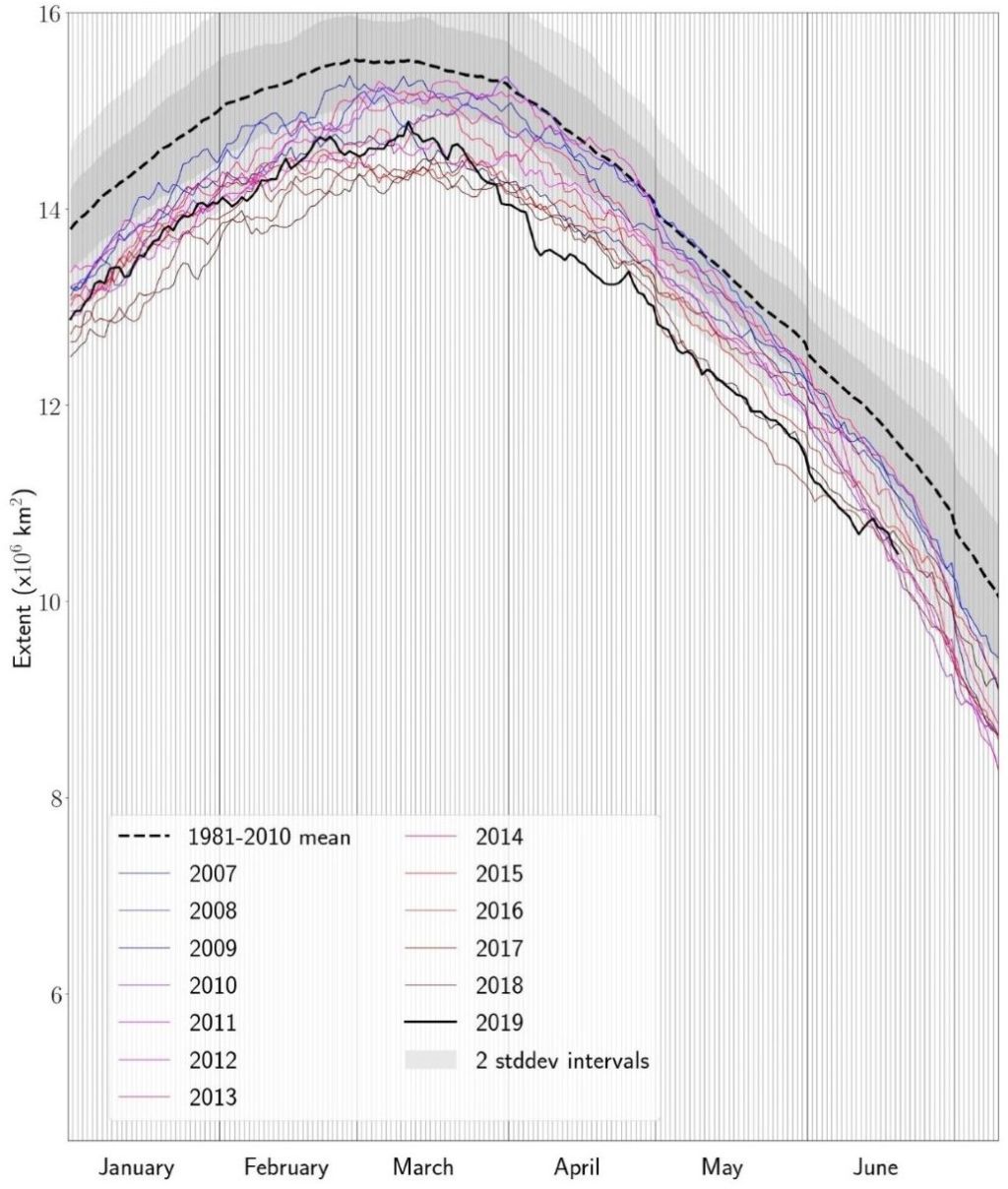 Figure 1. Daily Arctic sea ice extent for 2019, compared with recent years and the 1981-2010 average with ± 1 and 2 standard deviation intervals indicated by the shaded areas. Data are from the National Snow and Ice Data Center (NSIDC).

Extent was well below average in the Beaufort Sea, Chukchi Sea, and Barents Sea, where the ice edge had retreated much further north than the 1981-2010 average sea ice edge for the same date. It was also well below average in the Laptev and Kara seas, both of which saw extensive areas of open water east of the New Siberian Islands and north of the Gulf of Ob respectively. The East Siberian Sea was the only marginal sea of the Arctic Ocean in which sea ice retreat had not yet commenced. 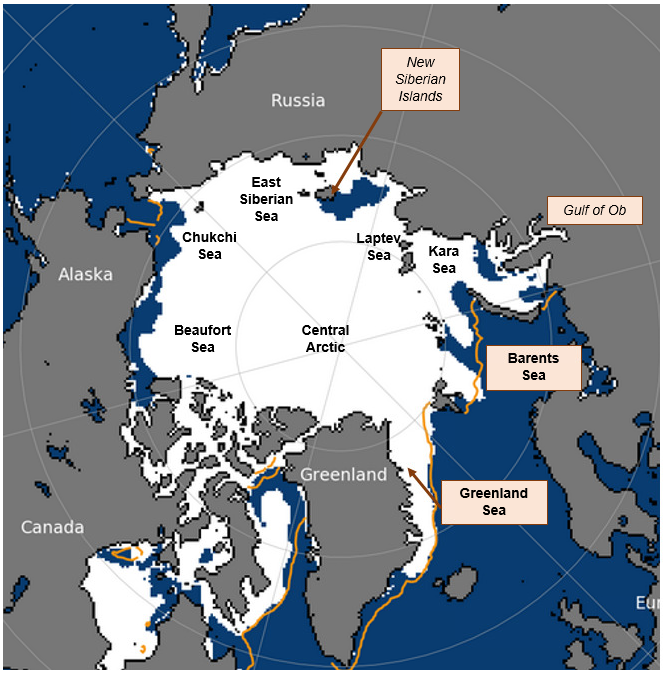 Figure 2. Arctic sea ice extent on 19th June 2019, with 1981-2010 average extent indicated in orange, and the regions referred to in the text labelled. Underlying map and data courtesy of NSIDC. 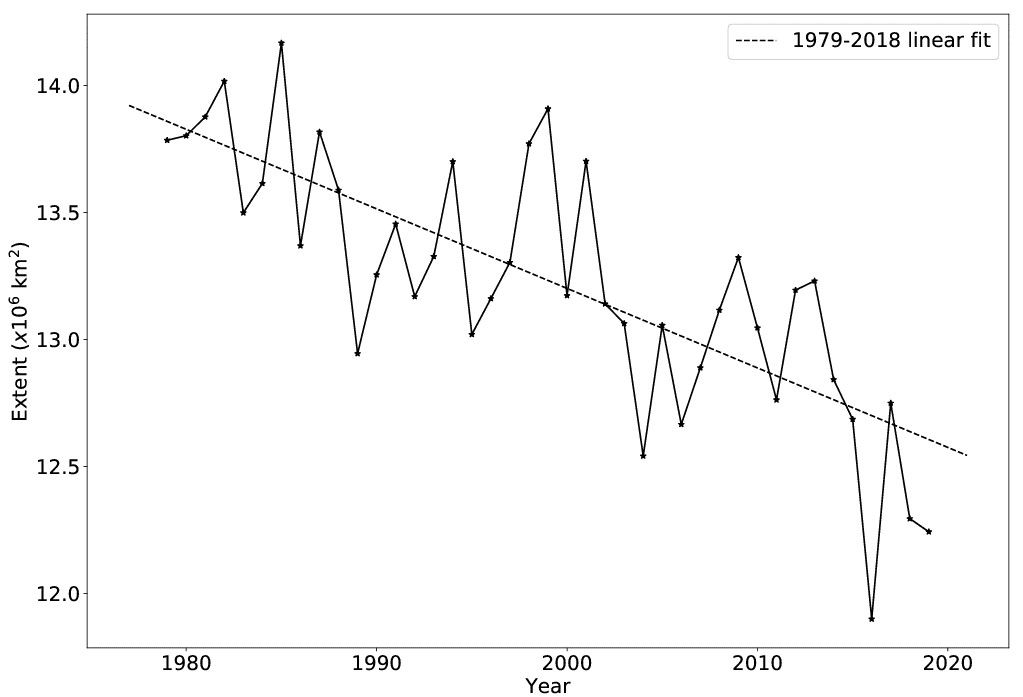 The average rate of sea ice loss during May was 49,000 square km per day, slightly higher than the 1981-2010 average of 47,000 square km per day. It is worth noting that surface temperature north of 70°N in May 2019 was the highest on record, as measured by the NCEP reanalysis.

Review of atmospheric drivers during winter and spring 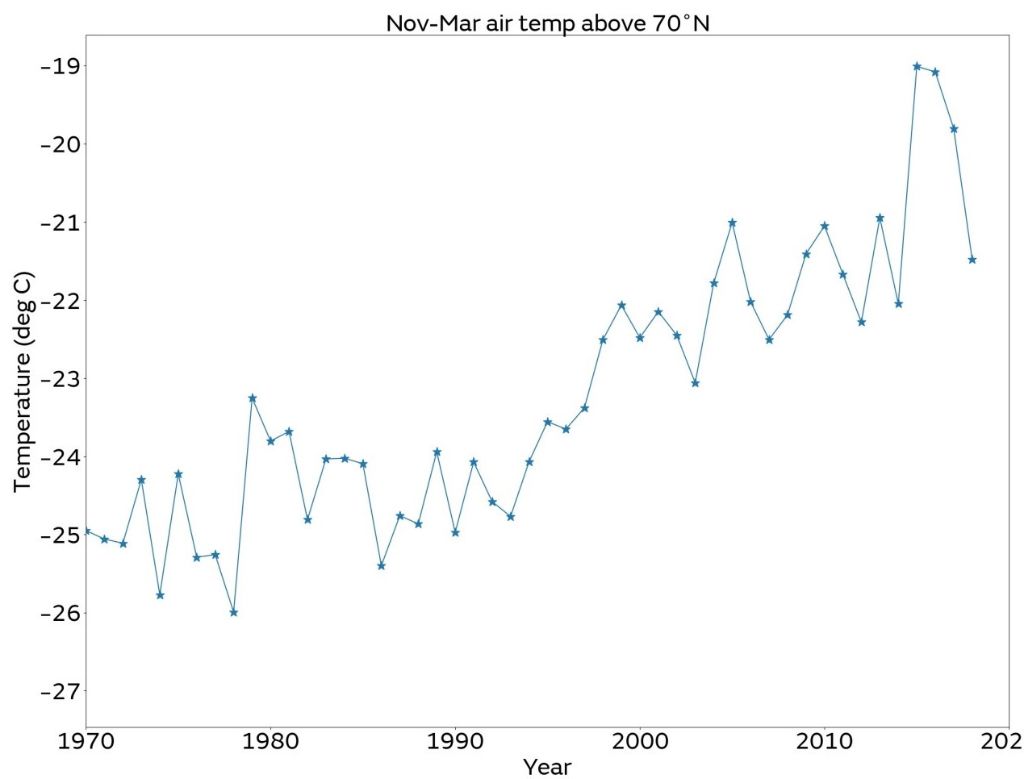 Figure 4. Average November-March surface air temperature for the region north of 70°N from 1970-present, according to the NCEP reanalysis.

The pattern of surface temperature anomaly was not uniform over the Arctic. The Canadian Basin, Beaufort Sea and Barents Sea regions experienced a very mild winter. By contrast, the East Siberian Sea and much of the rest of the Central Arctic experienced near-normal temperatures on average (Figure 5a). The surface temperature anomalies were associated with a pattern of higher-than-average sea level pressure over the North American continent, and lower-than-average sea level pressure over much of the Arctic Ocean itself, and the north coast of Siberia, with regions of mild temperatures corresponding to those where southerly winds were predominant (Figure 5b).

While sea ice extent during winter 2018-19 did not reach the extreme lows seen in recent winters, it was still well below average. The winter maximum extent of 14.78 million square km was the eighth lowest on record (the lowest being 14.41 million square km in 2017) and was 0.86 million square km below the 1981-2010 average. Notably, extent dropped sharply at the end of March, leading to a period of record low extent lasting until late April. This occurred in association with strong southerly winds in the Bering Sea and Barents Sea regions, and rapid sea ice retreat in these areas.

Measurements of sea ice thickness by CryoSat-2 suggest Arctic sea ice thickness during April 2019 was quite similar to that during April 2018 (Figure 6). Estimates of Arctic sea ice volume are also produced by the forced ice-ocean model PIOMAS (Zhang and Rothrock, 2003). These suggest that, while there was some limited recovery in ice volume during winter 2018-19 (up to March), by the end of May ice volume had fallen to levels below that of the same point in 2018.

The very warm conditions present during May 2019 are likely to be an important factor behind the rapid fall in ice thickness suggested by PIOMAS during this month, as well as the record lows in extent in early June 2019. Notably, from 7th-9th June an abrupt change in Arctic weather conditions took place, with predominantly anticyclonic (settled) conditions giving way to predominantly cyclonic (stormy) conditions. Cyclonic conditions in the Arctic in early summer are associated with reduced sea ice melt (Screen et al, 2011). This is due partly to the associated winds tending to spread the ice cover over a wider area, but may also be due to increased cloud cover preventing sunlight from melting ice directly. Hence the shift in atmospheric conditions is consistent with the observed slowing in melt rate over the past week. 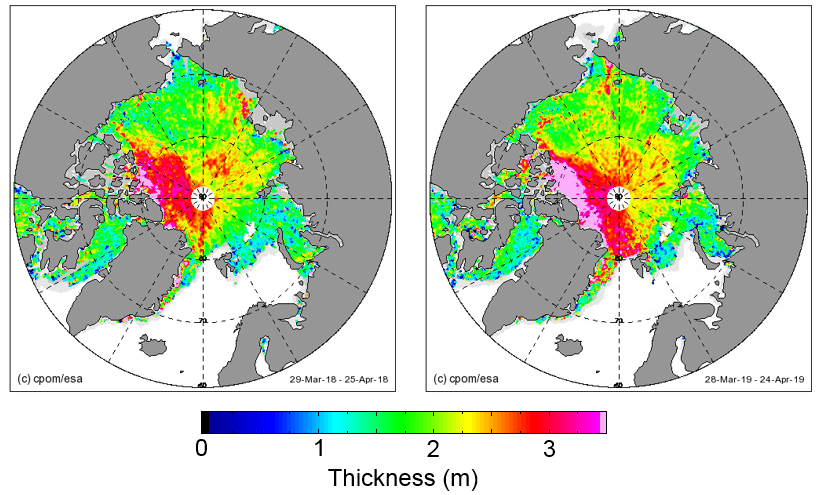 There is no significant correlation between ice extent in mid-June and the seasonal minimum extent in September. As is underlined by the recent abrupt slowing of the Arctic sea ice melt rate, the severity of summer melt is heavily dependent on Arctic weather conditions. Hence it is not possible to predict September sea ice extent with any confidence at this point in the season. 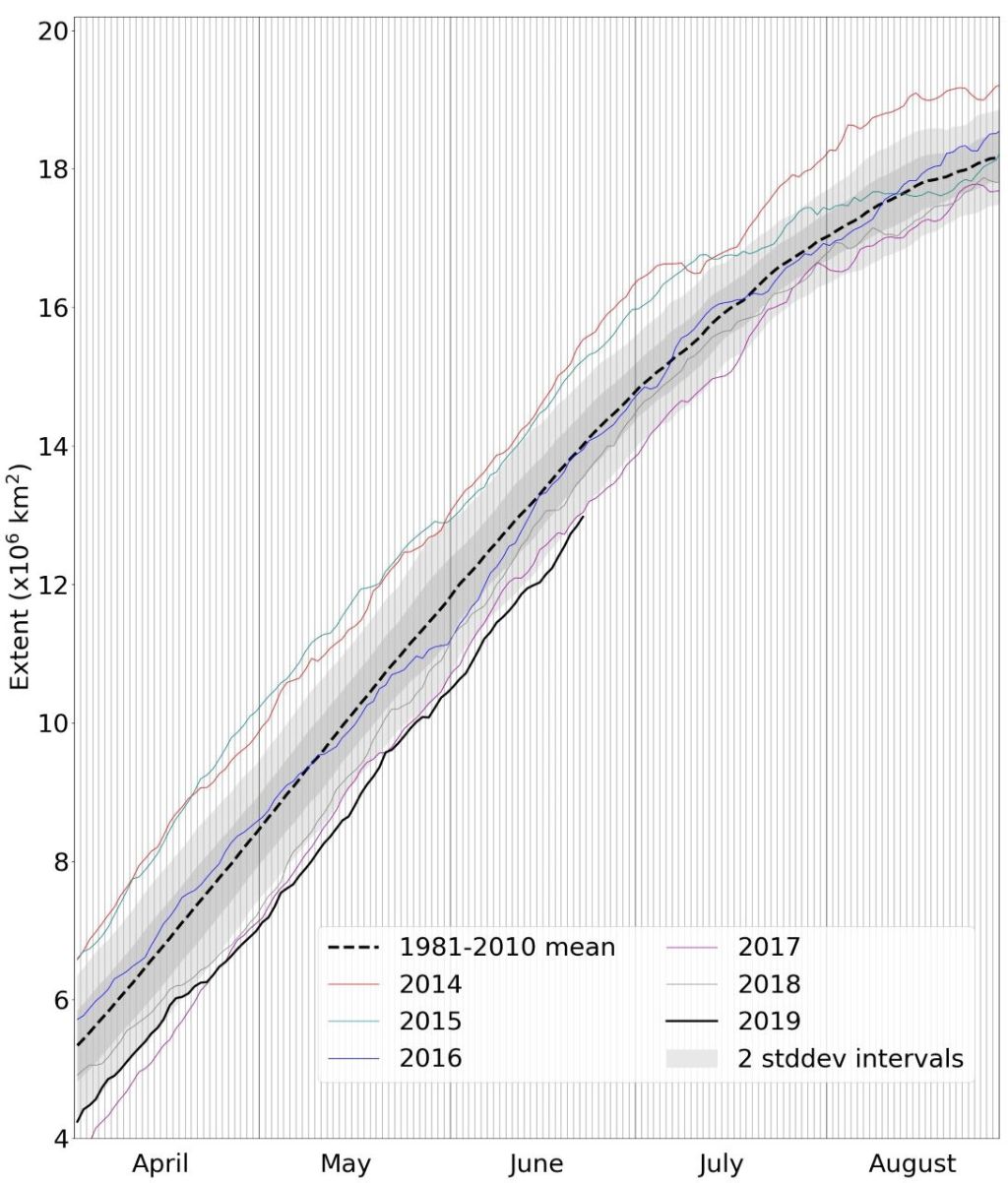 Figure 7. Daily Antarctic sea ice extent for 2019, compared with recent years and the 1981-2010 average, with ± 1 and 2 standard deviation intervals indicated by the shaded areas. Data are from NSIDC. 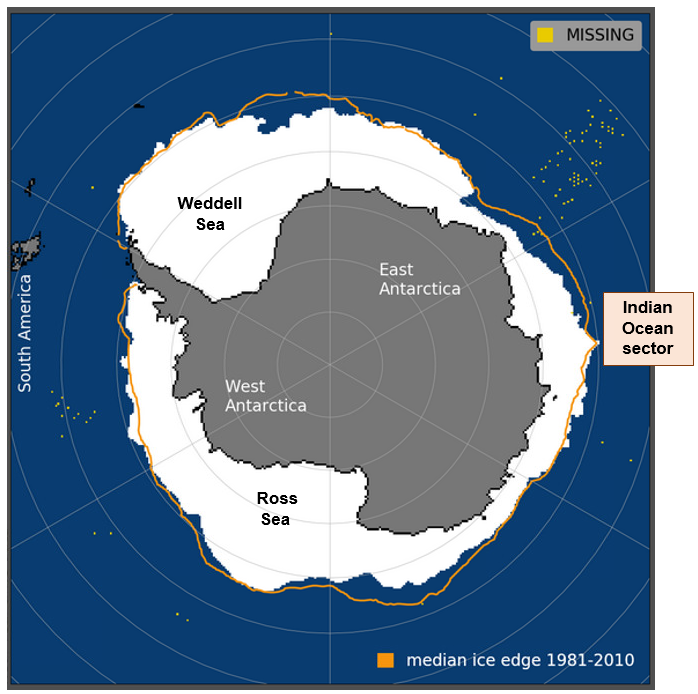 Figure 8. Antarctic sea ice extent on 19th June 2019, with 1981-2010 average extent indicated in orange, and regions referred to in the text labelled. Underlying map and data courtesy of NSIDC.