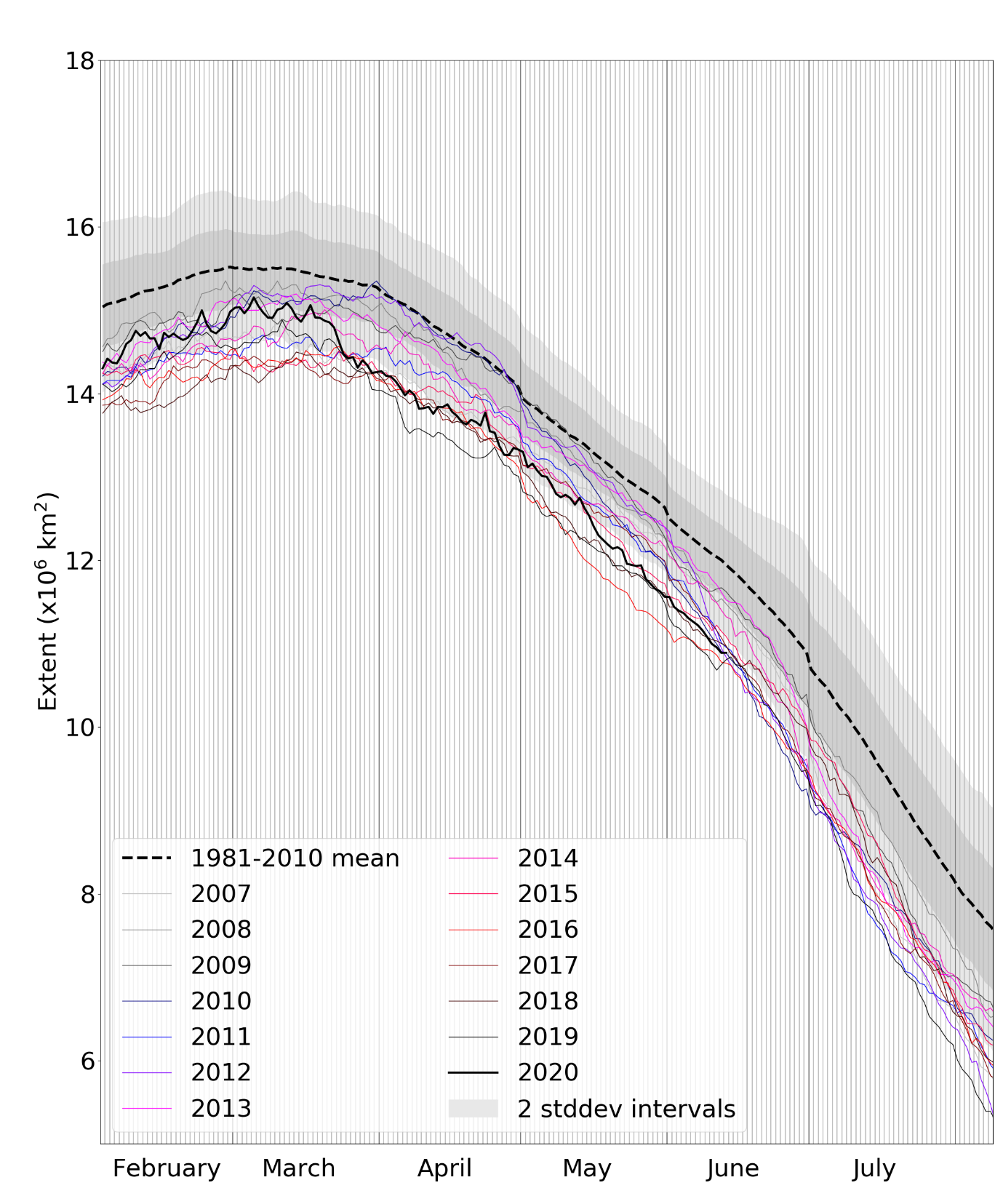 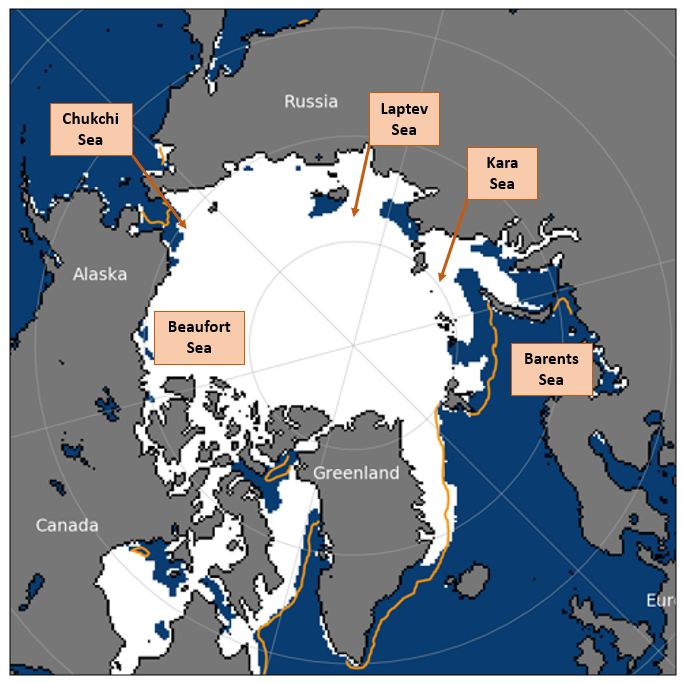 Figure 2. Arctic sea ice extent on 13th June 2020, with 1981-2010 average extent indicated in orange, and the regions referred to in the text labelled. Underlying map and data courtesy of NSIDC. 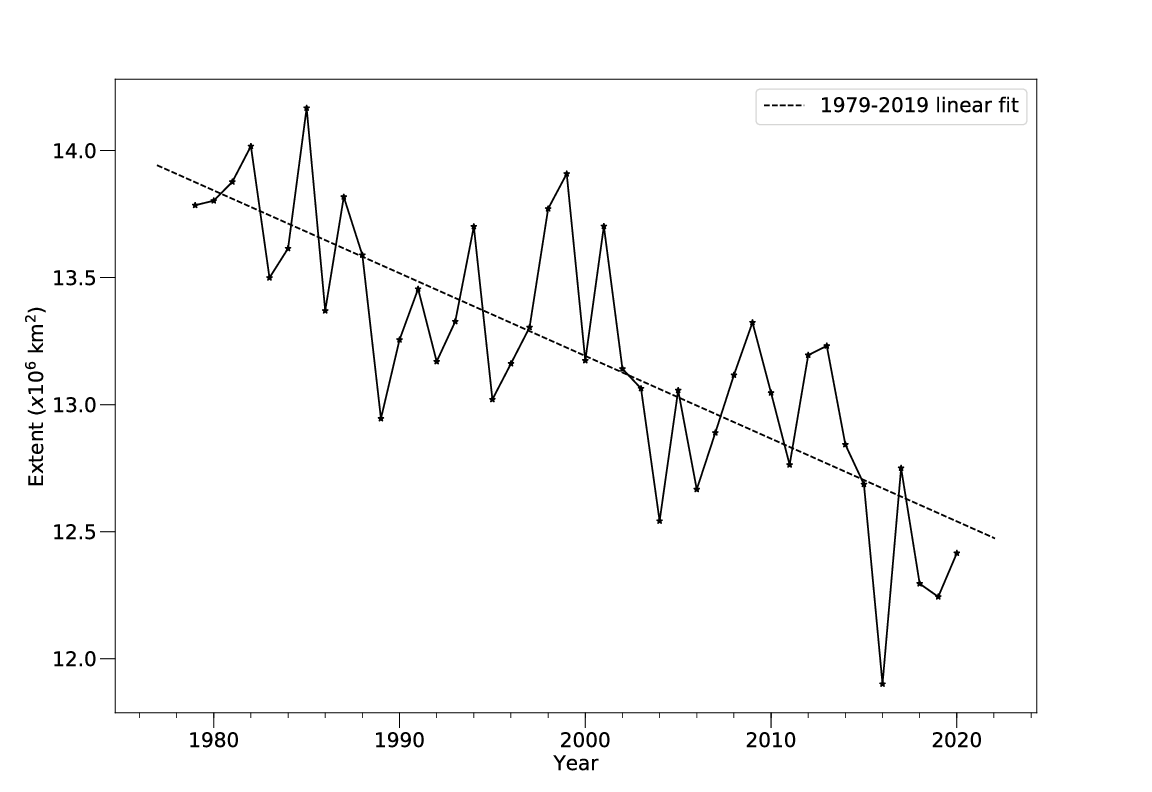 Review of atmospheric drivers during winter and spring

Winter 2019-20 was unsettled and cyclonic in the Arctic (Figure 4a). The later part of the winter was especially stormy: notably, an intense storm crossed the central Arctic from 18th-22nd March, reaching a central pressure of below 970hPa. The stormy weather may have caused particularly strong ice motion in the Transpolar Drift Stream (a feature that transports sea ice across the Arctic Ocean from Siberia towards Greenland and the Fram Strait).

Although mild relative to the 1981-2010 average, winter 2019-2020 was the coolest in the Arctic since 2012-2013, as measured by November-March average surface temperature north of 70°N (Figure 5). The Siberian side of the Arctic was warmer than average, particularly in the Kara and East Siberian Sea regions. However, much of the Beaufort Sea and Canada Basin saw near- or below-average temperatures (Figure 4b). 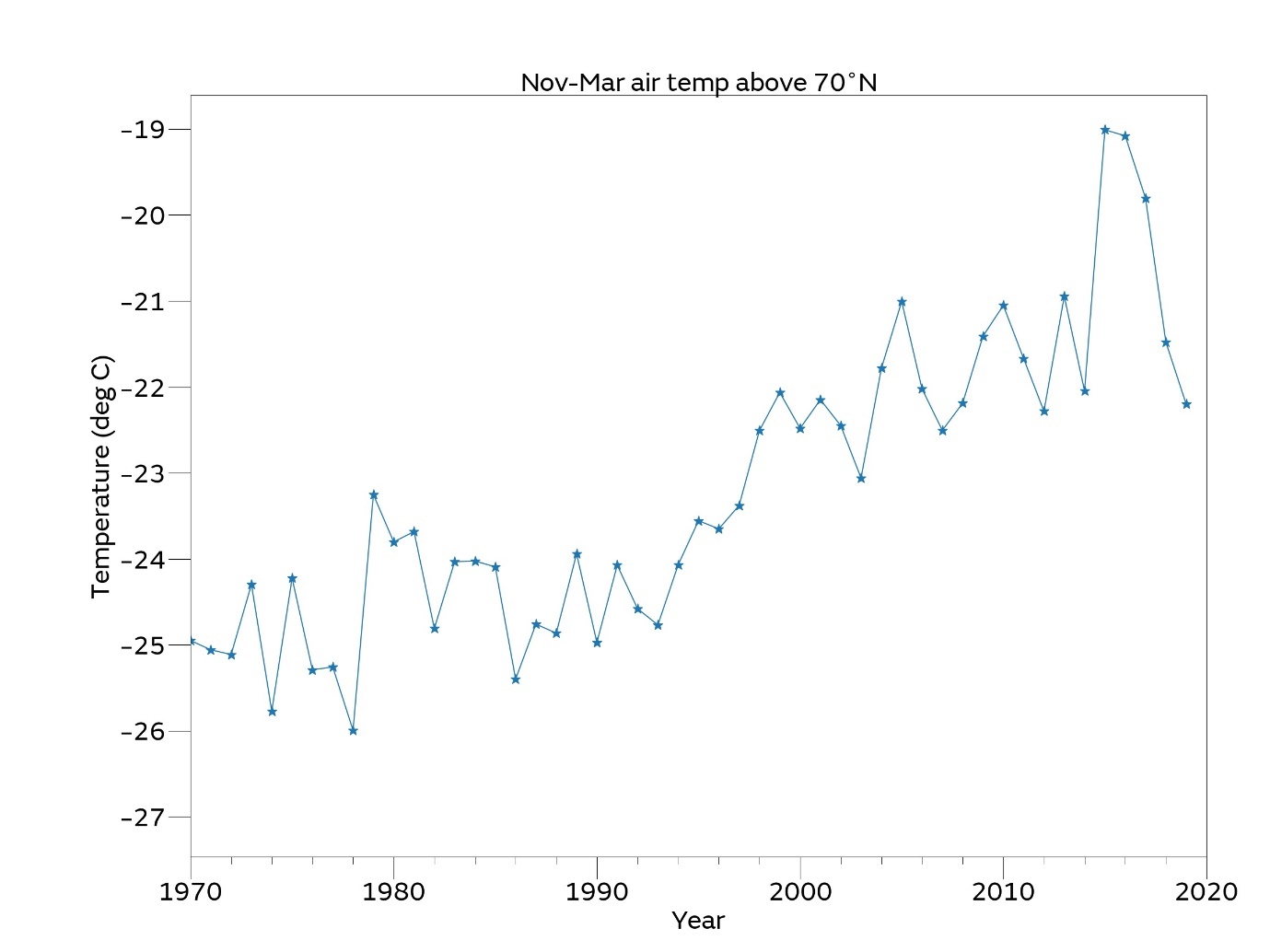 Figure 5. Average November-March surface air temperature (°C) for the region north of 70°N from 1970-present, according to the NCEP reanalysis.

April and May were also stormy and cyclonic in the Arctic, but warmer than average temperatures were much more widespread over the Arctic in these months: in fact, the April-May period was the second warmest on record north of 70°N according to the NCEP reanalysis. A recent study by Schreiber and Serreze (2020) suggests that Arctic storms tend to increase Arctic sea ice cover on average, although the effect is very modest during the spring.

Observations of sea ice thickness from CryoSat-2 during April suggest increased sea ice thickness north of Fram Strait, Greenland and the Canadian Arctic Archipelago relative to the 2016-2019 average, but decreased ice thickness in many other parts of the Arctic (Figure 6). Estimates of ice thickness from the forced ice-ocean model PIOMAS during May (Schweiger et al., 2011) show a similar picture of increased thickness near Greenland, but areas of decreased thickness are more concentrated close to the Siberian coast. The pattern of thicker ice near Greenland is likely related to the stronger transport of ice across the Arctic from Siberia to the Fram Strait observed this winter.

There is no significant correlation between ice extent in mid-June and the seasonal minimum extent in September, as the severity of summer melt is heavily dependent on Arctic weather conditions. Hence it is not possible to predict September sea ice extent with any confidence at this point in the season. However, statistical predictions based on daily extent do achieve some skill by mid-July.

Antarctic sea ice extent on 12th June 2020 was 12.97 million square km, 0.05 million square km below the 1981-2010 average (Figure 7). This follows unusually strong ice growth in the Ross and Weddell Seas during March which ended a 41-month period of below average Antarctic sea ice extent. The ice growth was driven by offshore winds associated with strong and persistent low pressure systems in these regions. 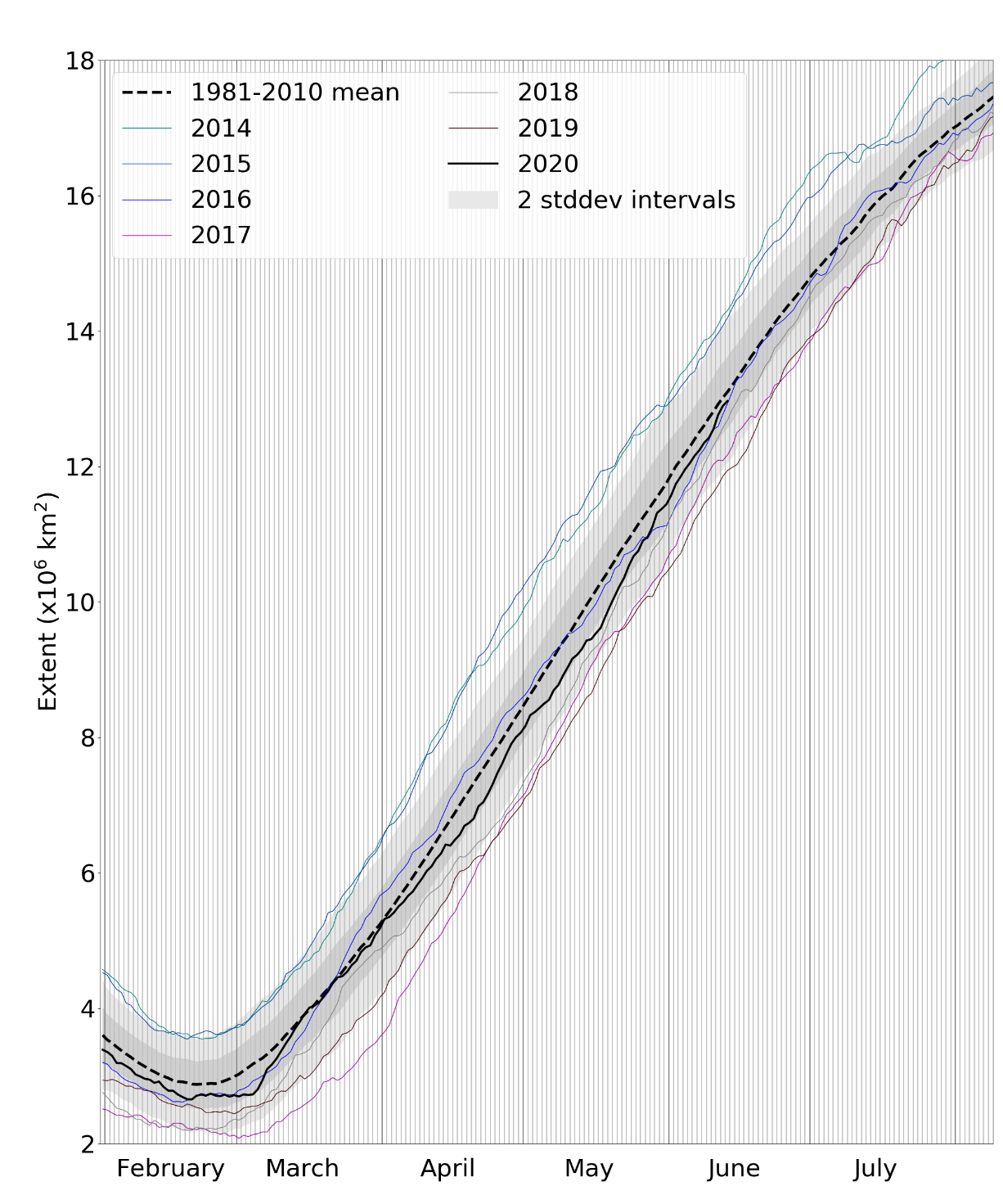 Figure 7. Daily Antarctic sea ice extent for 2020, compared with recent years and the 1981-2010 average with ± 1 and 2 standard deviation intervals indicated by the shaded areas. Data are from the National Snow and Ice Data Center (NSIDC).

The overall near-average extent conceals some spatial variability (Figure 8), with some sectors of the Southern Ocean displaying above-average extent, and others below average. 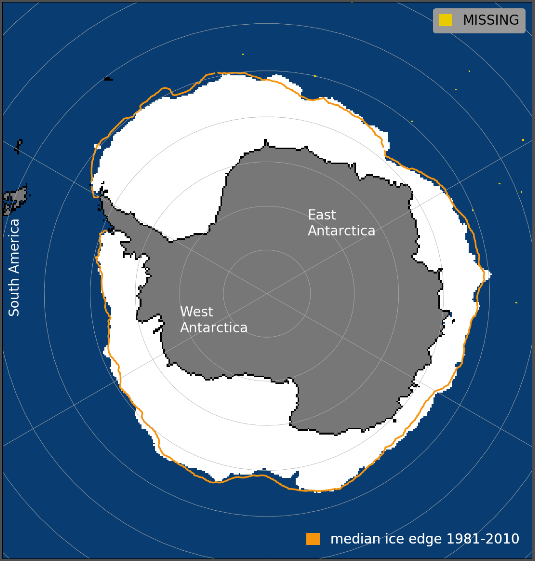 Figure 8. Antarctic sea ice extent on 13th June 2020, with 1981-2010 average extent indicated in orange, and the regions referred to in the text labelled. Underlying map and data courtesy of NSIDC.