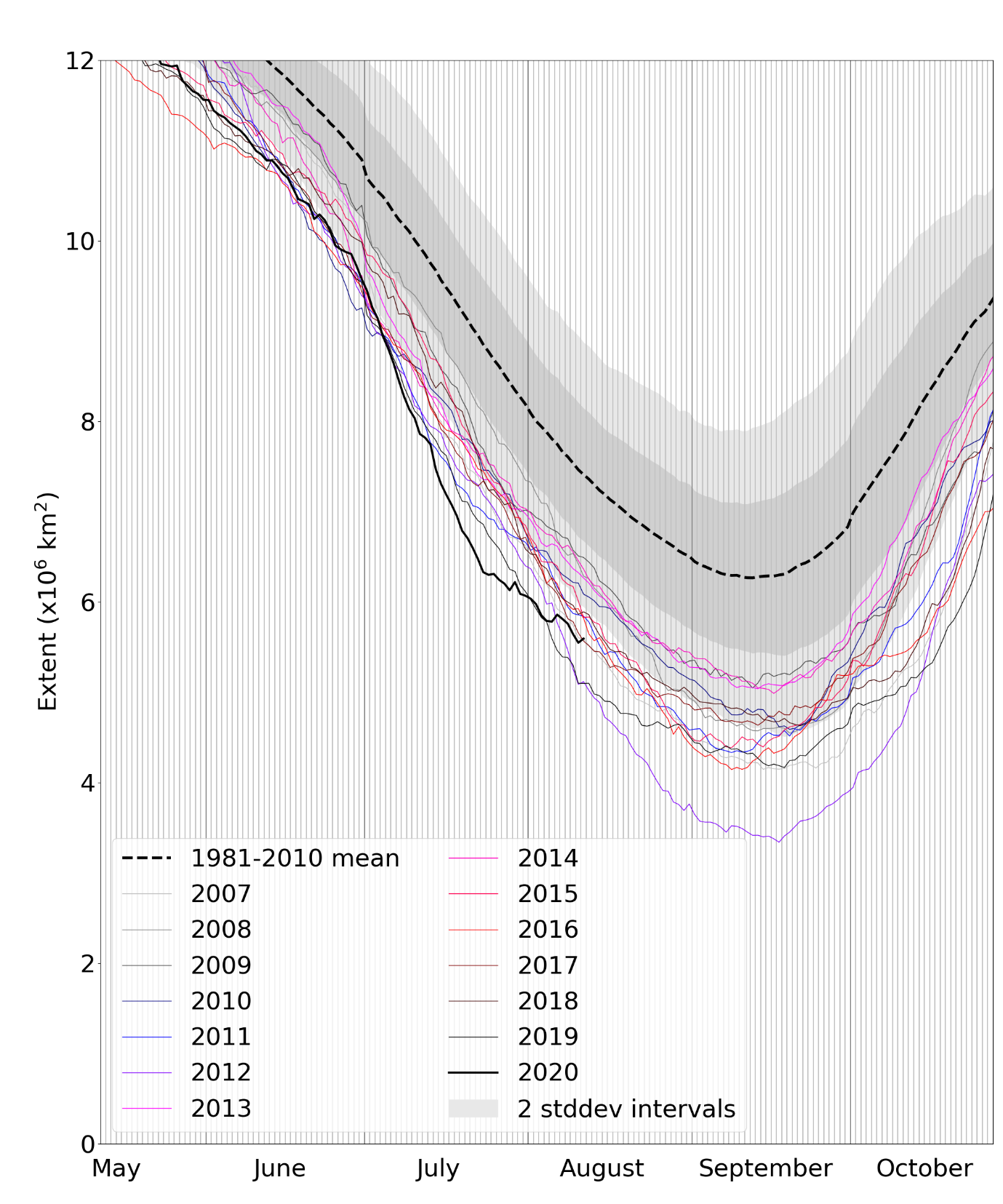 Extent was exceptionally low in all marginal seas north of Siberia (Barents, Kara, Laptev and East Siberian Seas), but was closer to average in the Beaufort and Chukchi Seas (Figure 2). 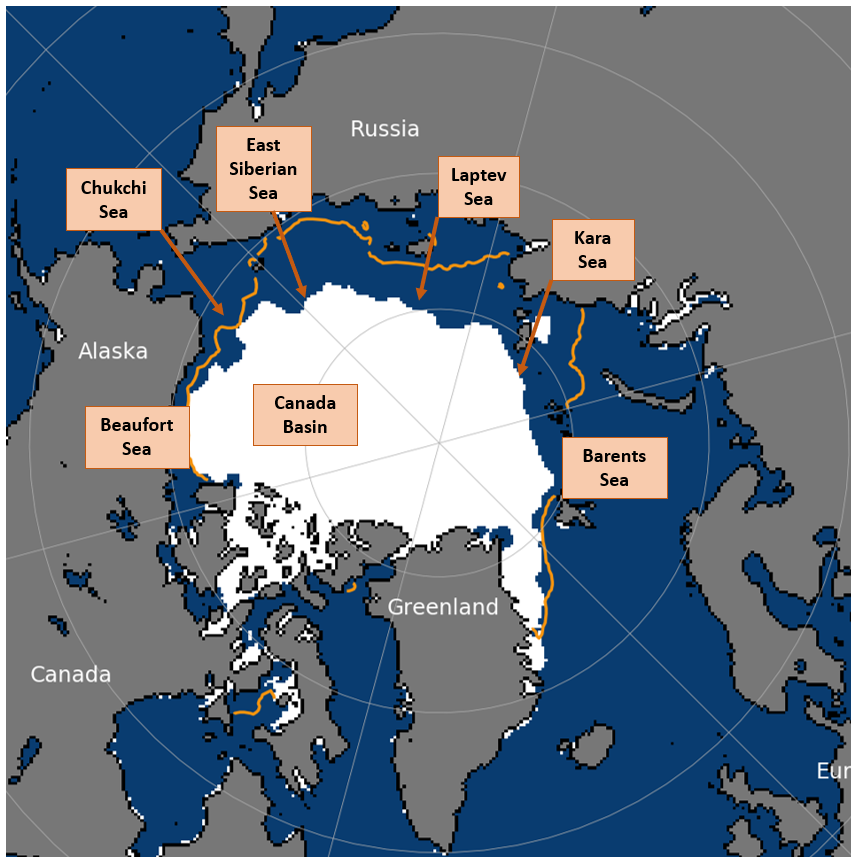 Figure 2. Arctic sea ice extent on 10th August 2020, with 1981-2010 average extent indicated in orange, and the regions referred to in the text labelled. Underlying map and data courtesy of NSIDC. 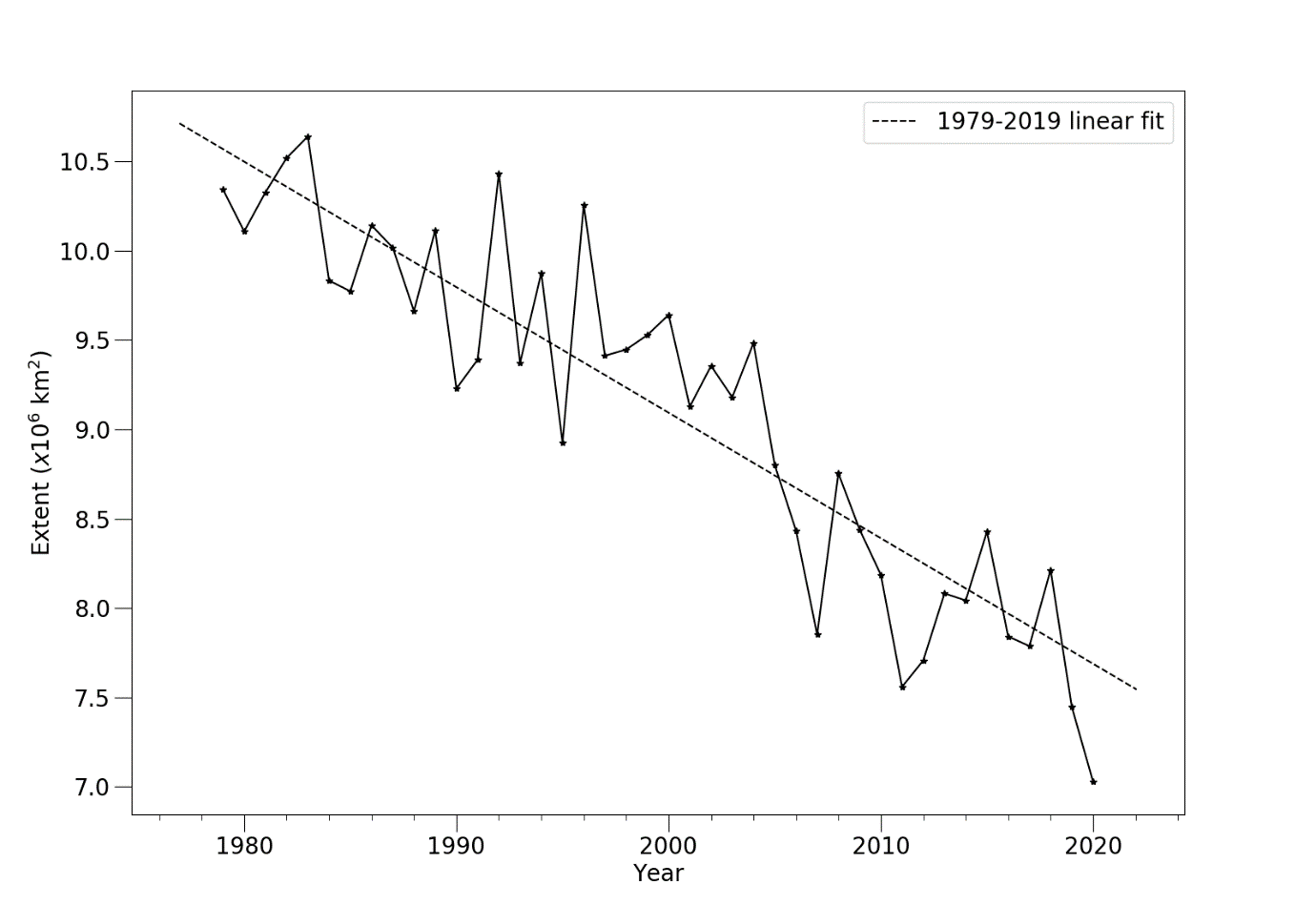 Sea ice melt during the first half of July was exceptionally fast, continuing a period of fast ice loss that started in late June, largely focussed in the Laptev, and later the East Siberian, Sea. This was likely caused by prolonged warm southerly winds from Siberia associated with the notable Siberian heatwave (see also July briefing). In the first three weeks of July two more notable bursts of warm advection from Siberia took place, but melting may have been assisted by a powerful area of high pressure that sat over the central Arctic Ocean during that time (Figure 4a). This high pressure is likely to have increased the amount of sunlight melting the ice, as well as blocking the passage of cyclones, which are thought to be conducive to ice retention during summer (Screen et al., 2011; Schreiber and Serreze, 2020). Air temperatures at 925mb (a height of about 1km in the atmosphere) were also very high across the Arctic Ocean during the first three weeks of July (Figure 4b).

During the last ten days of July, ice loss slowed abruptly in response to changes in the weather. Around 21st July the high pressure rapidly broke down, and low-pressure systems moving north from Western Siberia and Alaska began to dominate the Arctic Ocean weather (Figure 4c). From 27th-29th July an unusually intense summer cyclone developed in the Beaufort Sea, reaching a minimum central pressure of 975 hPa on 28th July. The cyclone is likely to have contributed to the reduced loss in ice extent by spreading out the existing ice over a wider area. However, melting itself may also have slowed, as upper air temperatures from 21st-31st July were closer to average than from 1st – 20th, particularly over the Beaufort Sea and Canada Basin (Figure 4d). 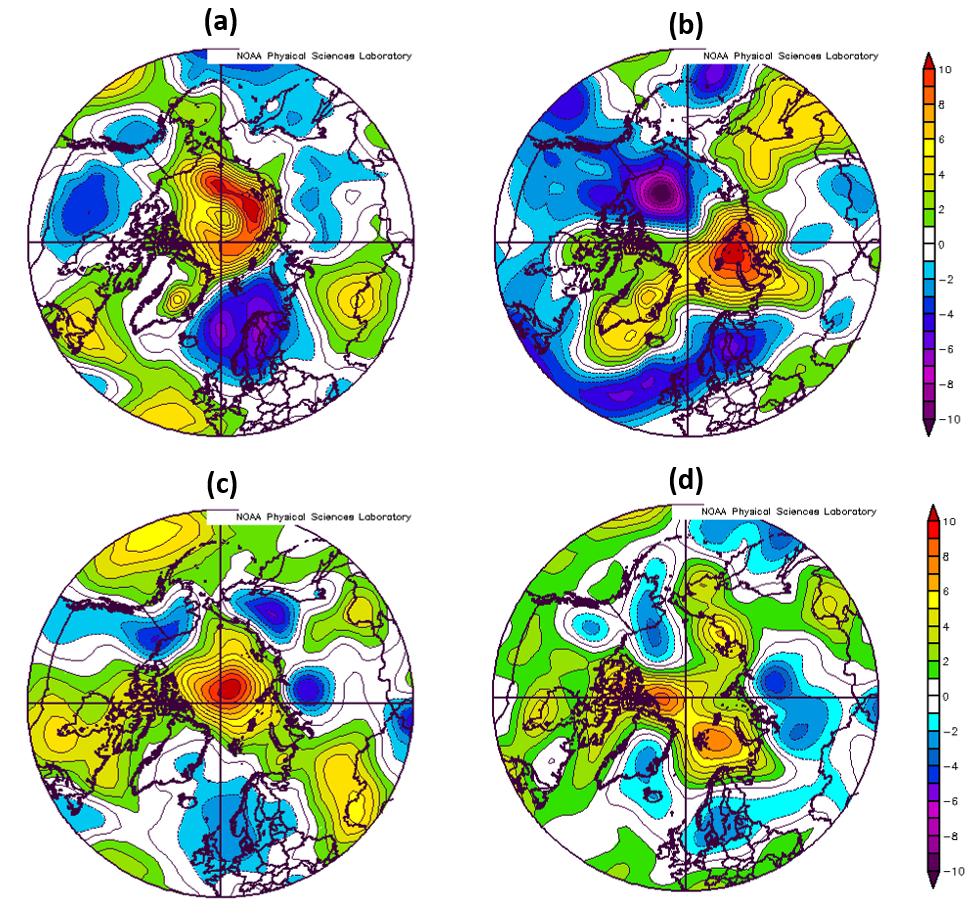 It is now very likely that 2020 will see another notably low September sea ice extent, and quite likely that 2020 will be one of the lowest 4 September extents on record. Although still a possibility, a new record low is unlikely this year. However, there is still considerable uncertainty in the predictions as the weather during August will have a strong impact on the eventual extent of melting.

The above summary is based on evidence from a variety of predictions, described below and shown in Figure 5: 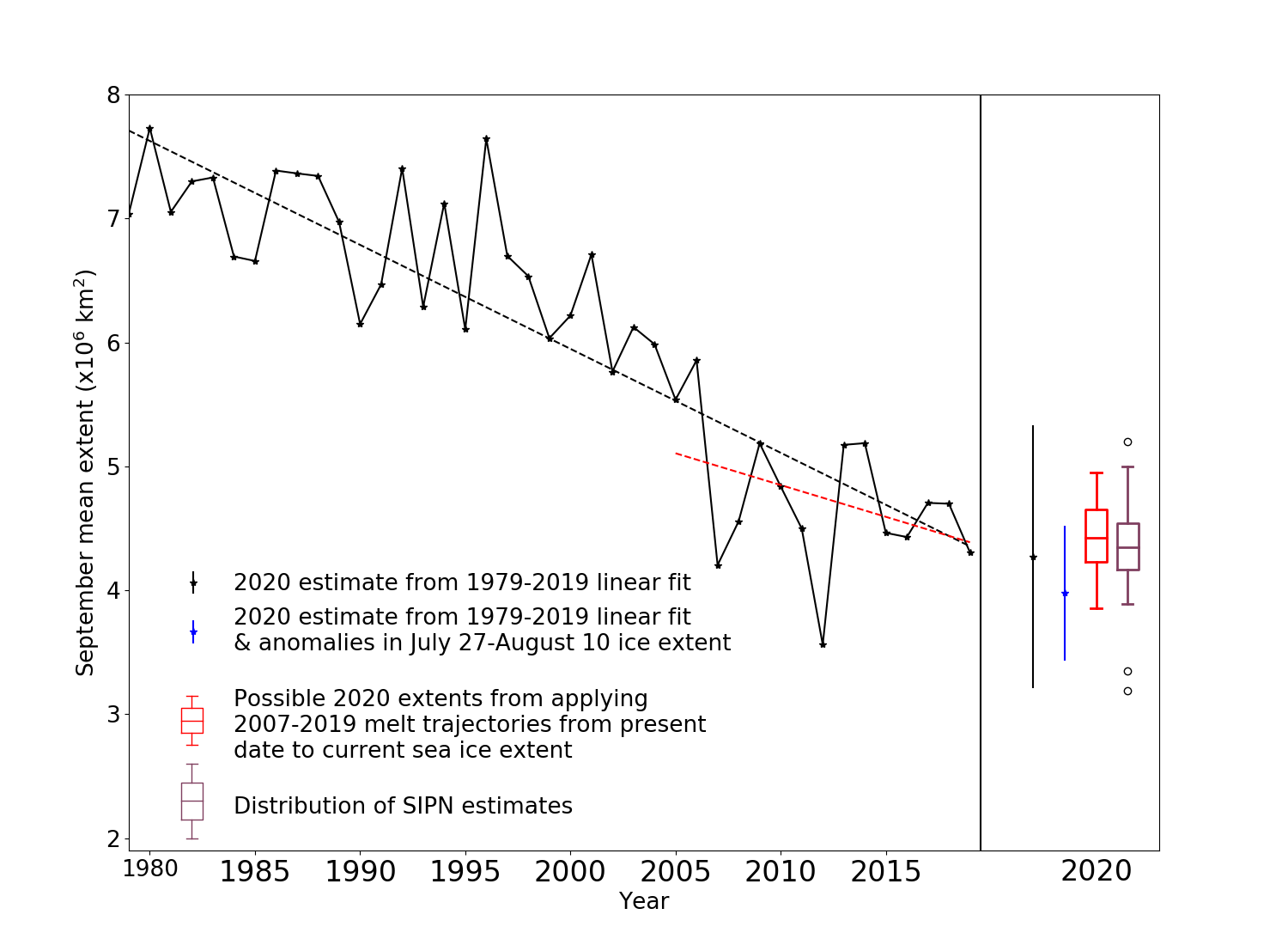 Figure 5. September median Arctic sea ice extent since satellite records began in 1979 from the HadISST1.2 dataset (Rayner et al., 2003), with SIPN Sea Ice Outlook and statistical predictions for September 2019. For the statistical predictions, error bars represent twice the standard deviation of September mean ice extent about the trend lines with respect to which the estimates are taken. The Sea Ice Outlook is shown as a boxplot indicating range, median and quartiles of the 33 predictions submitted. The distribution obtained from applying 2007-2019 melt trajectories to the current extent is shown similarly. Values more than 1.5 interquartile ranges from the first and third quartiles are shown as outliers. 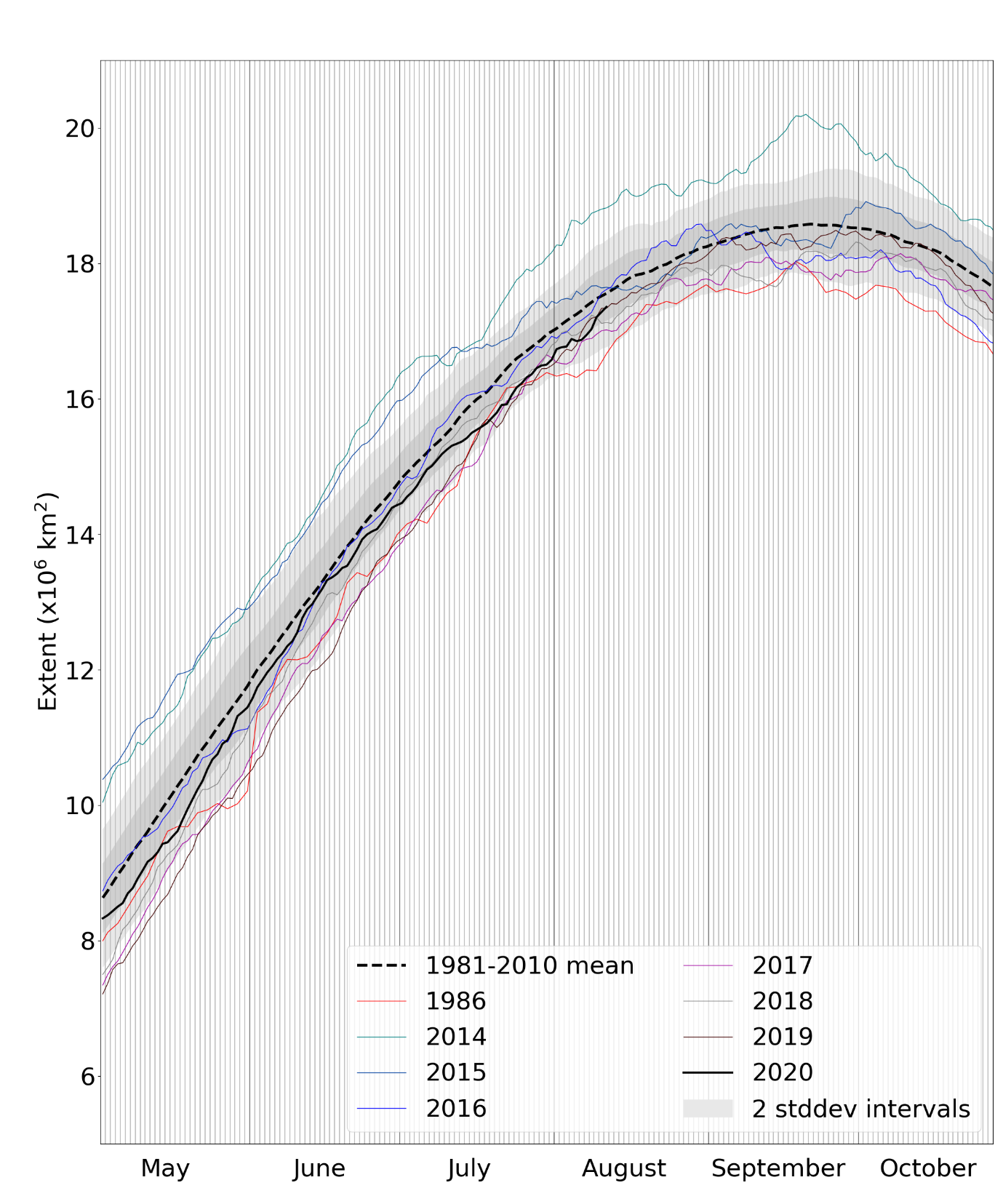 Figure 6. Daily Antarctic sea ice extent for 2020, compared with recent years, the low ice year of 1986, and the 1981-2010 average, with ± 1 and 2 standard deviation intervals indicated by the shaded areas. Data are from NSIDC. 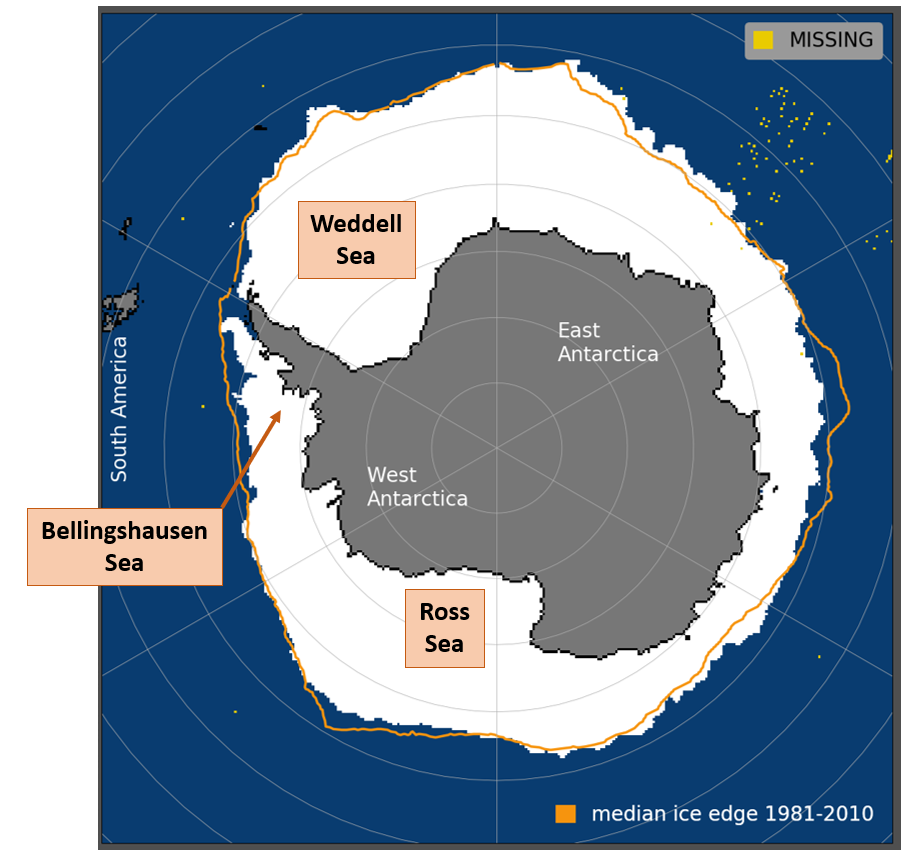 Figure 7. Antarctic sea ice extent on 10th August 2020, with 1981-2010 average extent indicated in orange, and regions referred to in the text labelled. Underlying map and data courtesy of NSIDC.