Extent was exceptionally low in the Laptev Sea, which saw very fast ice retreat during the month of June due to very mild weather in this region (discussed below). Extent was also very low in the Kara Sea and East Siberian Sea, and was slightly below average in the Chukchi and Beaufort Seas (Figure 2). 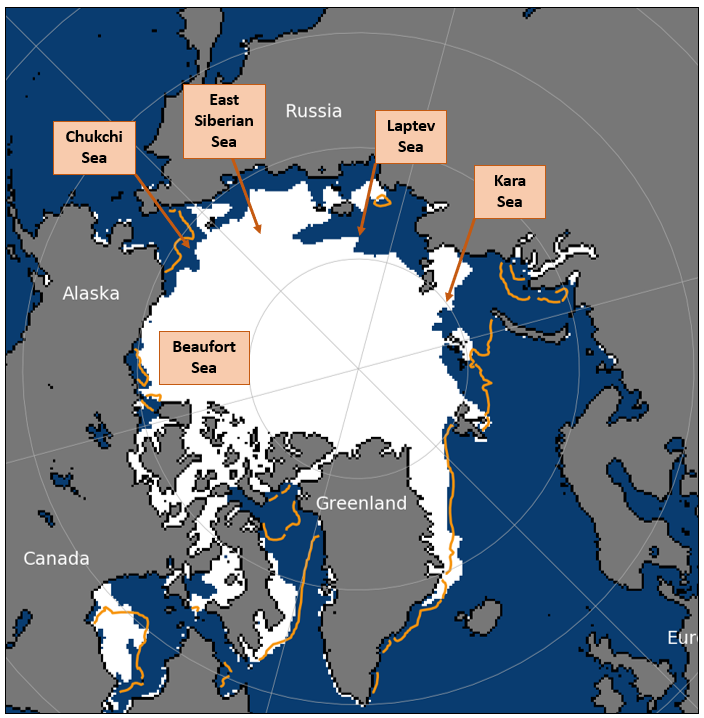 Figure 2. Arctic sea ice extent on 11th July 2020, with 1981-2010 average extent indicated in orange, and the regions referred to in the text labelled. Underlying map and data courtesy of NSIDC.

June 2020 was another unsettled, stormy month over most of the Arctic Ocean (Figure 4a), with near-average upper air temperatures across most of the Arctic Ocean (Figure 4b). However, a ridge of high pressure extended from Eastern Siberia over the Chukchi and Beaufort Seas; to the west of this ridge, persistent southerly winds over the Laptev Sea drove very mild air over the sea ice, explaining the rapid retreat of ice in this region. The same weather pattern caused a provisional record high temperature of 38C in the Siberian town of Verkhoyansk, previously known as the location of the coldest recorded temperature in the Northern Hemisphere. Continued southerly winds into the start of July saw ice in the East Siberian Sea retreat rapidly also, resulting in the current record-low sea ice extent.

There are a variety of means by which September average sea ice extent can be predicted at this point in the melt season. Some of these are displayed in Figure 5, and described below:

Figure 5. September median Arctic sea ice extent since satellite records began in 1979 from the HadISST1.2 dataset (Rayner et al., 2003), with SIPN Sea Ice Outlook and statistical predictions for September 2019. For the statistical predictions, error bars represent twice the standard deviation of September mean ice extent about the trend lines with respect to which the estimates are taken. The Sea Ice Outlook is shown as a boxplot indicating range, median and quartiles of the 33 predictions submitted. Values more than 1.5 interquartile ranges from the first and third quartiles are shown as outliers.

Looking at the statistical prediction in more detail, the central prediction of 4.18 would, if verified, represent the second-lowest September extent on record, narrowly ahead of 4.20 in 2007. The lower bound of the prediction, 3.37 million sq km, would if verified represent a record low September ice extent, comfortably ahead of 3.56 in 2012.

The predictions compiled for the SIPN report in June do not yet show a heightened probability of a record minimum September extent being recorded in 2020. However, these predictions do not take account of the rapid sea ice loss observed in late June and early July; the predictions compiled for the July report are likely to be somewhat lower. Melt rates between now and September will be highly dependent on Arctic weather patterns over the remainder of the summer. For example, one factor causing uncertainty is likely to be whether the blocking high pressure system observed over East Siberia during late June and early July persists for many more weeks, or whether circulation in the region becomes more zonal. Zonal circulation describes weather in which the wind direction is from east or west, and tends to imply less exchange of warm air with midlatitudes.

Figure 6. Daily Antarctic sea ice extent for 2020, compared with recent years, the low ice year of 1986, and the 1981-2010 average, with ± 1 and 2 standard deviation intervals indicated by the shaded areas. Data are from NSIDC.

Extent was very low in the Bellingshausen Sea, but this was countered by higher than average extent in other parts of the Southern Ocean, for example the eastern Ross Sea and the Weddell Sea (Figure 7). 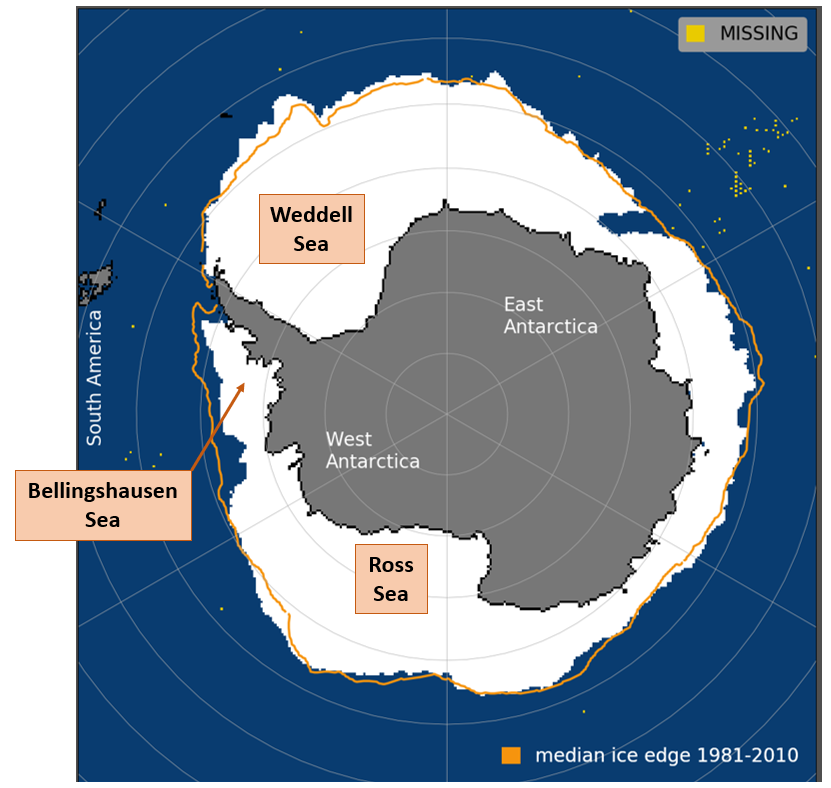 Figure 7. Antarctic sea ice extent on 11th July 2020, with 1981-2010 average extent indicated in orange, and regions referred to in the text labelled. Underlying map and data courtesy of NSIDC.