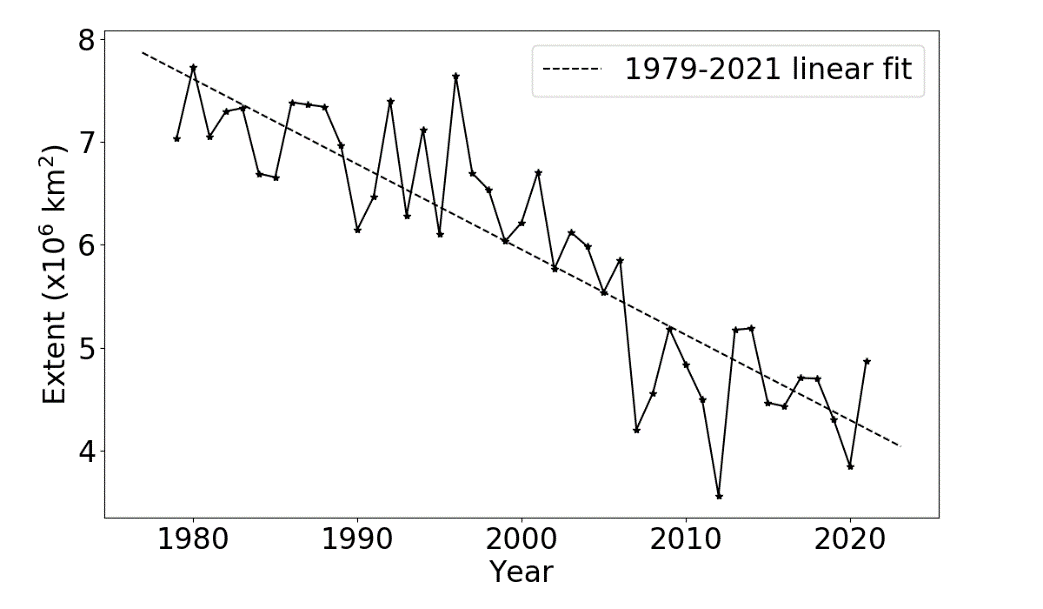 Extent at minimum was well below average in the Barents, Kara, Laptev and East Siberian Seas north of Siberia (Figure 2). While it was nearer average in the Beaufort and Chukchi Seas north of Alaska, much of the ice surviving in these regions was rather dispersed, and in an advanced state of melting. 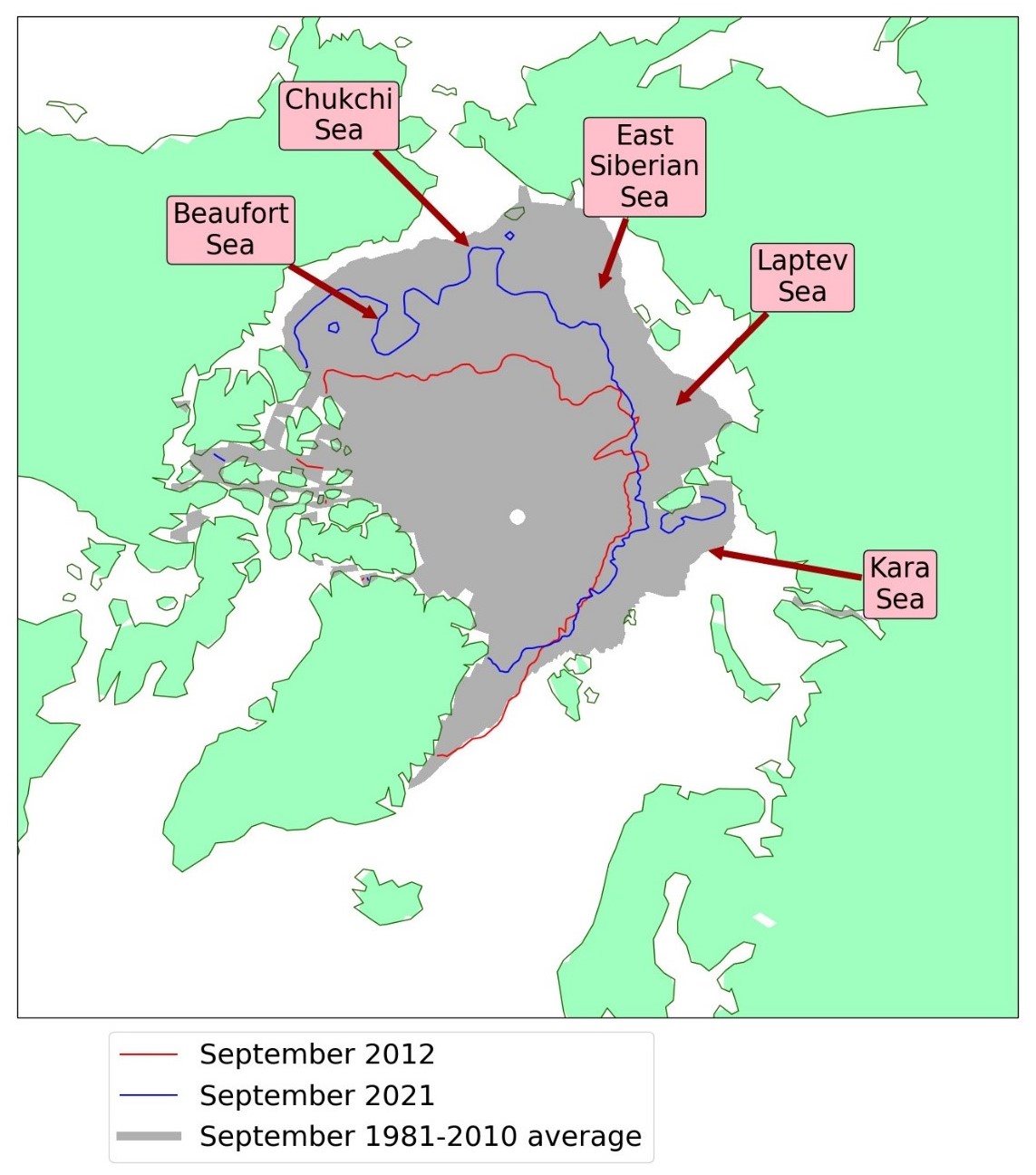 Summer 2021 was warmer than the 1981-2010 average, but substantially cooler than those of 2019 and 2020, which were successive record warm summers (Figure 3). The summer was consistently stormy throughout most of the Arctic, with mean sea level pressure lower than average everywhere except in the East Siberian Sea (Figure 4a). The Laptev Sea saw the highest temperature anomalies (Figure 4b), with a small region exceeding +3°C relative to the 1981-2010 average, partly due to very warm conditions from late June to early July associated with a heatwave in Eastern Siberia. On the other hand, parts of the Beaufort Sea saw below-average temperatures. 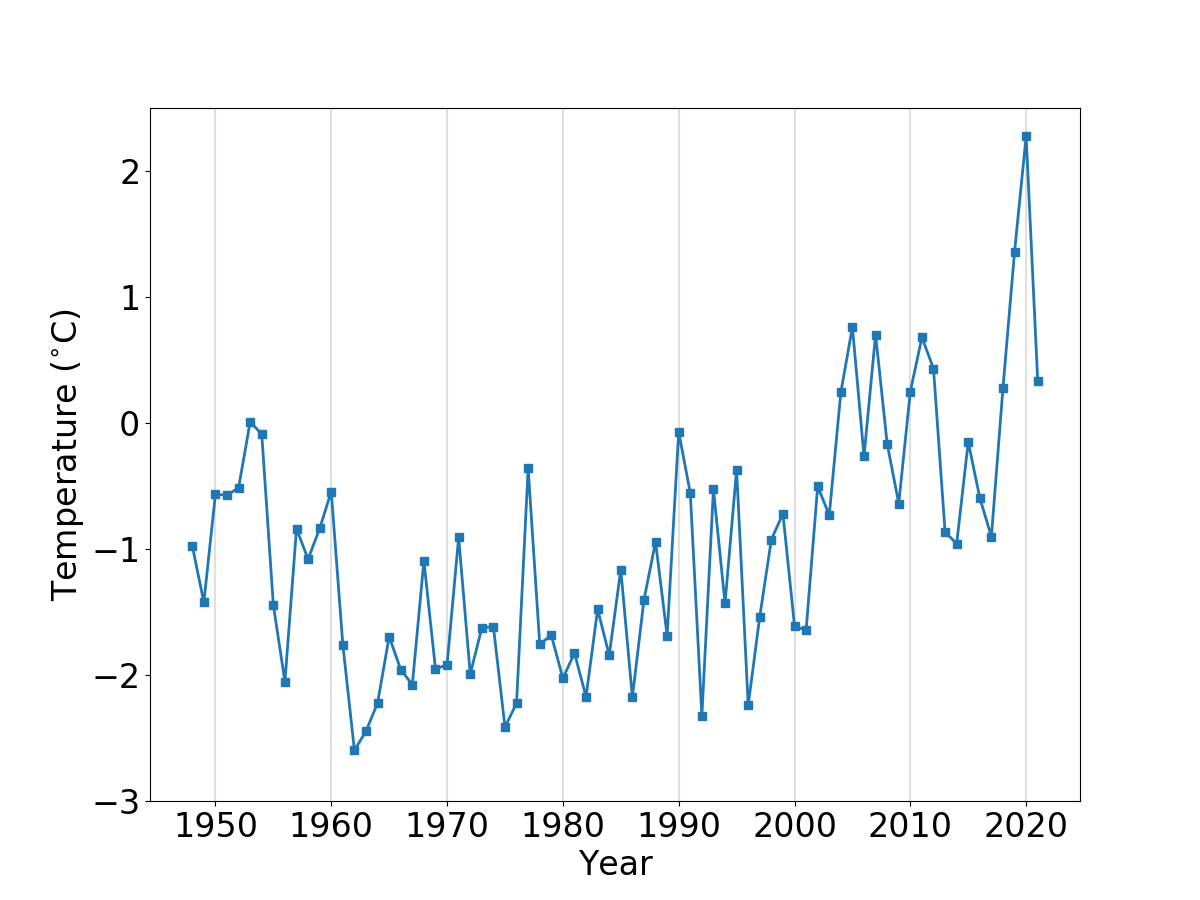 The rate of sea ice melt relative to average varied throughout the season, although less dramatically than during Summer 2020. Faster than average sea ice melt mainly occurred during the first half of the melt season (Figure 5), associated particularly with rapid melting in the Laptev Sea. From mid-July to late August ice melt was somewhat slower than average. This change was associated with an atmospheric circulation shift, with the focus of storms tending to move from the Central Arctic to the Beaufort and Chukchi Seas, causing northerly winds over the Laptev and East Siberian Seas and likely slowing melting. From late August until the minimum sea ice extent in mid-September, melting returned to above-average levels, associated with degradation of the ice in the Beaufort and Chukchi Seas. 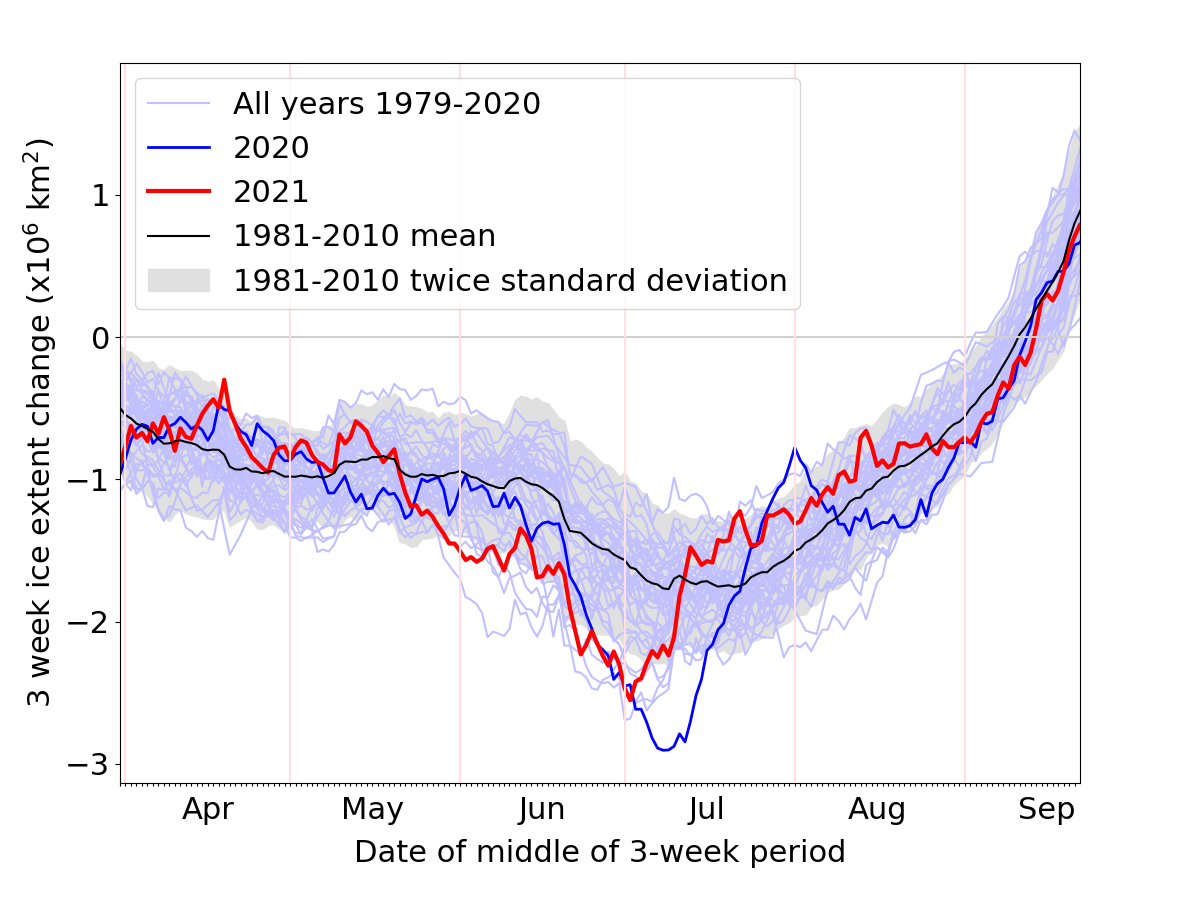 During the summer, the Sea Ice Prediction Network (SIPN) collates predictions of September Arctic sea ice extent from scientific centres around the world and publishes these predictions in a series of Sea Ice Outlooks (SIO), in June, July and August. In 2021, the observed September extent fell towards the higher end of the ranges of predictions for all three outlooks (Figure 6). While the main body of predictions tended to converge as the season progressed (with an interquartile range of 4.17-4.53 in August comparing to 4.07 to 4.69 in June), they converged to a range considerably lower than the eventual September extent. This is a mirror image of the performance of 2020, when predictions converged to a range higher than the eventual extent. It may be partly caused by the timing of melt: the first half of summer 2021 saw well-above average melting rates (Figure 5), but from mid-July to late August the rate of melting was consistently lower than average. Predictions were likely substantially influenced by the earlier fast melting, with little opportunity for the later slow melting to inform even the August predictions.

The reduced performance of the SIPN predictions in 2020 and 2021 is probably also related to these two years displaying quite large departures, in opposite directions, from the linear trend (Figure 1). Stroeve et al. (2014) found that predictions tended to perform more poorly in years when the September extent fell a long way from the linear trend; much larger departures were observed in 2012 and 2013, and predictions performed considerably more poorly in these years than was the case in 2020 and 2021. 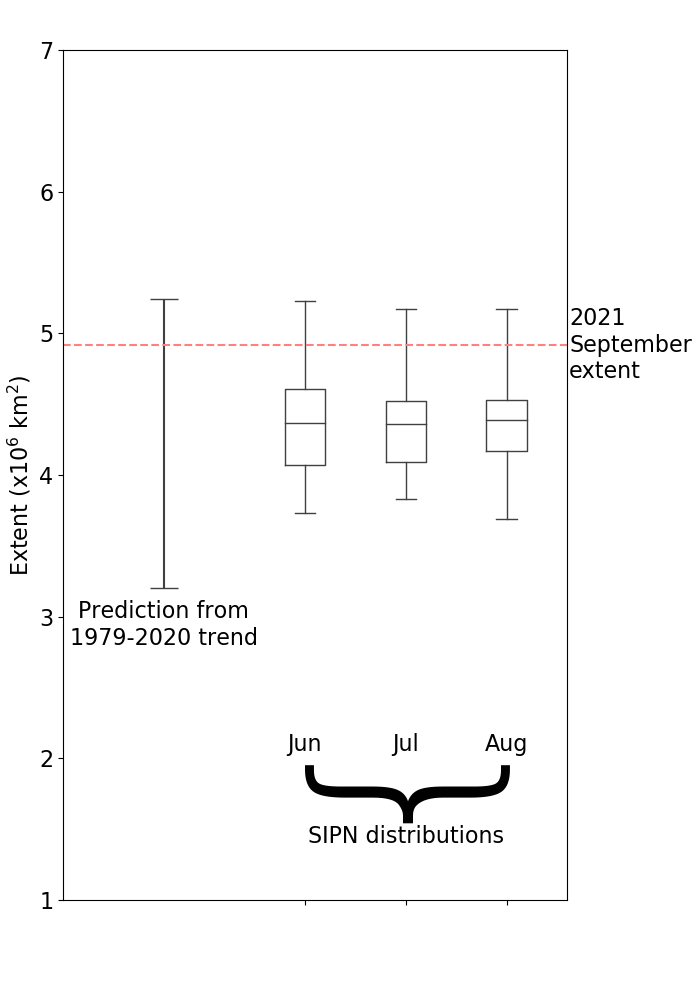 Figure 6. Arctic sea ice extent for September 2021 according to HadISST1.2 (red line), compared to an extrapolation from the long-term linear trend (left) and all the predictions submitted to the three SIO reports (maximum, minimum, median and quartiles from each distribution shown). 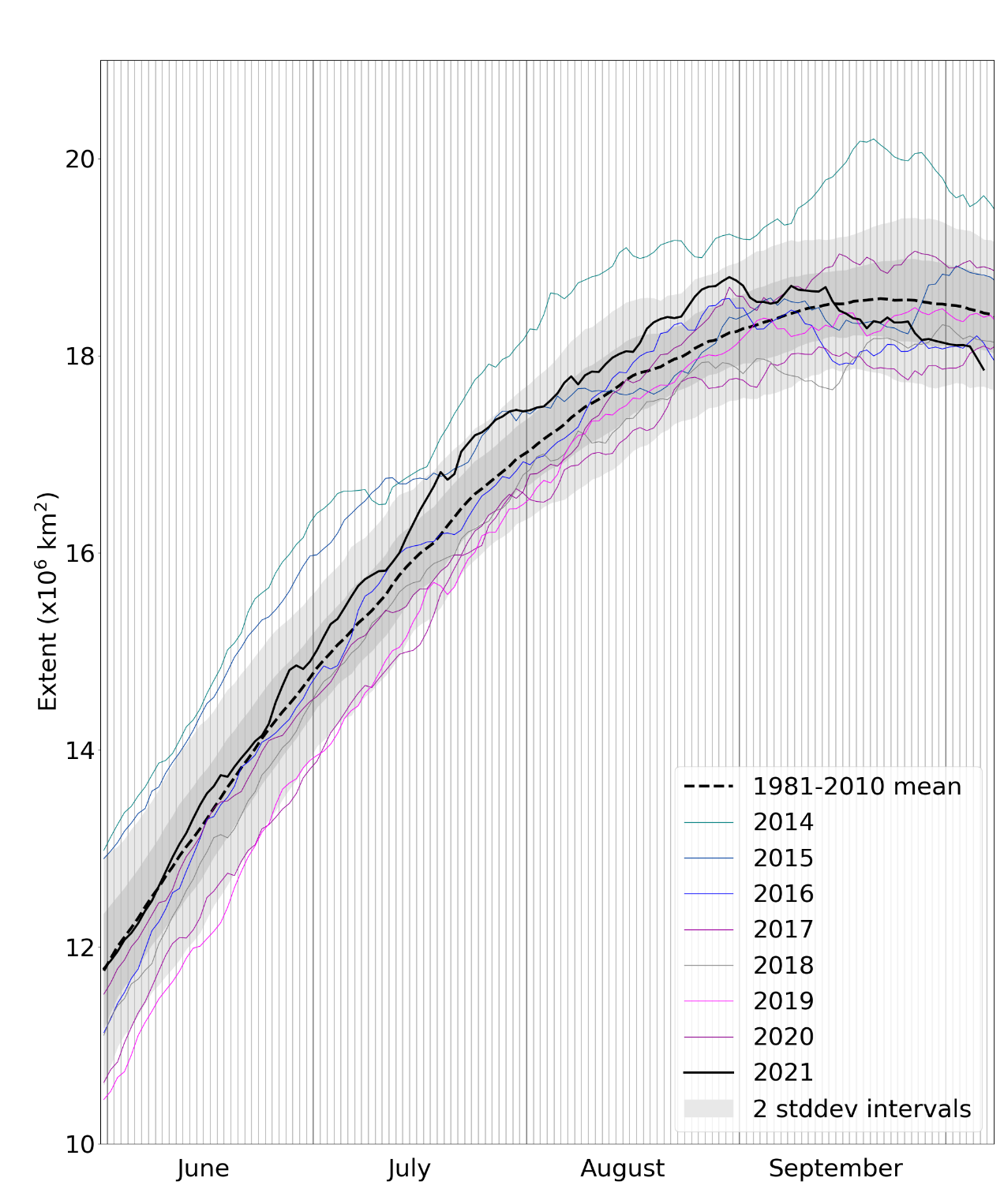 Figure 7. Antarctic sea ice extent for 2021 and other recent years, compared to the 1981-2010 average, with 1 and 2 standard deviation intervals indicated. Data are from NSIDC.

Antarctic sea ice has been at relatively high levels for most of the summer but fell to well-below average levels during September. On 10th October, extent was particularly low in the Bellingshausen and Weddell Seas, and in the eastern Indian Ocean sector, countered by an area of higher-than-average ice extent in the western Indian Ocean sector (Figure 8). 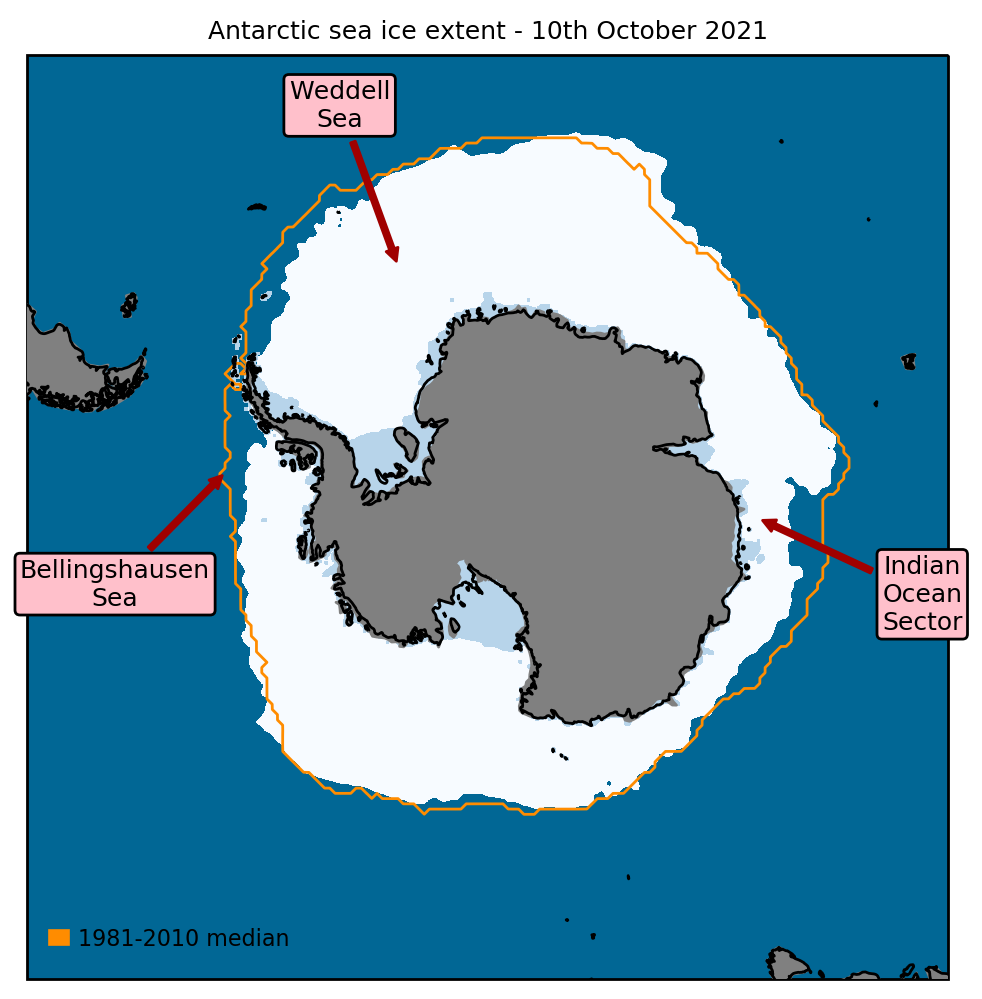 Figure 8. Antarctic sea ice coverage on 10th October 2021, with average September sea ice extent from 1981-2010 indicated in orange and regions referred to in the text labelled. Data are from EUMETSAT OSI-SAF.