Arctic sea ice extent on 11th July 2021 was 7.98 million sq km (Figure 1). This was the 2nd lowest extent recorded for this date in the era of satellite observations (since 1979). The lowest extent was the 7.85 million sq km recorded in 2020. Extent on 11th July 2021 was 1.95 million sq km below the 1981-2010 average. The near record-low extent follows a short period of very rapid ice loss, with 1.00 million sq km lost from 30th June – 4th July. This resulted in ice extent briefly becoming the lowest on record by a wide margin. However, since 4th July melting has slowed somewhat. 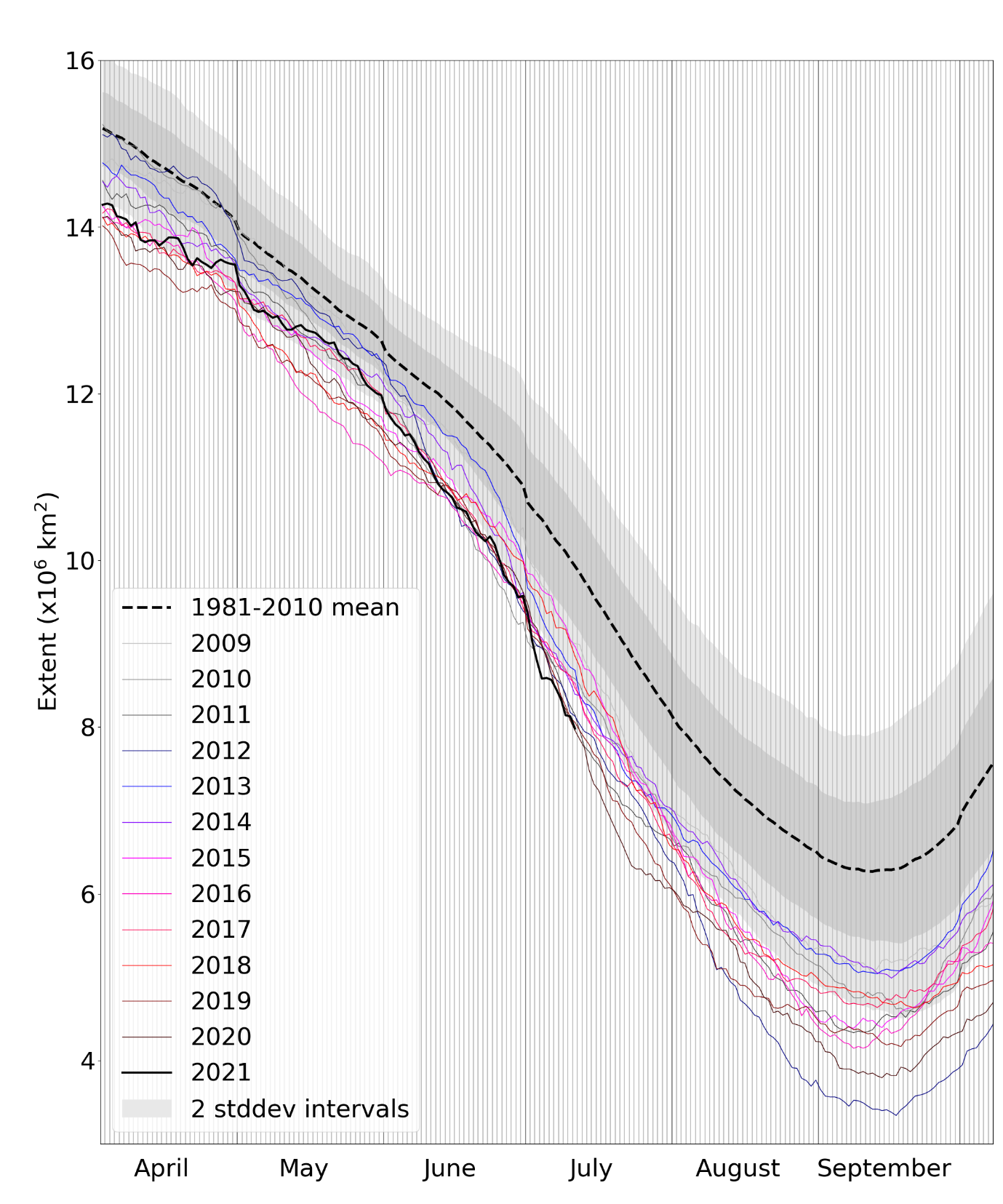 Figure 1. Daily Arctic sea ice extent for 2021, compared with recent years and the 1981-2010 average with ± 1 and 2 standard deviation intervals indicated by the shaded areas. Data are from the National Snow and Ice Data Center (NSIDC).

Extent was well below average in all seas north of Siberia (Kara, Laptev and East Siberian Seas) but was nearer average in the Beaufort and Chukchi Seas north of Alaska and Canada (Figure 2). 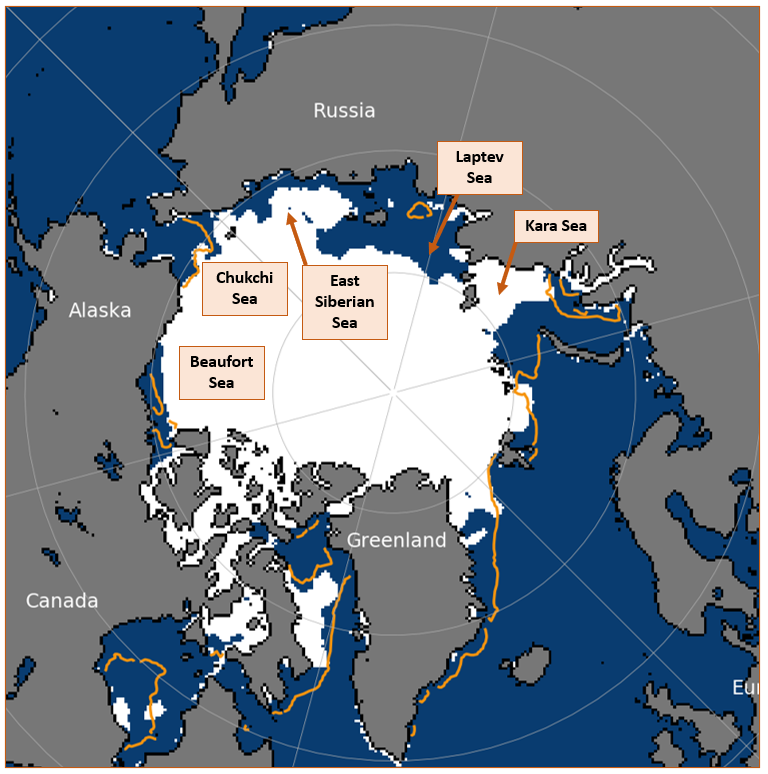 Figure 2. Arctic sea ice extent on 11th July 2021, with 1981-2010 average extent indicated in orange, and the regions referred to in the text labelled. Underlying map and data courtesy of NSIDC. 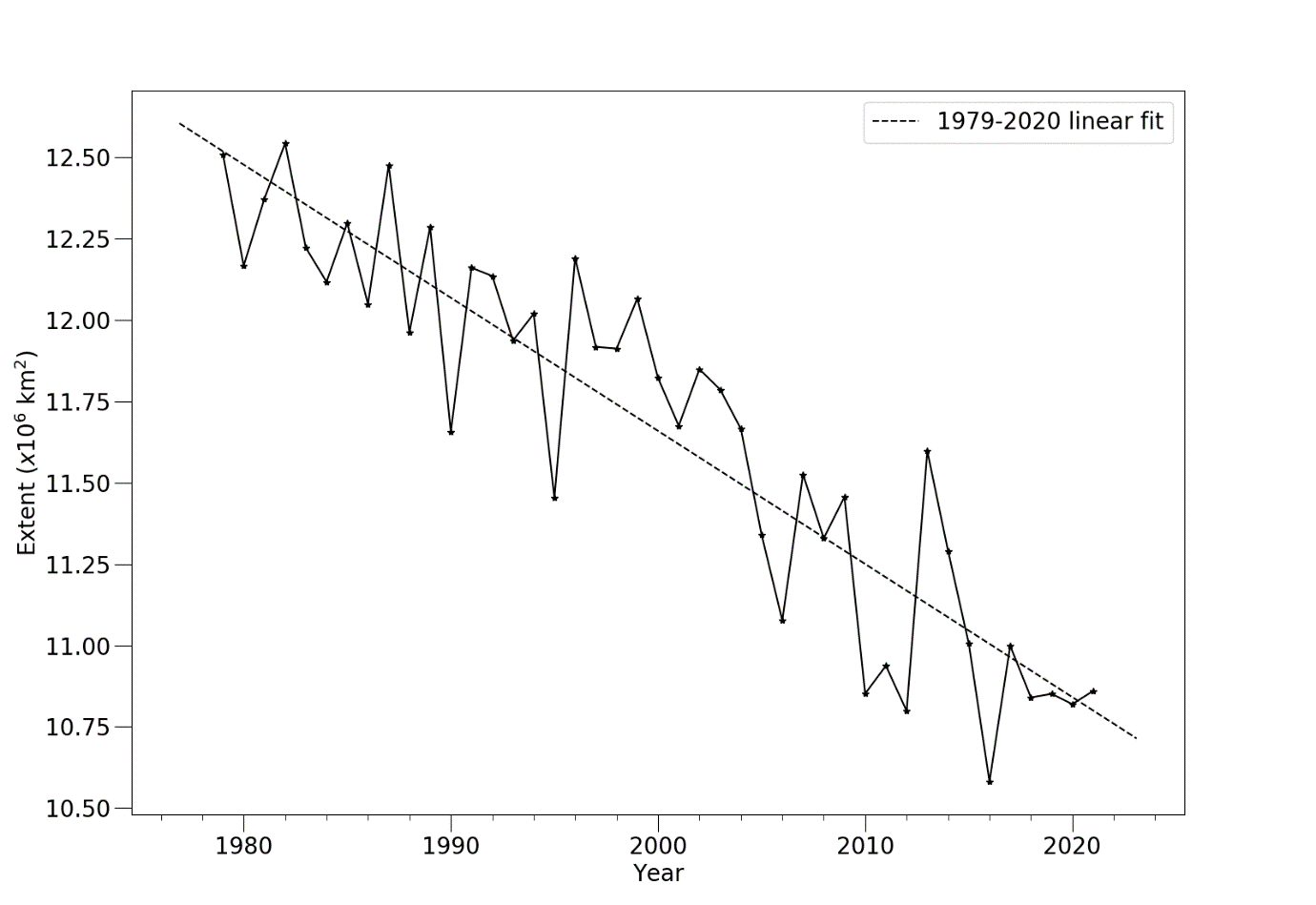 June was a persistently unsettled, stormy month over the Arctic Ocean (Figure 4a), but a ridge of high pressure over Eastern Siberia often caused warm southerly winds in the Laptev and East Siberian Seas. Temperatures ranged from near-average in the Beaufort and Kara Seas to over 3°C above average in the Laptev and East Siberian Seas (Figure 4b). The period 1st – 5th July saw yet another outbreak of warm air in this region, associated with further rapid melting of ice in these seas. This contributed to the exceptional Arctic-wide loss noted above. This was also part of a pattern of blocked weather in the Northern Hemisphere during late June and early July. A near-stationary jet stream displayed northward shifts, with associated heatwave conditions, over Eastern Siberia, Western North America and Eastern Europe / Western Russia. However only the East Siberian heatwave was directly implicated in the rapid sea ice loss in the Arctic Ocean.

The Sea Ice Outlook (SIO), coordinated by the Sea Ice Prediction Network (SIPN), comprises 38 predictions of 2021 September Arctic sea ice extent from scientific centres around the world. These range from 3.73 to 5.23 million sq km (equivalent to 2nd and 15th lowest respectively), with a median estimate of 4.37 million sq km and an interquartile range of 4.07 to 4.61 million sq km (Figure 5). None of the SIO predictions would represent a new record low extent. However, the uncertainty ranges of many estimates encompass a new record low.

These uncertainty intervals encompass September extents that range from 1st to 15th lowest, and 1st to 12th lowest, respectively. This, together with the wide range of SIO predictions, indicates that uncertainty remains very high at this point in the season. 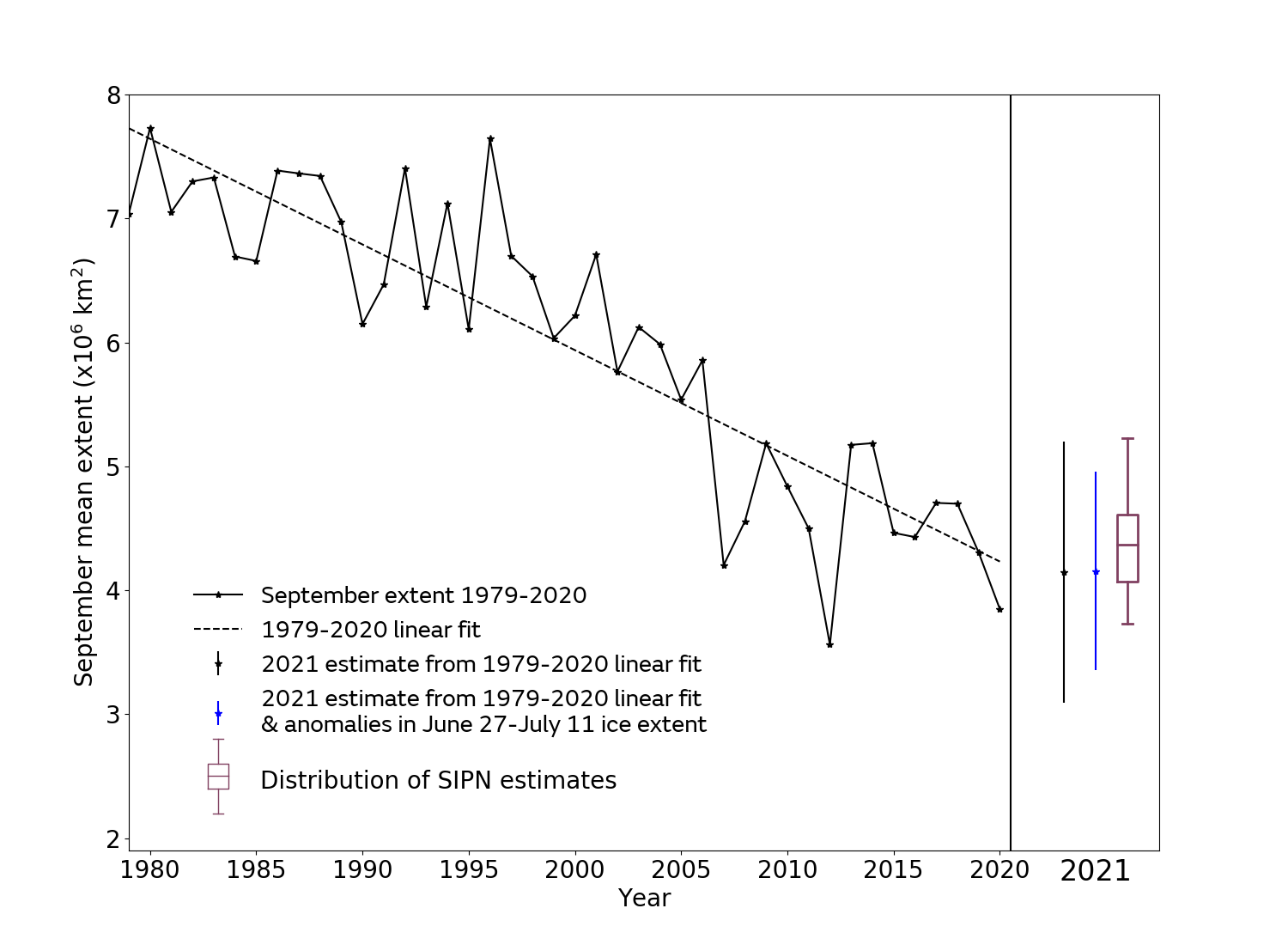 Figure 5. September median Arctic sea ice extent since satellite records began in 1979 from the HadISST1.2 dataset (Rayner et al., 2003), with SIPN Sea Ice Outlook and statistical predictions for September 2021. For the statistical predictions, error bars represent twice the standard deviation of September mean ice extent about the trend lines with respect to which the estimates are taken. The Sea Ice Outlook is shown as a boxplot indicating range, median and quartiles of the 38 predictions submitted.

Antarctic sea ice extent on 11th July 2021 was 15.82 million sq km (Figure 6). This was 0.25 million sq km above the 1981-2010 average, and the 13th highest extent recorded for this date in the satellite era. As usual there was regional variation in the anomaly; areas of higher-than average extent included the western Indian Ocean sector, the Ross Sea and the western Bellingshausen Sea (Figure 7), but extent was lower than average in the vicinity of the Antarctic Peninsula and in the Weddell Sea. 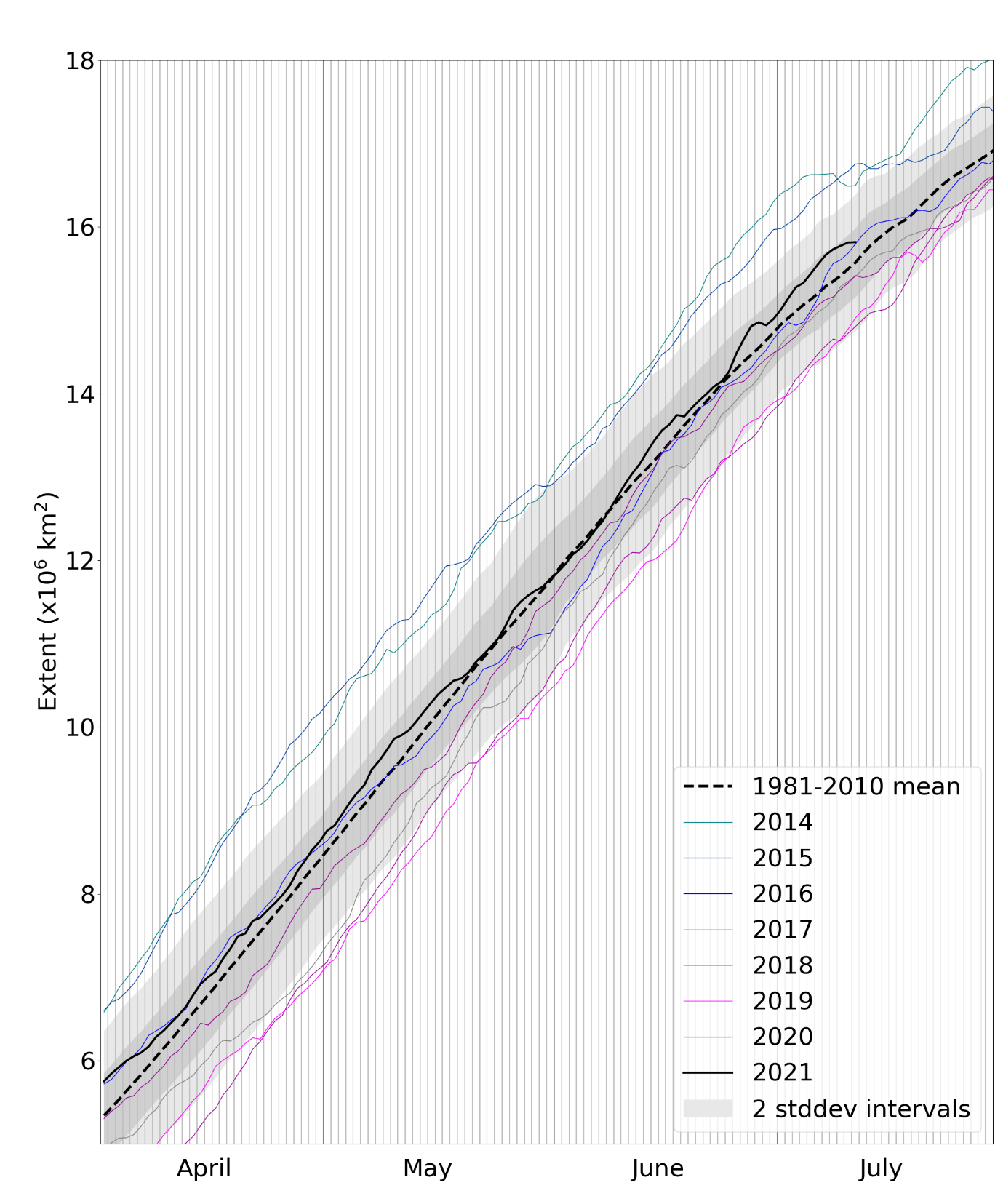 Figure 6. Daily Antarctic sea ice extent for 2021, compared with recent years and the 1981-2010 average, with ± 1 and 2 standard deviation intervals indicated by the shaded areas. Data are from NSIDC. 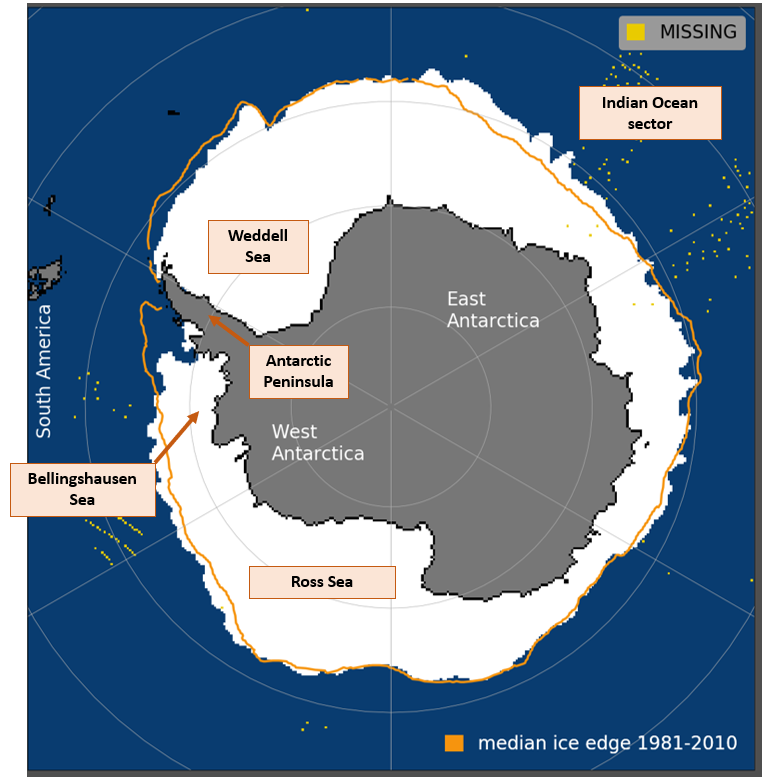 Figure 7. Antarctic sea ice extent on 11th July 2021, with 1981-2010 average extent indicated in orange, and regions referred to in the text labelled. Underlying map and data courtesy of NSIDC.