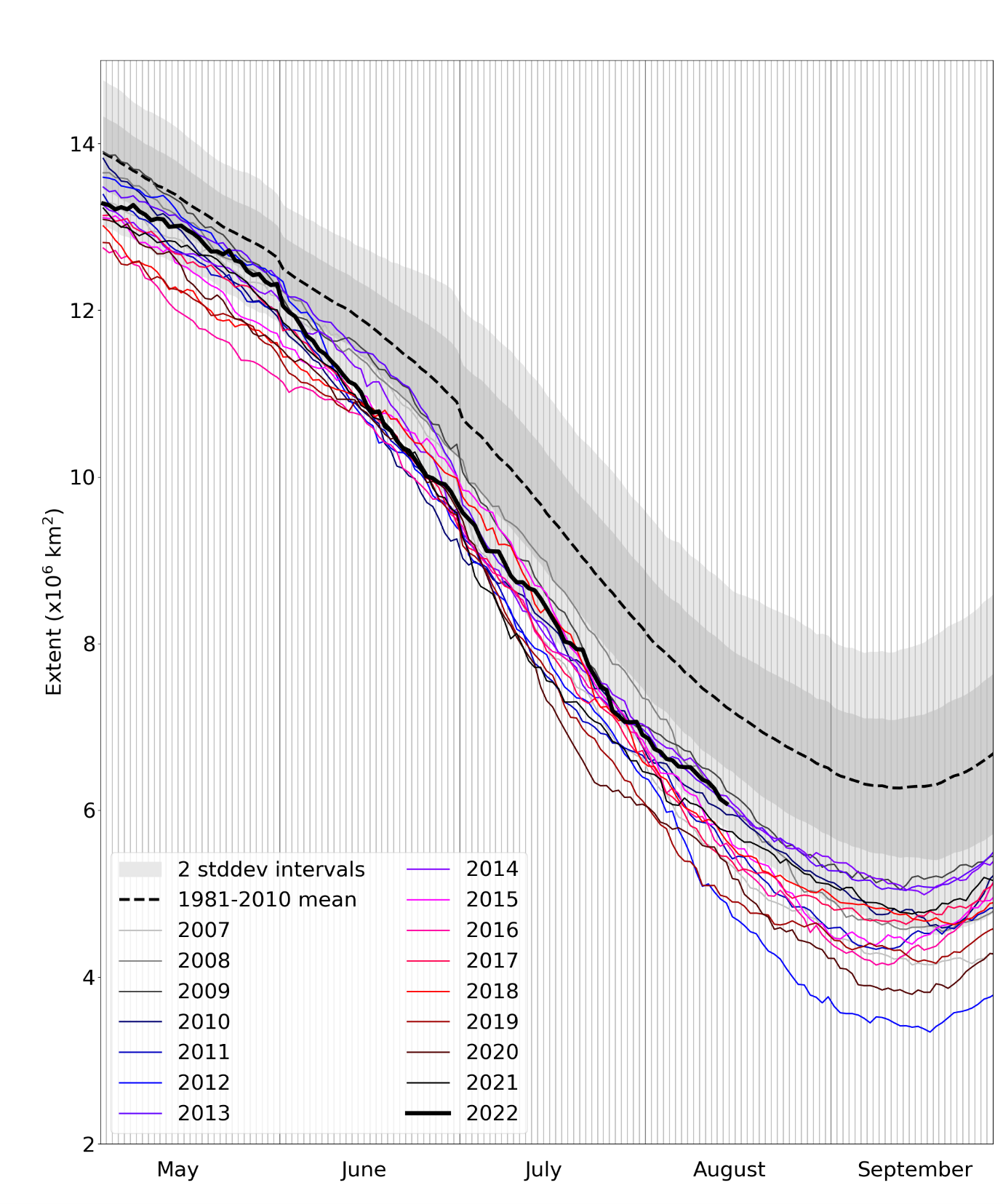 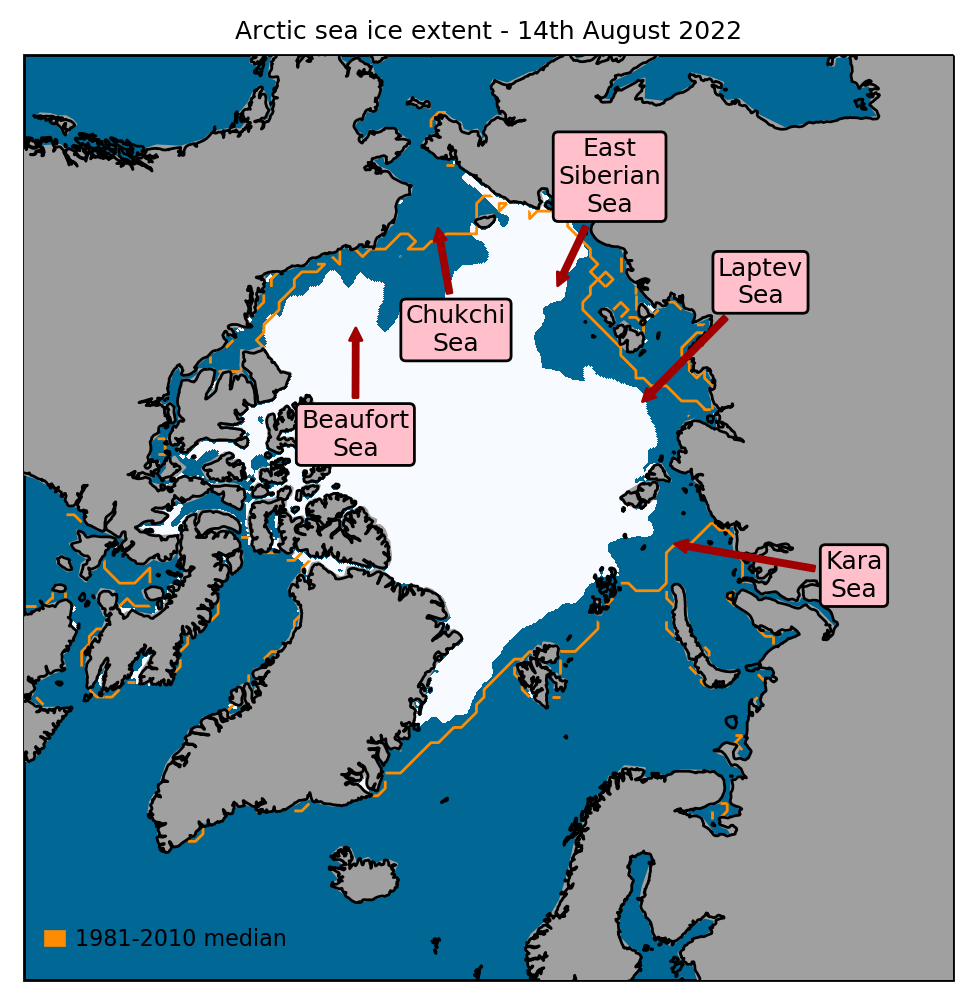 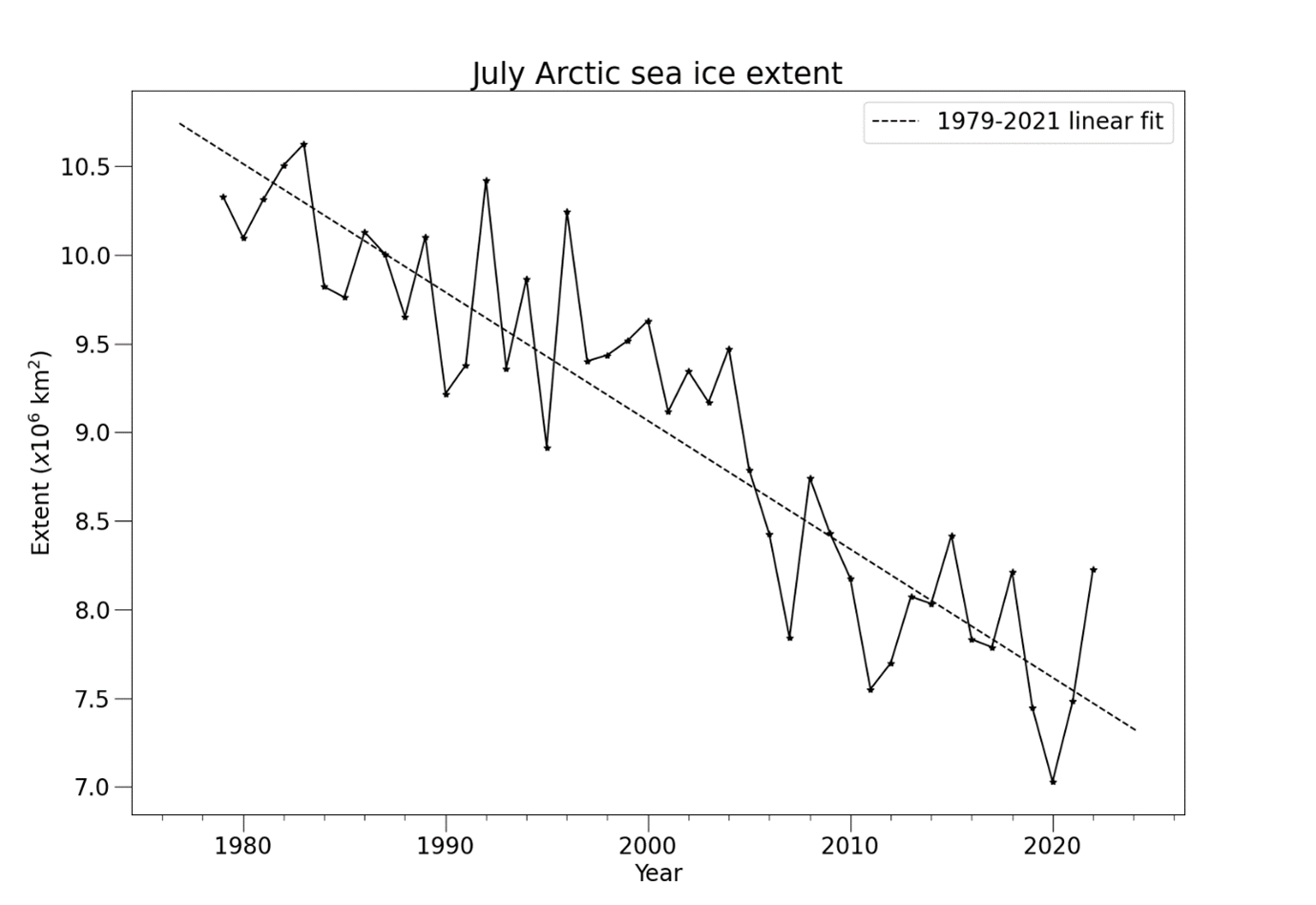 The first half of July was marked by the continuation of a stormy spell of weather in the central Arctic that began in mid-June (Figure 4a). With relatively little warm air from lower latitudes entering the Arctic, upper air temperatures were near or below-average throughout the whole Arctic Ocean except the Beaufort and Barents Seas (Figure 4b). Around mid-month another pronounced change took place as a ridge of high pressure built into the Arctic from Western Siberia, settling the weather down (Figure 4c). Upper air temperatures were then well above average throughout the Atlantic sector (Figure 4d), associated with southerly winds to the west of the high pressure. However, conditions were colder than average in the East Siberian Sea, which saw persistent northerlies throughout the second half of the month. The cold weather, and direct spreading of the ice by the winds, likely explains the near-average extent in this region. 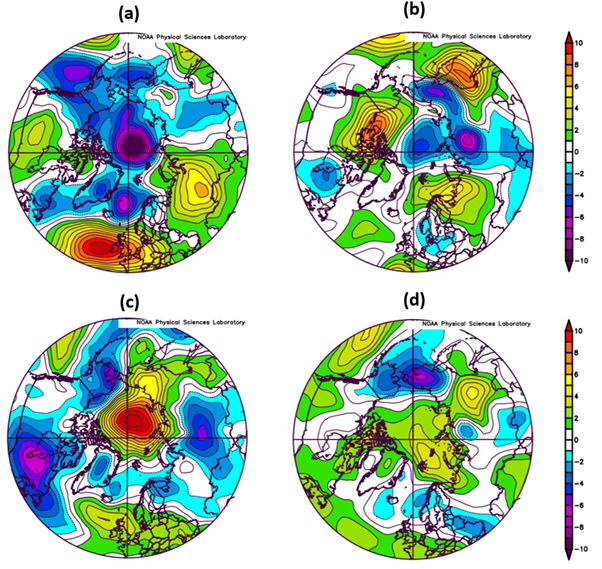 A new record low September average Arctic sea ice extent is now unlikely to occur this year. This would require, for the remainder of the summer, an average melt rate far in excess of the fastest rate observed over the satellite era since 1979. However, it is likely that 2022 will see another well below average September sea ice extent, between 3rd – 17th lowest.

Each year the Sea Ice Prediction Network (SIPN) compiles predictions of September Arctic sea ice extent from scientific centres around the world in a series of reports published throughout the summer (known as the Sea Ice Outlook, SIO). The July report comprises 30 predictions of 2022 September extent ranging from 3.96 to 5.26 million sq km (equivalent to 3rd and 16th lowest respectively), with a median estimate of 4.65 million sq km and an interquartile range of 4.49 to 4.76 million sq km (Figure 5, purple box-plot). None of the July SIO predictions would represent a new record low extent. 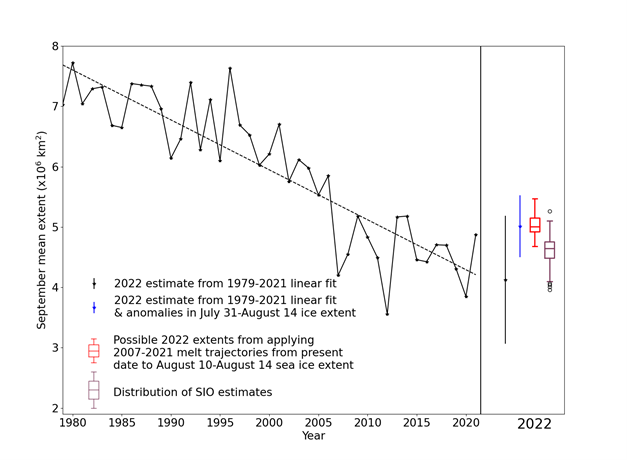 Figure 5. September median Arctic sea ice extent since satellite records began in 1979 from the HadISST1.2 dataset (Rayner et al., 2003), with SIPN Sea Ice Outlook and statistical predictions for September 2022. For the statistical predictions derived from linear fit, error bars represent twice the standard deviation of September mean ice extent about the trend lines with respect to which the estimates are taken. The range of predictions derived from past melting trajectories is shown as a red boxplot indicating range, median and quartiles of estimates derived from each trajectory in the 2007-2021 period. The Sea Ice Outlook is shown as a purple boxplot indicating range, median and quartiles of the 30 predictions submitted. 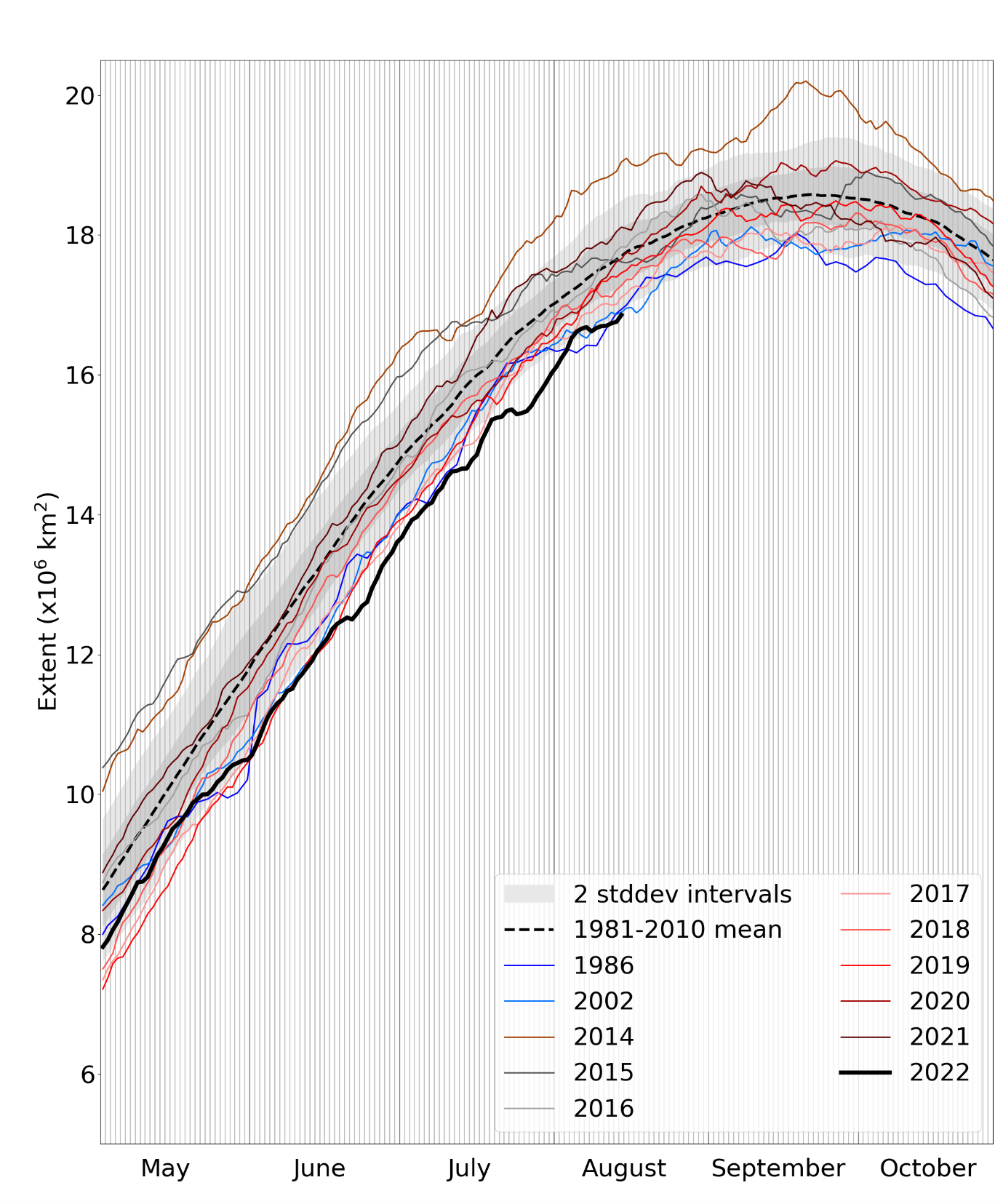 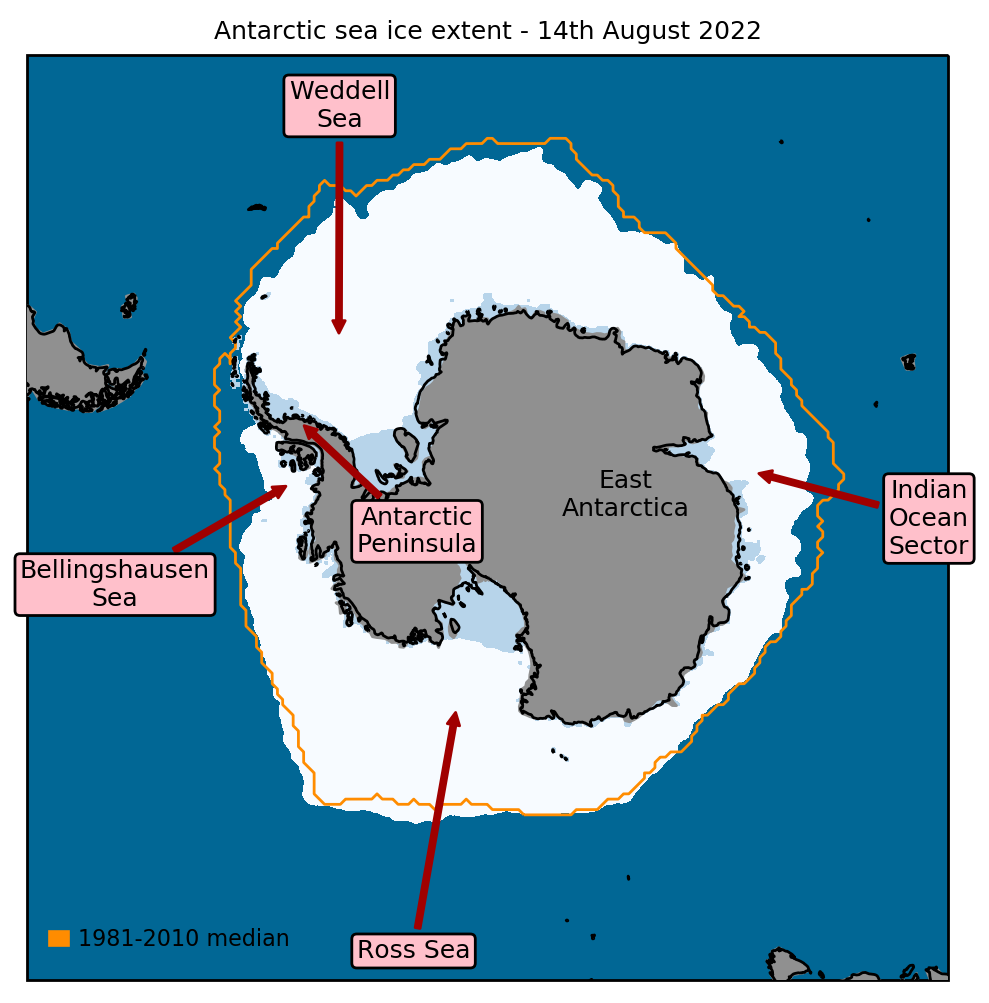