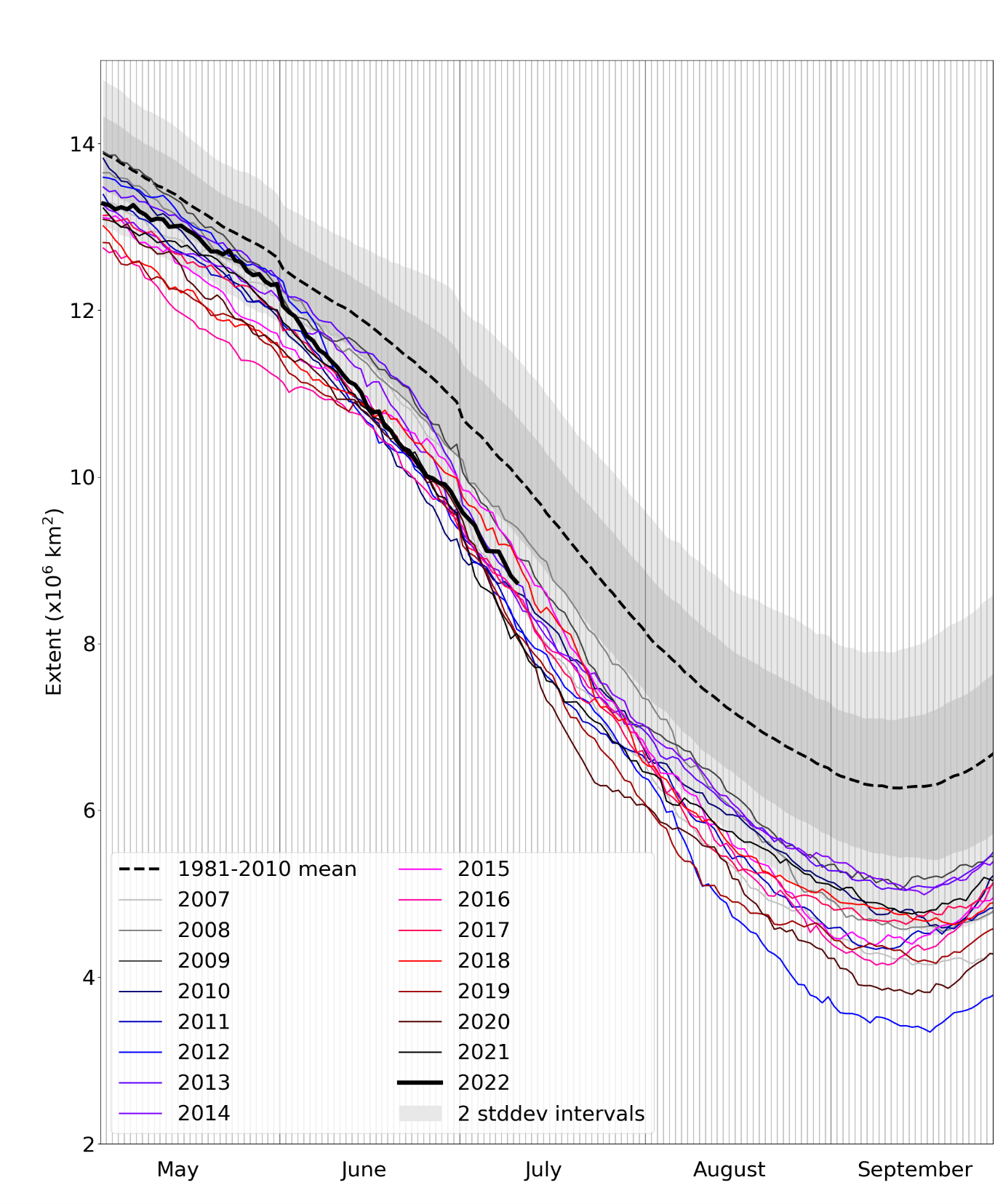 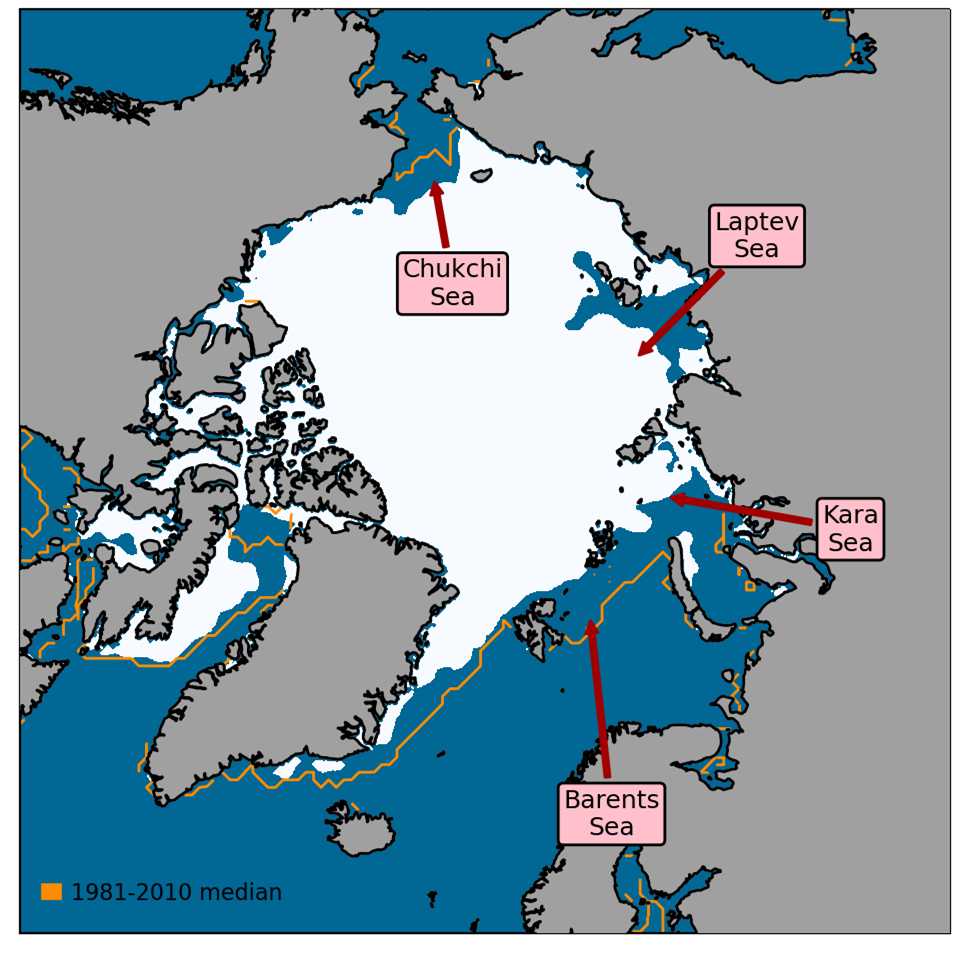 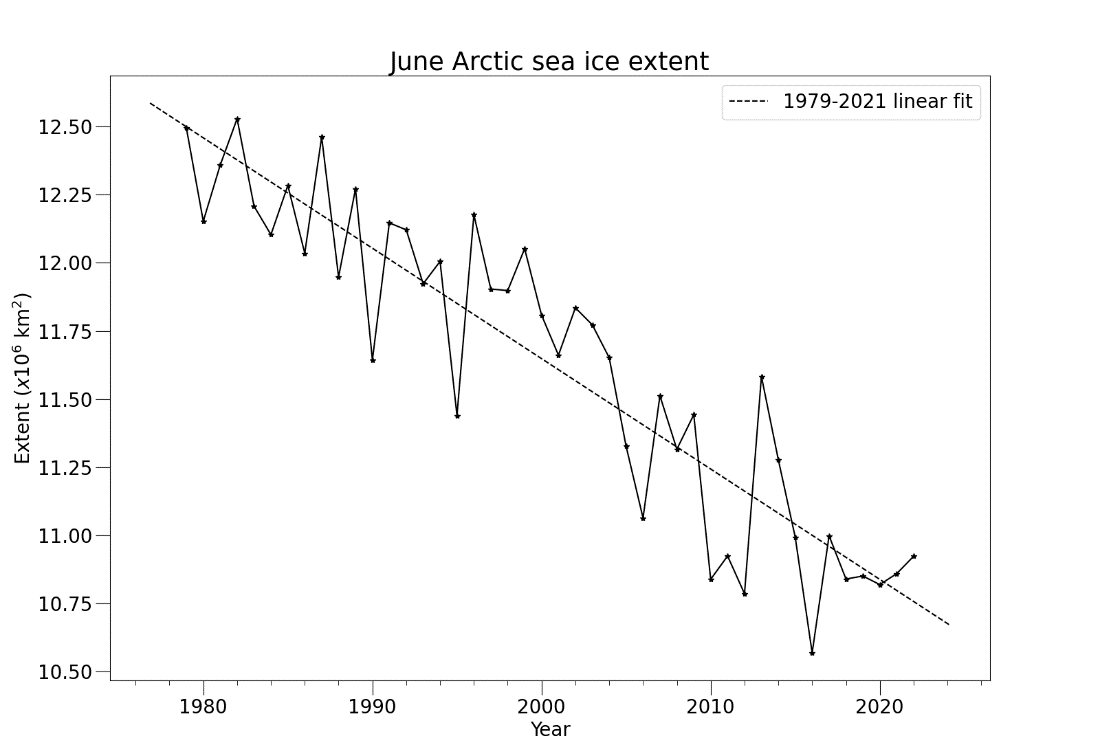 Arctic weather during June saw strong contrasts between the first and second half of the month (Figure 4). The first half of June was dominated by a powerful high-pressure system, producing largely settled weather, across the Central Arctic and the Siberian coastal seas, with storms largely restricted to the Atlantic sector and the Beaufort Sea north of Alaska. This produced southerly winds, and higher than average temperatures, in the Siberian seas, but northerly winds, and colder than average temperatures in the Beaufort Sea. Consistent with this, ice loss during the first half of the month was concentrated in the seas north of Siberia.

In the second half of June, conditions became much stormier in the Central Arctic and the coastal Siberian seas, while a high pressure ridge built over the North American side of the Arctic. This effectively switched the temperature pattern, with the Beaufort Sea seeing warmer than average weather and development of melt ponds as seen in satellite images, while the Siberian coastal seas saw cooler temperatures and a slow-down in ice loss. 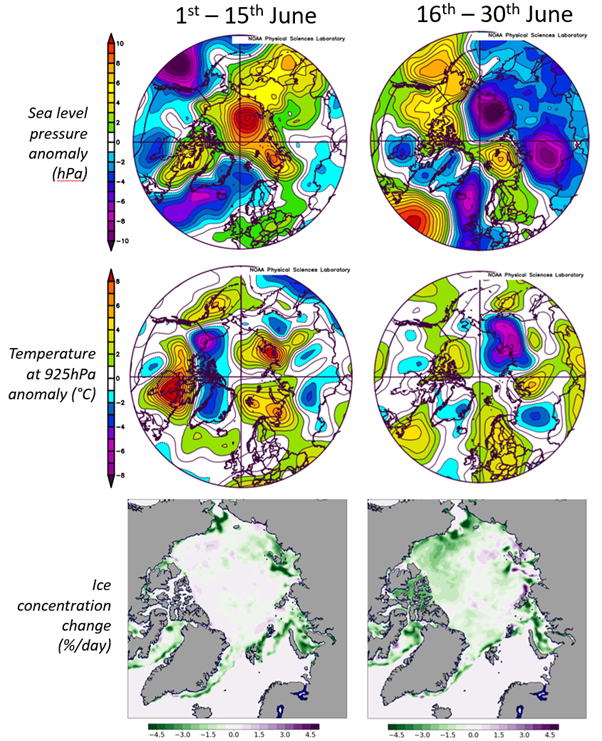 There is currently no heightened indication that 2022 will see a new record low Arctic sea ice extent at the seasonal minimum in September. However, uncertainty is considerable at this stage of the melt season and so a new record low remains possible. Indications are that this year’s September extent will nevertheless be well below the 1981-2010 average, likely among the 16 lowest recorded.

Each year, scientific centres around the world submit predictions of September Arctic sea ice extent to the Sea Ice Outlook (SIO), a series of reports published in June, July and August by the Sea Ice Prediction Network (SIPN). The first report of the summer was published on 27th June and comprises 37 predictions of September sea ice extent with a median of 4.57 million sq km, ranging from 3.41 to 5.20 million sq km (Figure 5). Only the lowest two predictions would represent new record lows for September sea ice extent, although for plenty of predictions the uncertainty ranges allow for the possibility of a new record low.

To supplement the SIO predictions, we use three different statistical methods to illustrate the range of September average sea ice extents that are likely given current data, also illustrated in Figure 5: 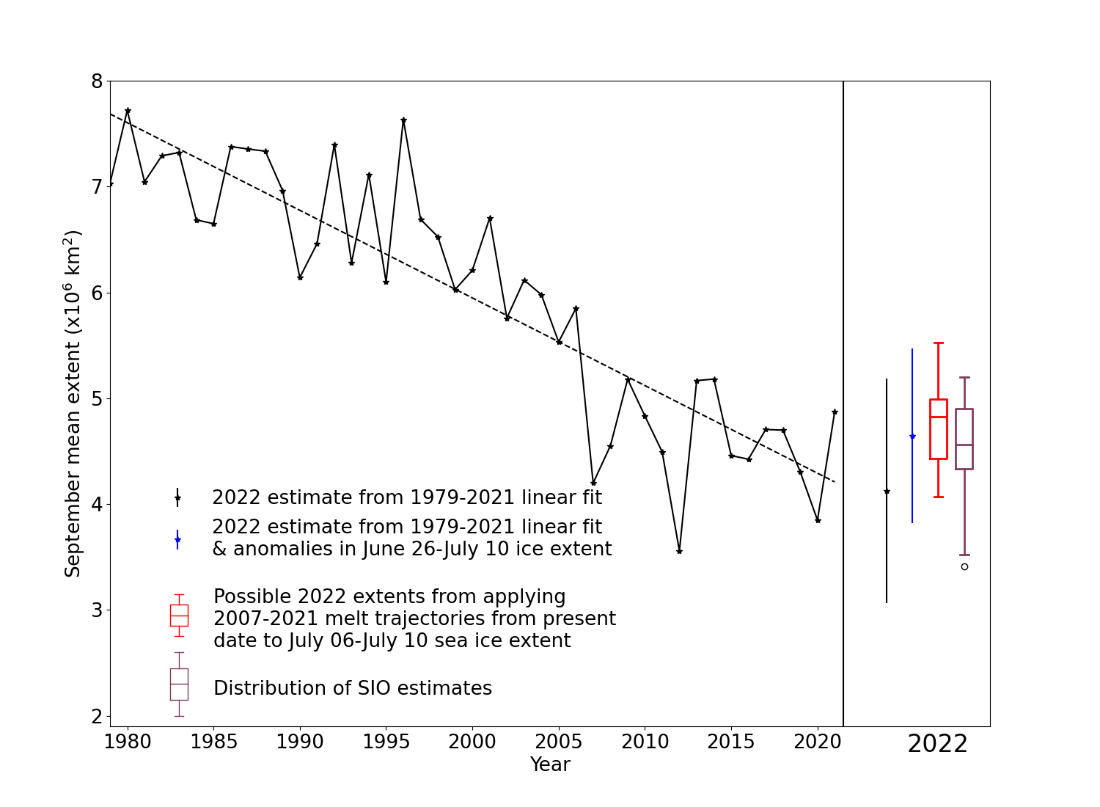 Figure 5. September Arctic sea ice extent since satellite records began in 1979 from the HadISST1.2 dataset (Rayner et al., 2003), with SIPN Sea Ice Outlook and statistical predictions for September 2022. For the statistical predictions derived from linear fit, error bars represent twice the standard deviation of September mean ice extent about the trend lines with respect to which the estimates are taken. The range of predictions derived from past melting trajectories is shown as a red boxplot indicating range, median and quartiles of estimates derived from each trajectory in the 2007-2021 period. The Sea Ice Outlook is shown as a purple boxplot indicating range, median and quartiles of the 37 predictions submitted. 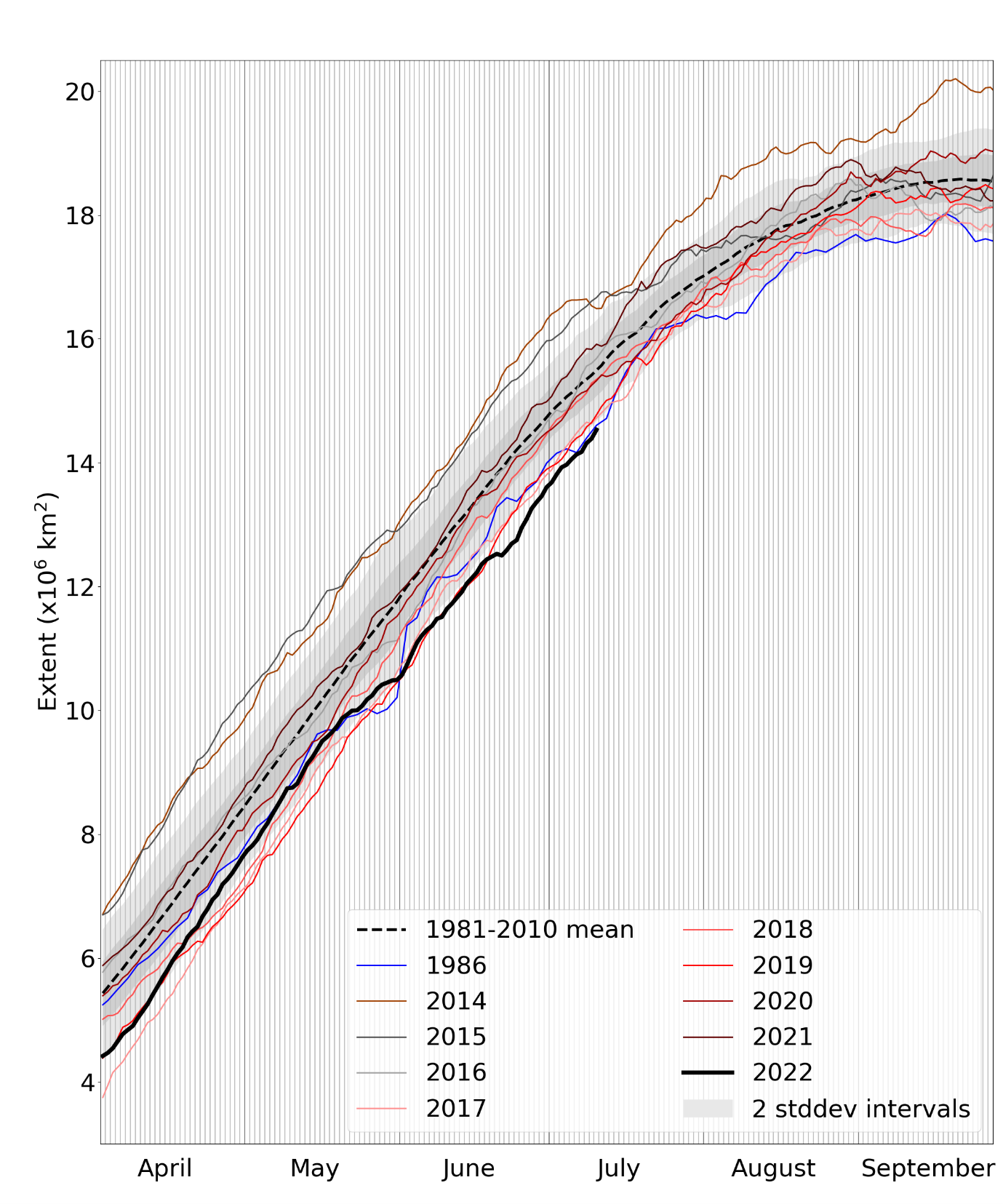 Figure 6. Daily Antarctic sea ice extent for 2022, compared with recent years and the 1981-2010 average, with ± 1 and 2 standard deviation intervals indicated by the shaded areas. Data are from NSIDC. 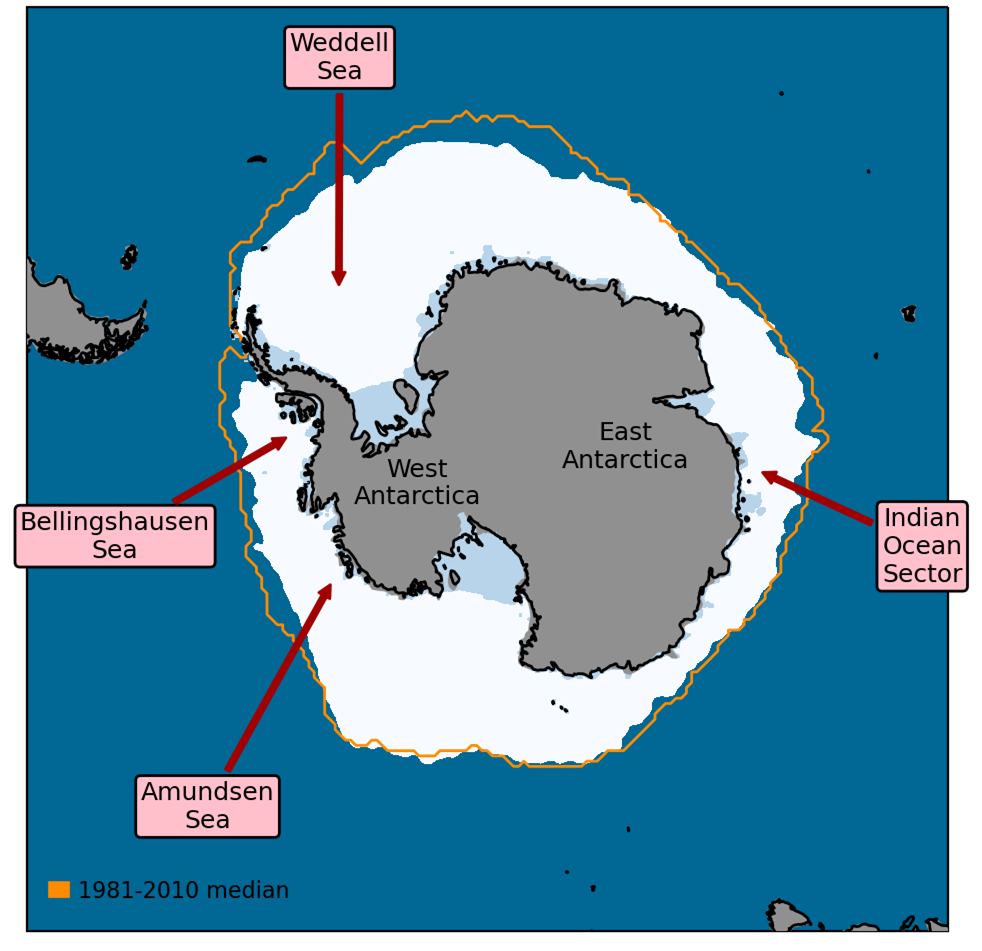