An overview of El Niño, La Niña and the Southern Oscillation.

Such events are a consequence of strong and extensive interactions between the ocean and atmosphere. They are associated with widespread changes in the climate system that last several months, and can lead to significant socio-economic impacts affecting infrastructure, agriculture, health and energy sectors for example.

These episodes alternate in an irregular inter-annual cycle called the ENSO cycle. 'ENSO' stands for 'El Niño Southern Oscillation', where 'Southern Oscillation' is the term for atmospheric pressure changes between the east and west tropical Pacific that accompany both El Niño and La Niña episodes in the ocean. The name 'ENSO' is a reminder that close interaction between the atmosphere and ocean is an essential part of the process. While the global climate system contains many processes, ENSO is by far the dominant feature of climate variability on inter-annual timescales. 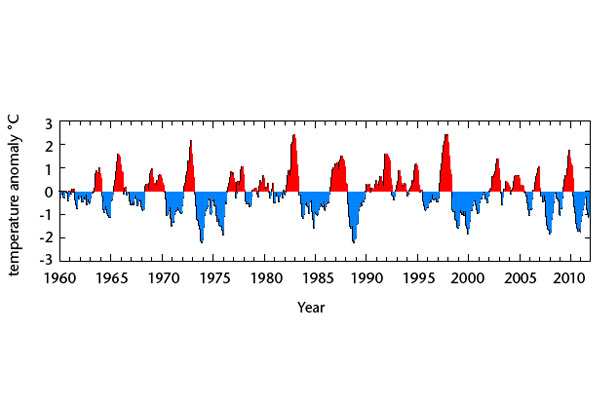 The ENSO cycle is illustrated in the figure by a time-series of the monthly sea surface temperature anomalies in a region of the central equatorial Pacific. This 'Niño3.4' region (5°S-5°N,120°W-170°W) is one of several used to monitor changes in the tropical Pacific. Definitions vary, but as a guide the El Niño and La Niña episodes occur when anomalies in this region are larger than about 0.5 °C in magnitude for several months. While a typical episode might last for three or four seasons, peaking in size in boreal winter, the time-series demonstrates that events are not entirely regular and have various sizes and durations. The climate system does not always simply alternate between El Niño and La Niña: the same type of event can occur successively or be sustained over several years.

The ENSO cycle is a natural climate phenomenon; proxy evidence (e.g. coral growth rate measurements) indicates that ENSO has been active for thousands of years.

The cycle is the consequence of slow feedbacks in the ocean-atmosphere system acting alongside the strong air-sea interaction processes in the tropics that allow the growth of small disturbances to the large-scale ocean state.

Normally the equatorial Pacific Ocean has a pool of relatively warm water in the upper ocean in the west and a shallower layer of relatively cool water in the east, maintained by and in balance with easterly surface winds. The well-mixed upper ocean layer (a few tens of metres deep) lies above a thin 'thermocline' layer, with cold water below.

An El Niño event can start in several ways, usually with the sea surface temperature raised slightly in the central/east Pacific. This may be, for example, through the action of 'westerly windbursts' (short-lived storm-like events in the Western Pacific) that disturb the 'balance' maintained by easterly winds, or through slow evolution of the ocean thermocline as a consequence of a previous event. The increased sea surface temperature influences the atmospheric winds, which in turn influence the upper ocean and the thermocline such that the sea surface temperature is increased further - a positive feedback. When conditions are favourable, this feedback generates an El Niño event.

A La Niña event can arise similarly. El Niño and La Niña events are self-limiting, evolving in such a way that the equatorial sea surface temperatures gradually return to normal and the event ends after several months. Often the system overshoots, to start the opposite phase of the cycle rather than just return to neutral conditions.

Impacts on global weather and climate

During ENSO events the changes in sea surface temperature cause (and are influenced by) changes in atmospheric circulation (i.e. wind and pressure patterns) and in temperature and rainfall. Through atmospheric dynamics, these atmospheric changes extend well beyond the tropical Pacific region. The Atlantic and Indian oceans are also affected, which in turn extends and prolongs the impacts. The effects vary considerably with season and location.

By analysing conditions experienced during many past events, statistics of the impacts can be produced. Although the typical historical impacts of El Niño and La Niña can be calculated, individual events differ in details such as timing and magnitude. Moreover they constitute just one (albeit very important) influence on climate variability. For this reason the typical response to El Niño or La Niña should not be seen as inevitable. Rather, El Niño and La Niña events should be regarded as shifting the odds in favour of the typical response which may, for example, increase the risk of heavy rainfall and consequent damage in a particular region/season of interest.

An important feature of the ENSO cycle is that its evolution is predictable several months in advance, so the impacts can be anticipated and decisions can be made to mitigate adverse effects or take advantage of favourable effects. Predictions of the effects of an ENSO event that is initiating or in progress are best based on forecasts that take into account all known details of the recent and present state of the climate system.