Outlook for global temperature in the coming years

Decadal forecasts are designed to predict fluctuations in the climate system over the next few years. They take into account natural variability as well as human influences. This is achieved by initialising climate models with observations of the current climate state, in addition to specifying changes in radiative forcing due to greenhouse gases, aerosols (both volcanic and man-made), and solar variability. Further details can be found in a Met Office Decadal Forecasting - What is it and what does it tell us? .

The latest Met Office decadal forecast presented here was started from the observed sea surface temperature pattern shown in Figure 1, along with similar observations of temperature and salinity below the ocean surface, and atmospheric winds, temperatures and surface pressure. The temperatures in Figure 1 show a weak El Niño pattern in the tropical Pacific, relatively cool conditions in the Southern Ocean, warm conditions over much of the North Atlantic but with some cooling in the mid-latitude North Atlantic. However the tropical north-west Pacific remains warmer than normal and this has acted to stifle the atmospheric feedbacks (the Southern Oscillation) that are necessary to amplify El Niño. 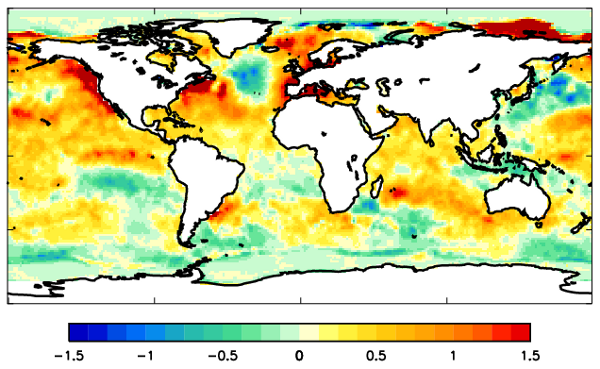 Figure 1:Observed sea surface temperature differences (°C) relative to 1981-2010 for October 2014. These, together with similar observations below the ocean surface, have been used as starting conditions for the decadal forecast.

The maps in Figure 2 show the difference between the predicted geographical distribution of temperatures over the period November 2014-October 2019 and 1981-2010 averages. Diagram A is the most likely forecast outcome. Diagrams B and C indicate the range of forecast temperatures, such that we expect only a 10% chance of temperatures at particular locations being less than those in B, and only a 10% chance of temperatures higher than in C. Note that these ranges are for each individual location. The chances of these limits being met everywhere are very small, so the complete patterns shown in diagrams B and C are very unlikely to be realised. 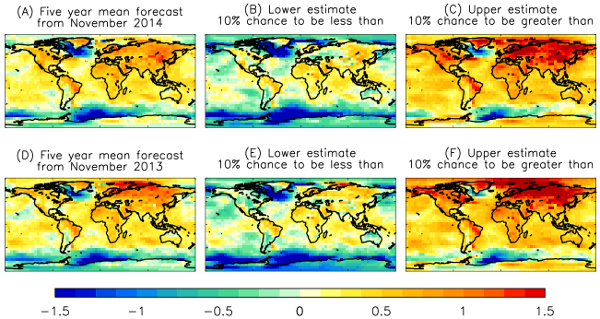 Figure 2:Forecast maps of surface temperature differences (°C) relative to 1981-2010 for the 5-year period November 2014 to October 2019 (A, B, C). The forecast consists of 10 ensemble members starting from November 2014. The most likely forecast outcome (A) is the ensemble mean. The probable range is diagnosed from the ensemble spread, and shown as the lower (B) and upper (C) limits for each 5° grid box, such that there is a 10% chance of the observations being cooler than B, and a 10% chance of the observations being warmer than C. Note that the actual anomaly patterns in B and C are unlikely to occur since extreme fluctuations would not be expected at all locations simultaneously. Lower panels (D, E, F) show the equivalent forecasts issued in January 2014 for the period November 2013 to October 2018 relative to 1981-2010.

Spatial patterns suggest enhanced warming over land and at high northern latitudes. There is some indication of continued cool conditions in the Southern Ocean, and of a developing cooling in the North Atlantic sub-polar gyre. Uncertainties in the forecast are considerable. For the period 2015-2019 most regions are expected to be warmer than the average of 1981 to 2010, but regional cooling is possible over much of the Pacific, North Atlantic and Southern Ocean, and over some land regions. The updated forecast (Figure 2 A-C) is very similar to the forecast issued a year ago (Figure 2 D-F). This is expected since four of the five years of the forecast period are included in both forecasts. Notably, the latest forecast suggests continued cooling in the North Atlantic sub-polar gyre. 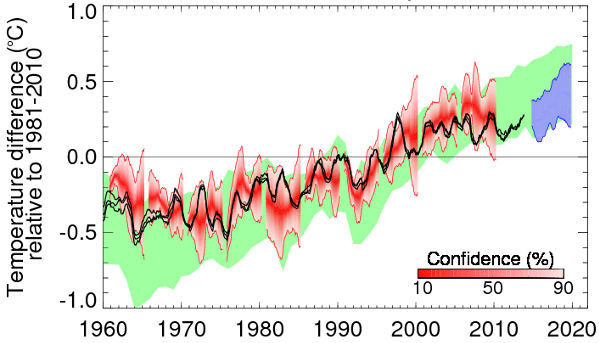 Figure 3:Observed (black, from Hadley Centre, GISS and NCDC) and predicted (blue) global average annual surface temperature difference relative to 1981-2010. Previous predictions starting from November 1960, 1965,... 2005 are shown in red, and 22 model simulations from the Coupled Model Intercomparison Project phase 5 (CMIP5), that have not been initialised with observations, are shown in green. In all cases, the shading represents the probable range, such that the observations are expected to lie within the shading 90% of the time. The most recent forecast (blue) starts from November 2014. All data are rolling 12-month mean values. The gap between the black curves and blue shading arises because the last observed value represents the period November 2013 to October 2014 whereas the first forecast period is November 2014 to October 2015.

The forecast is for continued global warming largely driven by continued high levels of greenhouse gases. However, the forecast initially remains towards the lower end of the range simulated by CMIP5 models that have not been initialised with observations (green shading), consistent with the recent slowdown in surface temperature warming. Changes in the exchange of heat between the upper and deep ocean appear to have caused at least part of the slowdown in surface warming: observations suggest that the Pacific Ocean may play a key role but so may the Southern Ocean and the North Atlantic. For further discussion on the surface warming slowdown see the Met Office The recent pause in warming and the recent update discussing the latest global mean temperatures.

Retrospective forecasts have been made from numerous dates in the past. Some of these are shown in Figure 3 (red shading from 1960, 1965, ..., 2005). Generally, the forecasts predict rises in temperatures similar to those observed (black curves). Many facets of the variability, such as the warming caused by the large 1997-1998 El Niño and the cooling caused by the 2008 La Niña, are largely within the range of the predictions (red shading).

The maps in Figure 4 compare observed (A) and forecast (B) surface temperatures (°C) for November 2009 to October 2014 relative to the 1981-2010 long-term average. Forecasts were made starting from November 2009 using Met Office decadal prediction system: DePreSys. Stippling shows regions where the observed temperatures do not lie within the 5-95% range of the forecast.

Figure 4:Observed (A) and forecast (B) maps of surface temperature differences (°C) relative to 1981-2010 for the 5-year period November 2009 to October 2014. Forecasts consist of 4 ensemble members starting from November 2009. The stippling shows where the observations lie outside the 5-95% confidence interval of the forecast ensemble.

The decadal forecast system predicted enhanced warming over high northern latitudes, and cooling in the Southern Ocean and North Atlantic sub-polar gyre. These are in broad agreement with the observations, although there are differences in the precise magnitude and location of anomalies. However, the forecast did not predict the cooling in the eastern tropical Pacific associated with the negative phase of the Pacific Decadal Oscillation (PDO), and the cooling over parts of China associated with a negative Arctic Oscillation (AO). This is consistent with the fact that decadal prediction systems are not yet capable of predicting the PDO or the AO for the coming five years.