What is ‘climate sensitivity’?

How sensitive our climate is to increases in CO2? Hence the term – ‘climate sensitivity’.

Over the past ~250 years human activity (burning fossil fuels and change of land use) has caused a rise in atmospheric CO2 to levels that are unprecedented in at least 800,000 years. Our atmosphere now contains about 45% more CO2 than it did before the Industrial Revolution, and global temperature has warmed by about 1°C.

The relentless rise of carbon dioxide 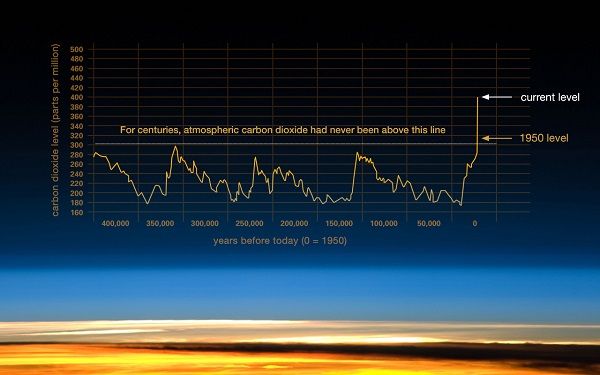 The key question that remains is exactly how much warming can we expect (both in the near-term and the long-term) for a given increase in carbon dioxide? Essentially we are asking how sensitive our climate is to increases in CO2, hence the term – ‘climate sensitivity’.

If we know what the climate sensitivity is, this will help us estimate how much CO2 we can emit and still stay below 2°C of warming – as per the Paris Agreement.

How is climate sensitivity defined?

Climate sensitivity is typically defined as the global temperature rise following a doubling of CO2 concentration in the atmosphere compared to pre-industrial levels. Pre-industrial CO2 was about 260 parts per million (ppm), so a doubling would be at roughly 520 ppm. Current levels of atmospheric CO2 have now exceeded 400 ppm, with the 520 ppm threshold expected in the next 50-100 years depending on future greenhouse gas emissions.

There are several ways of defining climate sensitivity, depending on the timescales of interest. Two of those are:

Equilibrium Climate Sensitivity (ECS): The climate system will continue to warm for some time after the TCR point, largely as the oceans are very slow to respond. Therefore we can also consider the temperature increase that would eventually occur (after hundreds or even thousands of years) when the climate system fully adjusts to a sustained doubling of CO2 – this is called the Equilibrium Climate Sensitivity. The long timescales involved here mean ECS is arguably a less relevant measure for policy decisions around climate change.

How can we estimate climate sensitivity?

Climate sensitivity cannot be directly measured in the real world. Instead it must be estimated and there are three main lines of evidence that can be used to do this:

All of the above methods of estimating climate sensitivity require at least some form of simple climate model and involve making a number of assumptions. They each have further pros and cons.

The historical climate record is not long enough to represent some of the very slow interactions that happen between the ocean and atmosphere. Also, the observations used don’t cover the whole planet – which may mean they don’t fully capture warming trends.

Climate models cannot fully simulate small-scale processes in the climate system, such as those related to clouds – which are thought to be important for climate sensitivity.

Paleoclimate records can reveal information about long-term responses to a changing climate which can either slow or accelerate warming (known as feedbacks). However, different feedback processes are dominant on very long timescales (many thousands of years and beyond) compared to centennial timescales. This means paleo sensitivity estimates may not be directly comparable to looking at what climate sensitivity may be over the next 100 years.

Research also suggests climate sensitivity may not be constant – so understanding what it was in the past may not necessarily tell you exactly what it will be in the future.

As there is no ‘perfect’ way of estimating climate sensitivity, it remains a hotly debated area of science and there remains a wide range of estimates of what the ECS and TCR could be.

What is the current best estimate for climate sensitivity?

Research on this area continues to develop all the time and we can expect further assessments of the evidence in the coming years.