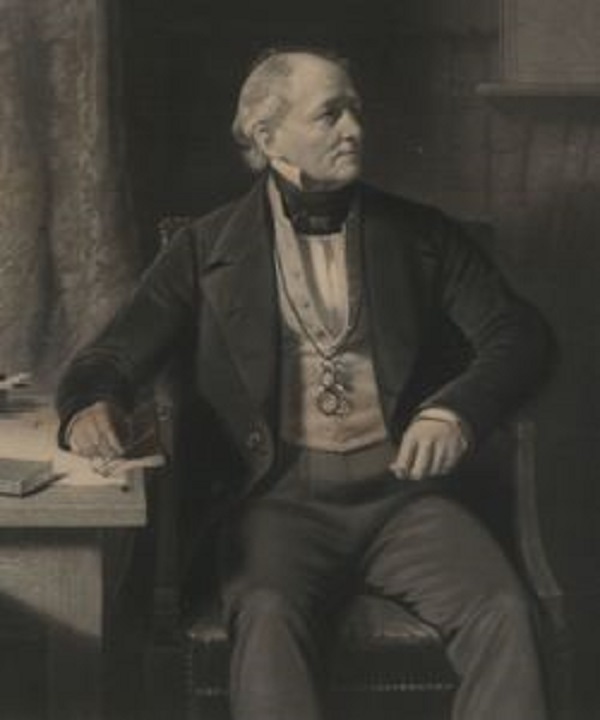 Francis Beaufort was born in Ireland in 1774. He was the younger son of Daniel Augustus Beaufort, a protestant clergyman from Navan, County Meath, Ireland and Mary Waller the co-heiress of Allenstown House. Francis grew up in Wales and Ireland until he was 14 after which he left school and went to sea first with the British East India Company and then with the Royal Navy. Francis continued to educate himself and in later life was able to associate as an equal with some of the greatest scientists and applied mathematicians of his day including John Herschel and Charles Babbage.

Francis had always been aware of the value of accurate charts. His father had created and published a new map of Ireland in 1792 and at 15 he himself was shipwrecked due to a faulty chart. Wherever possible he dedicated his time to surveying and publishing new charts and it was through this shared interest that he came to know Admiral Robert FitzRoy, another highly skilled surveyor and later founder of the Met Office. FitzRoy became Beaufort's protégé and it was Beaufort who made the necessary arrangements to enable FitzRoy to Command the Beagle for a voyage to chart South America and the Galapagos Islands. FitzRoy was keen to have a fellow gentleman on board with whom he could converse as an equal and asked Beaufort to find him the right man. Beaufort identified the young Charles Darwin who went on to develop his theories of evolution by natural selection as a result of what he had observed on the Galapagos.

As a skilled surveyor Beaufort knew the value of accurate measurement and became increasingly dissatisfied with the standard means of measuring and recording wind speed in naval logs. He had kept weather diaries for much of his career and created the Beaufort Scale in 1806 whilst in command of HMS Woolwich. All of these diaries are available from our Digitial Library & Archive. On the page of his weather diary he notes 'hereafter I shall estimate the force of the wind according to the following scale, as nothing can carry a more uncertain idea of wind and weather than the old expressions of moderate and cloudy etc. etc.'. Beaufort's first scale had 13 forces and he also developed a series of 'weather letters' which could be used to describe various states of the sky. 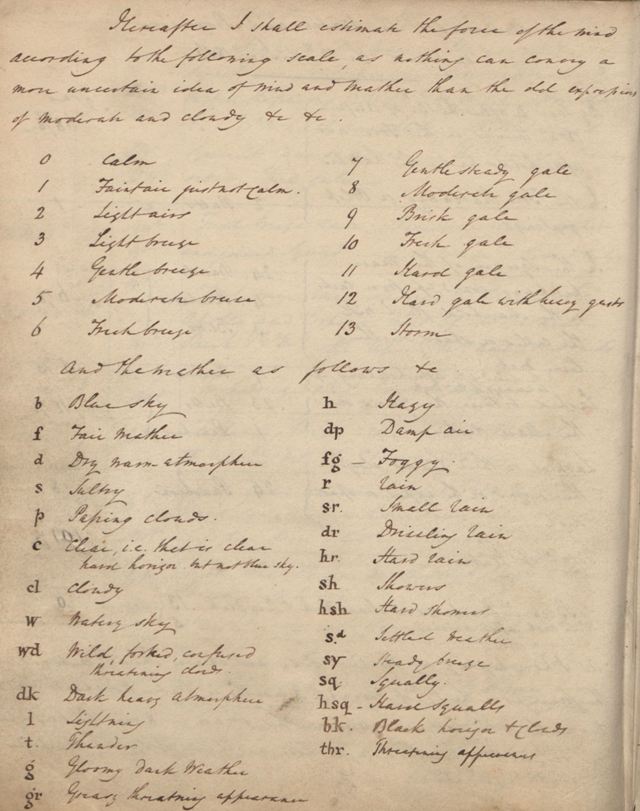 Beaufort revised his scale in 1807 to the more familiar 12 forces with the strongest being described as 'hurricane'! He also reduced the number of weather letters to a more practical amount for individual recognition. 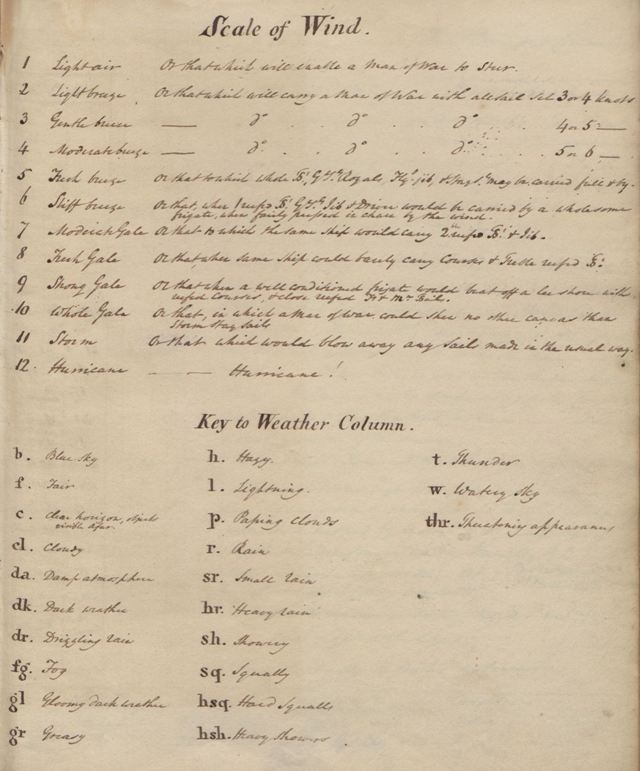 In his final version of the scale, produced in 1810, Beaufort also added descriptions of the effect of each force on a Royal Naval Frigate thus creating the earliest 'impact scale'. 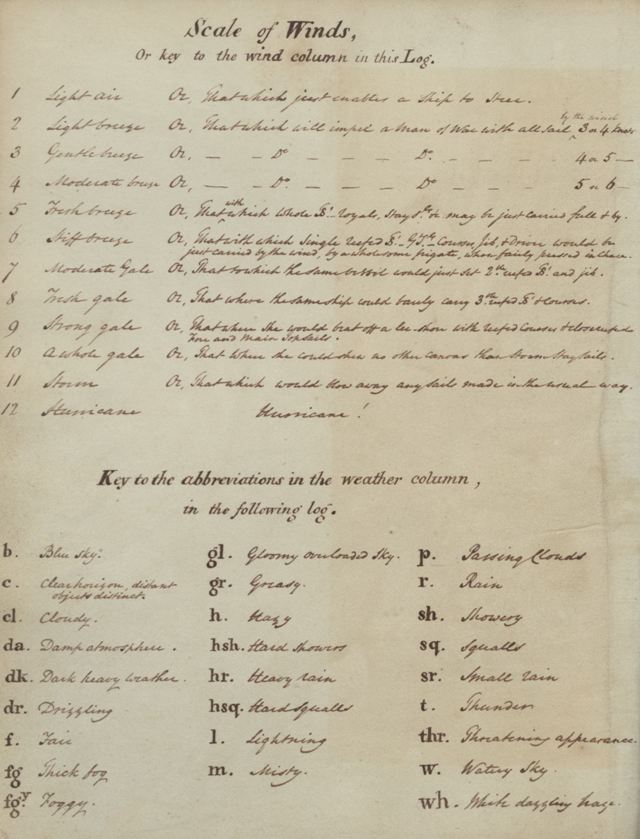 Within a relatively short period of time Beaufort persuaded the Royal Navy to adopt his wind scale and weather letters and the influence of British naval power in the mid 19th century soon resulted in other countries around the world adopting the same scale. The Beaufort Scale has become part of the language of the weather around the world and remains in use to this day, especially in marine forecasting.

The complete Weather Diaries of Admiral Beaufort have been scanned and are available to view in our online Digital Library and Archive. They include references to various key events including the battle of the Glorious First of June, in which Beaufort played an active part, and to the Battle of Trafalgar with entries noting receipt of new of the victory and the arrival in Portsmouth of various of the ships involved in the battle including HMS Victory with the body of Nelson on board. 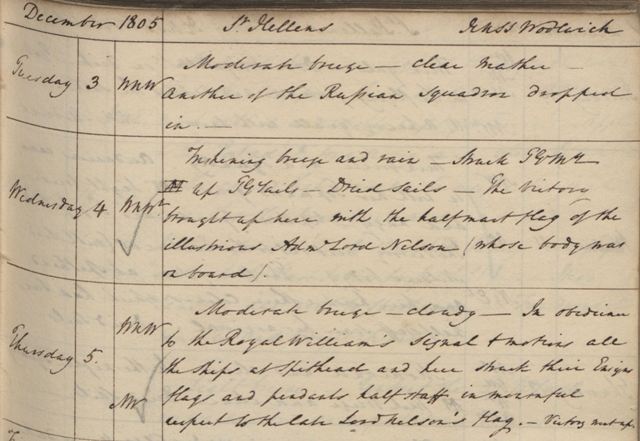