The following three documents from our archives illustrate the lives of three very different men. For the vast majority of combat forces the cessation of hostilities on 11 November 1918 marked an end to wartime activities, but life for the staff of the Meteorological Office continued largely unchanged.

Major Ernest Gold was a forecaster of great practical ability and was selected to establish the first operational meteorological service for the British Armed Forces. The Meteorological Field Service, known universally as Meteor R.E. (Royal Engineers) was established in the summer of 1915 and operated from the British Expeditionary Force General Headquarters at Montreuil, France. The staff comprised Major H.G. Lyons, Royal Engineers, who would run the organisation, and two Meteorological Office staff namely Ernest Gold and AEM Geddes who were granted temporary commissions in the General List of Captain and Lieutenant respectively. Over the ensuing years Gold and Meteor R.E. provided critical forecasting for the various army groups and the RAF and he successfully demonstrated the vital role of meteorologists to the armed forces. With the end of the war and the beginning of negotiations at Versailles he also oversaw the first developments of international aviation services.

These pages from the forecast diaries of Major Ernest Gold show no difference in the types of forecast he was issuing before the Armistice compared with after. His work continued entirely unchanged and indeed he does not even mention that the war has ended. Although a ceasefire was in operation, the military had to remain in a state of combat readiness until all the terms of the Armistice had been fulfilled. This meant continuing to forecast for the Army and Royal Artillery, in case of renewed hostilities and gas attacks, and for the RAF who were now responsible for transporting personnel between various locations and to and from the peace conference at Versailles. 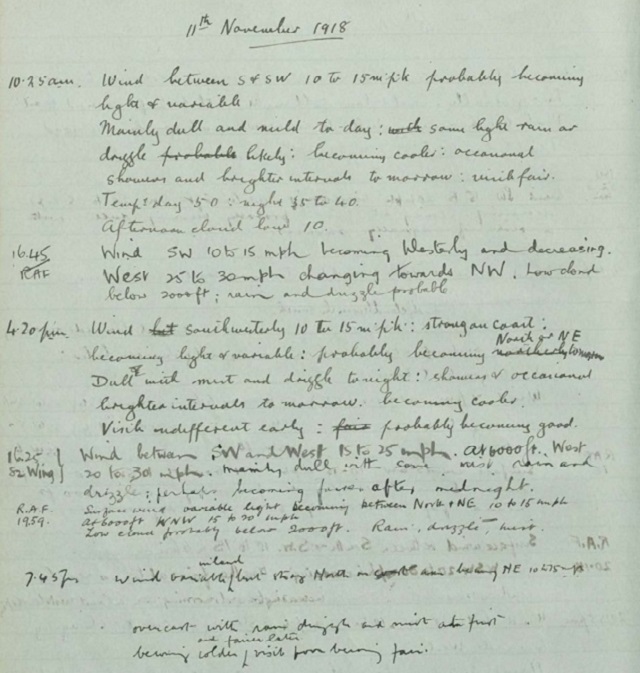 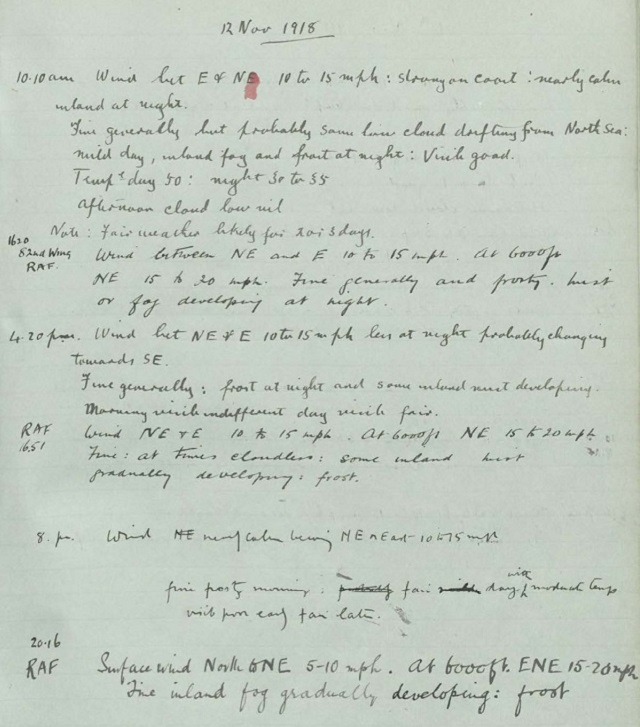 The work of Lempfert illustrates the important role played by the Meteorological Office at home during the war. The staff in London provided critical support to their colleagues in France providing data, giving additional forecasting support where needed and supporting training for Royal Engineers and Royal Navy units in the UK and abroad. Indeed, in order to ensure that support was always available, it was during the war that the Meteorological Office in London became operational 24/7 for the first time.

Lempfert was the Head of Forecasting at the Meteorological Office and had been the first choice of its director, Napier Shaw, to lead the new Meteorological Section of the Royal Engineers but instead the role was given to Ernest Gold. The reason for this is not known, but both of Lempfert's parents had been born in Germany and this may have played a part in the decision.

Although not serving in France Lempfert led the forecast division in London throughout the war and worked as a forecaster on the bench, even taking on night duties. Under his leadership the Meteorological Office in London supported their colleagues in France with five telegrams per day providing forecasts and coded reports in five-figure groups. The choice of five figures is believed to have arisen because the telegraph company charged per word and regarded the average word to be five letters long (five figure groups still remain common in transmitting meteorological information!).

The work of the staff in France was crucial, difficult, and dangerous. But without the continuous support from Lempfert and his team back in London their effectiveness and success would have been greatly reduced.

Amongst the information produced in London were the Special Weather Reports, which illustrate the wealth of information the London office could provide to support their colleagues in France. These reports contain the only indication of the Armistice found anywhere in the official output of the Meteorological Office. The ‘Enemy Point of View’ section ceased production from 12 November 1918. 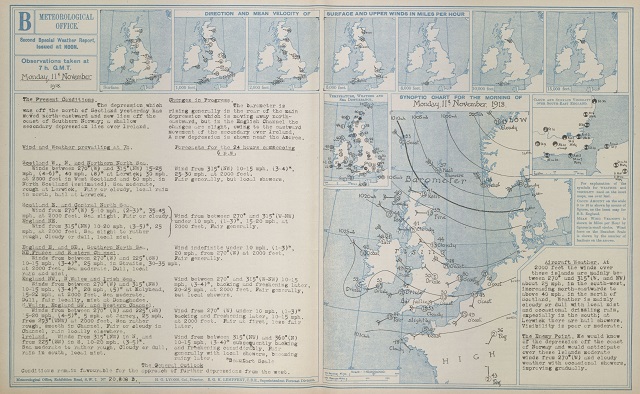 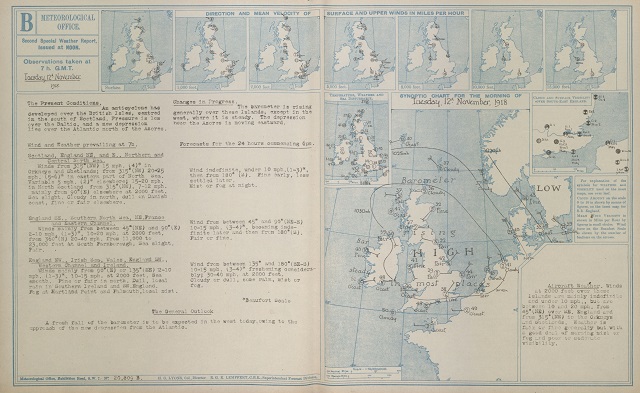 Corporal, later temporary Second Lieutenant, Harry Cotton, like many other observers working in France during the war, had no previous meteorological training but was deemed to have sufficient academic skills to qualify him as a meteorological observer upon joining up in 1916. On arrival in France he was interviewed by Ernest Gold, who thought him suitable to become a field meteorologist. This entailed working on the front lines, sending in reports when the wind was liable to permit gas attacks by either side, providing observations to the forecasters based at General Headquarters (GHQ), and undertaking balloon ascents to provide observation data for the Royal Artillery to assist with high angle firing. Cotton’s role was unusual in that he had no military training, very limited seniority, and yet direct authority from GHQ to demand priority telephone calls in order to send back gas warnings and travel in staff cars to reach observation sites. The odd position of being attached to a range of Army Units for food and shelter but being answerable only to GHQ for his work provided Cotton with a great range of frustrating and amusing experiences.

After the war Cotton wrote his memoirs. In them he described the humour, frustration, normality, horror and fear of life on active service. The full typescript of his account, ‘Moon in Aquarius’, is held at the National Meteorological Archive and an edited version was later serialised in the Meteorological Magazines for 1979 - 1980. Like Gold and Lempfert, Cotton’s work did not stop following the cessation of hostilities. In the following pages from his original typescript Cotton writes movingly of his reaction to the Armistice and the horror of the post Armistice advance through the ‘dreadful landscape of Passchendaele’. 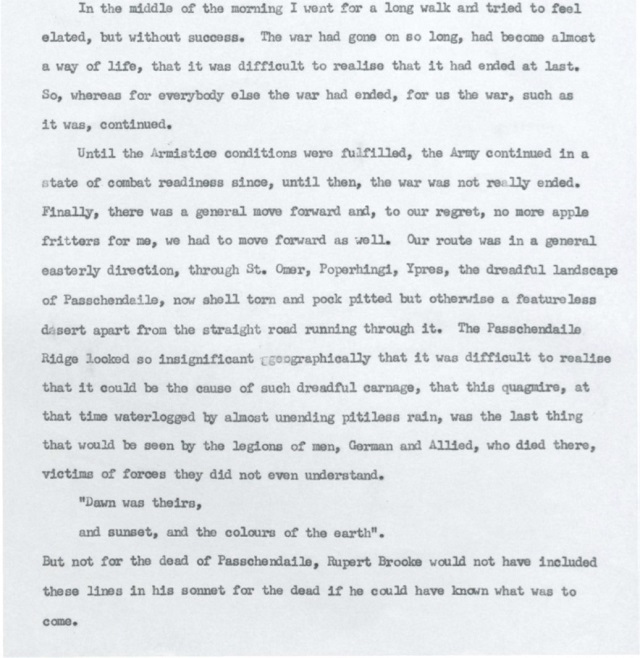