On the night of 25th/26th October 1859 a severe and slow moving storm struck the British Isles. It was considered to be the most severe storm to hit the Irish Sea in the 19th century. The storm depression was first noted in the Bay of Biscay near Cape Finisterre on 24th - 25th. The centre progressed northwards over Britain from Cornwall to the Yorkshire Coast and the strongest winds in the system developed as a rather narrow stream from the N or NNE over the Irish Sea. The winds reached hurricane force 12 on the Beaufort Scale and were estimated at well over 100mph. Wind speeds recorded in the Mersey were higher than any previously recorded.

The storm took 800 lives and 133 ships with a further 90 badly damaged. Twice as many people were lost at sea around the British Isles than in the whole of 1858. The most famous ship to founder during the night was the steam clipper Royal Charter, which foundered on the north coast of Anglesey. The ship was on the last leg of her two month journey from Melbourne to Liverpool. She was one of the fastest and most famous emigrant ships operating during the years of the Australian Gold Rush and could carry up to 600 passengers and some cargo.

As conditions in the Irish Sea deteriorated, on board the Royal Charter her captain had to decide whether to seek shelter at Holyhead or carry on for Liverpool. He chose to continue but by 10pm on the 25th the wind had reached force 10 and continued to rise and sea conditions prevented the Liverpool Pilot reaching the ship. At 11pm the decision was made to anchor but at 1.30am the port anchor chain snapped, followed by the starboard chain an hour later. Despite cutting the masts to reduce the drag of the wind the Royal Charter was driven inshore and her steam engines were unable to make headway against the gale. She struck the rocks at Point Alerth and, battered by huge waves, quickly broke up. The precise number of dead is not certain as the complete passenger list was lost in the wreck however it is thought that about 459 lives were lost including all of the women and children aboard. There were only 40 survivors and it remains the highest death toll of any shipwreck on the Welsh coast.

The wreck gained much coverage in the national press and focused attention on the need for storm warnings to reduce further such losses. Robert FitzRoy, founder of the fledgling Meteorological Office, which had been collecting observations from around the British coastline since 1854, believed that his department could provide such a service. He produced a detailed report with charts to prove that the storm could have been tracked and its path predicted. Through his analyses of the Royal Charter and other storms FitzRoy demonstrated the validity of his models and proposed a national storm warning system. There was much doubt amongst the scientific establishment that the weather could be predicted in any meaningful way but the government permitted FitzRoy to test his new science of weather forecasting and to establish a Storm Warning service. 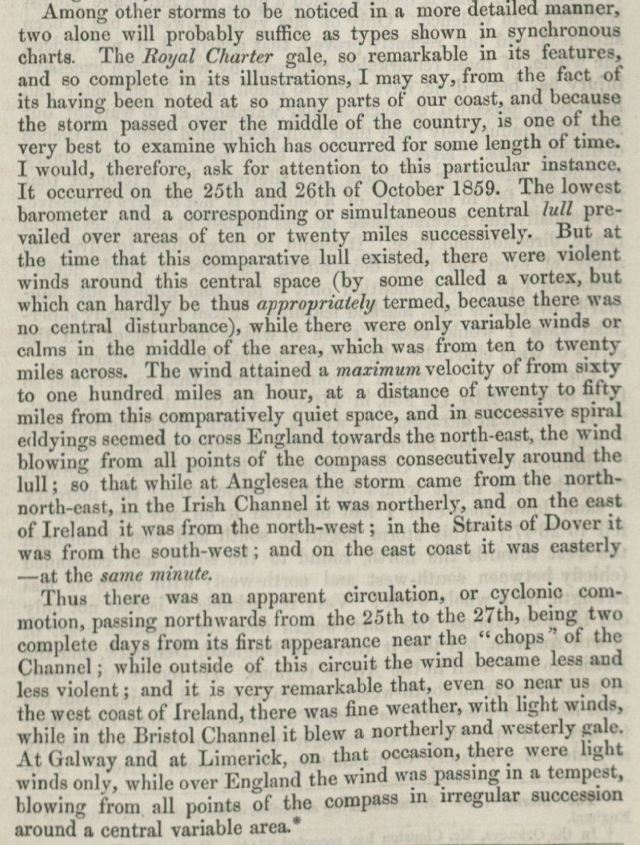 On 1st September 1860 weather reports began to be collected at the Meteorological Office in London via electric telegraph and on the 5th February 1861 the first storm warning was issued. This used a combination of cones and drums hoisted on a staff to warn ships both in harbour and along the coast of an approaching gale. On the Tyne the warning was disregarded and many lives were lost however the accuracy of the warning meant that further warnings were heeded and the scheme was widely popular. FitzRoy became a hero to many in the maritime community, including the RNLI. 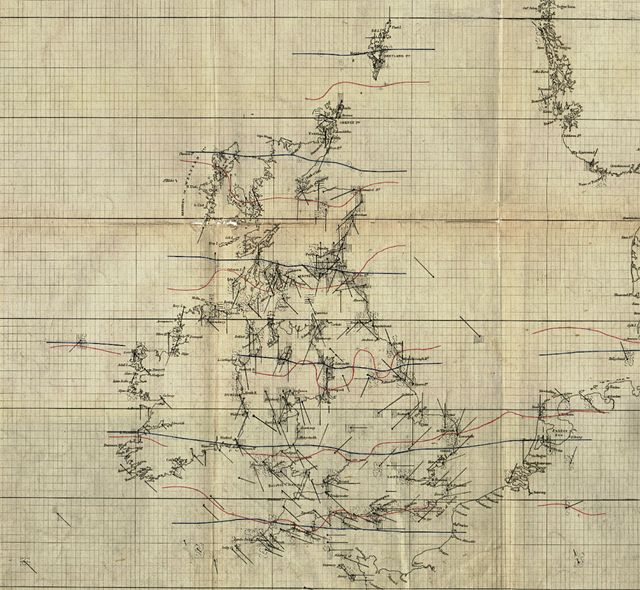 This is one of the original charts produced by FitzRoy to demonstrate his understanding of the Royal Charter Storm. Wind strength is shown by the length of the line, red and blue lines represent pressure and temperature and weather conditions such as cloud and rain are shown by the markings in the small boxes.

After his death in 1865 the storm warning service was discontinued due to the ongoing debate about its scientific accuracy but the inevitable increased loss of life caused a public outcry and a campaign in press and in parliament saw the restoration of storm warnings in 1867. The service continues to this day and is now known as the iconic Shipping Forecast. 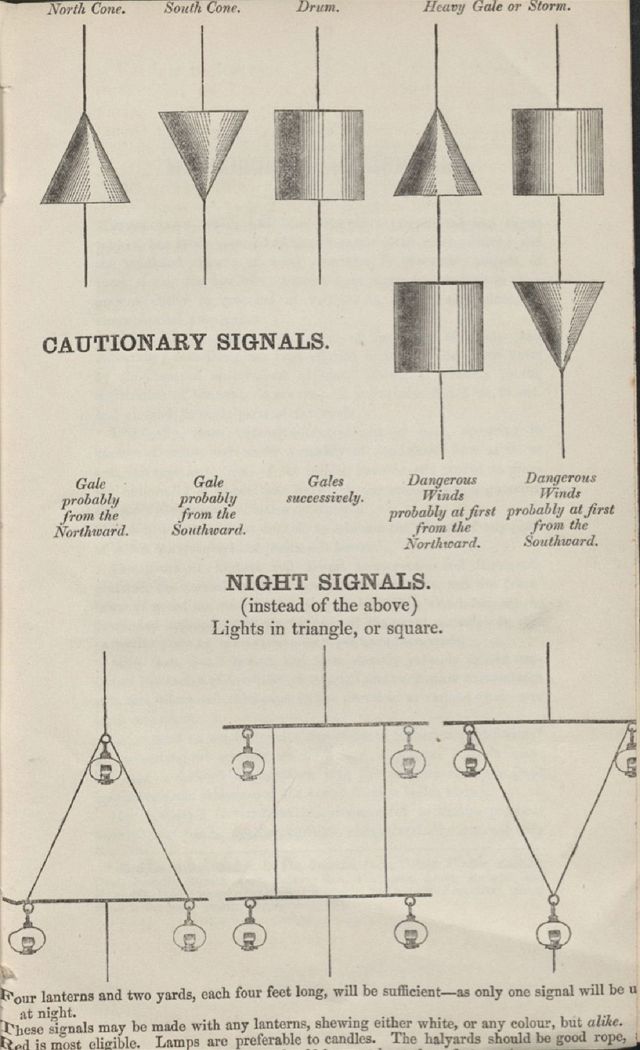 This is the information booklet produced by FitzRoy to enable ship captains to understand and interpret his storm warning signals. He also produced a guide to assist with interpreting changes in the barometer, this was especially useful to fishermen operating from smaller ports without access to warning signals.