The Terra Nova expedition of 1911 - 1912 is best known for the courageous but ultimately ill fated attempt to race to the South Pole. The fate of Captain Robert Falcon Scott and his team is well known but many do not realise that scientific investigation and discovery lay at the heart of the British Antarctic Expedition. The meteorological registers produced by the Terra Nova expedition are held in the National Meteorological Archive and are available from our Digitial Library & Archive.

The expedition team spent many months, and two Antarctic winters, studying the unknown continent. An important part of their investigations was to make a detailed record of the weather and climate and to this end Scott appointed a team of meteorologists led by George Simpson, nicknamed 'Sunny Jim' because of his resemblance to the character on 'Force' cereal packets.

Whilst the main party was based at Cape Evans a Northern Party was posted to Cape Adare in East Antarctica (February 1911 - January 1912), where they survived their first Antarctic Winter. In the register below it can be seen that the wind gusted to hurricane force for much of 9th May, this led the observer Raymond Priestley to comment that it was 'blowing like hell' and to reference a phrase from Dante's Inferno. 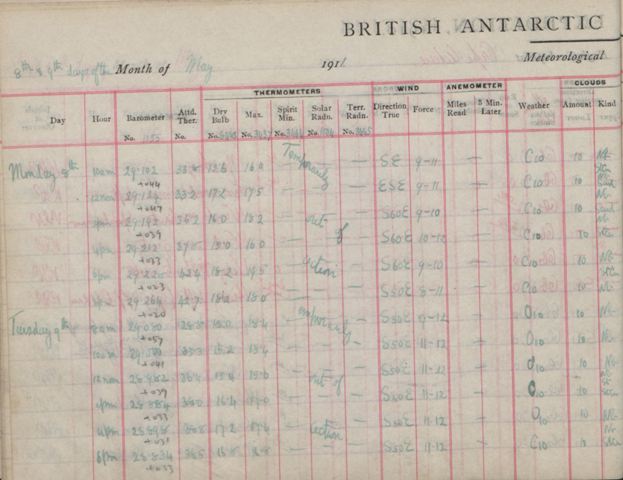 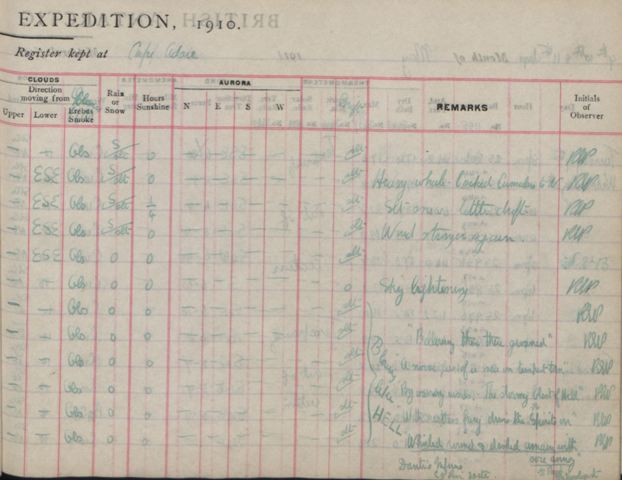 The Northern Party demonstrated considerable ingenuity when making Meteorological Observations. The image below shows the alarm clock they designed to help them make night time observations without having to stay awake. The device was called a 'Carusophone'.  Despite the severity of the conditions the men did not lose their sense of humour and Priestly penned the poem' Meteorological Alarm' in the back of their meteorological register. The text reveals that despite its functionality the men were not overly fond of their alarm clock. 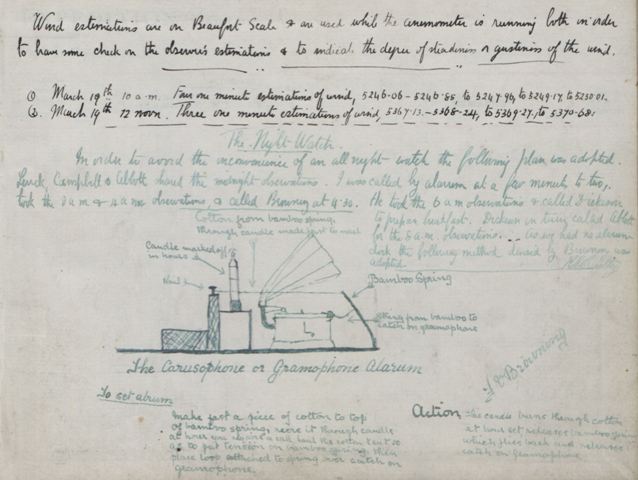 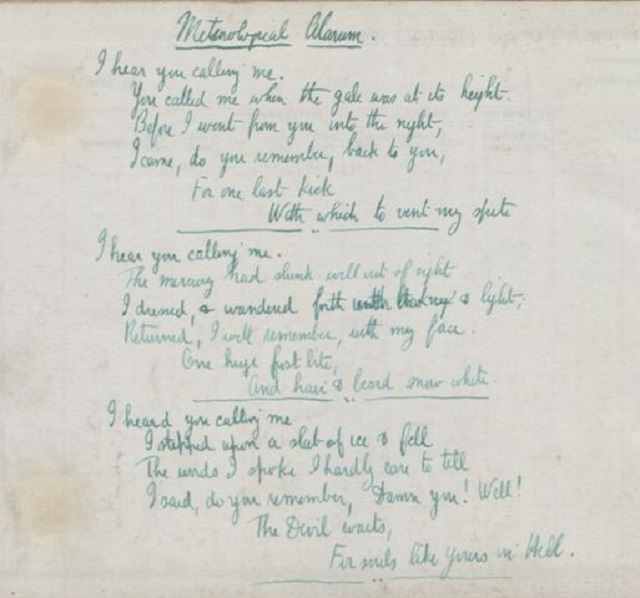 The men were picked up in Spring and taken to a second site further along the coast. Their second encampment was intended to last only a few weeks and was provisioned accordingly but heavy pack ice prevented the support ship 'Terra Nova' from reaching them and they were forced endure a second Antarctic Winter. Somewhat miraculously all of the Northern Party survived after digging themselves an ice cave and living on seals and blubber. They reached base camp at Cape Evans on 7 November 1912 after a perilous trek over the ice.

The lowest recorded temperature encountered during the Terra Nova expedition was experienced by Bill Wilson, Henry Bowers and Apsley Cherry-Garrard who under took to trek to Cape Crozier to recover three Emperor Penguin eggs. It was believed that the embryos inside would reveal the evolutionary link between reptiles and birds. Cherry, who later described the journey in his book 'The Worst Journey in the World', never recovered from the expedition. Bowers and Wilson would perish with Scott. The eggs are considered to be among the top ten most important items owned by the Natural History Museum, ranking alongside Archaeopteryx and a sample of moon rock from the Apollo landings. The lowest temperature recorded in their meteorological log for the journey is -77.5 Fahrenheit (-60.8 Celsius). 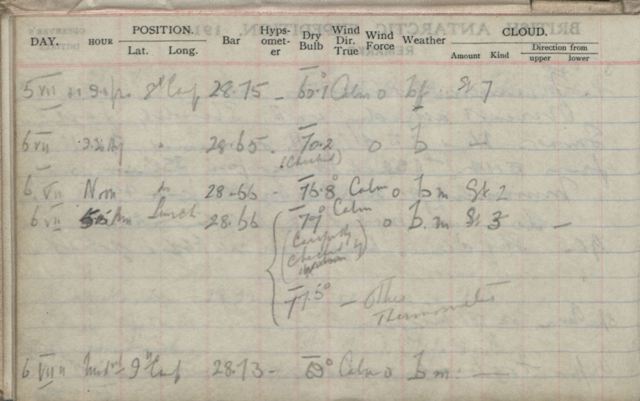 Scott and his team continued to make weather observations throughout their trek to the South Pole. Their meteorological log was found in their tent alongside the bodies of Wilson, Scott and Bowers. The original is held at the Scott Polar Research Institute but this fair copy was made by the search party shortly after returning to the main base. This is an image of the very last page of observations, made as the expedition was reaching its tragic conclusion.

The collection of meticulous meteorological records which are now kept at the National Meteorological Archive have become one of the great legacies of the Terra Nova Expedition. After his return from the Antarctic George Simpson used the data to write an important account of the weather and climate of the continent. He concluded that Scott and his team had met with exceptionally low temperatures on their return from the Pole and also showed that the transition from Antarctic summer to winter was far more rapid than had previously been supposed.