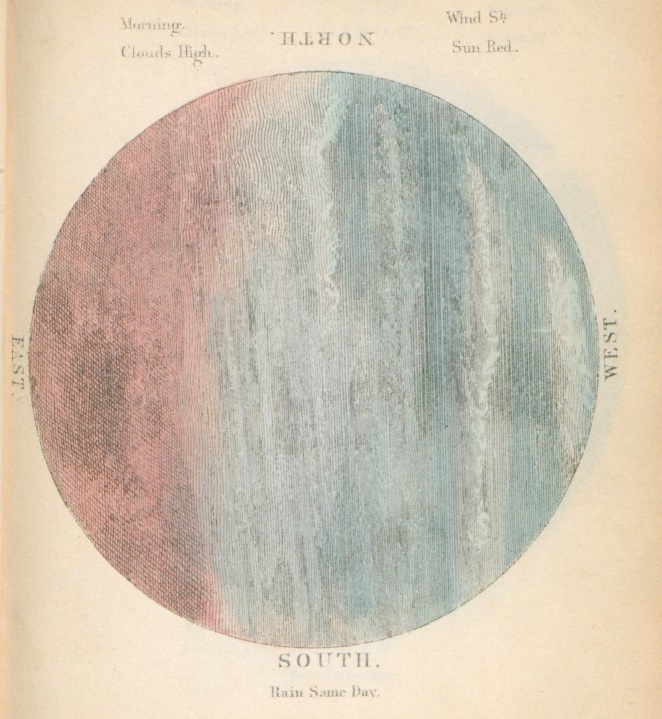 It consists of a wide range of accumulated proverbs and superstitions referring to changes in the weather on both daily and seasonal levels and ranges from the accurate to the absurd. Much Weather Lore infers signs of change from plants and animals, whilst other aspects focus on astronomy, astrology and clouds. We hold a significant collection of Weather Lore books in the National Meteorological Library and Archive, some of which are available through our Digitial Library & Archive.

A significant strand of Weather Lore focuses on changes in animal and plant life and how this fortells changes in the weather and the seasons. One of the most comprehensive in the NMLA collection is ‘Weather Lore’ by Richard Inwards. Published in 1869 this volume includes considerably more signs of rain or poor weather than fine conditions. Very few signs indicate good weather; thirty of the thirty two animal signs are about rain, snow or bad weather and forty two of the forty seven bird signs! 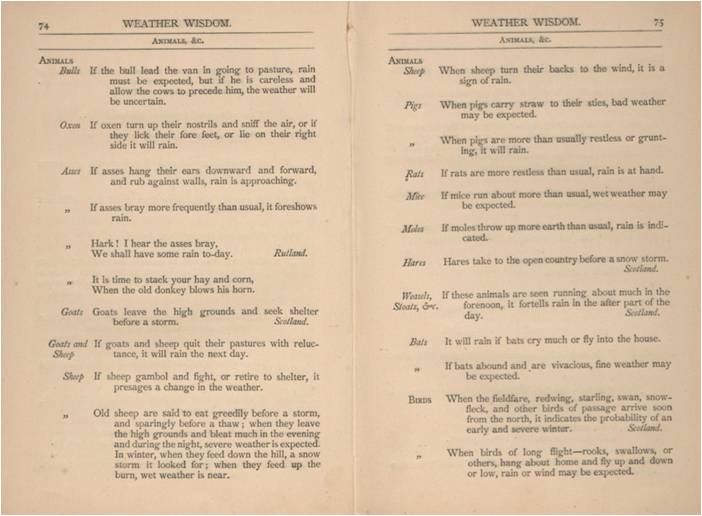 The presence or absence of some animals was also used as a sign of seasonal change. As early as the  4th century BC Aristotle suggested in his ‘History of Animals’ that swallows hibernate in mud banks or even undergo a form of metamorphosis and spend winter under water and the theory stuck. Even the great naturalist Gilbert White referred to the possibility in his ‘Natural History and Antiquities of Selbourne’ written in 1789. These theories show an understanding of hibernation and migration, both of which could be observed in any garden or woodland, but reveal that migration had not been conceived before regular international travel.

An interesting example of the use of astrology in Weather Lore is Leonard Digges, 1605 ‘Prognostication everlasting of right good effect’ . This includes a number of examples of the use of zodiacal signs to predict the weather or as Digges puts it ‘How the weather is iudged (sic) by the Orientall and Occidentall station of Planets, with their Combustion in the 12 Signes Celestiall.’ Full text available from our Digitial Library & Archive. 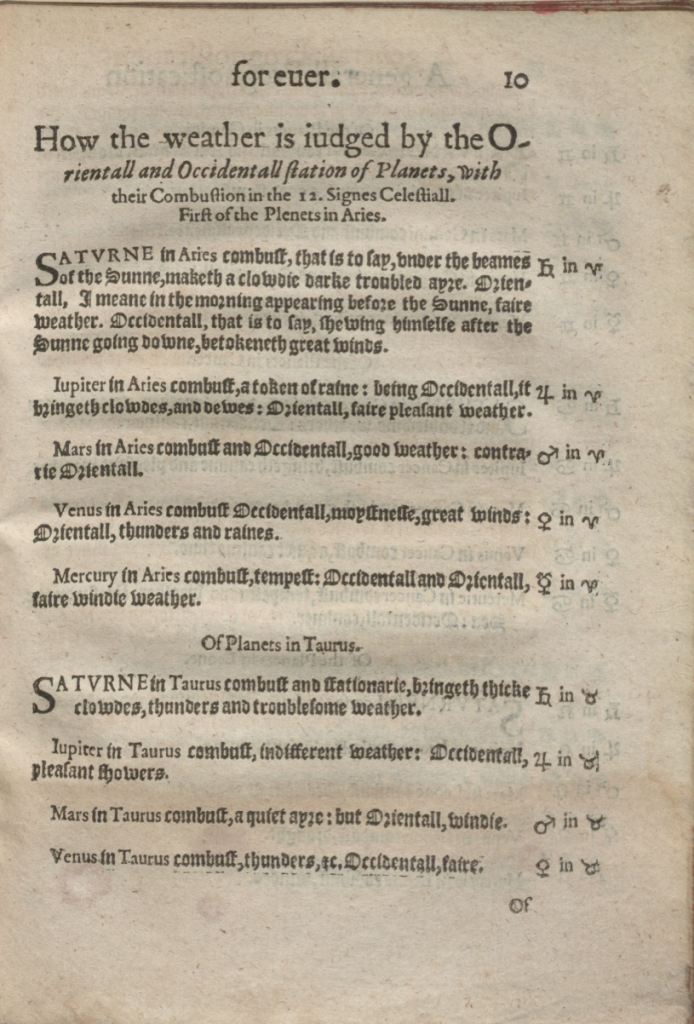 One of the most accurate examples of Weather Lore held in the National Meteorological Archive is the ‘Shepherd of Banbury’s Rules to judge the changes of the weather’ of which the archive holds a potentially unique copy dating to 1670 and many later editions. The rules include a version of the well known saying ‘Red Sky and Night’, which has a sound basis in meteorology, as well as descriptions of some of the key types of cloud and their associated weather. Full text available from our Digitial Library & Archive. 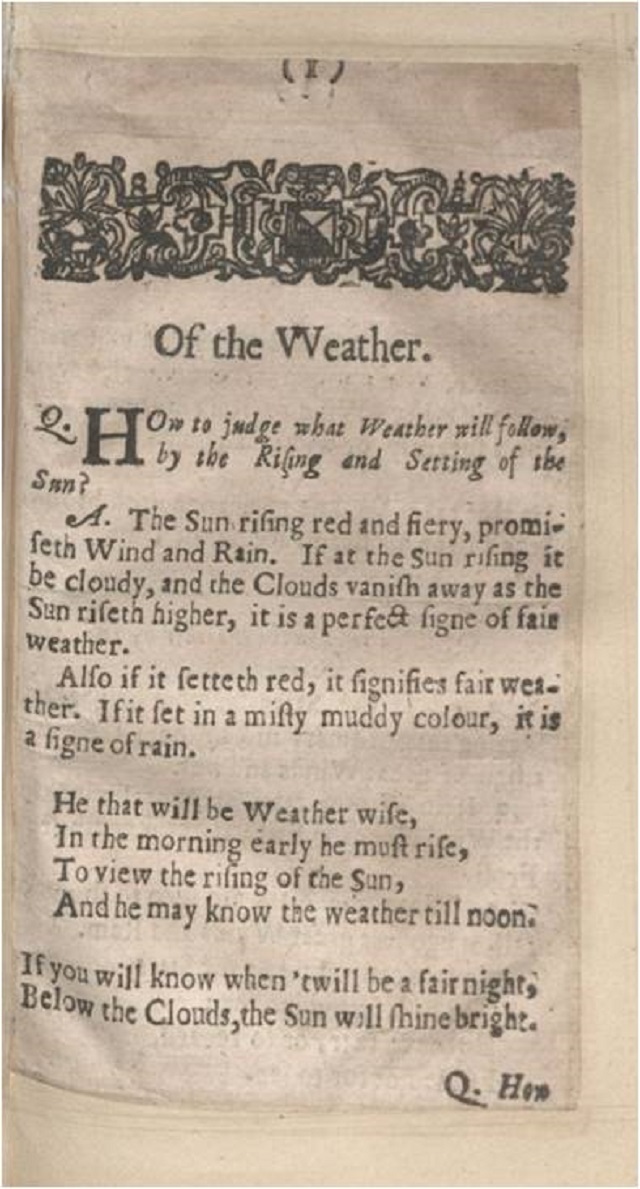 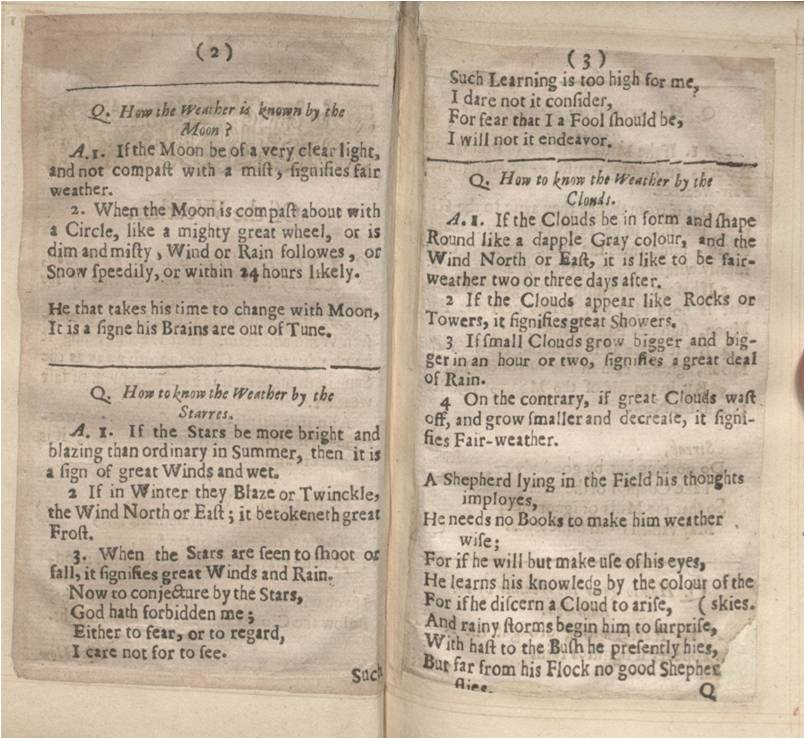 Claridge, J. The Shepherd of Banbury’s Rules to judge the changes of the weather. 1670

Although in the modern era much Weather Lore might be considered of limited accuracy this is certainly not universally the case. Some signs in nature are recognised as accurate indications of an ensuring change in the weather and the Shepherd of Banbury’s rules were considered sufficiently accurate and useful that several pages of the Met Office Meteorological Glossary were devoted to them even as late as the early 20th century.