Last month (on 10th September at the European Meteorological Society meeting in Copenhagen), the 2019 Harry Otten Prize for Innovation in Meteorology was awarded to Malcolm Kitchen of the Met Office and Dr Chris Brunt of Exeter University. Their idea concerns a new, low-cost technique for obtaining information on the refractivity structure of the atmosphere.

The need for new measurements

Humidity can vary significantly over short time and space scales, but is difficult and expensive to measure directly. In-situ measurements are currently limited mainly to those from weather stations and a small number of radiosondes. These data are completely inadequate for resolving the 3-dimensional structure. For this reason, methods have been developed in recent years for the measurement of atmospheric refractivity, which has a strong dependence upon humidity and can be an effective substitute in numerical weather prediction (NWP) model assimilation.  The idea concerns a new opportunistic method for acquiring large volumes of refractivity information that is complementary to the existing methods.

It is proposed to use simple two-element interferometers sited on hill tops to measure the angle-of-arrival (AoA) of radio transmissions that have undergone measurable bending by the atmosphere. If AoA is measured, and the point of origin of the signals is known accurately, then the bending angle can be computed and information extracted concerning the refractivity structure of the atmosphere. The radio transmissions concerned are the 1090 MHz ADS-B transmissions which all commercial aircraft are mandated to broadcast for air traffic and anti-collision purposes. The signals will undergo measurable bending:

These transmissions are considered ideal for purpose as they contain information about the position of origin, and the sources are well distributed throughout the troposphere.  A preliminary sensitivity study suggests that the aircraft position is known sufficiently accurately for the bending angle calculation, but in order to detect meteorologically significant changes in refractivity, AoAs of ≲ 2° above the horizon will need to be measured with an accuracy of ∼0.01° or better. This in turn will require an interferometer with a clear horizon and a (vertical) baseline of ∼10 m.

ADS-B broadcasts conveniently contain the essential information on the aircraft location and open-source ADS-B decoders are readily available. The technique is then self-contained, requiring no external inputs or consents, and a minimum of additional hardware or infrastructure. It could be implemented anywhere in the world with a usable density of civil air-traffic.  ADS-B messages are broadcast every few seconds and could be received by any hill-top interferometer that has line of sight.

Approximately 10,000 aircraft enter or leave UK airspace each day, with similar numbers landing and taking off from UK airports. There is then the potential to acquire ∼106- 107 bending angle measurements per day, although no doubt many will be highly correlated. 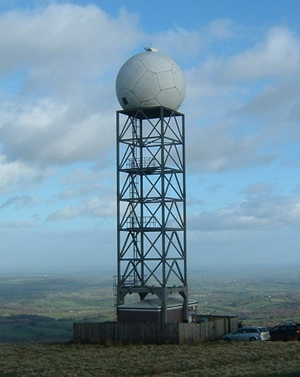 The 20m radar tower at Clee Hill in Shropshire would be an ideal structure upon which to mount an interferometer.

An experimental interferometer is being used to assess the feasibility of the technique and determine the precision of angular measurement that can be achieved using low-cost equipment.

Initial results from the experimental interferometer 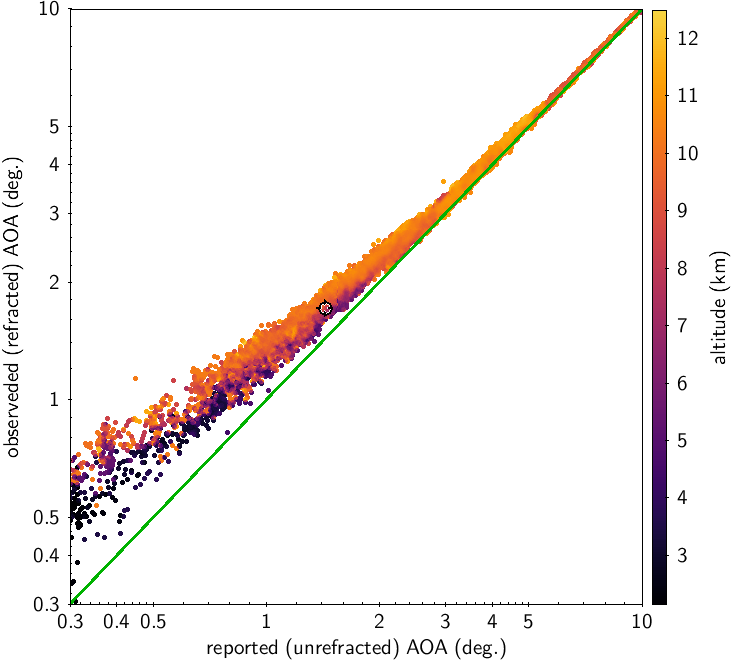 Some initial results from the experimental interferometer (image from Exeter University).

Measured angles of arrival (AOA) are plotted against aircraft reported (un-refracted) AoA deduced from the aircraft position. AoA is defined relative to the local horizon (90° – zenith angle). The data points are colour coded according to the reported altitude of the aircraft and would be all clustered around the green 1:1 line in the absence of refraction. The plot shows that signals received at low AoA and originating from higher altitudes, tend to undergo greater amounts of bending.

The technique is currently assessed as being at a NERC Technology Readiness Level (TRL) of around 4. Although the technical development has been successful so far, there are important questions around the utility and exploitation of the data that have yet to be addressed.

Most of the Harry Otten award money (€25,000) will be used in funding a PhD studentship at Exeter University to consider these questions, with the aim of achieving TRL 6.