How to measure the heating of the planet?

November 2020 - How should we monitor global warming from year to year?

How should we monitor global warming from year to year?  It would be reasonable to think that the global average surface temperature gives a reliable measure of how much our planet is heating.  Surface temperature measurements are important for many reasons, but several studies have shown that they are not the clearest indicator of planetary heating on timescales of years to decades.  By comparing observations of different ‘heating indicators’ since the mid-1980s, Allison et al (2020) show that looking deeper in the ocean reveals a more reliable signal. 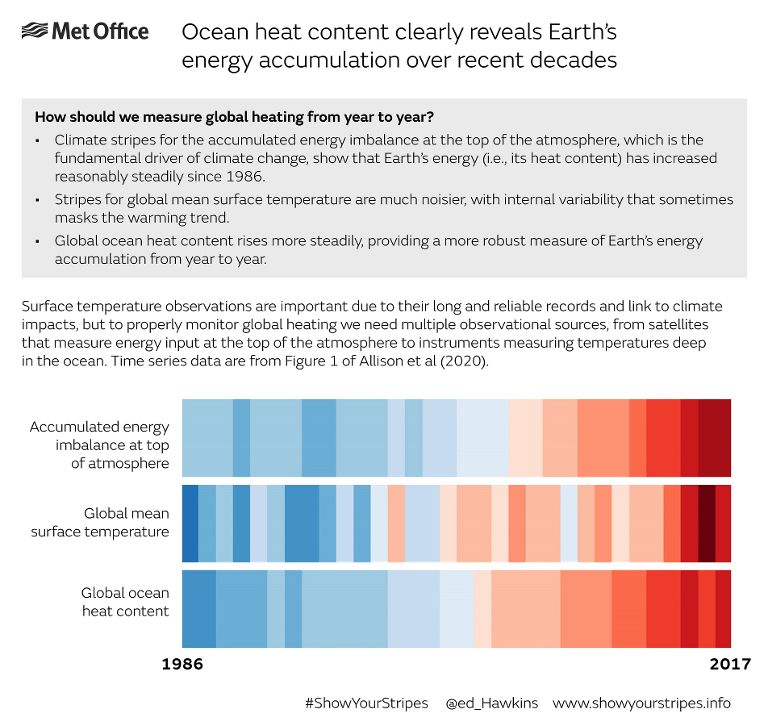 Greenhouse gas emissions cause an imbalance at the top of the atmosphere (TOA) between the energy that is received from the sun and that which the Earth emits back to space.  Termed Earth’s energy imbalance (EEI), it leads to an accumulation of energy (heat) in the Earth system over time, which causes a variety of ‘symptoms’ that constitute climate change.  The most widely known symptom of EEI is an increase in global mean surface temperature, measurements of which are commonly used to quantify the magnitude of climate change and define targets for policy discussions.  Monitoring global mean surface temperature is useful because it is linked to many important climate impacts and it has a long and reliable historical record.  However, Earth’s surface temperature, even its global average, is strongly affected by internal climate variability, and is not necessarily representative of changes in energy on timescales of up to around a decade.  This was evident during the period between 1998 and 2012, when surface temperature barely increased, leading to much discussion of a “global warming hiatus”.  It was clear, however, that planetary energy continued to increase during those years, prompting the question of whether surface temperature is the most reliable indicator of planetary heating on these timescales.

The component of the Earth system with the largest heat capacity is the ocean; there is as much energy in its upper 2.5m as is found in the whole atmosphere, and more than 90% of EEI goes into increasing ocean heat content (von Schuckmann et al, 2016, 2020).  Previous studies using climate model simulations have suggested that, on timescales of a year to a decade, the energy imbalance at TOA may have a much stronger relationship with the change in ocean heat content than it does with the change in surface temperature (Palmer and McNeall, 2014).  But can we see this in observations too?

In this paper we use a variety of observational datasets to compare different indicators of planetary heating since the mid-1980s (Figure 1).  A new satellite-based reconstruction of the net energy flux at TOA has recently become available (based on Allan et al 2014 and Liu et al 2020), and when this is accumulated over time it gives an estimate of how Earth’s energy (i.e., heat content) has increased since 1986 (black line).  It shows that the Earth has gained about 250 zettajoules (1 ZJ ≡ 1021 Joules) in that time (this amount of energy is roughly equivalent to every person on Earth continually boiling 34 kettles since 1986).  It also shows that the increase has been relatively steady.  We can compare this with three indicators of planetary heating: global mean surface temperature, global ocean heat content and global mean sea level (which is closely linked to global ocean heat content through thermal expansion).  It is clear from Figure 1 that while all the indicators follow the long-term heating trend implied by the TOA measurements, the global mean surface temperature has considerable variability on top of this.  Global ocean heat content and global mean sea level are much smoother; they are less affected by variability and do not show any lengthy pause in heating. 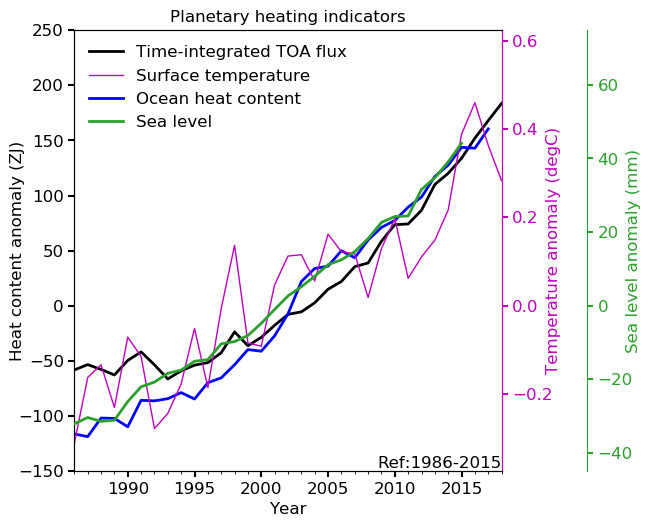 Why is ocean heat content more robust than surface temperature?

We can begin to understand why ocean heat content is less affected by noisy variability than surface temperature by looking at how global mean ocean temperature fluctuations vary with depth.  This is shown in figure 2 with the long-term warming signal removed to make the short-term variations more obvious.  Also shown in figure 2 is the Niño3.4 index, which the sea surface temperature anomaly in the eastern tropical Pacific and is a measure of El Niño Southern Oscillation (ENSO) activity.  Warm periods in the eastern tropical Pacific are El Niño events, and cool periods are La Niña events.  These fluctuations are reflected in the global mean ocean temperature; the upper 100m ocean temperature follows the Niño3.4 time series closely.  However, when the top 100m layer of the ocean is anomalously warm, the layer beneath is anomalously cool, and vice versa.  These anticorrelated layers indicate that heat is being rearranged within the ocean due to ENSO dynamics (Roemmich and Gilson, 2011).  The presence of these anticorrelated layers means that when ocean temperature is integrated over depth to calculate heat content, these anomalies compensate, smoothing out the effect of ENSO variability.  The interdecadal Pacific oscillation (IPO) is another example of internal variability that features ocean heat rearrangement, this time on a longer timescale.  This figure shows that by just looking at surface temperature we only see one narrow part of the picture; ocean heat content gives a broader view. 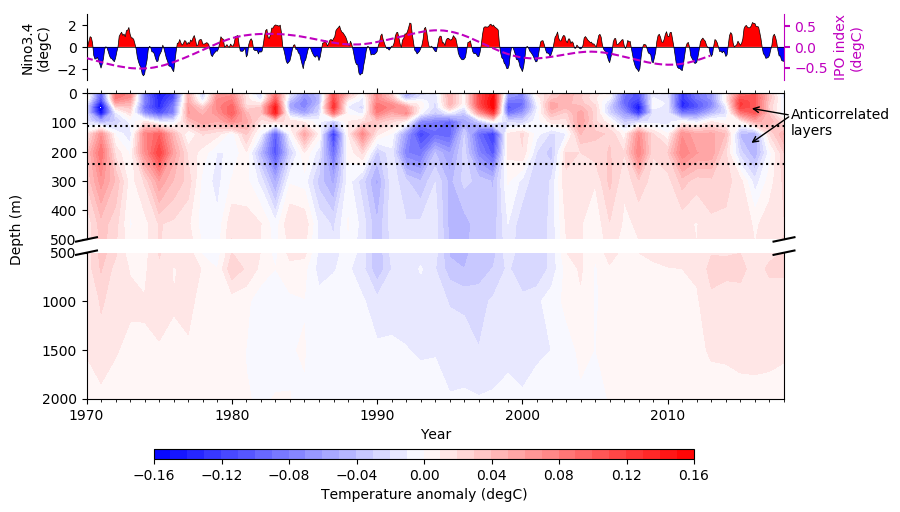 Figure 2:  Annual mean global mean ocean temperature as a function of depth (upper 2000m, with the upper 500m on a larger scale) and time (1970-2018).  Temperature at each depth has been linearly detrended to remove the long-term heating signal and focus on variability.  Ocean temperature data is from an updated version of the Met Office statistical ocean reanalysis (MOSORA; after Smith et al, 2015).  Niño3.4 index is calculated from Rayner et al (2003).  IPO index is from Henley et al (2015).  Figure reproduced from Allison et al (2020).