What are the chances of another hot summer like 2018?

September 2020 - New study published on the likelihood in upcoming years of the UK experiencing temperatures even higher than the record heat of summer 2018.

Climate extremes such as high temperatures or drought can have major impacts on society and place a spotlight on our preparedness for and resilience to such events. Having good estimates of their current likelihood feeds into an improved assessment of risk, which in turn informs planning and policy. The new study (1) described here estimates the chance in the current climate of exceeding the UK summer temperatures of 2018 when UK mean temperature reached 15.76°C. Scientists are continuing to explore if and how the method used may be applied to different extremes in the UK and around the world.

We know that the atmosphere is a chaotic system – with the flap of a butterfly’s wings, very different weather outcomes can arise from near-identical starting conditions. One of the questions that follows is how the summer temperatures that we have witnessed over the years could have looked different, or in other words: have we been lucky in the extreme temperatures that have affected the UK? Could conditions have been more severe? We only have one version of how the climate evolved in reality but what if we could simulate lots of different versions? The temperature extremes produced by these alternative versions would enable a better representation of the frequency of plausible extreme events in today’s climate.

This is the idea behind ‘UNSEEN’, UNprecedented Simulated Extremes using ENsembles. A large set of climate model simulations – or ensemble – provides the different versions of the climate. They simulate many more virtual summers than are available from observations alone, and some of these have higher temperatures across the UK than in 2018. These are conditions that are possible in the current climate but have not yet been experienced. The set of simulated summers is used to quantify the chance of seeing unprecedented high temperatures, while also enabling us to estimate how hot high-end extremes could be in today’s climate.

Estimating the chance of exceeding summer 2018 temperatures in the UK

The likelihood of exceeding the UK’s record breaking summer 2018 mean temperature of 15.76°C is estimated to be ~11% each year (Figure 1a), and much warmer temperatures are possible. An extreme of a 1 in 100-year magnitude would bring an average summer temperature of around 1°C greater than 2018. Against the backdrop of a warming climate, the chance of seeing temperatures higher than 2018 has increased rapidly over the last decades, from <1% in the 1960s to ~10% in the 2010s (Figure 1b). 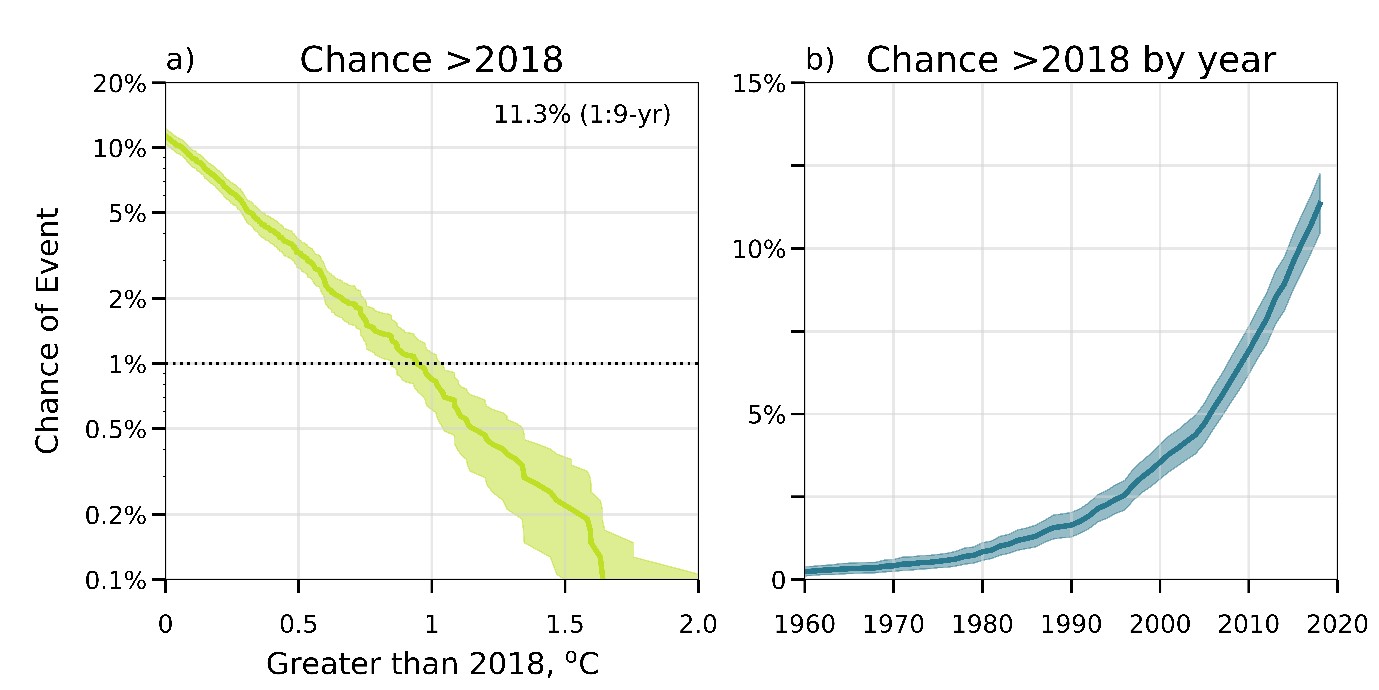 Figure 1. Applying UNSEEN to UK summer temperatures. a) UNSEEN estimate of likelihood of exceeding summer 2018, with central estimate in dark green and 95% confidence interval obtained via bootstrap resampling of the ensemble in pale green. Dotted line indicates the magnitude, relative to summer 2018, of a one in 100-year event. b) Change in likelihood of exceeding 2018 over time, calculated each year from the ensemble adjusted to represent that year’s climate. 95% confidence intervals calculated as before.

The dynamics of hot summers in the UK

An important benefit of the UNSEEN dynamical approach over simple statistical estimates is that the model simulations provide us with the wider climate conditions connected to the extreme of interest, which enables insight into the dynamics behind hot UK summers. By sub-selecting the model set of 4720 simulated summers based upon high UK temperatures, we get the average atmospheric circulation signature of hot summers (Figure 2).

The atmospheric circulation anomalies marked by red shading over the UK and northern Europe are indicative of warm temperatures at the surface. There is a clear wave pattern of alternating high (red) and low (blue) circulation anomalies reaching around much of the northern hemisphere, suggesting that there is influence on the UK from remote regions. The study describes possible influence from both the tropics and the Arctic, which projects onto the summer circulation over the north Atlantic and northern Europe, contributing to high temperatures over the UK.

Applying UNSEEN to other impact-relevant extremes

UNSEEN has been applied in several other cases, and research in this area is ongoing for impact-relevant extremes in the UK and around the world. Some examples follow: