On 11th March 2011 the Great East Japan Earthquake caused a tsunami that inundated part of the east coast of Japan causing catastrophic damage to three of the four operational reactors at the Fukushima Daiichi Nuclear Power Plant. 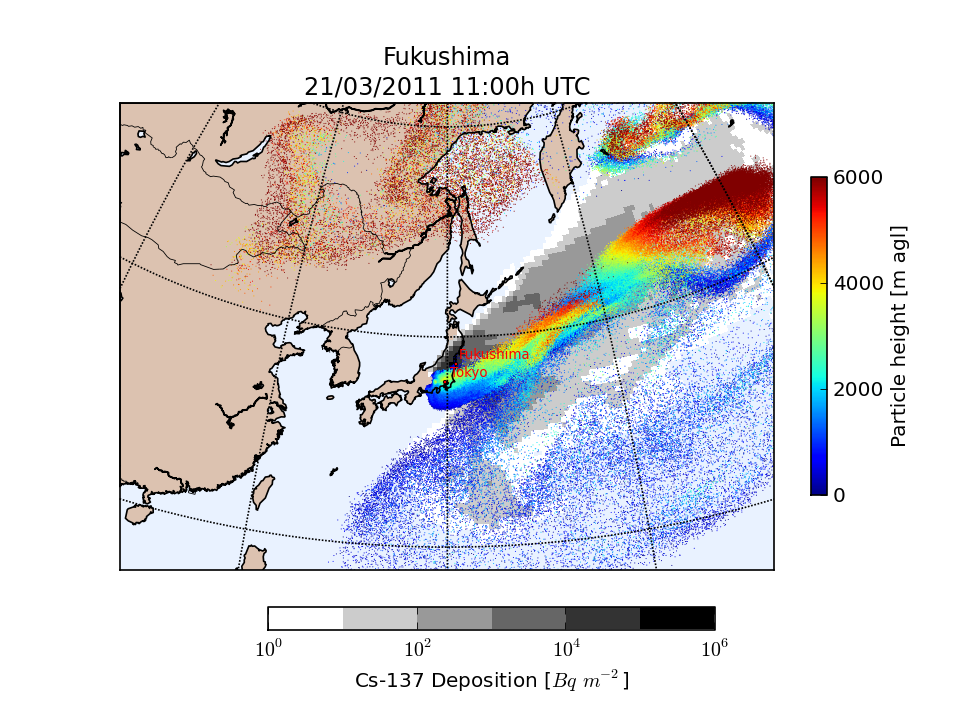 This emergency initiated the UK Government to set up a SAGE (Scientific Advisory Group for Emergencies) involving a group of UK agencies, including the Met Office, to deliver estimates of the possible spread and impact of the radioactive material to the UK Government. Initially, estimates of the spread of the material were provided assuming the release of a single type and unit quantity of radionuclide to quickly estimate the area affected by the radioactive material. This rapidly evolved into generating estimates focussed on potential impacts if further releases were to occur (“what-if” scenarios). In order to estimate the impact on human health, the type (or species) of radionuclides, the quantity of each radionuclide and how that varies over time are required as input. These were input into the Met Office dispersion model NAME in order to provide an estimate of the air concentration and deposition of each radionuclide. Doses were then estimated from the air concentration and deposition by linking NAME output to health modelling by PHE (Public Health England formerly the Health Protection Agency)). During Fukushima the Office for Nuclear Regulation (ONR, then part of the HSE’s Nuclear Directorate) provided information on the release. This multi-agency approach evolved rapidly during the initial part of this event with substantial and rapid code and system developments being led by the Atmospheric Dispersion and Air Quality group at the Met Office in collaboration with PHE, and ONR. The guidance provided by the modelling was then used in SAGE to inform decisions on advice provided by the UK Government to UK citizens and international partners.

Dispersion modelling of the radioactive material was carried out using the Met Office’s atmospheric-dispersion model, NAME (Jones et al. 2007). NAME is a Lagrangian dispersion model which tracks particles through a model atmosphere. Weather information is provided by Numerical Weather Prediction data and NAME applies a random component to the particles motion to account for turbulence. NAME is also able to model the radioactive decay and deposition of material on the ground. The genesis for NAME was the Chernobyl accident in 1986. Since then, NAME has been continuously developed and applied to a wide range of atmospheric dispersion events, such as volcanic eruptions, disease spread and fires.

The Met Office also provided dispersion model output to the International Atomic Energy Agency (IAEA) during the Fukushima -Daiichi accident in its role as a Regional Specialised Meteorological Centre (RSMC) with responsibility for dispersion modelling. As an RSMC, the Met Office can be called upon by any country in the European or African regions during a major atmospheric pollution incident under the World Meteorological Organisation’s (WMO) Emergency Response Activities Programme – one aspect of the Met Office’s wider international role as an RSMC. For incidents outside of this region, the Met Office continues to provide predictions but in support of the relevant lead RSMC. The Met Office response, along with those of the other RSMCs, is coordinated through the International Atomic Energy Agency (IAEA)

The Comprehensive Test Ban Treaty Organisation (CTBTO) maintains a global network of detectors that monitor for radioactive substances that would be released during a nuclear detonation. These were triggered several times following the Fukushima accident. The Met Office, alongside other national meteorological centres, provides the CTBTO with modelling output. NAME is run backwards for each of the detector locations provided by the CTBTO to show where the contaminant may have come from. By combining model results from several sensors and several organisations it is then possible for the CTBTO to identify the location where the radiological contaminant was released into the atmosphere.

Since the Fukushima-Daiichi accident the Atmospheric-Dispersion and Air Quality group in the Met Office has continued to develop the NAME model, the application of NAME for radiological releases and the processes to deliver essential information during an emergency response.

The multi-agency collaboration that occurred in response to the Fukushima-Daiichi accident to deliver advice to UK Government has since been developed, formalised, and embedded as an operational capability called Joint Agency Modelling (JAM) (see Millington et al, 2019 for more details). JAM’s strength is in the partnerships that have been formed between UK agencies bringing together the expertise, experience, and modelling capabilities. JAM’s function is to deliver a consensus view and impact assessment of the most likely and reasonable worst-case source release scenarios to the Scientific Advisory Group in Emergencies (SAGE). SAGE use this, and many other pieces of information, to advise the UK Government and thus provide guidance to shape the national response. This capability, like all the Met Office’s radiation responsibilities, includes ongoing research and development and is regularly tested and exercised to ensure that JAM remains robust in terms of modelling, process, and expertise.

Figure 3: Example JAM output for the first 48 hours after the start of the Chernobyl accident, showing potential areas for people to shelter indoors, for restrictions on leafy green vegetables and use of surface water.

In the 10 years since the Fukushima accident there has been considerable in-country and international collaboration; this has built stronger relationships as well as advanced scientific understanding. The Met Office had worked extensively with Public Health England on radiological dispersion modelling prior to Fukushima but the accident strengthened those links and since 2011, the Met Office and PHE have participated in knowledge sharing sessions, provided cross-agency training and worked together on several large projects. Similarly at a European level, the Met Office and PHE collaborated with IRSN (Institute de Radioprotection et de Sûreté Nucléaire, French Radiological Protection and Nuclear Safety Institute) and BfS (Bundesamt für Strahlenshutz, German Federal Office of Radiological Protection) to strengthen relationships, modelling links and communications.

The Met Office was also invited to contribute to both the 2013 and the 2020 reports on Fukushima carried out by UNSCEAR (United Nations Scientific Committee on the Effects of Atomic Radiation) reports on the Fukushima accident (citations). As part of the 2013 report, the WMO formed an expert task team consisting of scientists from the USA, Japan, Canada, Austria, Italy and the Met Office performed a multi model ensemble to assess the atmospheric and deposited contamination from the Fukushima accident (Draxler et al., 2015).

In recent years, interest has focussed on understanding and expressing the uncertainty in model predictions of the spread and impact of radiological releases. In a project commissioned by the Atmospheric Dispersion Modelling Liaison Committee (ADMLC), the Met Office and PHE worked with the University of Warwick to better understand how decision-makers in the UK used uncertainty information (French et al., 2019, French et al., 2016). Several recommendations came out of this report including the need standardise the presentation of information and the need to present a limited number of possible scenarios. The Met Office and PHE also participated in the CONFIDENCE project, a project that brought together over 30 European organisations with the aim of understanding, reducing and coping with uncertainty in meteorological and radiological data and their further propagation in atmospheric-dispersion, dose and food chain models. The project explored the key contributors to uncertainty in the meteorology, the release information and the dispersion model (Leadbetter et al., 2020). The project also highlighted the difficulties of communicating spatial uncertainty and the usefulness of presenting impacts such as the number of people needing evacuation (Korsakissok et al., 2020). 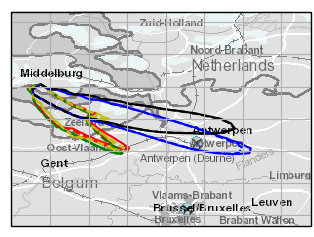 Figure 4: Regions where thyroid inhalation doses exceed 10mSv for a hypothetical release. The different contours represent the uncertainty in the meteorology.

Each event, study and collaboration leads to a better understanding of the dispersion processes or the application of NAME.

NAME benefits from the advances in NWP. As spatial resolution and the representation of atmospheric processes improves so does the quality of the meteorological data used in NAME. At the time of the Fukushima accident the Met Office's global model was running at a resolution of 25km. At this resolution there are only one or two grid cells between the Japanese coast and the chain of mountains in the centre of the island limiting the extent to which coastal and orographic impacts on the wind direction are represented. Today the global NWP runs at a resolution of approximately 10km (and 1.5km over the UK) providing much more realistic wind fields around coastal features and smaller hills as well as large mountain ranges.

However, the increase in meteorological resolution also provides challenges. Wet deposition is particularly important when modelling a radiological release. This is a highly efficient process for removing radiological material from the atmosphere and depositing it through precipitation. As NWP models have increased in resolution so has their ability to represent small regions of heavy precipitation which when combined with dispersion models results in regions of high radiological activity requiring protective actions to be put in place. Work has been done to demonstrate the importance of using accurate precipitation data (Leadbetter, 2019). In addition, since Fukushima improvements have been made to the wet deposition parameterisation scheme to better represent the impact of size of the released particles on the efficiency of wet deposition (Webster and Thomson, 2017).

For NAME to be used during an emergency response, it needs to run quickly. There is a balance between adding complexity to the modelling and timeliness of delivery of output. The introduction of parallelisation into NAME around the time of the Fukushima accident led to significant advances in runtime. This area continues to be developed and in 2019 and 2020 NAME there were further significant upgrades to the parallelisation and therefore speed of NAME.

Not all radiological releases are from a Nuclear Power Plant or even a known source. NAME has been utilised to model the dispersion of radioactive material released by fires in the forest of the Chernobyl Exclusion Zone on several occasions, including during 2020 when the fires were particularly extensive. Collaboration and adaptation of existing modelling processes were key to estimating the radiological material released, modelling the spread through the atmosphere, the deposition to the ground and the potential impacts. The assessment showed that impacts from the 2020 fires, and similar events, were small and limited to the local area.

There have been a few instances where radiological material has been detected, but there has been no known release. Such a situation occurred in autumn 2007 when Ruthenium-106 was detected across a large area of Europe. Following this incident, a collaboration with the University of Bristol was initiated that resulted in the application of an inversion technique to identify possible locations of the release (Western et al., 2020a). This highlighted the value of combining information from modelling and measurements to analyse a situation and led to a successful workshop (Western et al, 2020b) and ongoing discussions on how to exploit the information available from both measurements and modelling.

The Met Office has been responsible for delivering radiological atmospheric modelling and expertise for emergency response since the Chernobyl accident. The modelling, processes and expertise are continuously evolving. The Fukushima accident itself triggered a step change in collaboration within the UK and internationally between organisations keen to learn lessons and improve capabilities to model and respond to radiological incidents. It has fostered research into the expression of uncertainty in model outputs and into atmospheric-dispersion processes such as wet deposition. The Joint Agency Modelling process, born during the Fukushima accident, has become a UK operational capability to deliver support to the UK Government for a civil nuclear power plant accident anywhere in the world.

Future work includes the quantification and communication of uncertainty, the combined use of modelling and measurement data, the ongoing developments of the NAME model and expansion to model a wide range of radiological sources. This will further enhance the capability of the Met Office to deliver key guidance by operational meteorologists in the Environmental Monitoring and Response Centre (EMARC) and scientists in the Atmospheric-Dispersion and Air Quality group during radiological incidents.