Advances in methods and modelling have found substantial benefits of methane removal for global climate and air quality.

Methane (CH4) is the second most important anthropogenic greenhouse gas, responsible for about 0.5oC of the current climate warming (ref IPCC AR6 SPM).

It is emitted naturally by sources such as wetland ecosystems, fires, and termites. Large amounts may also be emitted in the future if permafrost thaws or sub-sea clathrate deposits are destabilised.

It is also emitted by a range of human activities including agriculture, burning fuel, and waste management.

It is a more powerful greenhouse gas than carbon dioxide (CO2), but lasts a much shorter time in the atmosphere before being oxidised.

Recently, atmospheric CH4 has begun increasing strongly again after a short plateau from the 1990s to 2006. Anthropogenic emissions - potentially from animal farming, landfills and waste - are thought to be behind this, but a full attribution is still not fully agreed on (IPCC AR6 Chapter 5).

Because mitigating anthropogenic emissions of CH4 is uncertain this century, and sudden releases from the Arctic or elsewhere cannot be excluded, technologies for CH4 removal or oxidation may be required. Jackson et al. argue that a research agenda for CH4 removal is needed and outline some considerations for such an agenda. One suggestion is a proposed Methane Removal Model Intercomparison Project which would allow comparison of new models with capability to simulate the interactive CH4 cycle. Abernethy et al. show results from the first such model.

Despite its importance, climate models have, to date, not treated the full CH4 cycle as part of the Earth System which they simulate. Instead, prescribed pathways of the amount of methane in the atmosphere are given to them as boundary conditions.

The UKESM1 climate model breaks this mould with a brand new capability to assess the forcings, feedbacks and interactions between human activity, natural sources, atmospheric chemistry and future climate change. In this Research News we explain how the new model works and show some exciting new results and research directions.

It is widely accepted that reducing CO2 emissions alone is likely not enough to achieve the challenging goals of the Paris Agreement, with some degree of carbon dioxide removal (CDR) or negative emissions required to reduce carbon amounts. Such negative emissions not only are required to offset residual CO2 emitted but also to compensate for hard-to-abate emissions of other greenhouse gases such as CH4. Even under strong mitigation scenarios, anthropogenic CH4 cannot be fully eradicated (Figure 1). 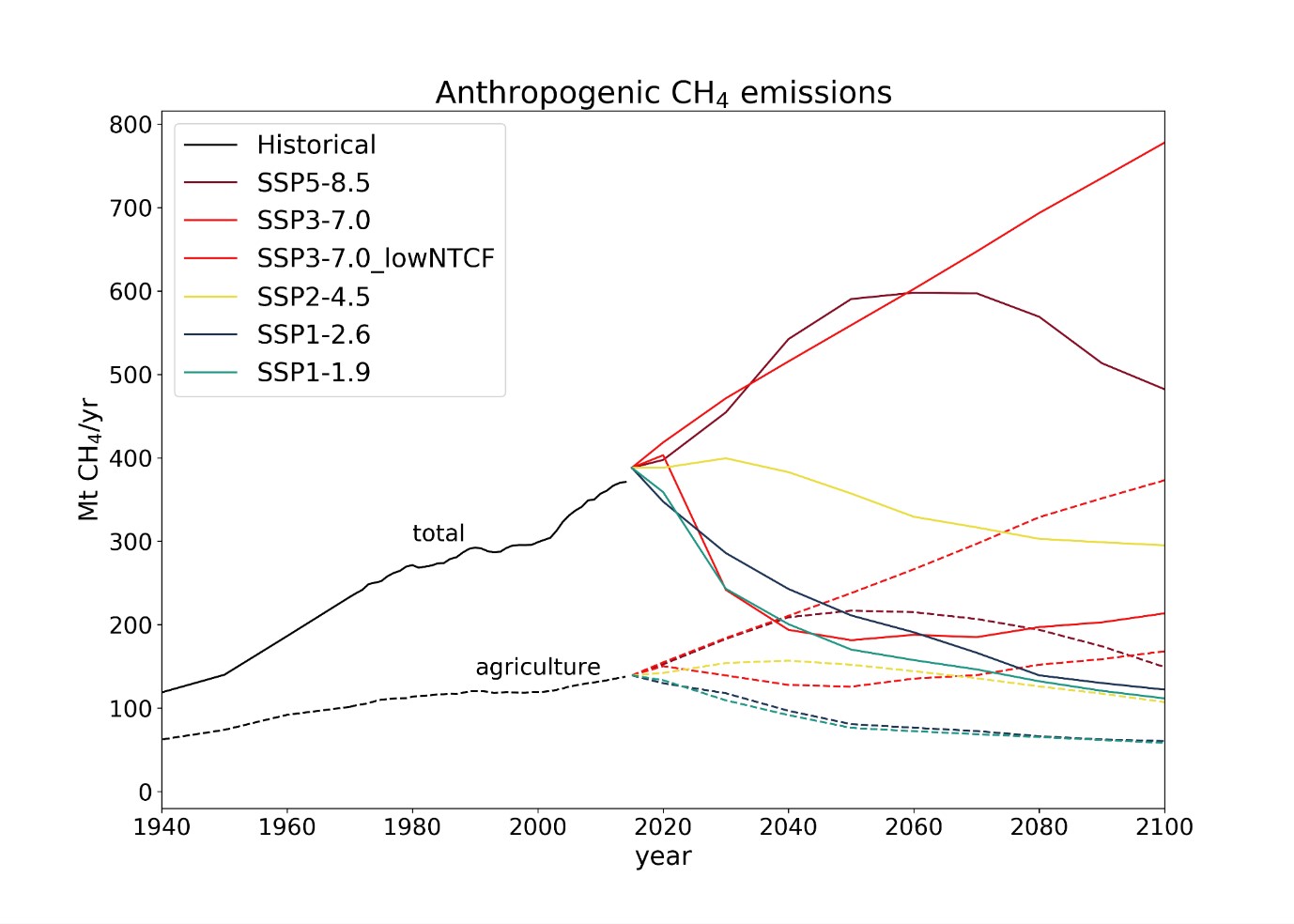 Therefore, actively removing other greenhouse gases such as CH4 could be extremely valuable in reducing future reliance on CDR, but options to do this have received much less research attention.

Technology developments are at a stage where this should be seriously considered as a new strand of climate mitigation. It may be possible, and energetically favourable, to remove CH4 directly from the air. Jackson et al discuss aspects of several technology options (Table 1), while Abernethy et al. addresses the question of how quickly this would affect the climate and other impacts such as air quality.

CH4 removal has at least two key benefits: reducing temperature more rapidly than CDR and improving air quality through reduced surface ozone concentrations. For the first time, the results in Abernethy et al. quantify the climate and air quality co-benefits of CH4 emissions removal and negative anthropogenic emissions, including different rates and timings of removal (Figure 2). Abernethy et al. define a novel metric, the effective cumulative removal, and use it to quantify the Methane-Climate and Methane-Ozone Responses. Their results also demonstrate the effectiveness of CH4 removal in delaying warming thresholds and reducing peak temperatures, and allow for direct comparisons between the impacts of CH4 and CDR that could guide additional research and future climate policy.

Figure 2. Surface temperature and ozone reductions are proportional to effective cumulative methane removal. (Shades of blue indicate different amounts of removal and shades of green indicate different timings of removal.) Both global temperature and ozone levels respond to the cumulative removal in very similar ways regardless of the time pathway of the removal. Reproduced from Figure 2 of Abernethy et al.