For over 100 years, advanced mathematical techniques have been used for weather prediction.

Today, numerical weather prediction (NWP) is an advanced discipline which uses some of the world's largest supercomputers to solve complex nonlinear differential equations. The forecast skill of these models has been improving over time, through scientific and technological development of both NWP models and computers.

The success of deep learning techniques over the last decades has opened up a new avenue of research for weather forecasting. New research from Mariana Clare, Omar Jamil, and Cyril Morcrette, takes the novel approach of using a neural network to predict full probability density functions at each point in space and time rather than a single output value, thus producing a probabilistic weather forecast. In this work, researchers take a purely data-driven approach and use residual neural networks to create 3- and 5-day hindcasts. They have found that stacked convolutional residual neural networks trained on 36 years of re-analysis data can predict global probabilities of 850 hPa temperature and 500 hPa geopotential on 600 km scale with skill out to 5 days.

Lead author Mariana Clare, a Mathematics of Planet Earth PhD student at Imperial College London who was seconded to the Met Office has said:

“When you upload a photo to social media and it automatically gets tagged as being a cat, dog, plane, or train, what’s actually happening is a convolutional neural network is classifying your photo. Our research shows that the same ideas can be applied to weather data”

The research starts by considering the range of possible temperatures and creating 100 bins of this range. This turns a continuous data problem into a classification problem. Researchers then trained their convolutional neural network to predict which bin the future temperature will be in at every location on the grid. The predictions aren’t 100% certain, so the network actually gives a range of possible outcomes such as a 50% chance of this bin, but also a 20% chance of that bin below and a 30% chance of that bin above.

Usually, to assess probabilities models are run dozens of times with different starting conditions and configurations, however, with the network used in this research predictions of probabilities can occur in one go. Of course, the network can also be run multiple times to get better statistics, but a single run will give an uncertainty range. 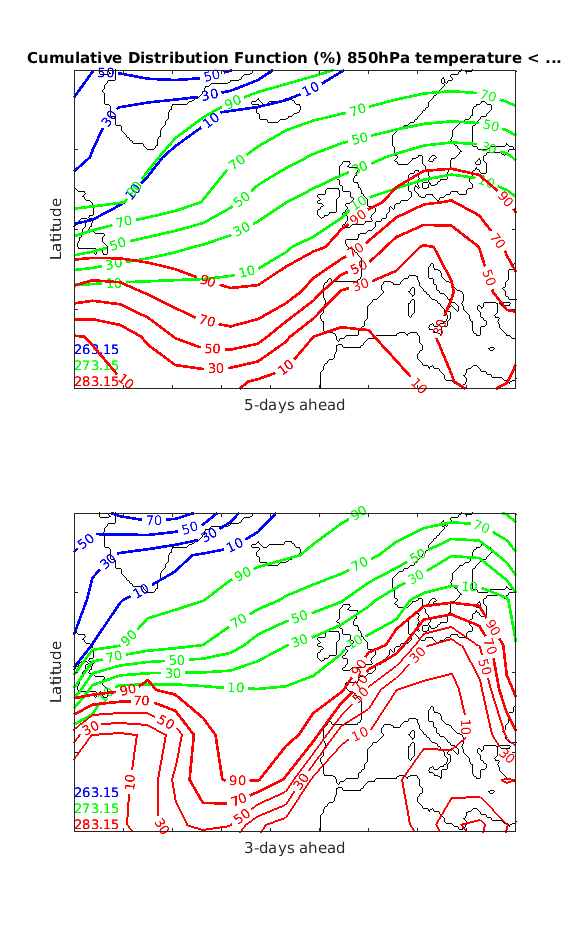 Figure 1. Cumulative distribution function showing the percentage probability of the 850 hPa temperature being less than -10, 0 or +10 degrees C, for hindcasts 5 or 3 days ahead, both validating at 00 UTC on 17 Oct 2017 during Storm Ophelia.

“The other neat thing we’ve done is that we haven’t just thrown all the input data in the neural network at once. Our inputs include the current temperature, humidity, horizontal wind and so on, all on a global grid and all at multiple heights in the atmosphere. So that’s a lot of data! We’ve found instead that we can train one neural network using mainly temperature inputs, then another separate network using mainly humidity inputs, then another on wind and so on. We then take all those predictions and create a stacked network that learns how best to combine all those individual predictions. In terms of complexity and memory, that’s a much easier problem and it reduces the need for sophisticated hardware.”

The Future of Forecasting

So, is this the way forecasts will be done in the future? Cyril Morcrette, co-author from the Met Office says:

“It’s an interesting start, but we will still be using our conventional methods for many years to come. What we’ve done so far is fairly simple. We’re only predicting temperature at 850 hPa, so that’s about 1 mile above the surface, and geopotential at 500 hPa, which represents the horizontal wind a few miles up. Doing that skilfully is great, but it’s still a long way from what we need in a forecast. For example, the general public needs to know temperature, rain, snow, and wind much nearer to the ground, while the aviation sector, say, needs the wind speeds at all heights. Also, the forecasts we’ve got here are pretty coarse. There’s a data point roughly every 600km. So, like having one in London and one in Edinburgh, with nothing in between. For a useful forecast, we need a lot more detail than that. There’s no reason that our neural network couldn’t make accurate predictions on a finer grid, but it would require a lot more computational power.”

Something else to note is that to start the forecast, information regarding the current state of the atmosphere is needed. The approach that meteorological centres take is to use thousands of weather observations (e.g., from satellites and surface measurements) and blend them into a previous forecast valid at the same time. That previous forecast relies on having a model that predicts all the required variables at all the heights, something that this neural network is not yet able to do.

“We have some skill for forecasting 3 days ahead, but even when trying to predict 5 days ahead we notice a drop-off in accuracy. With further work, we could get better skill for a few more days, but beyond that it gets more complicated. This is because for the 3-day forecast the atmosphere has not changed too much from its initial starting point, but for longer forecasts, new weather systems are developing or decaying, and interacting and affecting each other.”

It is likely therefore that in the future, neural networks and other deep learning methods will act in complement to conventional weather forecasting methods, rather than replace them. However, this work is an interesting proof of concept of the valuable extra insights that can be gained by using these deep learning techniques and continues to contribute to the ongoing learning of researchers in the field.

Click here to read the full research paper, published via the Quarterly Journal of the Royal Meteorological Society.