Freya is a Scientist in the UK Climate Resilience team. 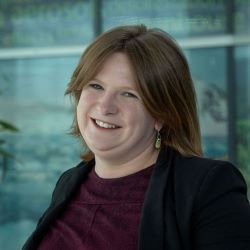 As a member of the UK Climate Resilience team, Freya studies projections of future UK climate change to understand how climate change will affect UK sectors such as agriculture. Freya analyses projections of various multiple hazards that will affect people in the UK over the coming century and develops risk projections for different sectors due to multiple hazards. It is important to understand future risk from increased extreme weather or other changes to the UK climate to help society make decisions about how to stay safe and thrive. Freya’s work contributes to a UK wide project on Climate Resilience, the Strategic Priority Fund for Climate Resilience.

Freya is passionate about promoting diversity and inclusion across science and is involved with diversity initiatives in Exeter. Freya co-founded the Women in Climate network at the University of Exeter and has helped run some joint events at the Met Office. Freya is also involved in the PRISM Exeter network and is a keen climate science communicator, for example, Freya participated in the Climate Stories project, using various art forms to communicate climate science. Freya is a STEM Ambassador at the Met Office, participating in outreach activities to encourage students to study STEM subjects.

Freya started studying the climate whilst doing an integrated Master of Oceanography degree at the University of Southampton, completing the course with first class honours and graduating with the top grade of the year in 2013. Freya received an IMarEST undergraduate scholarship and the Southern Joint Branch of RINA and IMarEST prize for excellence on IMarEST accredited courses in 2013. Freya started working with the Met Office during their degree by undertaking a summer internship in 2012 on Atlantic oceanography, which subsequently led to their first peer reviewed publication. In 2013, Freya commenced a PhD at the University of Southampton, partly funded by the Met Office, to understand deep ocean temperature trends. Freya’s PhD research formed a significant part of one of the 2018 Met Office synthesis reports for the AtlantOs Horizon 2020 project. In 2017, Freya graduated from the University of Southampton and moved to the University of Exeter to work as a postdoc on the ‘Climate of the Last Millennium’ project in partnership with the Met Office, which also involved studying the oceans and climate change over the centuries. In 2019, Freya started working at the Met Office in their current role.

Freya is an experienced communicator and has lectured for summer schools on paleoclimate and ocean science at the University of Cardiff (2018) and University of Exeter (2018 and 2019). Freya co-coordinated the NERC Advanced Training Course ‘Oceans in Weather and Climate’ held at the Met Office in 2016 and taught the practical sessions again when the course was re-run at the Met Office in 2018. Freya represented Geography at the University of Exeter talking to schoolchildren for Britain Needs Scientists 2018 and was a Brilliant Club Tutor during 2018, teaching climate science in a programme that aims to increase the number of pupils from underrepresented backgrounds progressing to highly selective universities.