Ségolène manages the work to promote, plan, accelerate and pull through to operation of environmental prediction capabilities. 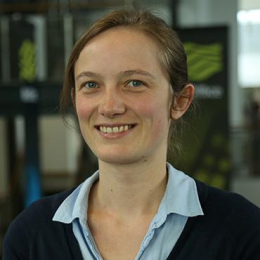 Ségolène is currently leading activities of the Regional Environmental Prediction collaboration, to accelerate the pull through and integration of national-scale high resolution environmental prediction capabilities. This brings together scientists and software developers working at the Met Office and in partner organisations, across modelling aspects of the atmosphere, ocean (including currents, waves and biogeochemistry) and land surface (including hydrology).

Ségolène joined the Met Office in 2016 in the Hadley Centre, bridging the gap between global and regional high resolution climate modelling. She contributed to the evaluation of the first km-scale regional climate model in Africa (within AMMA-2050) and the first multi-model ensemble over sub-regions of Europe (within EUCP and CORDEX-FPS convection). These models allow better representation of convective showers and thunderstorms. Therefore, they improve the hourly precipitation distribution in summer and autumn over Europe and the hourly and daily distribution of rainfall in tropical Africa. With climate change, extreme precipitation is likely to increase in most regions and seasons, and these models usually show stronger increases.

Ségolène completed her PhD at Laboratoire de Météorologie Dynamique with Philippe Drobinski and Sylvain Mailler on the impact of sub-monthly variations of sea surface temperature on heavy precipitation in the Mediterranean. The PhD was part of the Hydrological Cycle of the Mediterranean experiment (HyMeX) and MedCORDEX projects.