Phil is an applied statistician who develops advanced models to better understand the impact of weather and climate on industry operations and infrastructure. 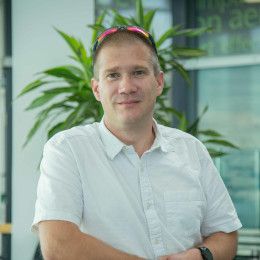 Phil is a senior statistical scientist in the Industry Science & Consultancy team.  He works closely with industry partners across multiple sectors (including water and energy) developing statistical modelling approaches to help them better understand the impact of weather and climate on their operations and infrastructure.  Phil is a Bayesian statistician specialising in hierarchical modelling and state-space methods.

Phil joined the Met Office and the Industry Science & Consultancy team in March 2022. Prior to this he spent eight years as a Research Fellow at the University of Exeter working on various aspects of statistical climatology. As a researcher, Phil’s primary interest was statistical methods for analysing multi-model climate projections. He developed time-series methods for constraining future climate projections by combining observations with simulations from multiple models and a graphical tool for uncertainty quantification in emergent constraints on the climate system. Phil also worked with leading climate scientists from The National Oceanic and Atmospheric Administration (NOAA) to develop ensemble post-processing methods to improve the performance of seasonal and decadal weather forecasts. He went on to develop state-space time series models for diagnosing drivers of predictability in seasonal forecasts applied to predicting the North Atlantic Oscillation. Phil has also developed automatic methods for extra-tropical cyclone and front identification and studied the impact of warming on extreme precipitation in different storm types.

Phil completed a PhD in statistics at the University of Exeter in 2014. Prior to this he spent six years at the Health Protection Agency (now the UK Heath Security Agency) working as an infectious disease risk modeller. Phil was part of two European projects collaborating with leading mathematical modellers from across Europe to build joint capabilities. He developed a cluster detection tool for Legionnaires’ disease and modelled  anti-viral demand during the Swine Flu pandemic.