Simon's role is to lead and manage the Space Applications and Nowcasting strategic area of Weather Science. 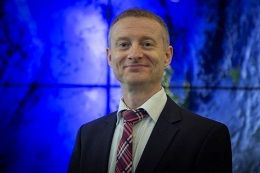 Before joining the Met Office Simon gained a BSc(Hons) in Physics with Astrophysics from the University of Leeds and then a PhD at the University of Southampton (National Oceanography Centre, Southampton), in the use of marine radiometers for the correction of satellite sea surface temperatures.

Simon began his Met Office career in 1999 after joining the Observations Development area as a support scientist focused on improving our marine and land surface observing networks. From 2003 Simon spent five years working as the ocean wind scatterometer scientist in the Satellite Applications branch. His most recent achievements in that area were the introduction of the MetOp-ASCAT and WindSat scatterometers into our Numerical Weather Prediction data assimilation system. In 2008 Simon joined the Ocean Forecasting Research and Development area, to take part in the MyOcean EC project. In 2011, Simon became the manager of the Satellite Data Products and Systems team, which he then led for almost a decade before spinning up a new area of the Met Office in 2020 (Space Applications and Nowcasting) that aims to improve our nowcasting and situational awareness capabilities through our improved use of observations. Throughout his career he has been an enthusiastic member of the Institute of Physics.