What is an ensemble forecast?

Instead of running just a single forecast, the computer model is run a number of times from slightly different starting conditions.

This means that we can never create a perfect forecast system because we can never observe every detail of the atmosphere's initial state. Tiny errors in the initial state will be amplified, so there is always a limit to how far ahead we can predict any detail.

To test how these small differences in the initial conditions may affect the outcome of the forecast, an ensemble system can be used to produce many forecasts.

How we do ensemble forecasts

Instead of running just a single forecast, the computer model is run a number of times from slightly different starting conditions. The complete set of forecasts is referred to as the ensemble, and individual forecasts within it as ensemble members.

Ensemble forecast systems are designed so that each member should be equally likely. The initial differences between the ensemble members are small, and consistent with uncertainties in the observations. But when we look several days ahead the forecasts can be quite different.

A schematic illustration of an ensemble forecast 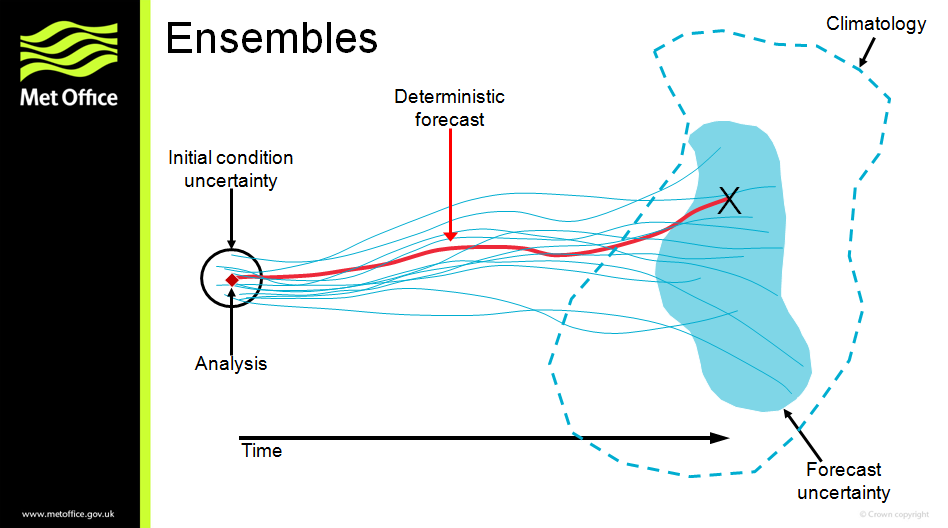 The ensemble forecasting system developed by the Met Office to produce these forecasts is called the Met Office Global and Regional Ensemble Prediction System (MOGREPS).