Forecast for July to November 2007

Ten tropical storms are predicted as the most likely number to occur in the North Atlantic during the July to November period, with a 70% chance that the number will be in the range 7 to 13. This represents below normal activity relative to the 1990-2005 long-term average of 12.4.

Note: The forecast is for the five full months remaining in the June-November Atlantic tropical storm season. There have already been two named storms - Andrea and Barry. 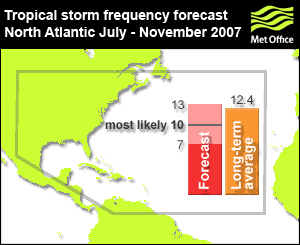 The number of tropical storms forming over the North Atlantic is influenced by sea-surface temperatures (SST), over both the tropical Atlantic, and the tropical Pacific.

At the start of every North Atlantic season (which usually runs from June to November) the Met Office forecasts the number of tropical storms expected throughout the period. This is done using a dynamical seasonal prediction computer model of the global atmosphere-ocean system called Met Office seasonal prediction system: GloSea4.

During the 2007 Atlantic season there was a total of 12 named storms in the July-November time frame. The Met Office forecast issued in June predicted 10 storms with a 70% probability range of 7-13.